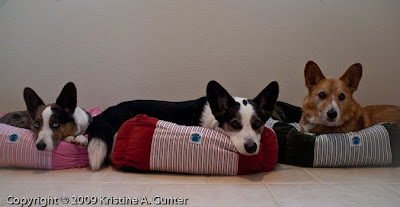 Zoey, Riley and Rugby live with their family Kristine and Eric in Portland, Oregon. 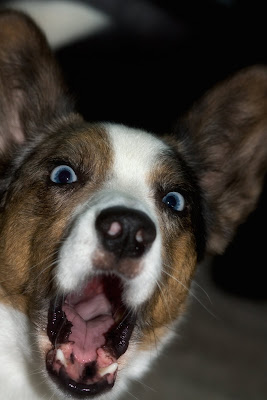 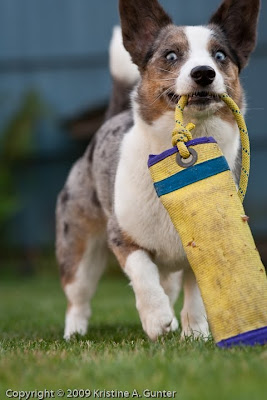 Kristine and Zoey have competed in obedience, agility, rally and herding, but Zoey’s current favorite sport is flyball. She runs as a full-time height dog for flyball team ‘The X-Fidos’. She also loves to perform tricks and has quite a repertoire of them, including jumping on a trampoline (http://www.youtube.com/watch?v=kHQ8mkICqp8). Zoey accompanies Kristine to work at Reed College every day, where she delights in entertaining the students (as well as staff and faculty) with her trick routine. “Sometimes I think it’s impossible to describe in words how much I adore this dog”, writes Kristine.

(Ed. note: that’s a photo of Zoey on the blog’s right hand sidebar, the one where she’s “saying” Calling All Corgi People!)

Rugby was born in March 1997 and was Kristine’s first Corgi. “He’s never been a particularly easy-to-live with dog, but I love him with all my heart nonetheless.” Rugby was the first of her dogs to train and compete in all the various dog sports Kristine loves. Before retiring from competitions in 2007, Rugby earned 21 titles in a number of sports. His ‘official’ name is: Cayuse Rowdy Rugby, CD, RE, AXP, AJP, O-OAC, OJC, NJC, TG-N, TN-N, W-FD (MF), R1-MCL, TG1, FFXG. 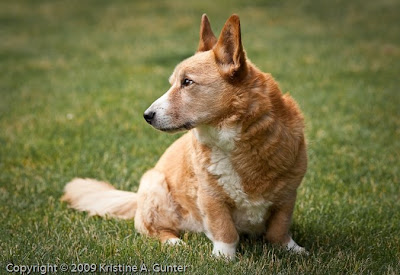 The highlight of his performance career came at the last show he ever participated in: the 2007 Cardigan Corgi national specialty. Rugby won 3 of the 4 rally obedience classes Kristine entered him in. “It was truly a very special accomplishment and a wonderful way to usher him into retirement.”
Yay, Rugby! 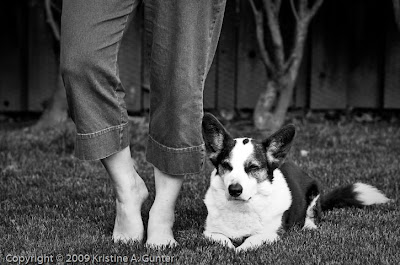 Riley was born in June, 1999. As Kristine’s second Cardigan, he got chauffeured around to all the events and shows she took Rugby to. Eventually she decided Riley might also enjoy competing in obedience and agility, so she began training and trialing him. Riley’s “laid back” personality kept him from ever being a stellar performance dog, however, and after a couple of years of showing him, he retired from competition at the ripe old age of five years. 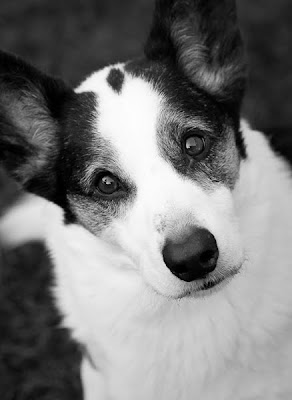 Realizing he still needed a ‘job’, Kristine began teaching Riley tricks and soon learned this was where his talents truly lay. In 2006 he appeared on, “The Tonight Show with Jay Leno” where he could be seen riding his skateboard down the hallway outside Kristine’s office at Reed College (http://tinyurl.com/ylgkrrc). In 2007, Riley won second place in a national dog trick competition by slam-dunking a basketball. Riley’s ‘official’ name is: C-Myste Kamikaze, CD, RA, OAP, OJP, NAC, CGC.
Kristine and Riley also appeared on AM Northwest where Riley performed tricks and charmed everybody’s socks off.
* * * *
Kristine is an avid dog photographer, writer and trainer. Learn more about her marvelous work at http://www.cardigan-corgis.com/. There are some truly terrific photos in her blog, not just of Corgis but many different breeds. For dog lovers, these snapshots are visual poetry. Just gorgeous, some of them heart-stoppingly so.
Check out the cool ankle tattoos Kristine has of Zoey, Rugby and Riley!
* * * *
Welcome to The Daily Corgi, Zoey, Rugby and Riley.
You guys ROCK!

Ten year old Frankie stakes out his favorite spot on the couch. Flooftastic.   Jasper still looks a lot like a puppy, but he ... END_OF_DOCUMENT_TOKEN_TO_BE_REPLACED