Last week was Official Jasper Islington Week on The Daily Corgi. This distinctive Pembroke Welsh Corgi’s fame increased, his followers grew, and his Folk Hero status was cemented when Facebook muzzled his page for two months on grounds of spamming. 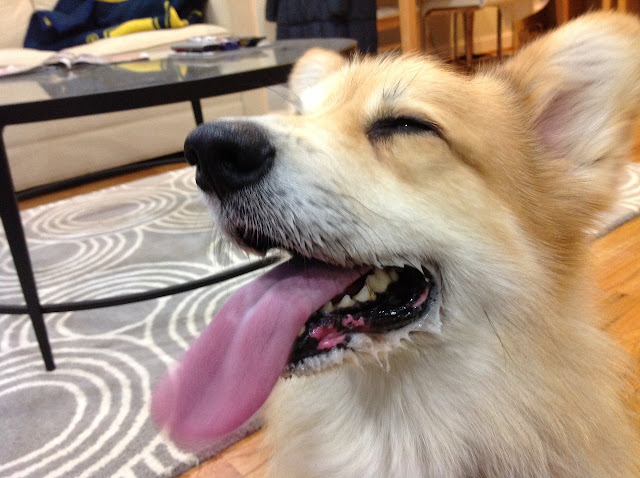 Clearly they knew nothing about the joy of Jasper-ology.

An important part of his story has been concealed to many.  Until today. Ladies and gentlemen I give you Joe, known to his famous fur son as “Da”. 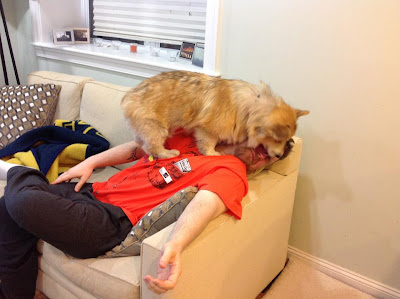 Simply put, Joe is the man behind the empire. Hidden by the haikus, the fluff factor, the mega mitts and the deep, dark pools of Jasper’s melt-o-matic peepers … he’s there. And he’s a GUY. (I did mention that, right?) Show of hands: how many of you are surprised by that fact?
Funny thing about Corgi Nation. So many of us are female. At least the chattier ones. Ladies, you know it’s true. Not that there aren’t Corgi loving men with something to say. (Bacon Man, here’s looking at you!) They’re just in the minority. A proud minority, a vocal minority (hey there Hal), but a minority. So although you don’t know Joe (he is absurdly modest), after today you’ll know more about him, by way of his number one son — the one and only Jasper Islington. 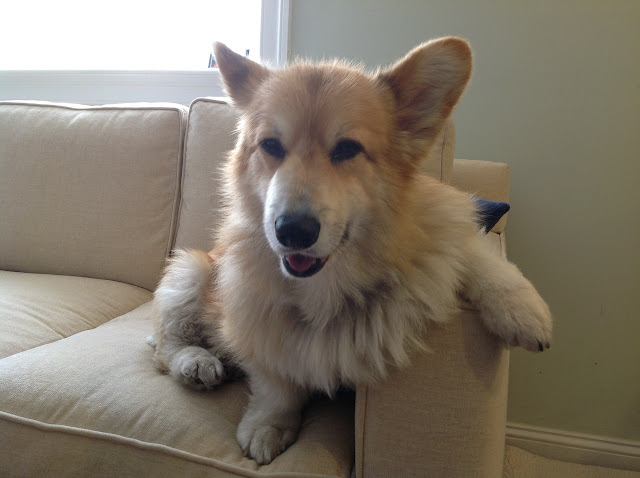 Yep, back to me. Where the focus belongs!
Like many a proud Da, Joe demurred and deflected questions about himself when asked to write a piece for the blog, but an appeal to paternal pride brought out the best in him. “Tell me what it is about Jasper that makes you want to share him with the world. What’s the effect he’s had on you?”
With that, Joe was off and running. 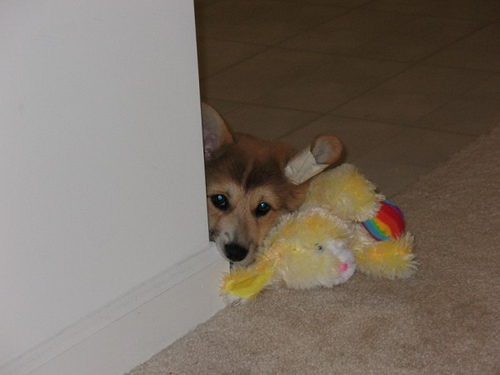 “When we brought Jasper home in March 2008, it didn’t take long for us to realize that a Corgi pup was quite a handful, and soon abandoned our plan to adopt a kitten and a pup together.” 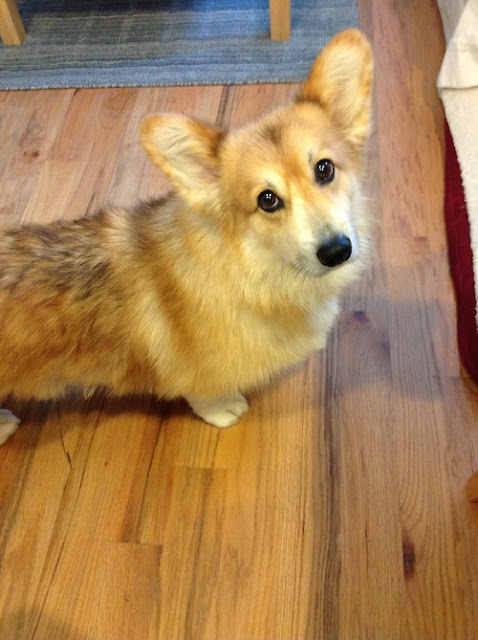 “The
thing I was least prepared for, and my favorite thing about Jasper, is
his personality. Combine that with some of the most expressive and
soulful eyes I’ve even seen and you can understand why I take so many
pictures. For whatever reason, he was a VERY serious puppy. He
didn’t smile for a long time and I found that endlessly entertaining. I
started imagining what was happening in his head to go with his very
serious looks, and that’s when the captions began.” 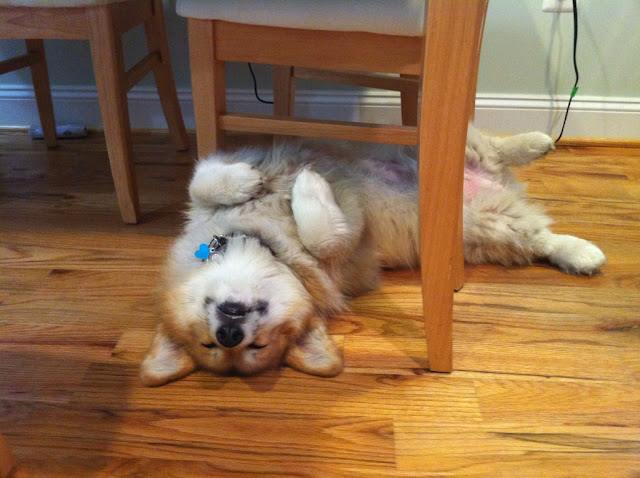 “At first it
was just between my wife and I, then family, and then I heard about
someone creating a page for their pup on Facebook. That’s when the
insanity really began. I created a page for Jasper the same day and
started posting a picture a day, trying to share what I thought was
going through his head. Jasper’s page is exactly that: a place for his thoughts, told
from the first Corgi perspective.”
“To be honest, it’s Jasper that
makes this such a joy to do. As he’s grown into the five year-old little
man he is today, his personality has developed too. I can tell when
he’s in the mood for pictures and when he’s not. He isn’t very subtle and will simply get up and walk away, or wait until I have the
perfect shot lined up. Then he gets up and licks the camera.” 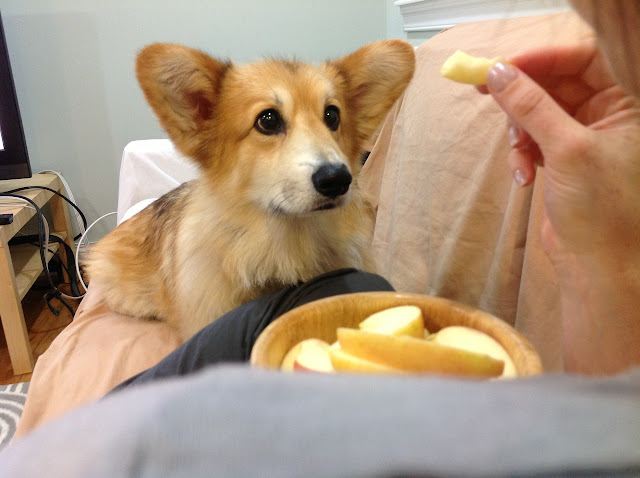 “When he’s
a willing partner, it is a ton of fun. While I’m sure I’m rather
biased, there is just something about his face and eyes that makes him
perfect for droll and witty captions. At the same time, it’s that
seriousness that makes the silly captions even funnier.” 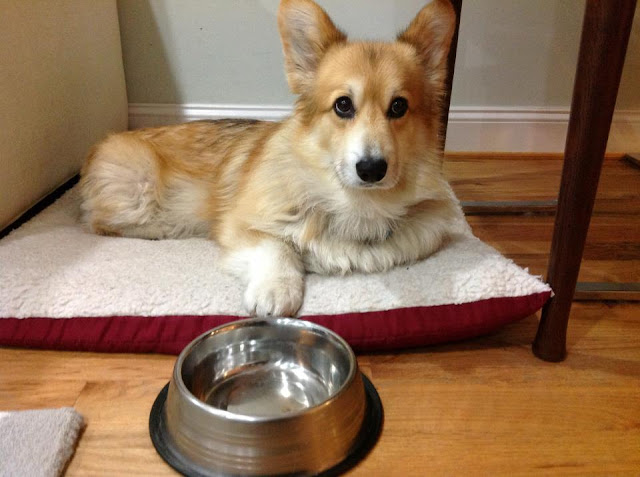 “Jasper is a
very sensitive to routine. As such, his body knows EXACTLY when it’s
dinner time. He’s not one to beg. He’s more adept at psychological
manipulation. He’ll stare at me, then at his empty bowl, and then back
at me until he knows I’ve gotten the message. This led to his Pre-Dinner Haiku series, which has been a whole lot of fun.”
“This
is a great example of what Jasper has given to me: a fun creative
outlet I absolutely would not have found on my own. It anybody told
me I would be publishing any kind of poetry in a public place, I’d have thought they lost your marbles. Yet here I am, having a blast and really
enjoying the feedback and dialogue with Jasper’s fans.” 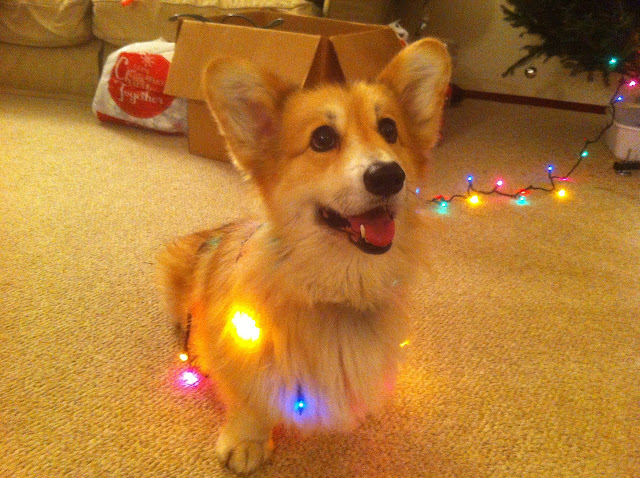 “The unexpected levels
of closeness, support, caring and community have
been amazing. I have grown to know a number of people from all over the
world,
both Corgi owners and those who just love the breed. Eighty-four countries to be exact! It’s been a wonderful experience so far and I can’t wait to see what happens next.”

Ten year old Frankie stakes out his favorite spot on the couch. Flooftastic.   Jasper still looks a lot like a puppy, but he ... END_OF_DOCUMENT_TOKEN_TO_BE_REPLACED