Virginia Di R. and her husband had never owned, but in 1996 they decided they were ready for a puppy.
“We made arrangements to get a Toy Fox Terrier from a place in Lancaster, and when we arrived with our little dog leash and bed, we were horrified to see that it was a puppy mill and that all the puppies had died of parvo. Undeterred, we went to a puppy store claiming to be “breeders’ representatives” and saw the most adorable Corgi puppy. She was 14 weeks old and so sweet.” 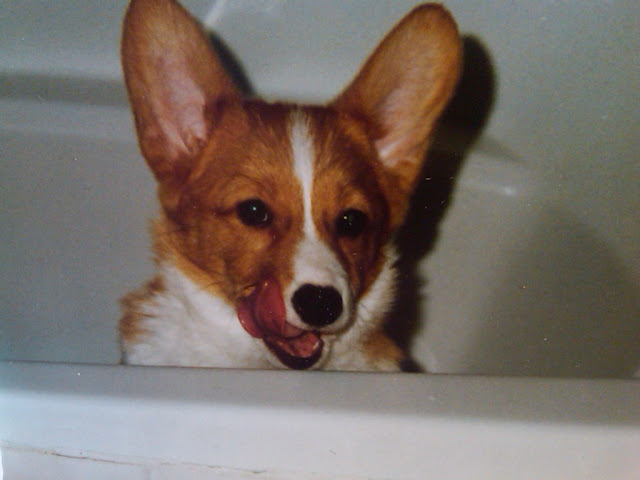 “We named her Bailey and we brought her home, where she slept in our master bathtub since we hadn’t bought a crate yet.  She was a cute bundle of fur and quickly became our substitute baby, although she was very neurotic with more phobias than you could shake a stick at.  In spite of her idiosyncracies (which included a fear of sticks, wrestling with the ironing board, avoiding any toy too close to the bi-fold door or on the other side of an electrical cord, and refusing to eat from a metal bowl or a china dish), Bailey was a snuggler and very devoted to both of us, as well as her her cushion on the sofa.” 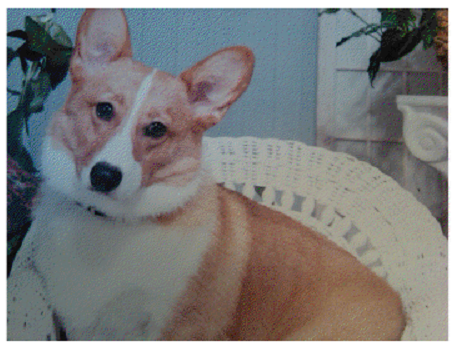 “Bailey loved to ride in the car and go on road trips. She’d lie on my lap and sleep for hours inside her king size pillow case, which kept her hair under control.”

“Everyone loved her and she was always a welcome houseguest. She liked parties and was very apt to stick her nose in your drink — especially margaritas and martinis. She enjoyed her Halloween costumes, among them Corgi Elvis, a dinosaur, a witch, and a queen. We’d answer the door for the trick-or-treaters and Bailey would be in full costume. Many of the children got “tricked” by Bailey, as she was an excitable pee-er and often left a puddle for the kiddies.” 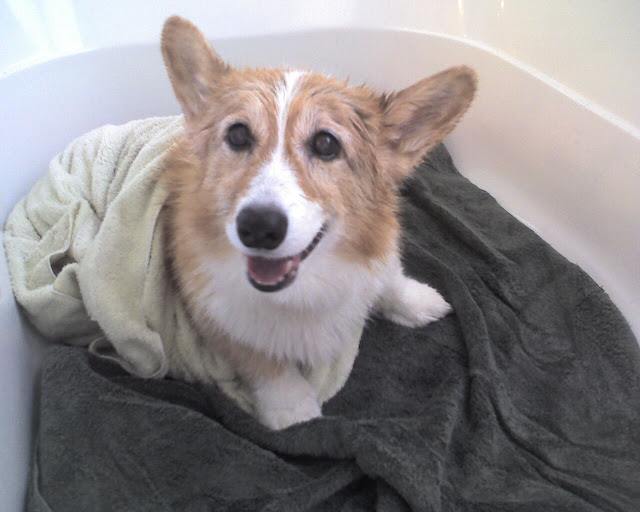 “Bailey hated being dirt, so she adored getting a bath and being spritzed with my husband’s cologne. It made her smell nice and the scent lasts longer than doggie cologne.”
“When she got to be about 12, we noticed that she was wobbling and walking like she had actually succeeded in drinking somebody’s martini. I talked to my vet’s office, and they weren’t particularly helpful. From what I’ve read on the internet, degenerative myelopathy (DM) is the last resort diagnosis; if it isn’t this or that, it must be DM. Over a period of about a year to 18 months, the wobbling went from limited mobility for her back legs and scooting along on the floor. The scooting was very hard on her back feet so we tried various dog shoes to protect her toes. The best ones we found were actually little balloon shoes called Pawz; she couldn’t get them off, and they stopped her feet from being scraped raw. We bought her a little cart which she hated and would wrestle her way out of usually tipping over in the process. I subscribed to the fantastic Wheel Corgi Yahoo support group. There are lots of resources on the internet for corgis with degenerative mylopathy and they were very helpful as we were going through it.” “We tried steroids, which only made her pee uncontrollably. We tried Rimadyl, which did nothing except ruin her appetite, and there is no pain with DM. We tried herbs on her food, which made her sigh in disgust. The best thing we could do for her was just to love her and carry her so that she could do what she loved best … be with us. Even when she could hardly walk, she was plainly still happy and we didn’t mind carrying her up and down the stairs or picking her up to be on the sofa with us.”
“A month or so after she turned 14, the DM moved up her spine and affected her urinary and digestive tracts. She slept about 20 hours a day or more, had no appetite and couldn’t control her peeing. We tearfully came to the decision that it was time for her to be in a better place.  The Wheelcorgi yahoo group was a huge help to me during her DM and my decision to finally let Bailey go in January of 2010.  It was a very sad decision but it was the right one.”
“I’ve found out since then that there is a genetic test for DM and that it could be eradicated with responsible breeding.” 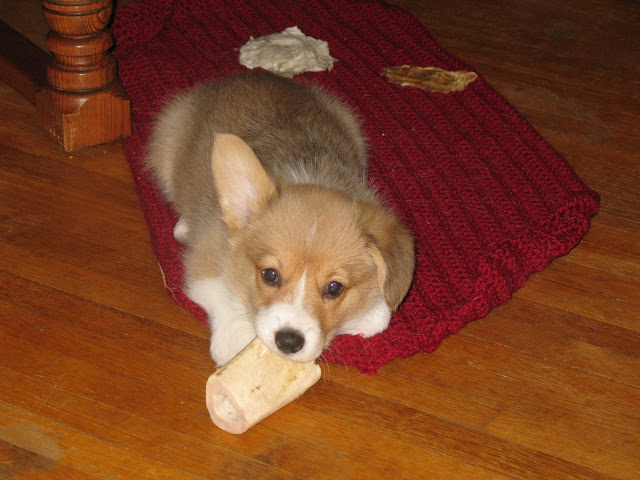 “After a very short time without her, we realized that we missed all that fur covered loving and didn’t feel complete without dog hair on our clothes.” 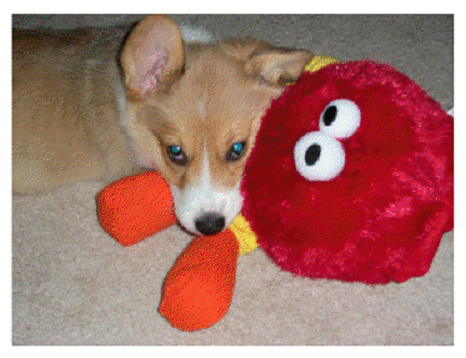 “We couldn’t live without our Corgi fix, so on February 13th we brought Gracie home.” 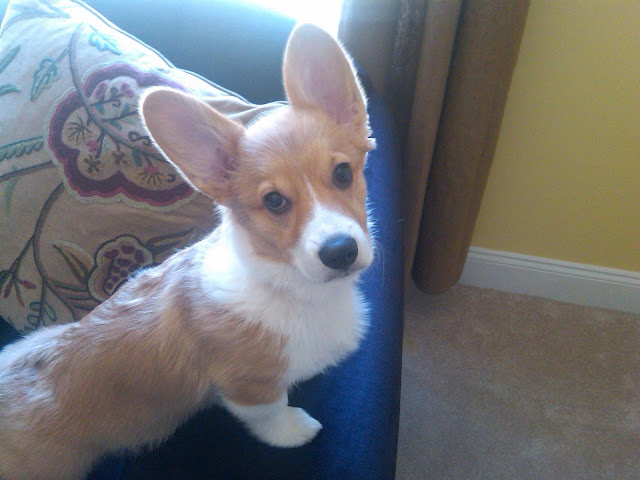 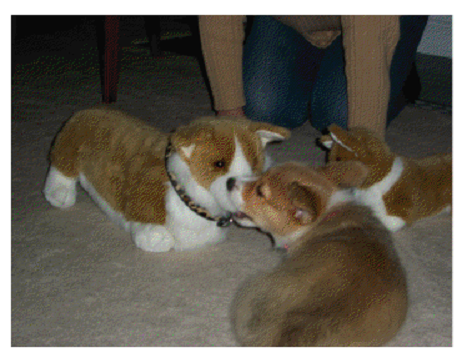 “Gracie was soooooo different from Bailey. Her favorite game was lick-lick-bite and watch out if you were the bite. Ouch those puppy teeth hurt!”
“She likes to chew her toys next to our shoes so she can sneak a taste of shoe when we aren’t looking.  Gracie is now in indestructible toy mode and all toys must be latex or some sort of thick rubber.” 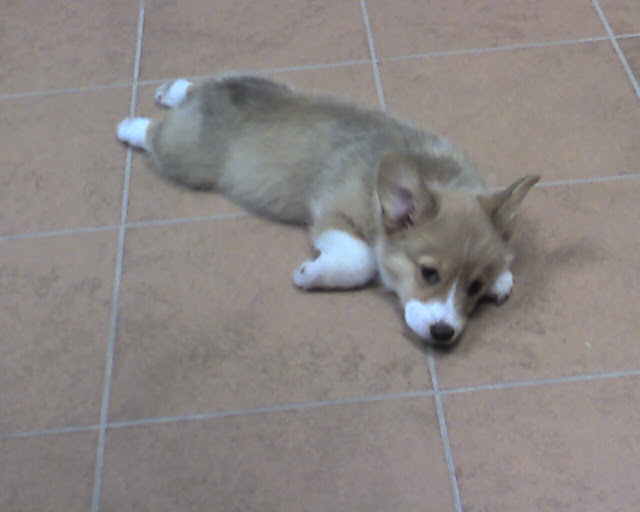 “I went on a short business trip and Gracie decided to pout in the laundry room until my return, completely ignoring my husband.   From that day on I campaigned to get Gracie a little sister.” 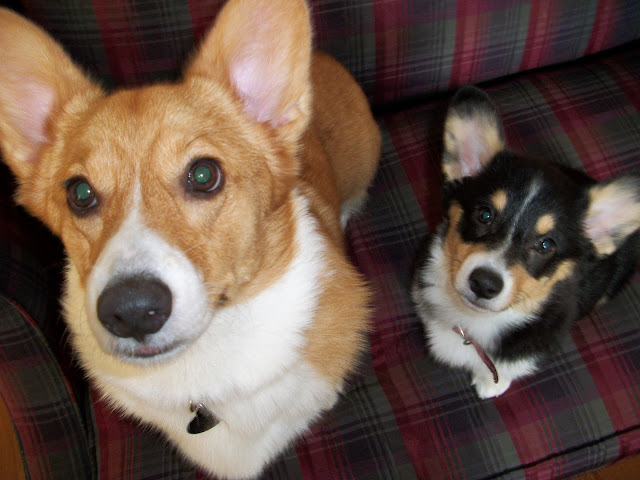 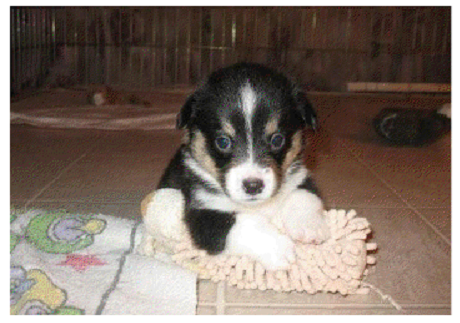 “She was the second smallest in the litter and is still smaller than Gracie at that age, but she is very intelligent and quite the little show off.” 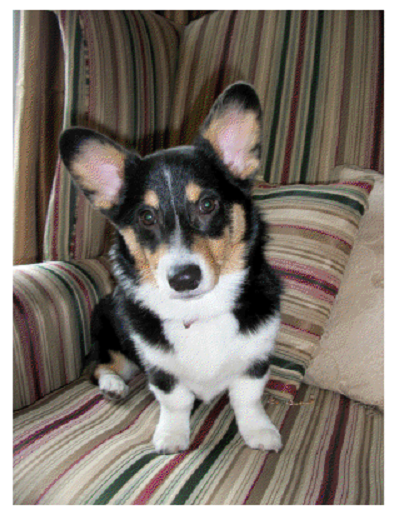 “Georgie is a snuggler and very smart; she passed her Canine Good Citizen test at 5 ½ months old.  She also has a feisty streak and has chewed a few things she shouldn’t have, including a silver dollar sized hole in the brand new oriental rug within 24 hours of it being in the house.”

“The two of them play constantly and are so adorable together!”
*  *  *  *  *
Talk about keepin’ it Corgi … you girl make it look easy peasy!
Just PEM-tastic!
“Joe finally relented and we brought Georgie home in early October. Little tri Georgie has the same Mom and Dad as Gracie, so they are true sisters.”

Ten year old Frankie stakes out his favorite spot on the couch. Flooftastic.   Jasper still looks a lot like a puppy, but he ... END_OF_DOCUMENT_TOKEN_TO_BE_REPLACED