I am fortunate to know so many great people, as a result of starting this blog. My friend Caryl Bahner-Guhin is one of them.
She’s a Corgi Mum (of three), founder of Llyr’s Fire, and one of those special people who helps rescued Corgis in need. With her steady presence and impassioned voice in the on-line Corgi community, she has sustained and strengthened so many. 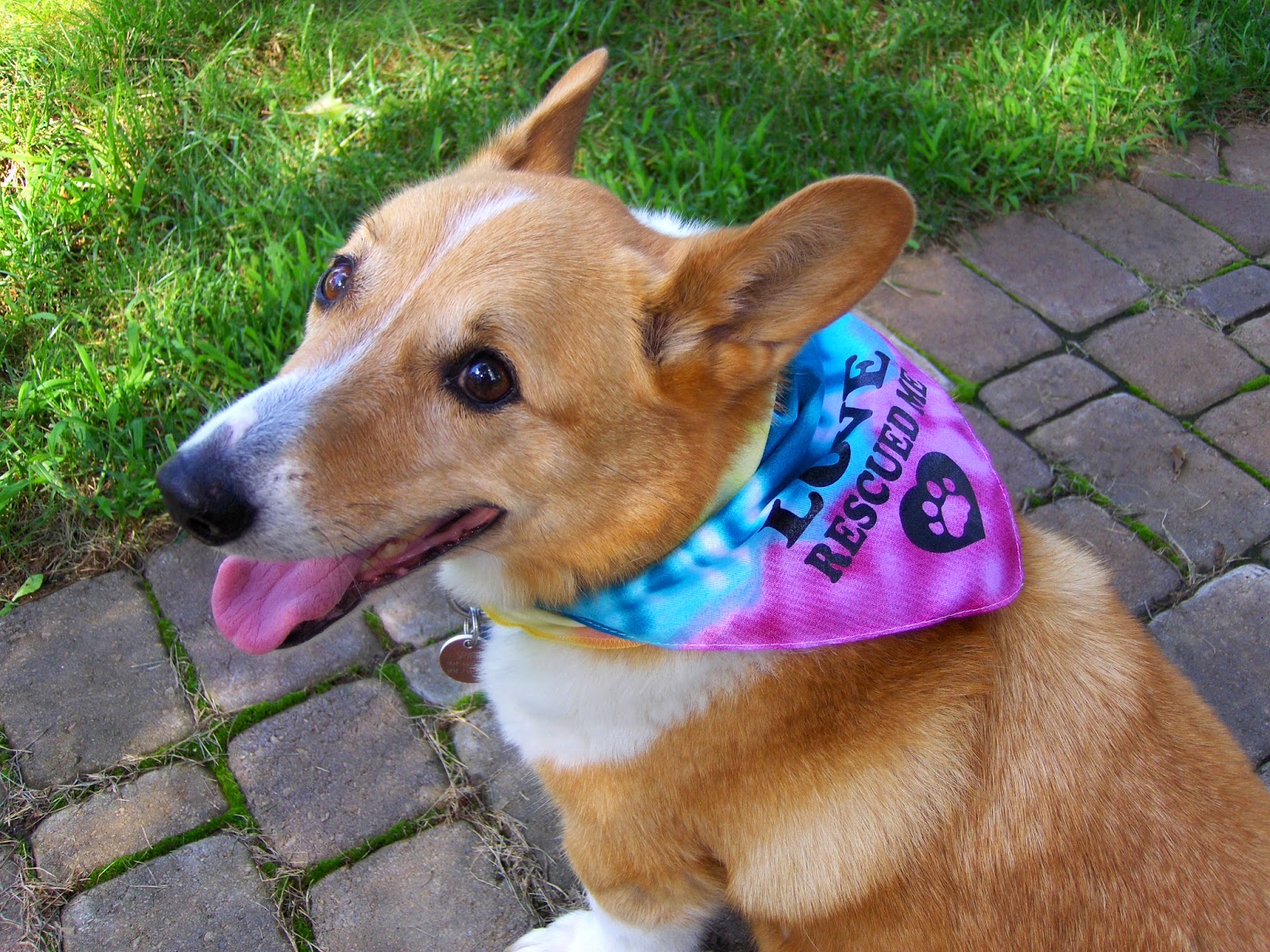 (Including yours truly!)
Today, I’m pleased to have a guest post from Caryl on a dog named Spike who has come a long way — with a little help from a lot of friends. Spike made his Daily Corgi debut back in March, after an earlier appearance on the Daily Corgi Facebook page. He was a dog in real need, and so many of you gave to help him rally. Got him back his sight and gifted him with the new life he deserves.
Think one person can’t do much? No link in the chain is too small. This is how it happens. How we become the good we wish to see in the world.

A Holiday Update from Spike

Hello Corgi Nation! Caryl here with an update on Spike. Remember him?

Spike was rescued by the wonderful people at the Pembroke Welsh Corgi Club of the Garden State (PWCCGS), after his owner passed away. When he arrived, Spike was 57 pounds, and had a mast cell tumor and severe cataracts. Spike’s tumor was removed and his cataract surgery was completely successful, thanks — in part — to the generosity of the Corgi Nation. 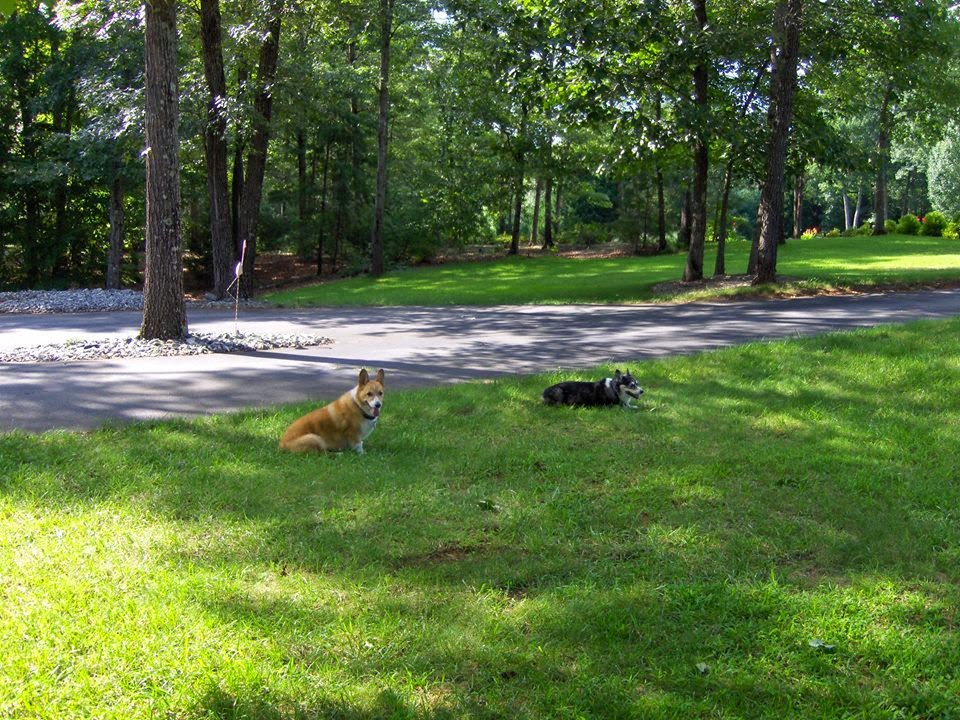 Today Spike can see all of his beautiful yard and his sister Pearl! 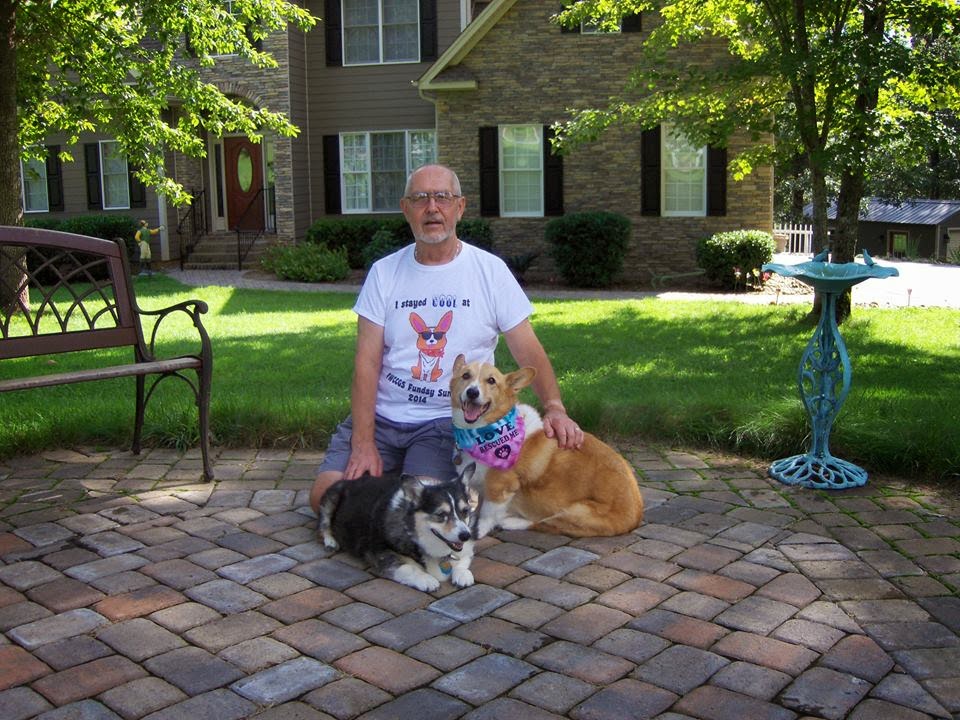 He loves his Da Tom so much!

In the spirit of Thanksgiving, Spike sent a poem to the team that helped him when he was rescued. And he wanted me to share it with all of you — because you helped him see again.

One day my Dad left
And he never came back.
I lost my best friend
I started to grieve
Next went my home.
They forced me to leave!

I moved a few times
And I got really fat.
Then along came Melody …
she took care of that!

I ran all day long.
I almost looked svelte.
So when I left again
My heart started to melt.

I moved from a car to a really big truck.
It held giant monsters,
They snorted and stared.
I hid in my cage.
I was really scared.

After more car rides we came to a stop.
They said this is home,
We are finally there.

There were stairs to the top,
But were too big to hop.
So they built me a ramp
And helped me right up.

The new yard was big
I was really lost,
But Pearl led me
Across the grass fields
Crisp with frost.

Then another big trip,
I had a long sleep,
Mom stayed with me all night,
Though my slumber was deep.

When I woke the next morning
I could suddenly see,
Truly a miracle …
And it happened for Me.

We went back to the house
Stayed behind bedroom doors.
When I peeked out the windows
There were colors galore.

As I healed the doors opened,
Free once again!
Could I be hopeful,
Or would this all end.

We had some rough patches
Sometimes they would scold
Though my Mom reassured me,
often through tears,
Had I been too bad?
My heart still held fears.

I tried to be good
We all started to bond.
I learned to be happy,
The seasons passed on.

We went for long walks
and rustled through leaves.
I sniffed the great smells,
Then peed on the trees!

Sometimes when I bark,
My people would frown.
Then they gave up and joined in.
They think I’m a clown.

Today the table was set with big platters of meat,
Then I started to worry,
No one sat down to eat.

Then each gave their thanks for all that they had,
Perhaps things were OK,
No need to be sad.

Then my People stopped talking,
A return of my fearBut with their next statement
I think I shed tears.
They gave thanks that I
Joined the family this year.

I was finally sure,
I could dare to believe
I had a home … forever …
And I had it right here!!!

So this Thanksgiving
It is finally true.
I have a forever home,
And I thank all of you.

Ten year old Frankie stakes out his favorite spot on the couch. Flooftastic.   Jasper still looks a lot like a puppy, but he ... END_OF_DOCUMENT_TOKEN_TO_BE_REPLACED