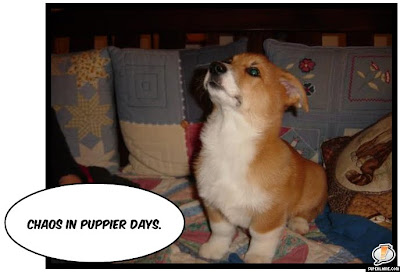 He gets on well with everybody he meets, however, except for a few cats and the random skunk …
Mom Betty says Chaos “feels the need to protect the house from invaders … even the ones across the street from the neighbors who live behind us. If he can ‘see’ them, they must be close enough to be invaders right?” 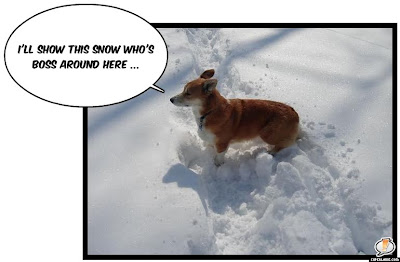 Chaos has the bad habit of stealing food left on the table once he finds himself alone in the kitchen. “I guess he figures if you leave it there it must be eaten by someone.” Well from a Corgi’s P.O.V. this makes perfect sense, doesn’t it?
When his Mom hung up the bell for his potty training, he figured out what it was for before he was even trained. “He rang it as soon as it was up, and he has used it ever since.” 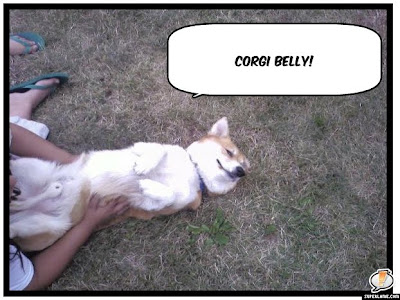 His favorite treat is peanut butter, followed closely by bananas. 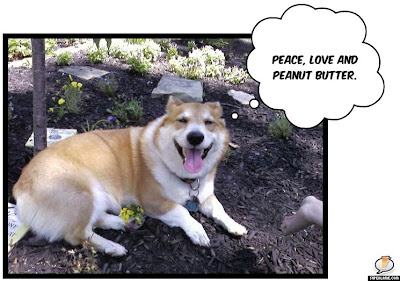 Chaos loves to show off his rawhide bones. He presents them to visitors to show them his prize, but expects it handed back or he whimpers.

His top toy is the tennis ball of which he has about 20 hidden or lying around the house and yard. Once he picks one, that’s the only one he’ll play with for hours. According to Betty “you can throw all 20 and he will go through them ’til he finds “his” and brings it back. 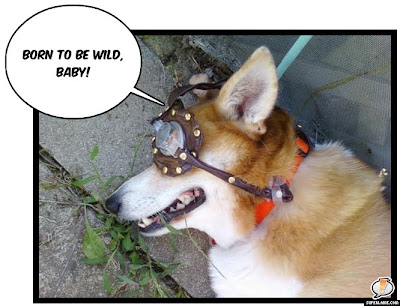 Chaos takes Cosequin everyday for joint issues but other than that is as healthy and fit as can be.

“He is an all round wonderful dog.”

Ten year old Frankie stakes out his favorite spot on the couch. Flooftastic.   Jasper still looks a lot like a puppy, but he ... END_OF_DOCUMENT_TOKEN_TO_BE_REPLACED