Auna and Josh write to The Daily Corgi from Sacramento, California about their three year-old Pembroke, Blue. She is so well-known in her neighborhood that one of her many admirers painted her portrait for an an art show. 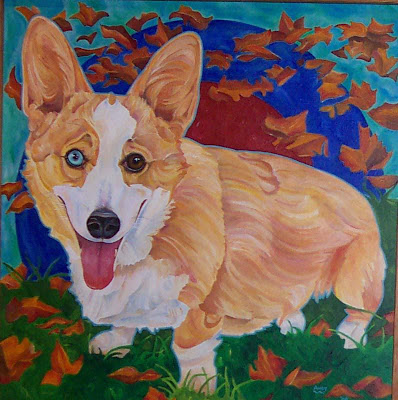 “As a joke, we put up a sign outside the art show saying that she would give autographs for treats.” It isn’t easy being famous. That’s where the treats come in. 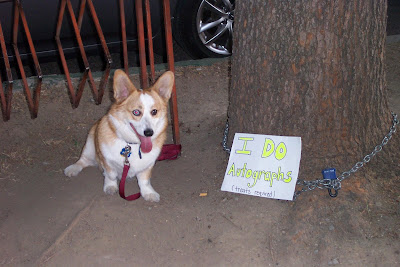 Blue is a big-time bed hound. 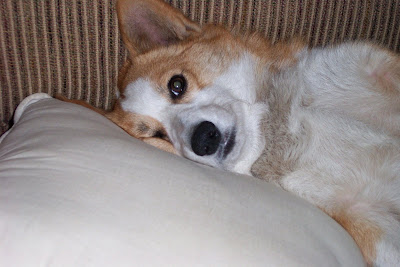 “She likes to nap on my pillow during the day, and she sleeps at my feet at night” says Auna. 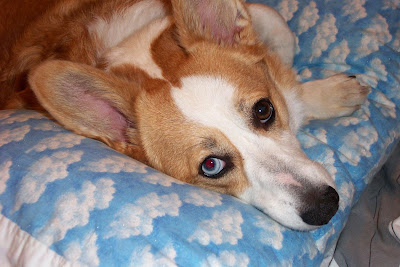 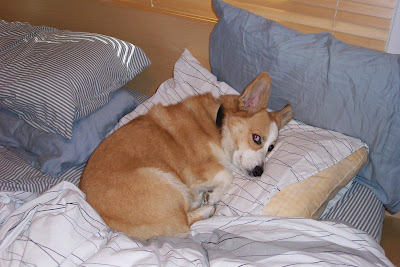 … and the bed loves Blue! 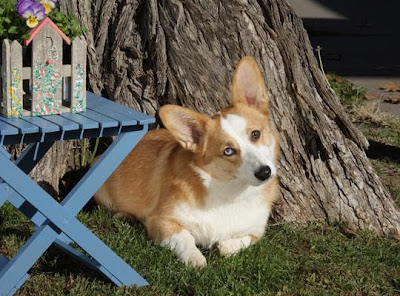 At a local SPCA fundraiser, she was approached to do a photo shoot for a Corgi calendar. 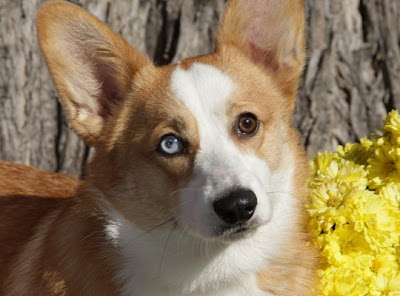 Everyday is Saturday with a face like this around! 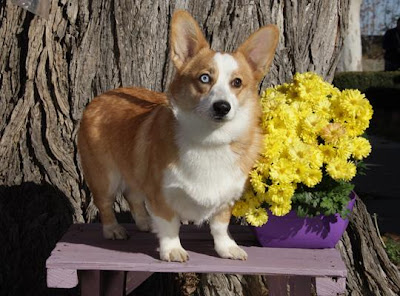 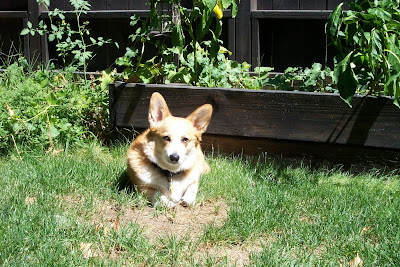 This “downtown dog” is self-appointed herder of household cats Tash and Dia. She knows when a cat breaks a rule, and is on them barking and running until the offender gives up the chase. As sheriff-at-large, she works with Mom & Dad to regulate the feline offenders. “If we say, ‘Tash NO’, Blue comes running from wherever she is to take care of the problem.
Blue loves her job just as about as much as the cats hate her doing it.
Says Auna, “When I explain why her name is Blue to neighborhood children, I have been asked, “Why didn’t you call her Brown?” Excellent question. 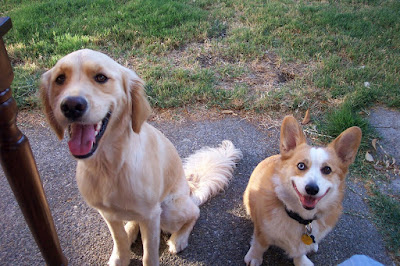 Blue is a super social Corgi and has to make friends with every dog she sees. “When we are walking and she sees another dog approaching, she rolls onto her back and puts those Corgi stumpies high in the air (well, as high as her 4” legs will get). Blue will do this when the other dog is still 20 feet or so away and waits there on her back until the other dog gets close enough to sniff her, then she jumps up and wants to be chased. This happens every day.”
Blue has a particular fondness for big dogs. “Her three best friends are a 100 lb Lab, a Golden Retriever, and a Doberman. She dominates all of them and steals their toys, and rules with a soft but firm paw.” 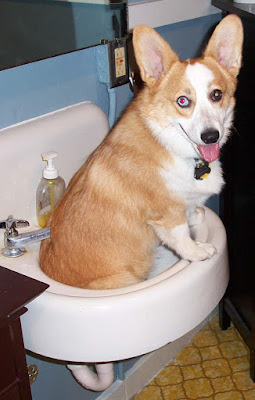 Unlike some dogs, Blue loves vegetables. Among her favores are hearts of romaine, broccoli, and cauliflower. She goes crazy for tomatoes and gets a cup with her kibble servings. If the tomatoes are missing, Blue pouts. Even though one of her many nicknames is “snack hound”, the only snacks she gets are veggies.
* * * * *
Blue, you are one character Corgi! Now you have more fans, from all over.
CORGIS SEMPER FI!

Ten year old Frankie stakes out his favorite spot on the couch. Flooftastic.   Jasper still looks a lot like a puppy, but he ... END_OF_DOCUMENT_TOKEN_TO_BE_REPLACED