Meet Bogart, a five year-old “plush/glamour-coated” Cardigan (he prefers those terms rather than fluffy) living in New Mexico with his two Corgi “sisters” Stormy and Cindy. 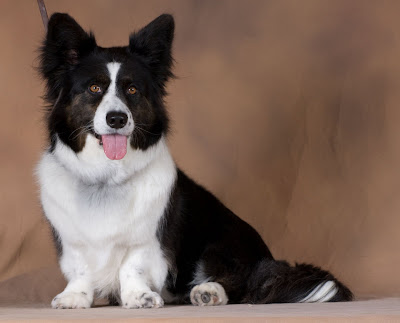 Their Mom Lola describes herself as the “human they own and boss around, a willing victim to their charms.”
(Sound familiar?)

Playful Bogart was born in Panorama City, California. He started out as a show puppy, but as his coat kept getting longer, the shows came to a stop by the time he was about a year old. Bogart found his forever home with some help from a special somebody at the CWC National Rescue Trust. Bogart is a sweet boy who adores Pembroke his “sister” Stormy, though she pretends not to notice him. 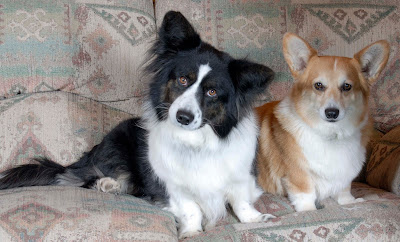 See? She won’t give me the time of day!
Fawn and white Pembroke Stormy got her name when Mom and Dad drove forty miles in a raging thunderstorm to meet her. For the first three and a half years of her life, Stormy had been an outside-only dog, but she was all bathed, brushed and good to go when Lola and her new people first clapped eyes on her.

“She prefers not to discuss her age, but we’re guessing she’s ‘over 39’ in dog years. Definitely a senior gal”. 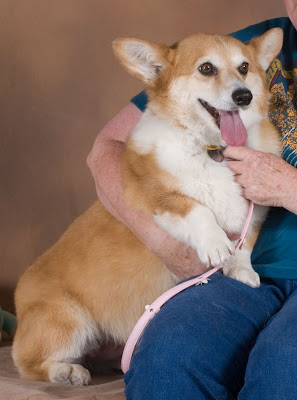 A lady never reveals her age. Or her weight.

At the time, Stormy weighed over forty pounds, but she made a fast, friendly beeline for her new Dad-to-be, as if she knew he was balking at the idea of buying another dog. Says Lola “We didn’t know anything about the wiley ways of Pemmies then, and Stormy won us over in the first half hour. We had brought our late German Shepherd’s airline crate with us, intending that she would travel on the back of our pickup. It was raining so heavily, my hubby decided she was to ride inside with us instead.”
(Or was it Stormy who decided?) 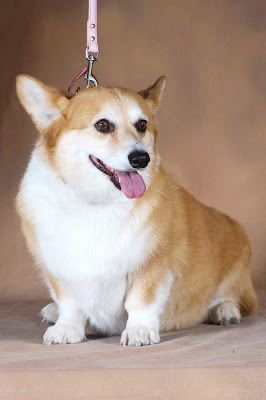 Changing homes was a difficult adjustment for this Pem girl, and it took about six months or so before the true Corgi spirit began to emerge. Stormy’s now the resident ‘royal majesty’, unafraid to let her subjects (everybody else) know when they are slow to their appointed rounds. 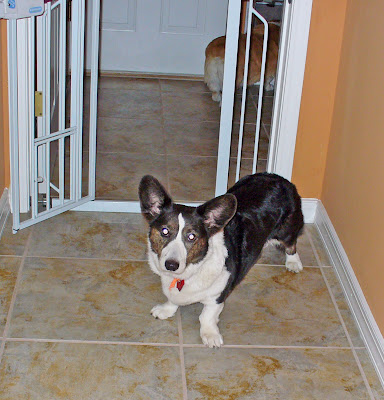 Five year-old Cardigan Cindy is the latest addition to the household. She was returned to her Florida breeder after four and-a-half years in her first home, when her family found themselves facing some difficult personal circumstances. 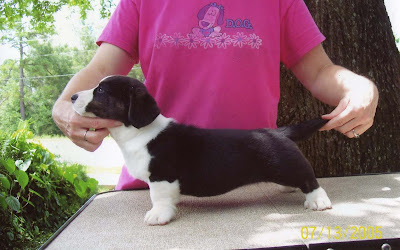 Cindy spent about four months adjusting to her “new” life there, while her breeder explored re-homing possibilities. In January, she made her way to her current New Mexico digs. During the short time she’s been with Lola and the family, she’s had some health issues and quickly grown familiar with her new vet.

A case of high fever and other symptoms of kennel cough have plagued Cindy, and a sensitivity to antiobiotics hasn’t helped any. ” Have you ever tried to get a measured liquid down a little dog’s throat? Cindy, the floor and I have shared two doses of the Pepto so far.” 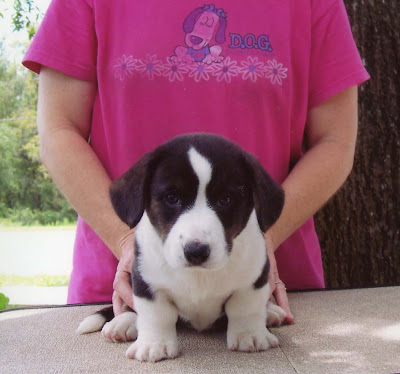 A wee Cindy, all innocent and “who, me?”

“She’s as cute as the ‘bug in a rug’ but demanding and bossy, vocal about her desires. When she’s healthy once more and the weather warms up, I’ll be showing her a thing or two. Obedience classes are available just a few miles down the road. That, in addition to resuming our daily one-hour-long walks, should help to mold her into a nice, quiet, GOOD dog. That’s my plan anyway. We’ll see how that works out.” 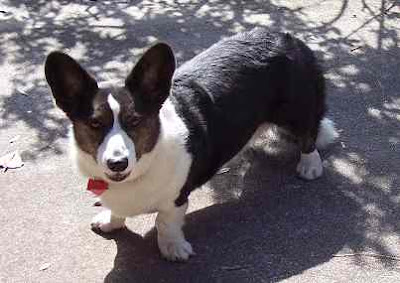 I’m not ill-behaved. I just know what’s good for me — AND you.

“Bogart and Stormy are easy to live with and quite lovable. I must have done something right with them.”

Good luck with that, Lola. Maybe Stormy can help lay down the paw, er… the law!

Welcome to The Daily Corgi, Bogart, Stormy and Cindy!
You are definitely keepin’ it Corgi — and interesting — down there in Rio Rancho!

Ten year old Frankie stakes out his favorite spot on the couch. Flooftastic.   Jasper still looks a lot like a puppy, but he ... END_OF_DOCUMENT_TOKEN_TO_BE_REPLACED