Can you guess what else besides Corgi is in three and a half-year-old Dinki’s genes? 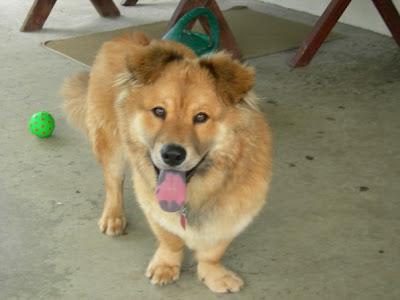 (Hint: his tongue has spots that look like Blue Kool-aid).
“I describe him as a big puffy lion whose whose legs have been cut in half” writes Mom Noreen T. “He can’t even jump into the car on his own, because his body is too heavy for his short legs to spring him up! Most people are in awe when they see him.”
(Have you guessed it yet?) 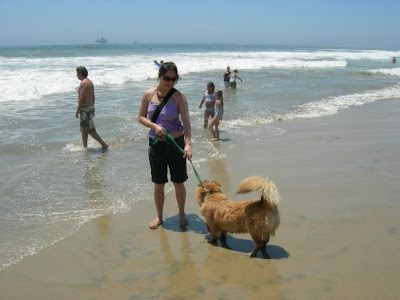 Dinki is a Corgi/Chow mix!
“All in all, he is an adorable little sweetie, and I think his awkward height makes him all the more adorable.”
(Short legs make almost anything cuter, this is true.) 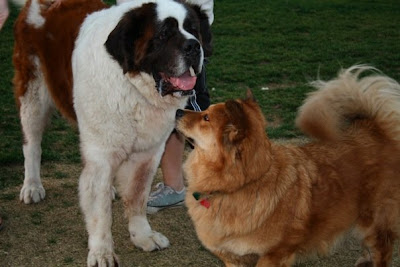 “His demeanor is mostly very sweet and laid back, but he has a protective side. Dinki will bark at the mailman and growl at any tall, dark strangers walking around at night. He loves to lay on your lap and cuddle and just loves to be loved, but he will also be happy chewing on a giant bone for hours by himself.” 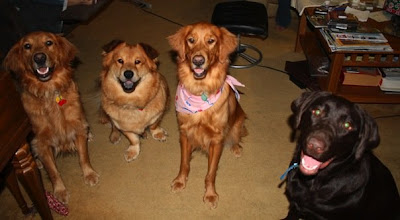 In this best friends photo, Dinki’s flanked by Golden Retriever “cousins” Ginger and Cody. The Chocolate Lab on the right is his “sister” Madison.

(Isn’t this just one of the hap-hap-happiest dog pictures ever?)

Ten year old Frankie stakes out his favorite spot on the couch. Flooftastic.   Jasper still looks a lot like a puppy, but he ... END_OF_DOCUMENT_TOKEN_TO_BE_REPLACED