Pems Chloe and Lou keep it Corgi in Reno, Nevada with their family Amanda and Quincy C. 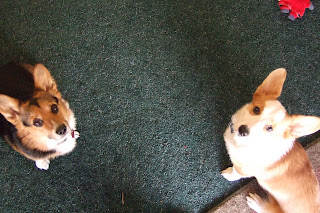 The day Lou (on the right) came home.  He was seven months, his new big sis Chloe was two years old. 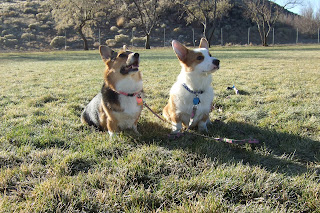 One week later, posing for photos.  “Sit and stay” are not exactly in a young Corgi’s vocabulary, but they did a fine job!
“Friends always comment on how different they are from one another” writes Amanda. 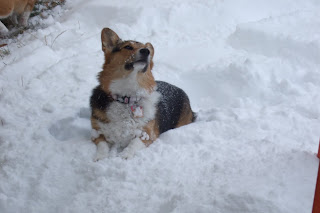 “Chloe is out of control and wants to play constantly! Seriously, if we have any sort of company over, she won’t relax until they’re gone. She is always dropping toys at their feet wanting to play fetch. Chloe is just like a little kid, so afraid she is going to miss something if she leaves the room or attempts to lay down.”
Three year-old Chloe has been with Amanda and Quincy since she was eight weeks old. 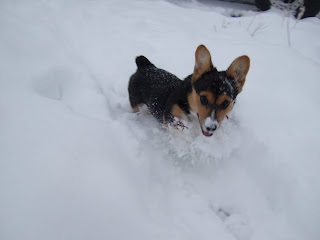 Snow is like “crack” to her!
“In this pic she is actually laying down in a snow pile that came off the roof. We had to force her inside to thaw out.” 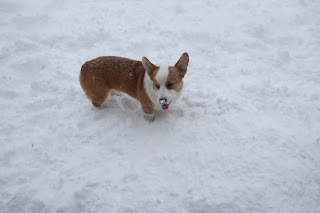 Lou’s first time in the snow.  “He liked it, but wasn’t quite sure what to do with it.”
“Lou is our cuddle-bug! He’ll fall asleep anywhere no matter who’s around. He sometimes starts to doze when he is just sitting down. You see his eyes start to close and his head will start to fall!”
Lou’s nearly a year old, now. 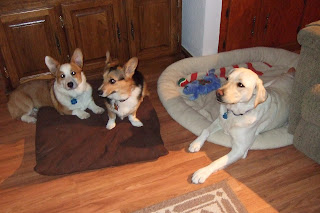 With white Lab cousin Maggie, who’s two weeks younger than Chloe.
That’s a lot of Dog Wonderfulness in one picture! 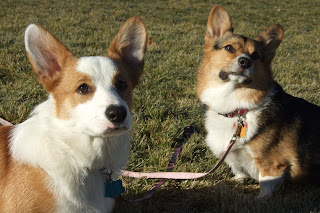 Posing for Christmas card pics in the park.
I’ll bet Santa wouldn’t mind a couple of helpers like these.  Move over, Donner and Blitzen!
*  *  *  *  *
Welcome to The Daily Corgi, Chloe and Lou!
Barrels of biskies to the both of you.

Ten year old Frankie stakes out his favorite spot on the couch. Flooftastic.   Jasper still looks a lot like a puppy, but he ... END_OF_DOCUMENT_TOKEN_TO_BE_REPLACED