Jim M. of San Jose, California wrote to The Daily Corgi about Roland, the spirited Corgi-Lab mix who became his buddy for more than sixteen years. 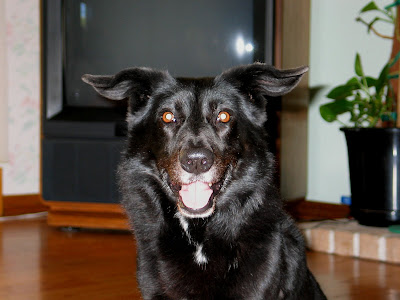 Jim tells the story of how Roland joined the family:

“On July 4th, 1993 My son Ron was working in a grocery store in San Jose when someone dropped this little puppy off near the door. When his shift was over, he brought the puppy home, as he was pretty sure it was a black Lab. We named the dog Roland, after the TV fisherman Roland Martin, since Ron was pretty heavy into fishing at the time.” 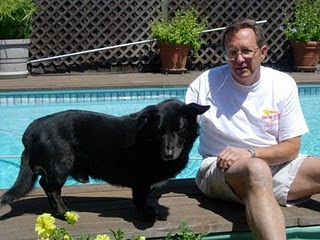 “As Roland grew up, it became obvious that he wasn’t all Lab, as his legs stopped growing.” 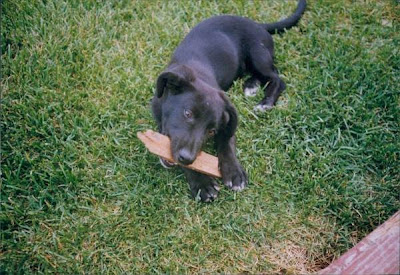 Roland showing the stick who’s boss.
“A few years later Ron moved away, so I adopted Roland, as my wife had a Chihuahua, Bridgett. I kind of felt sorry for Roland, with this Chihuahua as his only canine playmate.  Despise her size, Bridgett didn’t take any crap from him.” 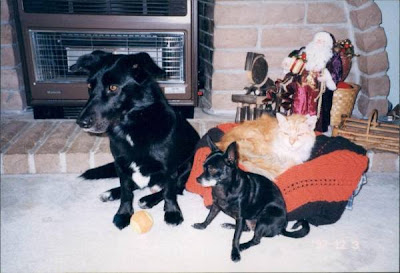 Bridgett showing Roland who’s boss.
“Initially, Roland stayed in a doghouse outside the back door at night, although he had the run of the house during the day.  After Ron left, we had a really cold winter night, and because I felt sorry for him I brought Roland in to sleep beside my bed, just for the night.  Roland never slept outside again.”
“He used to wag his tail in a circular motion, always clockwise. He only did this when he was especially happy, like getting his leash on for a walk, or when we returned after being gone all day, or several days.  Roland’s favorite meal (which he got once every month or so) was Arby’s, hold the bun.” 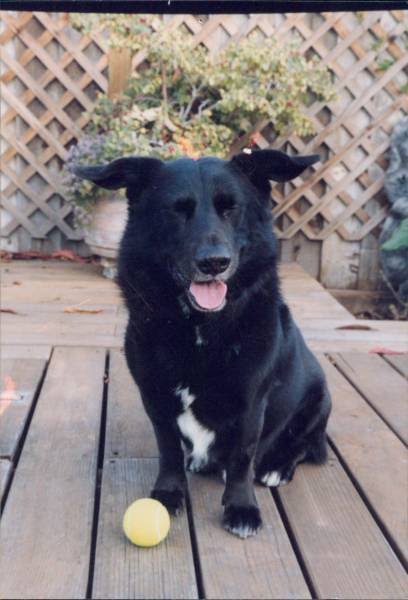 “Amazingly, we never housebroke him, yet he never went in the house.”
“Roland was a great player with a tennis ball, and when he wasn’t chasing the ball, he would chew the ‘fur’ covering off. About the time he was five years old, I started taking him for walks in the evening, mostly on weekends. This became his passion, and after I retired the walks became an every night event. Even if it was raining we’d find a break, sometimes walking as late as 11:00 p.m.” 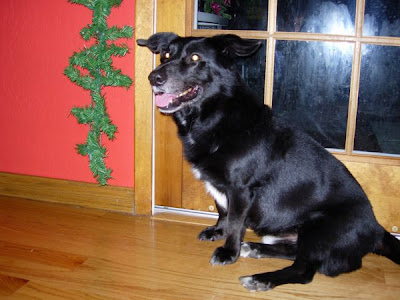 Ready, Dad?
“When Roland was thirteen, he suffered a series of three epileptic seizures, each six weeks apart. These were real scary, and although the vet ran blood tests, we never found the cause, but they stopped as mysteriously as they started. After the third seizure, I noticed Roland was losing his hearing. This did not cause a real hardship, as he quickly picked up on hand signals to come and to stay.”
“I don’t know if his sense of smell increased, but it sure seemed like it.  Roland used to hear the mail carrier rattle the mailbox, and then he’d have to go and bark through the door at him. After his hearing loss, it would be more peaceful, unless he passed by the front door within fifteen minutes of the mail delivery.  When Roland’s nose caught wind of the carrier through the door, the barking would start up!  Since he couldn’t hear the doorbell anymore, any fast moves toward the door meant someone might be at the door, and he was quick to respond.” 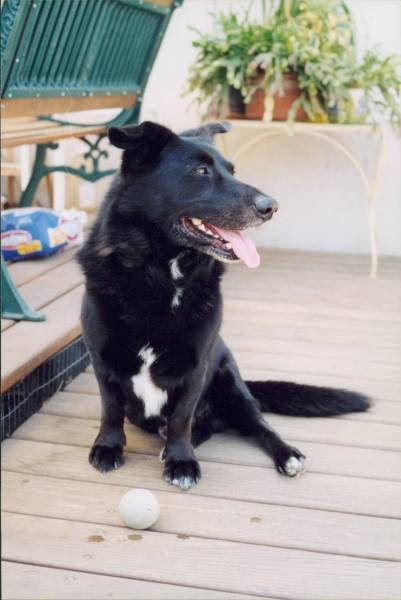 Handsome boy!
“Bossy Bridgett lived to be about seventeen, and after she left us, it was two years before we got another Chihuahua, Ellie.” 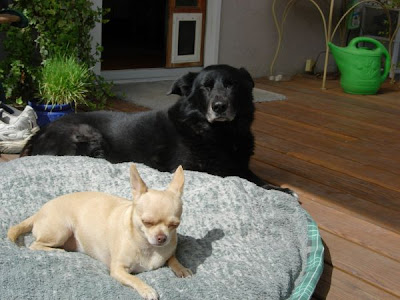 “I let her think she’s in charge … “
“When Roland turned sixteen I began to think about my buddy’s age, as he was getting up there in doggy years. In January (2010) he was diagnosed as having a cyst on his prostate.  We took him to a specialist clinic, where they ran some tests and decided to operate.”
“During the surgery, Roland was discovered to have cancer in his stomach and prostate. He came home, but the recovery was very hard;  he was in pain and losing the use of his hind legs. A month later — on March 11th — we made the decision to euthanize him.” 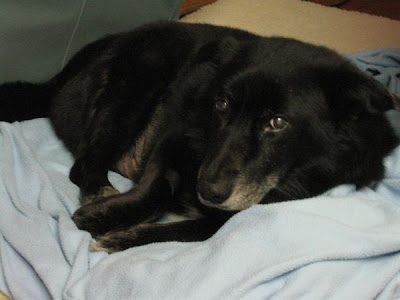 Jim created a lovely on-line memorial site dedicated to Roland:
www.imorialpets.com/Roland
“We were, and will always be, ‘pals forever’.”
*  *  *  *  *
Thanks for sharing Roland with The Daily Corgi, Jim!
He was obviously a most wonderful friend and family member who is much missed.

Ten year old Frankie stakes out his favorite spot on the couch. Flooftastic.   Jasper still looks a lot like a puppy, but he ... END_OF_DOCUMENT_TOKEN_TO_BE_REPLACED