As sometimes happens on The Daily Corgi, a dog crosses the Bridge before the day of their scheduled post.  Having so many dogs lined up in advance is a blessing but sometimes a bit of a curse.  Puppies grow by leaps and bounds, older ones sometimes make the passage — before I’ve had a chance to share them here.
Such is the case with Servo.  His Mom Jean S. first wrote me about Servo and his “sister” Gypsy back in February.  He was fourteen years old and still an unforgettably handsome ladykiller, as you can plainly see. 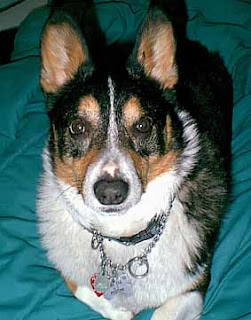 Just over two months ago, Servo’s family had to make the decision to release him to the Bridge.  He had an inoperable tumor in his intestinal area pushing on his organs, and he wasn’t well at all.  On the day before their parting, Jean wrote me:  “Servo hasn’t been the same dog for a couple of weeks now. He no longer smiles or giggles or plays.  We have decided that he is to go to the Bridge and see his girlfriend Tippy again … we are very sad and this is the hardest thing we have ever had to do.  We will miss him very much.”
There was never a doubt in my mind that Servo would still have his day on The Daily Corgi, alongside his little “sister” Gypsy.
Though we say goodbye but once, we love our animals endlessly — just as they loved us.  Perhaps the final chapter has yet to be written in Servo’s story.  After all, there are mysteries beyond what we can see with our eyes, things we know without knowing how, and destinations we can only imagine — until we get there.
Today’s post is dedicated to the memory of Servo, a very good dog.
*  *  *  *  *
Jean S. and her husband named their Pembroke Welsh Corgis Servo and Gypsy after the robots on “Mystery Science Theatre 3000“.
“Actually” writes Jean, “Servo picked his own name. We couldn’t decide what to name him. His Daddy wanted “Napoleon” but I felt that name was too big for a little dog. I wanted Egon like in Ghostbusters but it didn’t fit. So I said “SERVO!” and he came running over and kissed me. Servo it was. Gypsy was always going to be named Gypsy as it fit with the theme and we knew we wanted a female Pem at some point. Both of their names turned out to be very appropriate!  Servo the know-it-all and Gypsy the airhead.”
“Servo was a Tri-color.  We bought him at twelve weeks old. When we met him, Servo stood staring at my then-boyfriend (now husband) as if to say “COME ON! I DARE YA!”  We took him up on the challenge and boy was he ever a challenge!  Servo was the Dog from Hell.  After a five-week Doggy Training Boot Camp, he came out a better, completely different dog whose personality was shining through.” 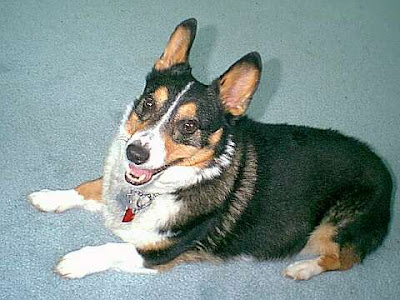 “Servo was a real character. He had a trick called “Kill Words” where we’d give him a toy then say the cue word —   “Madonna!” “Sosa!” “Cubbies!” “Wrigley!” — and he’d shake the toy to “kill it.”  (You might’ve guessed that Jean and family live in the Chicago area ;-).
“My Uncle just loved to play that game with him, until Servo became deaf with age and couldn’t do it anymore.  His deafness also meant he’d no longer watch TV with us.  Servo once watched an entire Seinfeld episode from start to finish. When the Simpsons were on we’d tell him “Time for Homer!” and he knew to take a break then. Sometimes we would tell him that just to get him to calm down.”
“He loved to play Kong.  When it rolled under something and out of his reach, he’d go to my mother-in-law to get it for him. (This was when we lived with her for a while). She would get a cane and fish the Kong out from under the furniture, and after a while, Servo started just going right to the cane. Not to Gramma, but to the cane. Secondary reasoning all the way!  He was a very smart dog.” 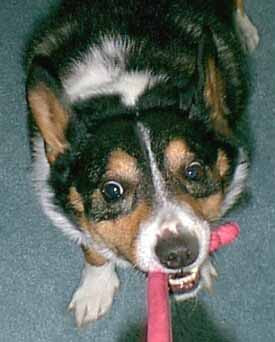 “He loved to be outside and would lounge under “his” tree for hours. He loved people and rides in the car. Once when we were having a party and couldn’t find him, we eventually discovered him sitting in the garage by the car, waiting to go for a ride. Sometimes just driving around the block was enough for him — so long as he went somewhere.”
“Servo enjoyed trips to my parents’ house, where he routinely visited the drainage ditch for his constitutionals. With his arthritis and cataracts, that eventually became impossible for him to do, but while he could, that was his place to go.”
“Servo hated storms, absolutely hated them. We had to give him ACE whenever it was going to storm. One morning it was really bad out and after giving him his meds I went back to bed before work. When I got up, all I could see of Servo was his two black Corgi ears poking over the side of the tub! Somehow he had gotten in, and he wouldn’t let me me take him out. Good thing for second bathrooms! I put a bowl of water in there for him and he was still there when i got home.”
“Before he went to the Bridge, Servo was the oldest dog in the neighborhood. He had a girlfriend named Bailey who was four times his size.  Before Bailey, his girlfriend was a 17 year-old Border Collie named Tippy. Servo always had a thing for older, larger females. They met when Servo was two and Tippy was nine. He fell in love with her and would wait to poop on his walks until he saw Tippy, at which point he’d poop just for HER like the show-off he was. Servo loved Tippy with all his heart.” 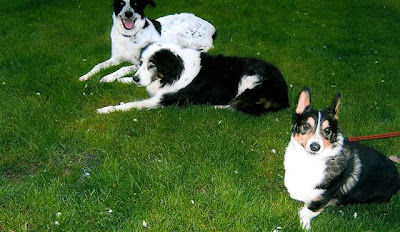 “I’ve gotta beat the ladies off with sticks, I tell ya!”
(In the background:  Tippy in the middle, Bailey to her right).
“He had other girlfriends too, like Star the Irish Setter (the exotic redhead) and Abby the Golden (the blonde bombshell) and he would always “spin his little wheels” for them by scraping the grass with his back paws.  When Star and Abby moved away, he and Tippy were the lone couple until the Pugs Twinkie and Honey moved in and Tippy got a little sister named Bailey.”
“When Tippy passed away and Servo mourned for months, looking for her every day.  A dog psychic at a Pet Expo said Servo knew Tippy was gone and that no one would ever take her place in his heart, not even Gypsy or Bailey. However, we think Tippy came to visit him one night on his walk and told him it was OK to love Bailey.”
“Like any Corgi, Servo loved his food!  He would stand next to me when I was cooking and rub his ears on my leg to remind me he was there.  He adored spicy food, cheese, pizza and Italian food.  Servo had a problem with beef and dairy but still wanted ice cream and cheese, and he was absolutely WILD about popcorn.  A few years back at a weenie roast he found and ate FOUR hot dogs on the ground, in typical Corgi fashion.  The next day he had what could only be described as “haunting gas” that floated from room to room. “ 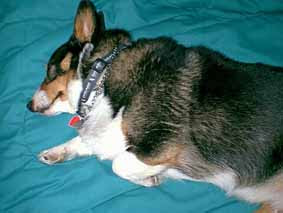 Nope, it wasn’t me!  I did nuthin’!
“When Servo was seven we decided he needed a sister.  We found a breeder about 80 miles from us and picked out Gypsy when she was 6 weeks old. The breeder lived close by to my sister and brother-in-law and they were the first ones to meet Gypsy when we took her home.” 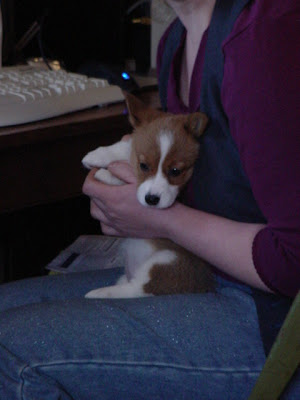 “Step aside, I’m the Boss now!”
“In spite of being so small and cute, Gypsy managed to dominate Servo right away! He never really warmed up to her like we wanted, but they eventually got along. Servo would bark at her at her to leave him alone when he became old and cranky, but of course Gypsy just wanted to play.”
“Gypsy is very active for seven years old, so she goes to Doggy Daycare once a week to tire her out and — while Servo was alive — to give him a break. Gypsy loves it there and has boyfriends named Mac and Eddie.” 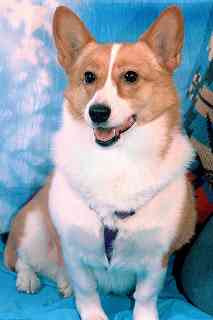 Voted “Miss Congeniality”
“Gypsy is a little dingbat, blonde all the way. She likes to “kill” her treats before she eats them and will do everything in her power to make sure they are really and truly dead.  One of her tricks with Daddy is “wag more” and “be cuter”.  She can wag her stubby furiously when asked!”
“Gypsy likes to play like she’s tough but she’s really a “secret snuggler” who will spin in circles in your lap until she gets comfy. Then she sits there smiling like she just conquered the world. She loves to “talk” to us in the morning and makes some awfully big statements for such a little dog!” 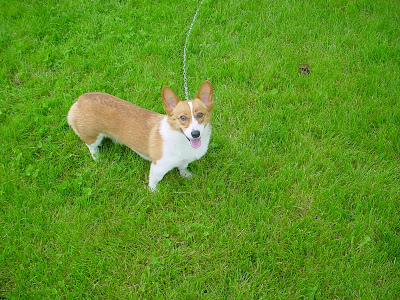 “Gypsy’s not as adventurous in her appetite as Servo was, though she loves to eat strawberries right off the vines in my garden. I had to put them in a raised bed to keep her from devouring them all!  She is dainty and dignified — we like to joke that she is watching her figure — and she’s just all around dippy.  Although she is very smart, Gypsy has a dippy, sunny, shining personality everybody loves. She’s a real sweetie, always smiling.” 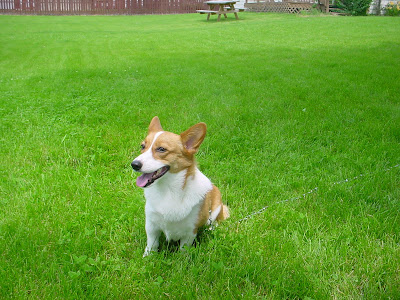 “Gypsy never took to crate training so she has a “room” in the bathroom where she sleeps on her “the stinkier the better” pillow. She really only sleeps at night because she doesn’t want to miss ANYTHING. She never stops! I never thought one dog could have so much energy!” “Gypsy loves to go on walks and meet people, most of whom think she’s a puppy because although she weighs 24 pounds, she is very compact and small proportion-wise. I’ve considered trying to get her into dog modeling, but she won’t sit still long enough.”
“Gypsy’s become quite the snuggler since Servo has been gone, especially during bad weather. I guess he passed it on to her from the Bridge to keep us on our toes. I recently took Gypsy to Dog Day at US Cellular Field for a White Sox game where she did really well — made it through eight innings! When Servo went at two years old he only made it through five. She sat in my lap the whole time (shedding another Corgi on me), saw lots of dogs, ate half a hot dog and never fell asleep once.” 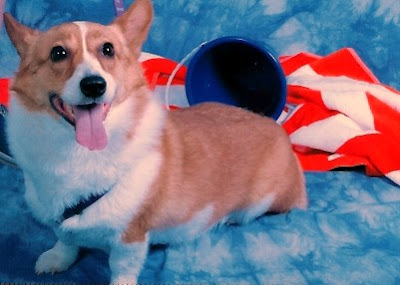 Sleep?  Who needs sleep?
“Gypsy is doing as well as expected, I suppose. She is blossoming as an only dog.”
“I would never have anything but Corgis. They are so smart and sweet and we laugh every day with them around.”

Ten year old Frankie stakes out his favorite spot on the couch. Flooftastic.   Jasper still looks a lot like a puppy, but he ... END_OF_DOCUMENT_TOKEN_TO_BE_REPLACED