Today I received a truly wonderful e-mail from Sally Ann W. of Ohio, who wrote to me about “Charlie Cheeks”, the “special needs” puppy she placed in early 2007. 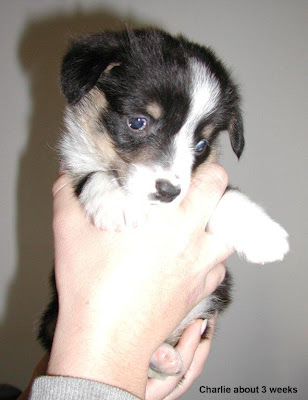 “He had a cleft palate and couldn’t nurse, so I had to hand-raise him.  Most breeders would have “culled” him, but I knew he could have a very special life with the right person.  I had found an internet article on raising puppies with cleft palates.  Basically, after hand-raising them on formula (I used goat’s milk since we had goats then), they have to stay on just dry dog/puppy food and water, absolutely nothing else.  So he didn’t get the special puppy mash my other puppies get.” 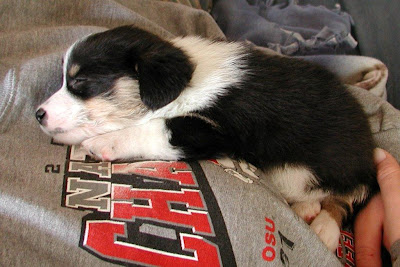 “God brought me together with a very special couple in St. Louis;  Charlie flew out there all by himself, and now has to be one of the most loved Corgis in the world. His head was shaped a little different than the other puppies, but you sure can’t tell that now!  Charlie’s family sent me a letter about his life with them, and it made me so happy.”

Here is the text of the letter Charlie’s folks sent to Sally Ann:

“He has grown into a fine, strong, wonderful boy who is happy every minute.  I mean every minute of every waking hour.  In fact, the other day Laura was sitting in bed with her laptop, while Cheeks snuggled up with his butt against her napping, when suddenly she felt a little wiggle.  He was wiggling his nub in his sleep, so even sleeping hours are happy for him!” 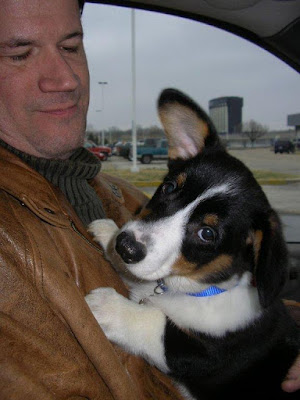 Charlie’s arrival at the airport.

“Charlie’s toy box is fuller than ever and each toy takes its time as the favorite. He has some small rubber studded balls that he loves to chase, making acrobatic catches and snatching them out of the air or off the ground.  If he runs out and stops before we throw it, he will position himself just like a little in-fielder and play each ball perfectly off the bounce. We also have what I call the Joy of Running moment where he will just race around the yard fully extending his little legs and smiling as wide as can be.” 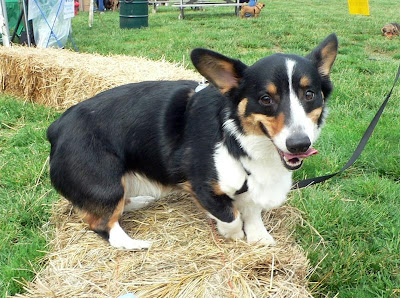 “Charlie loves to swim and will have a ball at my parents’ inground pool, racing a lap around it then hurling himself into the air to land with a splash.  His big beautiful ears will scoop in some water so his swimming is punctuated by a fast headshake to clear the water and it makes a funny “brrrrppp” sound. Squirrels are a favorite intruder into his yard and he will charge after them then bounce around the yard in small leaps like a short-legged gazelle once they have fled.” 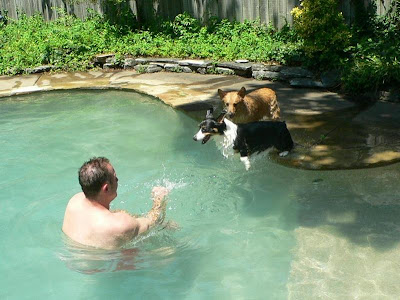 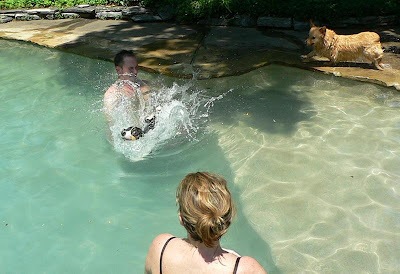 “If you recall, as a puppy he would suck our thumbs like a nursing baby and we often hoped that he’d never outgrow that endearing little ritual. Well we can safely say that he will never outgrow it!  It’s a favorite part of every day, and he seems particularly fond of my thumb, searching it out and grabbing it as soon as I sit down.  He must position himself so that the thumb is in proper alignment for maximum enjoyment;  he will pull and tug the whole arm until it’s where he wants it. Then we settle down and get to work, holding the arm in place with one chubby little paw.  We just get lost in the ritual.  It is soooo cute.  We often get blisters from his lower teeth but can’t bear to pull away.” 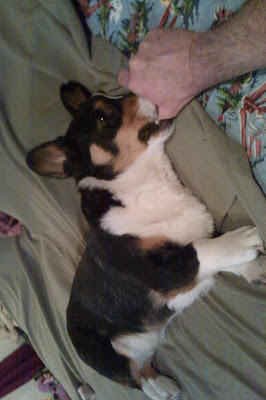 “Mr. Cheeks loves to ride in the car and when the black harness and leash (his gear) comes out, he gets very excited. Another favorite game, there are many, many of them, is what Laura calls Greasy Pig where if you stand with your legs apart he will charge at you, darting between the legs while you try to catch him with your hands. He has a set pattern of barks that add to the fun — “Arf!” — as he runs through the legs first, then “Arf Arf!” as he spins around and runs through from behind, and on and on. We think he has a touch of OCD as he will prowl repeatedly around the bedroom at a brisk pace following a set pattern.  He sort of half gallops with his head down and looks for all the world like a little rhino as he goes “out into the hall, around the (table) leg and he’s back in!” as Mommy describes and praises his actions.” 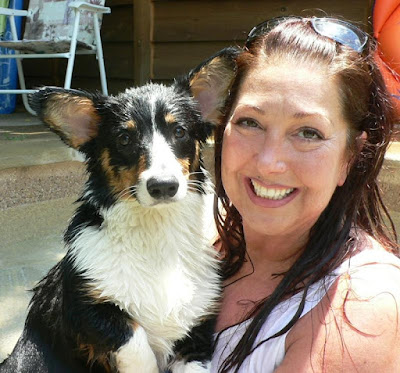 Somebody loves me BIGtime!

“We also have a set path in the yard which we follow closely when returning with a ball. Sometimes he’ll start to vary from his route but will catch himself and veer back on course every time. After a hard day of chasing the ball and playing, he is tired and hot and will take a nice drink from the filtered water that Laura insists he needs, then flop down atop the floor vent in the cool air from the a/c.”

“Digging in the blankets is another favorite game.  Charlie will actually take a toy, pull back the blanket, cover the toy and then sit back beaming with happiness before diving at it to dig it out. We still like to watch TV and bark and growl at anything we don’t like on it. Laura also has a particular hip-hop song she plays, and he gets very mad and barks at the computer until she turns it off. Today he has a sore foot from chasing yesterday and will play up the sympathy angle so Mommy will carry him around and fawn over him even more than usual. He becomes very sheepish and fearful around thunderstorms, firecrackers or the vacuum cleaner and will huddle next to Mom or atop the pile of pillows on the bed until the danger has passed.” 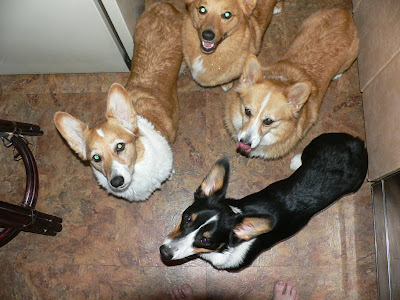 “So all is wonderful for Charlie Cheeks. The little pup who launched out of the airline crate into Laura’s arms has found a little slice of heaven in his happy life, and so have we in him.”

A great big Daily Corgi thanks to Sally Ann, Bob, and Laura for sharing this story.

Ten year old Frankie stakes out his favorite spot on the couch. Flooftastic.   Jasper still looks a lot like a puppy, but he ... END_OF_DOCUMENT_TOKEN_TO_BE_REPLACED