Dodger has been a beacon of love in his Mom Susan’s life since he walked into her heart eleven years ago. 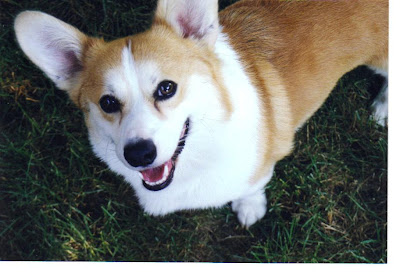 When she visited Heronsway Pembroke Welsh Corgis in 1999 to meet thirteen month-old Dodger (then named Bucky), Susan could hardly believe how beautiful he was and promptly burst into tears.  “Although he didn’t have the temperment or size for the show ring, he was a beauty.”
Although Susan had been on the waiting list for a Heronsway puppy, the breeder felt Dodger would be the right fit for Susan.  “I asked how long it would take this young adult who had never lived away from his mother and a kennel full of other Corgis to bond with me.  The answer?  ‘He’s going to look at you in about three days and say, Susan, you’re the one.’  Well, it took about a day and a half. His name was Bucky, which I didn’t care for, so I renamed him Dodger.”
“It’s not too much to say that Dodger saved my life. After surviving the break-up of a nineteen year marriage and the second of two miscarriages in a year’s time, I was absolutely at the bottom. Dodger gave me purpose and light.” 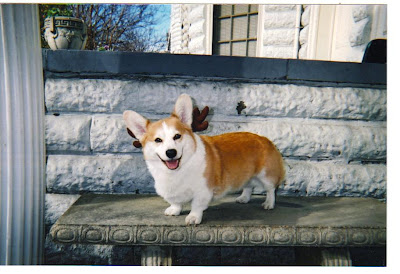 “Since then, Dodger has made me laugh every day. I have taken him with me everywhere, written a blues song about him which I have sung in jazz clubs, watched with pride as he’s delighted the sick and the elderly, and been blessed to have him by my side as protective watchdog through the following eight years of singlehood.”
“In December of 2006 I met a wonderful man on match.com, and now we and his two sons and Dodger are a family. Dodger looks at Jim and tells him “You’re the man I’ve always wanted.” Jim’s family has a camp in the Rangeley Lakes in Maine, and for the past four summers Dodger has fetched sticks in the lake and eaten wild blueberries right off the bushes. Dodger never went “Barooooo!” until Jim came into our lives.”
“Dodger loves sunbathing, even with his luxurious coat. It can be nearly 100 degrees, but he begs to go out on the sundeck around noon every day. The heat must feel good to his old bones. I set the oven timer for ten to twelve minutes so I won’t forget to make him come in. Conversely, he also loves snow and would play in it for hours. I love to watch him “porpoise” through a new, deep snowfall. He still gets the “Corgi Crazies” at times, and will run back and forth at top speed from room to room.” (Ed. note: frapping!!!) 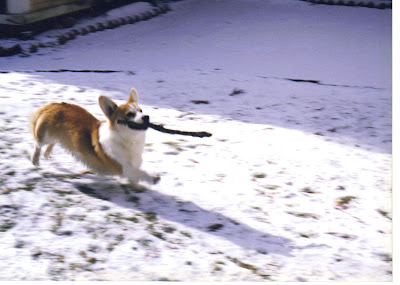 “Dodger has kept his boyish figure through fetching his Winkel toy. Every Corgi should have one — they’re the perfect fetch toy for the small dog. It’s a child’s rattle, and it bounces and has safe rubbery loops. Dodger, even at age 12 ½, makes amazing catches of “Toy,” and gets very excited when we open the closet by the front door, because that’s where “Toy” lives.”
“Dodger’s his appetite is excellent. He does a sort of dance when we’re eating—it’s not quite Sparky Kibble Dancing, but it delights me. He shifts his weight from one front foot to the other, back and forth, back and forth. I should capture it on video.  Speaking of eating, he seems to like everything except mint. Maybe that’s because it’s related to catnip?” 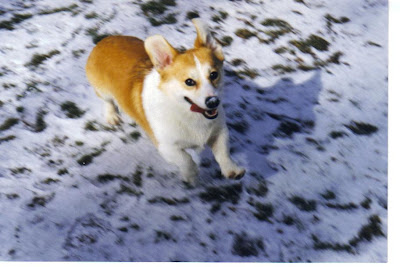 Funny things about Dodger:  “He barks at dogs on the TV or computer from clear across the room, and always barks at men in hats, even on TV. Although his hearing has deteriorated a lot, his eyesight is as keen as ever.  He’s been known to bark at a photo of a Corgi on a calendar!  He only seems to smile when he means it. Which is often.  He does a “ducktail” shake: at the end of a big shake, after the shake has moved down his body, he’ll settle his hind “feathers” just as a duck does.”
“One nice thing about having a dog with so much white on his face is that the signs of aging aren’t as apparent as they might be. His ears are tinged with white around the edges, but he’s still a great beauty. A man once saw him sitting in the back of my car and said, “Your dog has the face of a deer.” 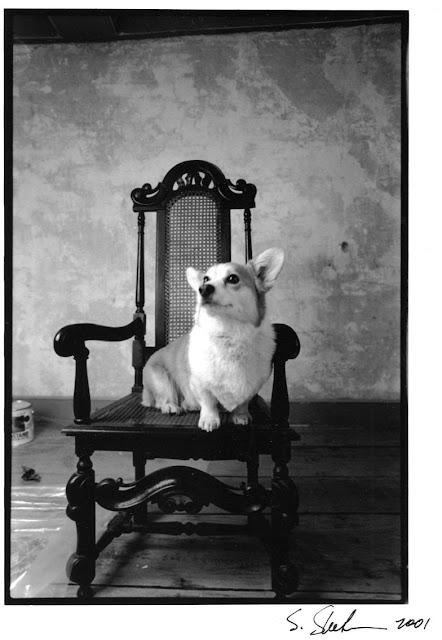 photograph by Massachusetts portraitist Stacy Sheehan
“I wrote a song called Blues for Dodger, which is sung to the tune of T. Bone Walker’s “Call it Stormy Monday.”   The genesis of this song was the limerick I had already written “I’m her Corgi, my name is … “
Blues for Dodger
lyrics copyright Susan Stevens Mooring

Ten year old Frankie stakes out his favorite spot on the couch. Flooftastic.   Jasper still looks a lot like a puppy, but he ... END_OF_DOCUMENT_TOKEN_TO_BE_REPLACED