You might remember Sidney from a couple of weeks back, when he was Dog of the Day on August 14th. 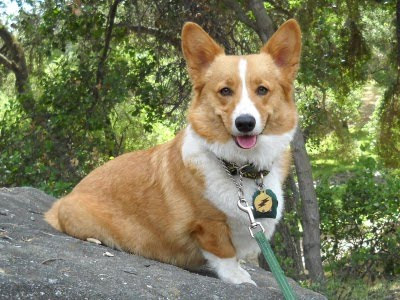 He’s a splendid young Pemmie, a registered therapy dog and a Canine Good Citizen too!
Sidney’s Mom Geri S. writes that earlier this week, “Sidney suddenly went lame and was yipping as if in great pain, and was then diagnosed with severe hip dysplasia. His left femur had popped right out of his insufficient socket. He can’t bear any weight on it.  Next Tuesday he’s going in for surgery, a procedure called a Femoral Head Ostectomy (FHO). They are going to make his poor little short leg even shorter, but recovery is supposed to be quick and he should be able to use his leg again.”
Geri is hoping for “good thoughts, prayers and Corgi kisses to help Sidney come through this” and for her family to be able to deal with the financial part of it. “I wouldn’t dream of keeping him in pain and not doing the surgery, you know?”
Of course not, Geri!  We are all behind you and Sidney.
Everything is going to be A-OK!

Ten year old Frankie stakes out his favorite spot on the couch. Flooftastic.   Jasper still looks a lot like a puppy, but he ... END_OF_DOCUMENT_TOKEN_TO_BE_REPLACED