Accomplished author, Oregonian Corgi-Mom and self-professed “pushover” Diane Hammond first appeared on The Daily Corgi’s radar when she was profiled at Coffee with a Canine. 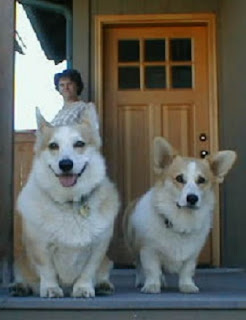 Thanks are due the funny and talented Diane for penning this post about her furry muse (Petey) and muse-in-training (Haagen).  An editorial nod goes out to the half-dozen felines who share a home with these two and provide ample herding opportunities.
(Ahem).
*  *  *  *  *
﻿
You know how this goes: your thirteen-year-old daughter, who is not socially gifted, is having a bad year, spending it with her nose pressed to the social glass that separates her from other kids who are having a ball. A dog, she assures you, will put things right. She’ll have someone of her own who will adore her above all others.
So with your lukewarm buy-in she haunts the dog shows, meets the breeders, finds the dog—a six-month-old, red-and-white Pembroke that’s an outcast in his own right, having bilged out of the stud pool because of a floater in one eye. You’re a soft touch, so what is there to say except when and where do we pick him up?
You buy the bowls, the crate, the leashes and chewies, the kibble, the treats, the toys, all the while knowing you are screwed, screwed, screwed. Goodbye, last-minute weekends in the city; goodbye away-from-home events that last longer than five hours, goodbye walk-less days when the weather’s crappy. 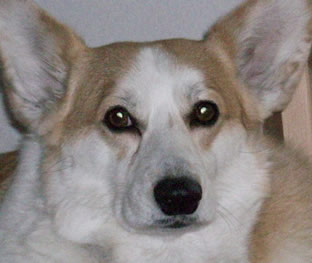 Petey, seriously Corgi.
But you love your daughter more than life itself, so you drive the hundreds of miles, connect with the breeder and meet the dog, who looks even more squirrelly than you, having just flown in from five states away.
You stop constantly on the three-hour drive home. The dog, whose name you now know is Petey, pees. He poops. He circles nervously in his crate. You can’t escape the worry that he’s freaking out because 1) after all, he has been returned, and if you don’t like him, either, where will he go? and 2) you’re sending freak-out vibes of your own, on behalf of your six indoor cats, who have no idea what’s coming.
Over the next days your daughter insists you keep your distance, so Petey will bond with her and her alone. You gladly comply: this is why he’s here. She walks him, she feeds him, she potties him, she places his crate next to her bed at night.
Fast-forward a month.
Disenchantment has set in. Dogs are, she now allows, a lot of work. Worse, this dog isn’t kissy, nor does he run in circles when she comes home from school; he could spend every available moment in her company but chooses not to. He’s just not that kind of dog. He’s an infinitely dignified, thoughtful, solemn dog. It’s just who he is.
It’s not what she had in mind.
Fast-forward another two months.
Somehow, a hand-off has happened. Now you walk him, feed him, take him to go potty, and keep his crate in your room, next to your bed. But this, too, has happened: you have fallen helplessly and deeply in love. He reminds you of a Supreme Court justice, a scholar, a deep thinker. True, he’s not a kissy dog, but he wears his heart on his sleeve in other ways. He follows you everywhere; he’s heartbroken if you so much as take out the garbage without him; if it appears you’re going to run an errand or two, he reads your face anxiously to make sure he’s going along.
He’s become your dog.
Fast-forward two years: you’re a novelist, so most days life is pretty quiet. You’ve assured Petey that he’s your muse, but let’s face it, it’s not a very challenging job. You try to liven things up by walking twice a day by the river and by having a variety of chewies and kong toys on-hand at all times, but you can’t escape the nagging certainty that he’s become too solemn, too introverted: you fear he’s depressed.
You can probably see where this is going. 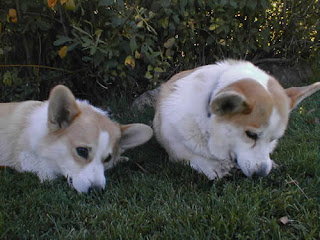 You talk things over with your husband. You contact the breeder. You state your preference: a red-and-white male. You await the breeding, then the birth. You sweat the first two months in fear that the whole litter is show-quality, which means they’re not for you. Finally the word comes down from on-high: get on a plane, because there’s a dog for you. Five days later you sit in a pen being mauled by puppies, and bring your chosen one home in a carry-on bag. By previous agreement with your husband, the puppy’s name is Haagen MacDoggin. 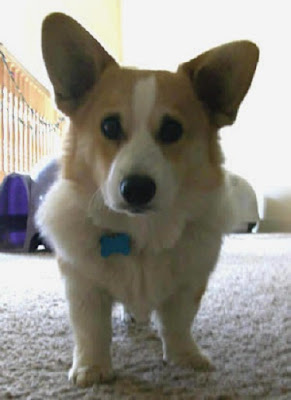 Petey has a puppy of his own. And the puppy is perfect, even though his ears flap like wings when he runs and he barks a lot. He is a joyful sprite who regards life as one continuous source of delight. He loves everything about his new life, and that includes Petey, who pre-chews the puppy’s chewies to soften them up before turning them over, and gets between him and your scary Maine Coon cats if he feels the outcome might be bad.
Petey still lays claim to you, but your husband, a zoo curator, is unexpectedly laid off just two weeks after the puppy comes home. It becomes clear almost immediately that love is in the air. Petey may be a momma’s dog, but within a few weeks of non-stop bonding time, Haagen is papi’s. 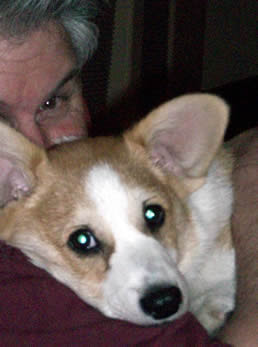 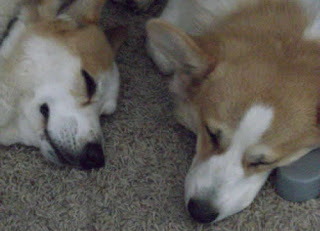 And though Haagen’s in training, Petey is still Number One Muse.
﻿
*  *  *  *  *
Welcome to The Daily Corgi, Petey and Haagen!
Keep on keepin’ it Corgi!
(p.s.:  Diane shared with me a description of a Corgi character Cecil, from her novel-in-progress.  It was good … and not just because Cecil’s a Corgi!)

Ten year old Frankie stakes out his favorite spot on the couch. Flooftastic.   Jasper still looks a lot like a puppy, but he ... END_OF_DOCUMENT_TOKEN_TO_BE_REPLACED