Five year-old Charlotte and nine year-old Farley live in Troy, New York with Greg L. and his family.  According to Greg “they read The Daily Corgi every day to see what their friends are doing.”

(Hmmm, does this mean The Daily Corgi is the People Magazine of the Corgi world?) 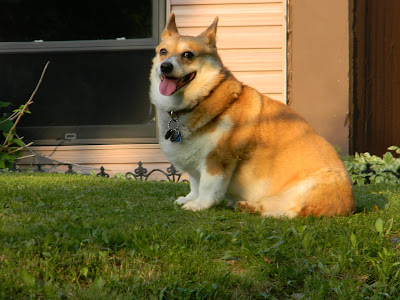 “Farley was born July 15, 2001 and came to live with us nearly three months later.  It was love at first sight the moment our daughter Amanda laid eyes on Farley, and before long she brought home a Corgi puppy for her birthday. Farley had some health issues during his first month with us, but the vets took good care of him and he was in fine health in no time.” 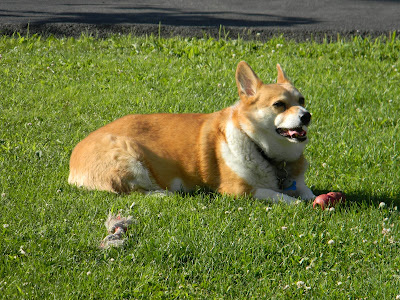 “Farley is very intelligent and was easy to train. He loves to play fetch with his “buddies”. He was very good at catching his flying buddy until he had to have knee surgery following a attack from a neighbor’s Chow.” 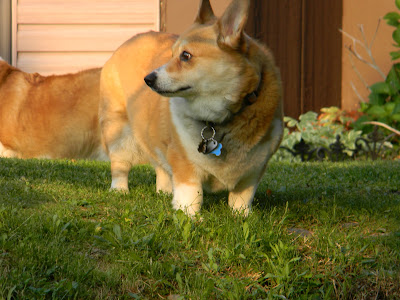 “We were out walking one morning when the unleashed Chow flew from his backyard on the other side of the street and attacked Farley, biting him so hard that our boy required tubes and stitches to close the wounds on his back. In his struggle to flee from the Chow, Farley tore the ligament in his right knee. He had surgery to replace the ligament in April of 2008 and healed up very well, but the strain of the injury caused the other ligament to tear as well and he had to have a second operation in October of 2008. The doctors at Mount Anthony Animal Hospital in Bennington, Vermont did a great job on both of Farley’s operations. Today he has “bionic legs” and is back to playing fetch, although we don’t do the flying buddy anymore.” 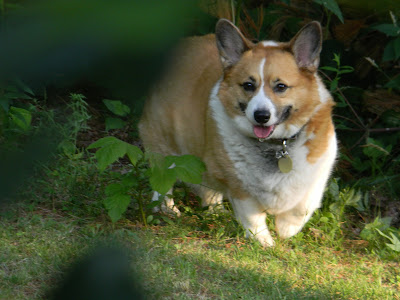 “Charlotte was born March 15, 2005. We found her at a breeder in Ohio and she came to live with us May 8th of that year. We live in upstate New York so Char was flown to us by the breeder. Unfortunately when you tell someone you are from New York, they automatically assume New York City.” 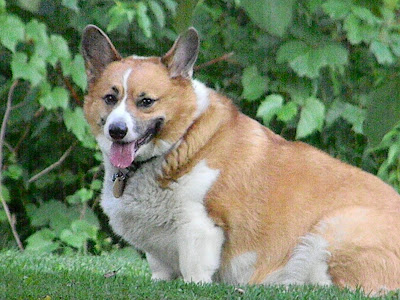 “We gave the breeder our address and explained that we were only seven miles away from the Albany Airport. The breeder sent Charlotte to LaGuardia Airport in NYC. By the time we got the flight number from the breeder and we realized that she was going to NYC it was too late to make any change or to catch another flight to Albany, so we hopped in the car and drove to LaGuardia on a Saturday afternoon. It just so happened that the New York Mets had a home baseball game right across the street and it got over just as we were getting to the airport. Traffic around the baseball stadium was a nightmare, but we got to Charlotte just after the plane landed and took her home to meet Farley.” 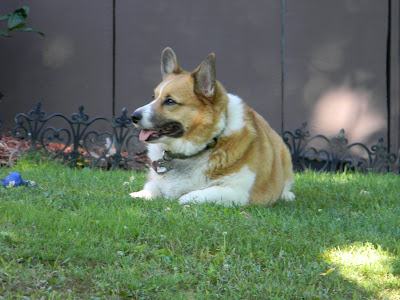 “Charlotte has not taken to the whole activity thing. She’ll play fetch once or twice then takes a break, but she does take pride in playing keep away from Farley. Char will steal his buddy and run around like a lunatic until she gives up. She also likes to slide down the side hill of our yard on her back like she is sledding. It is funnier to watch in the Winter, as she’ll slide down the entire hill without stopping.” 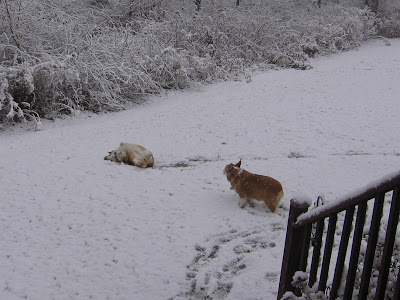 “Amanda recently moved to Las Vegas and has adopted a five year-old Corgi named Lily. She missed having a dog and found Lily at a Corgi rescue. Farley and Charlotte are anxious to meet their new cousin and hope to see them this Summer when Amanda comes home. I have had several dogs while growing up but never had a Corgi.”
“Now I can’t see myself owning anything else but a Corgi. CORGIS RULE!”
*  *  *  *
Welcome to The Daily Corgi, Charlotte and Farley!
You guys are super Corgi Power-ed times 2!

Ten year old Frankie stakes out his favorite spot on the couch. Flooftastic.   Jasper still looks a lot like a puppy, but he ... END_OF_DOCUMENT_TOKEN_TO_BE_REPLACED