Amy D.’s Llyr is a survivor and true inspiration.  This is his story.

“Llyr’s full name is Honeyfox Lord Llyr. He may not have any championship titles that go along with his name, but my boy Llyr is the champion of my heart! Llyr has been in my life since he was nine weeks old and he just turned 13 on February 3rd! Llyr and I go together like peanut butter and jelly … one is just not right without the other.” 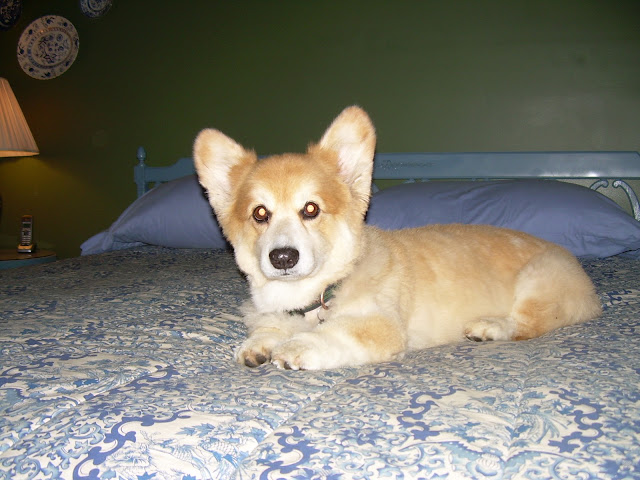 “Llyr may not be a fan of all dogs, but he loves people and he never fails to charm everybody he meets with his heart of gold and smiling face. Some of his favorite things are of course any type of treat, whether the doggy variety or his all-time favorites bunny poo or mulch. No matter how hard I try, sometimes he will drop his head down for those ground goodies and grab them before I can react. Llyr requests (and gets) enjoyable belly and butt scratches. He used to like car rides more than he does now, but he always barks when the car stops at every stop sign, traffic light or just plain any stop! At times his barking used to bother me, now it’s music to my ears!” 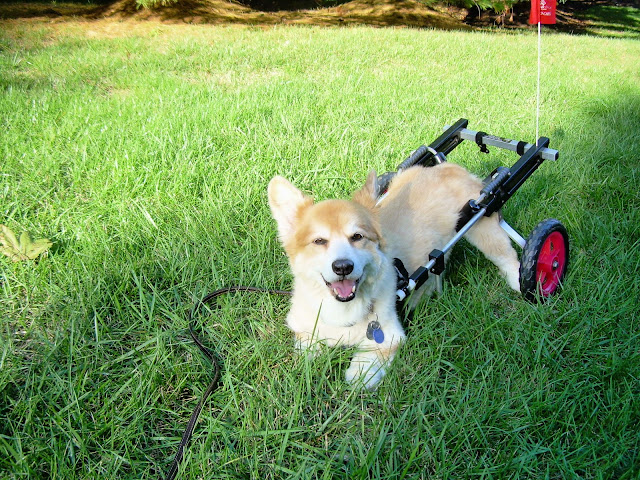 “Llyr has a great team of doctors treating him. He sees his regular vet for general check-ups, a neurologist at the University of Pennsylvania School of Veterinary Medicine, and a wonderful group of people at West Chester Veterinary Rehabilitation Specialty Center. He does rehabilitation two times a week. One day of just swimming and a second day of swimming and land exercises, to help Llyr maintain strength, balance and flexibility for as long as possible during his journey.” 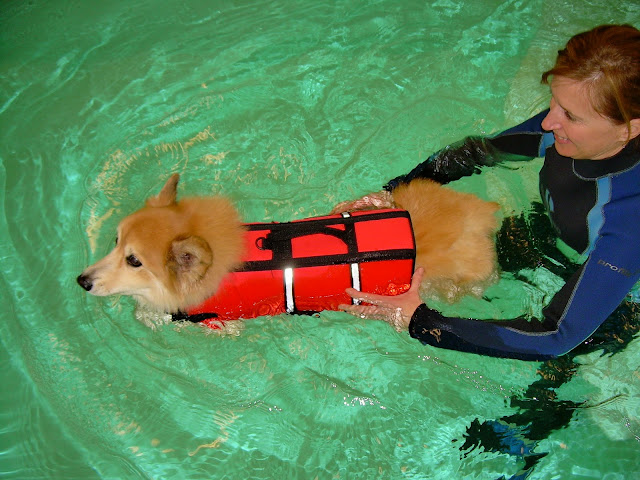 “He is especially happy during his second day of rehab because he gets a frozen treat which helps him keep focused during his exercises. Llyr no longer has the strength to do the underwater treadmill. I also do exercises and massage with him at home.” 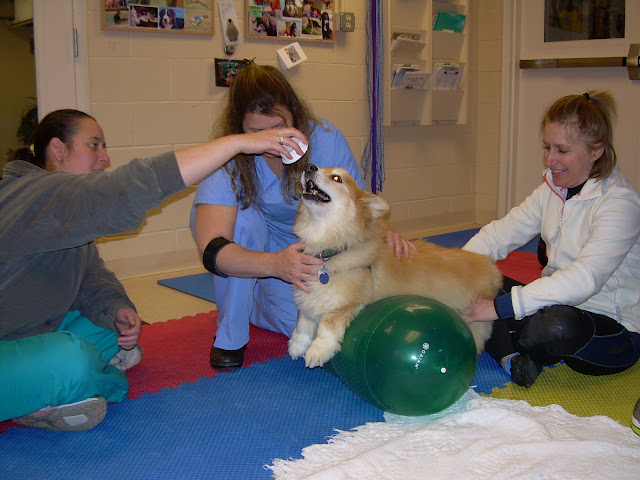 “In addition to dealing with DM, Llyr is a thyroid cancer survivor. His tumor was successfully removed and I opted out of chemotherapy treatment because there was no guarantee that it would help and could be very hard on a dog his age. His tumor was removed in April ’09, nearly a month after his 11th birthday. For the following year his blood work was checked every three months and x-rays done to make sure the cancer had not spread despite the removal of the tumor. In April ’10 he received his all clear blood work and x-ray. I’d never been happier, because the surgeon said that if Llyr made it through the first year, he’d be out of the woods and the chance of a tumor coming back was extremely small. My boy beat unbelievable odds. Since then he’s gone for bloodwork and x-rays twice a year, and results so far are clear. His next bloodwork and x-rays are this April, and if the result is clear he’ll only have to be checked once a year.” 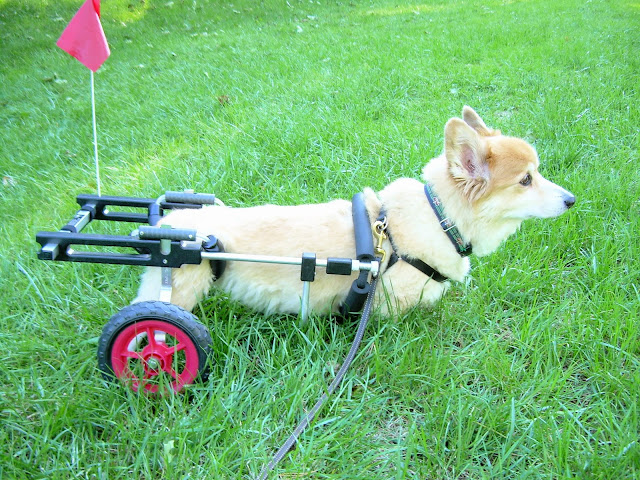 “Three months after his check up in 2010 he was attacked by a neighbor’s off-leash dog.  In our townhome community, dogs are supposed to be leashed. Llyr always has been. The owners of this aggressive dog left the door open to their house, and this dog came charging over to where Llyr and I were just starting our walk. The dog brutally pounced on him and Llyr ended up with three bad puncture wounds on his left hip. He had been showing some signs of the beginning of DM prior to this attack — wobbly in the hind end, but still able to walk. He has since not been able to walk on his own, and the doctors believe the trauma of the attack brought on his DM symptoms quicker than if he had not been injured.” 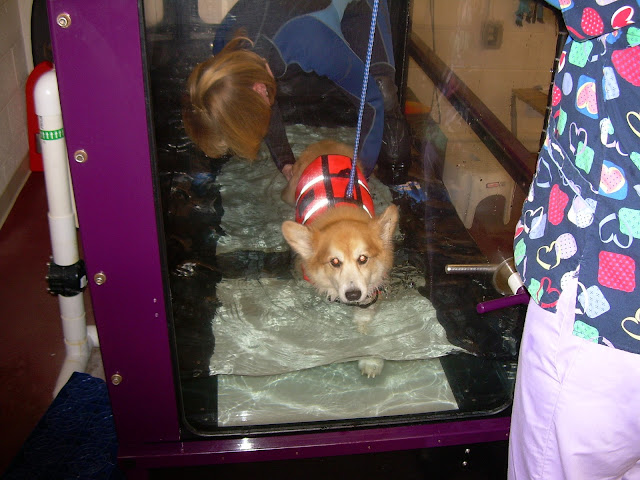 “There was some possibility that he may have had a disc problem, but due to his age (12) and his history of cancer we decided not to do an MRI because it was too risky to have him put under anesthesia. I decided to do the DM DNA test to try to rule out disc problems, and his results were At Risk/Affected.  While I was devastated, I wasn’t completely surprised.” 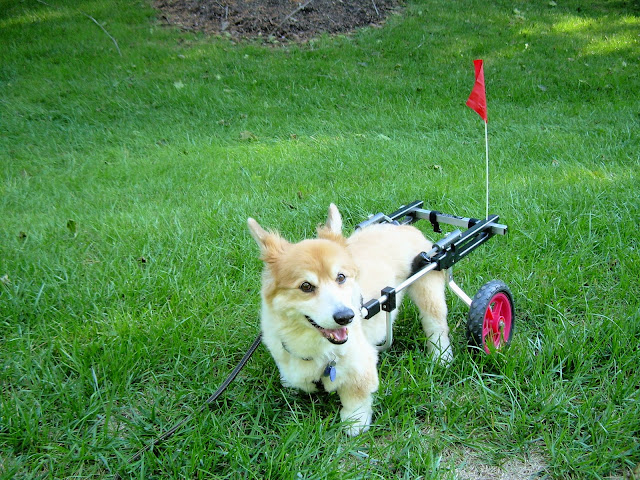 “People will sometimes stop and say “Poor Dog” when they see him in his cart. They are so wrong. Yes, DM is a horrible disease — no doubt about that. There is no cure. Llyr is aging with grace and dignity despite having DM. He wakes up every day with a smile on his face, ready to greet another day with joy and gusto. I wish I could say the same about myself. I know we all could learn a lot from our dogs. I know that I am. He may not be able to walk without the aid of his K9 cart, but he loves it. From the moment he was placed in his cart he was ready to go! A cart can make a dramatic difference to a dog with DM and for their owners, too. Llyr loves to run in his cart even though he is, of course, not as fast as when he was younger and pre-DM. He plays, still rubs his head in stinky things on the ground, and now he can just drop his head for those favorite ground goodies he loves to grab and keep on rolling along! He is always happy to be in his cart!”
“I won’t mislead anyone: DM is a very difficult disease for dogs and their owners. There are constant challenges and the progression is not a pleasant one. As I said, there is no cure and no effective treatment to really slow the progression. Llyr has given me so much during his life and all I do for Llyr is to give him the best quality of life possible for the time he has left.” 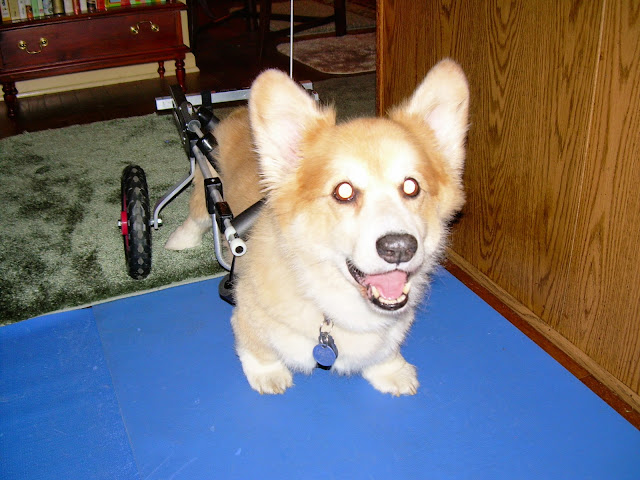 “Some might consider me extreme in all I do for Llyr, but they don’t understand the power of love between an animal and their owner. Do I wish all this had never happened?  Of course, but Llyr and I will continue to be strong through this last challenge of his life. I also know a bit about human challenges because I am a Type 1 diabetic … it will be 25 years the end of March.”
“To breeders who test their stock for DM, my heartfelt thanks you goes out to you. To those breeders who do not yet test, please be responsible and test. You are first in line to help make a difference in the future of our beloved Corgis! Lastly, to all dogs with DM and their owners, my prayers are with you during this very difficult journey.” 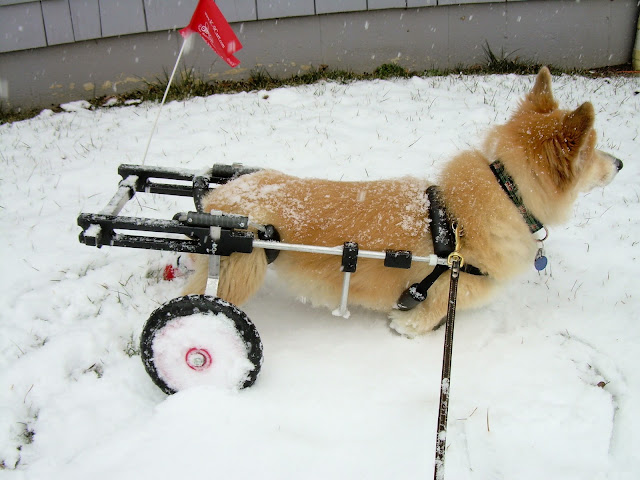 “My tears flow for my boy Llyr, for all those wonderful Corgis who have left this world before him due to DM, and for all the Corgis and owners who are dealing with this devastating disease now.  Thank you very much Laurie for doing this fundraiser for DM research (you’re welcome, Amy!) and spreading awareness of DM. Thanks also to everyone donating to the cause. No dog or owner should have to go through this awful disease. Hopefully someday soon there will be a better understanding of DM, how and why it happens, a treatment and someday a cure!”

Update: Amy kept her promise to Llyr that she would not let him suffer the respiratory problems that DM can eventually cause. She helped her boy Llyr to The Bridge on June 21, 2012.

Bless you both, always.

Ten year old Frankie stakes out his favorite spot on the couch. Flooftastic.   Jasper still looks a lot like a puppy, but he ... END_OF_DOCUMENT_TOKEN_TO_BE_REPLACED