Jack is the only child in his Western Massachusetts household, and according to his Mom and Dad Kathleen and Bob, “he’s the best addition to our family — ever!” 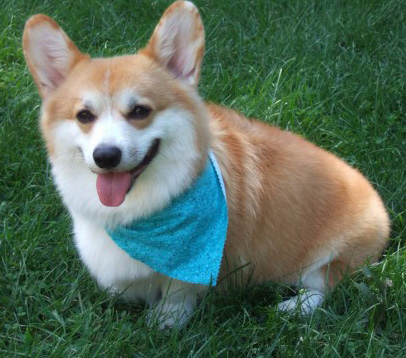 “We knew about Corgis because our neighbor had Max, a Cardigan who became our “rent-a-pup” in the handful of dog-less years we had.  We adored him and began searching for a rescue Corgi when the time was right for us to find another dog to share our home.”

“One Thanksgiving day, my husband Bob was online, and through the Mayflower Corgi site found Jack. He wasn’t a rescue — there were none available at the time — but he was nine months-old and up for adoption.  Jack had shown as a puppy, won some first places, but they had decided to keep only so many males, and felt his personality suited him to life as a pet.” 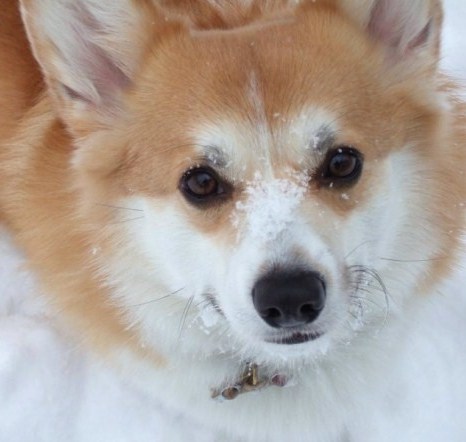 We met “Foxtail Silversaddle Sweet Storm” (aka Jack) that following Sunday and never looked back. He came into our home, raced through it sniffing and inspecting everything, and then stretched out on the living room floor, ending up on his back for belly rubs.  That’s how Jack stole our hearts!” 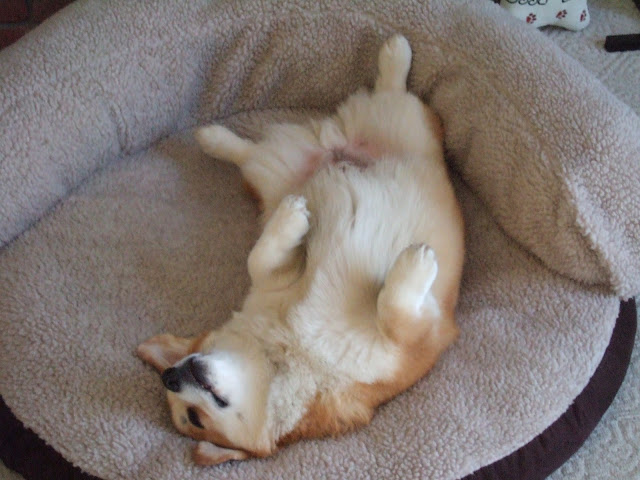 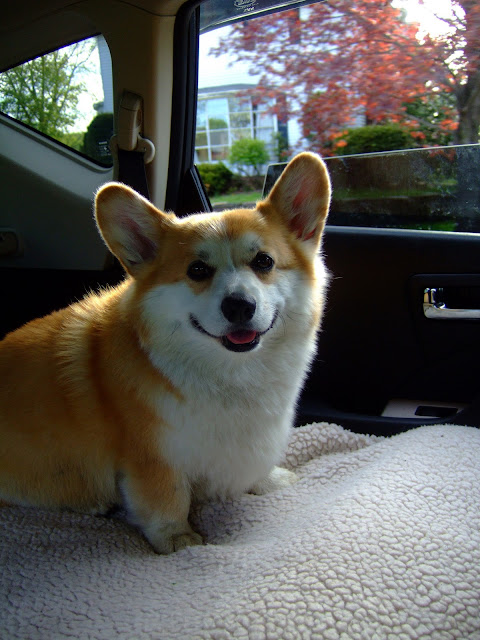 “He’ll run errands with us, hanging out in the back of our SUV. As long as he’s with us, he’s happy doing no matter what!”
“If Jack loses his favorite toy — the infamous green ball — we tell him “find”, and he goes from room to room, sniffing and searching it out.  If he finds it has rolled into a place he can’t retrieve it from, he will come get us and go back to the spot, bark, and wait for us to help.” 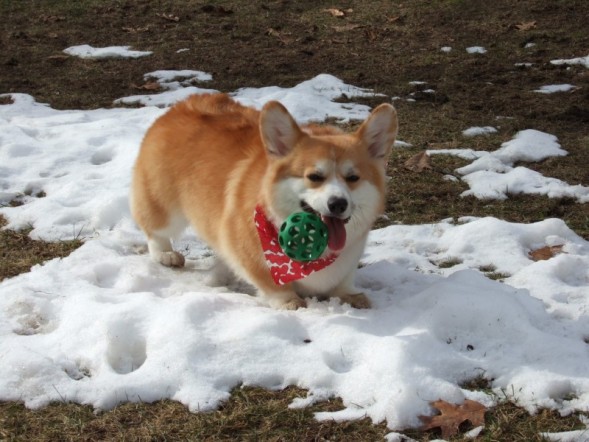 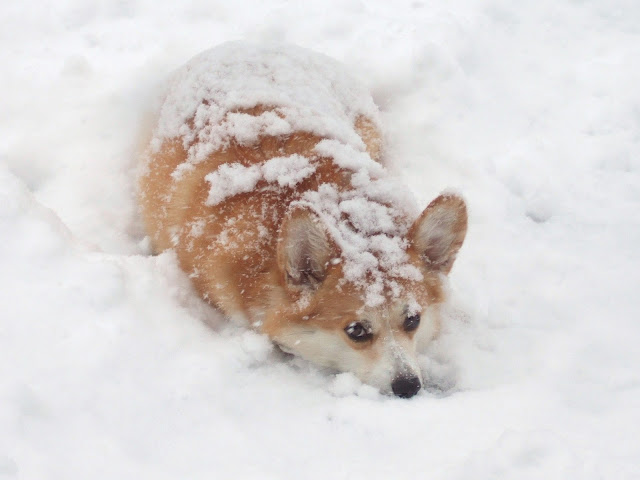 “He’ll race in the snow snow and burrow in it, using his face as a mini plow! 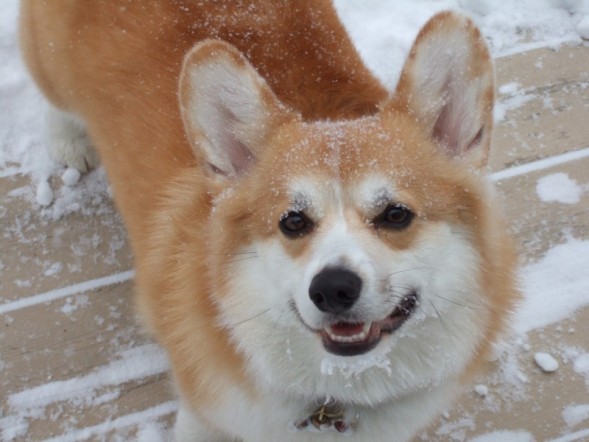 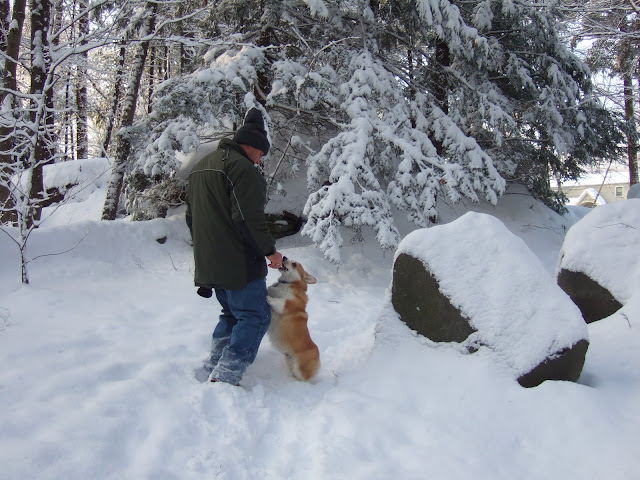 “He relishes his walks in Highland Park, a place to race, check ‘p-mails’, meet up with other dogs, and enjoy all the sniffs of nature!” 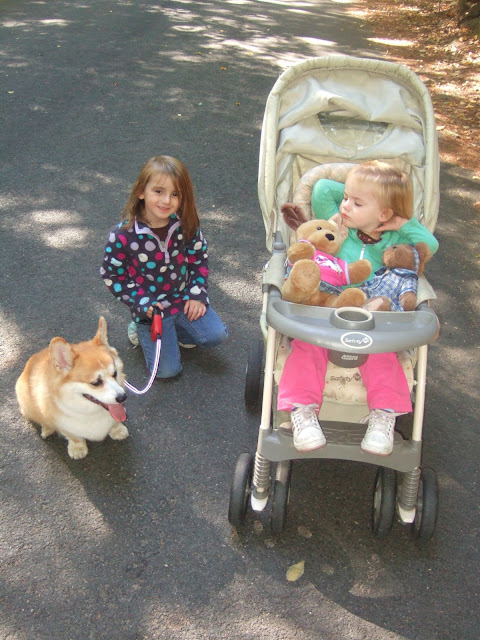 “Two of Jack’s cousins, who love taking him for a walk when they visit.  Jack loves playing ball with five year-old Madalyn.” 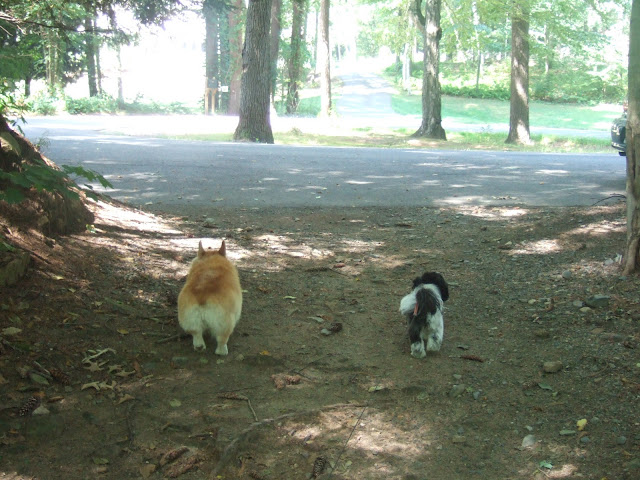 “On the trail with Sophie, the New Hampshire Shih-Tzu he’s got a big crush on.” 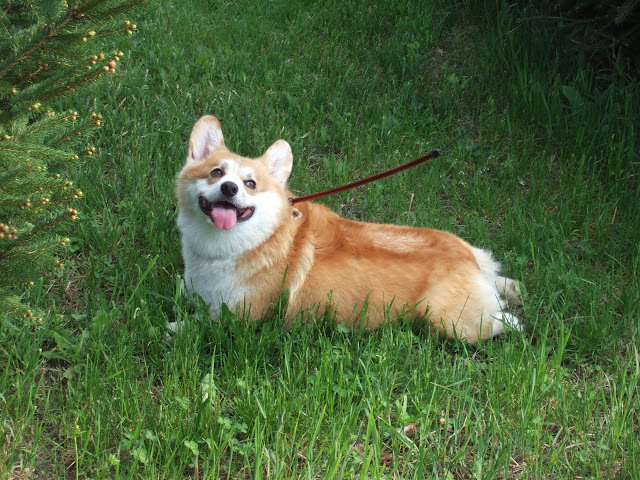 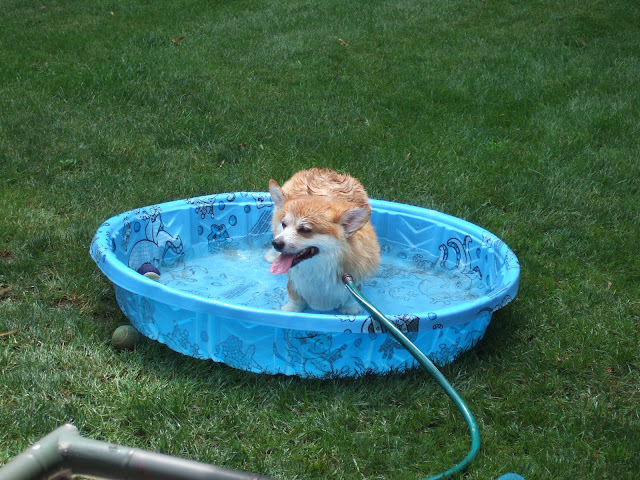 “In Summer, for Jack it’s all about the pool, the hose, and the sprinkler.” 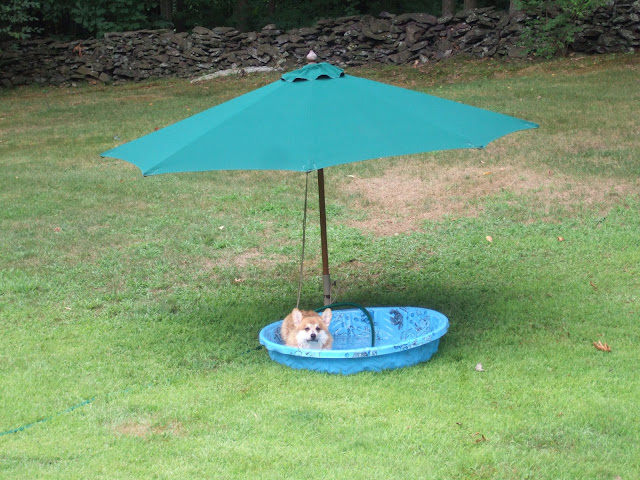 “When the sun’s high in the sky, I have my own cabana.”
“We’ve taken him on vacation with us to Cape Cod to dog-friendly beaches, and even rented a pet friendly camper one summer to take him to New Hampshire to a dog-friendly campground!” 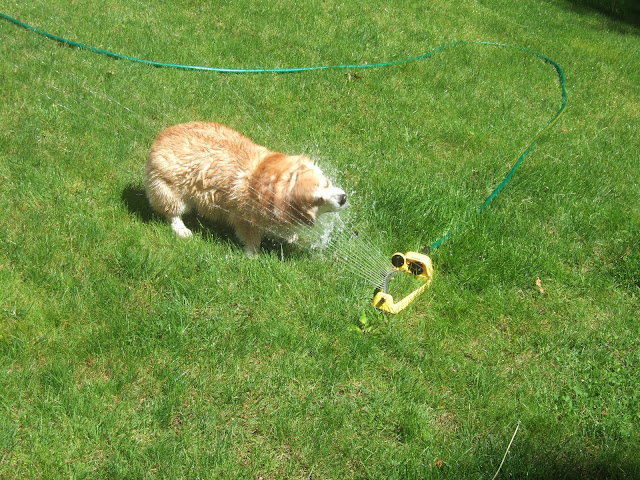 “When he hears the squeak of the faucet, off he goes — waiting for the water to shoot out!  He jumps and plays in the spray, racing at it, biting it, and going up on his back legs to play the streams of water like a harp!” 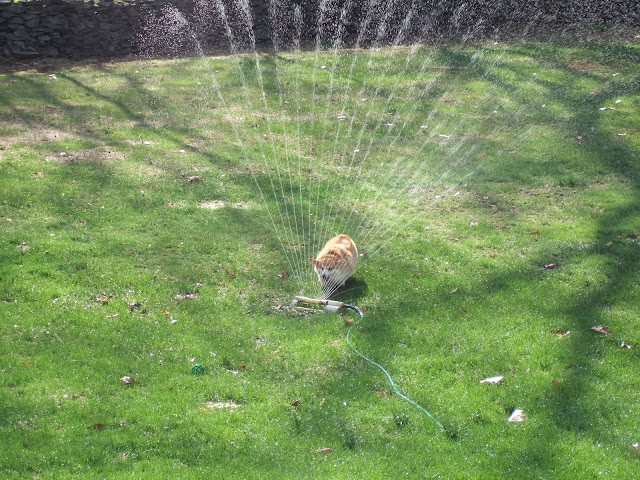 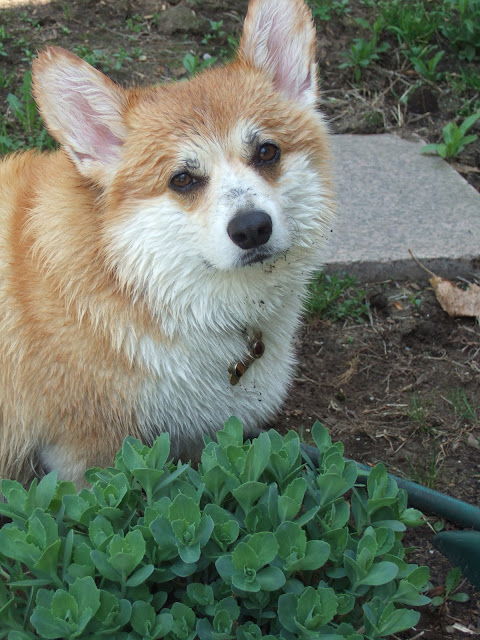 “Jack likes to spend time with us no matter what we’re doing, even if it’s working in the garden. He tries to be helpful!” 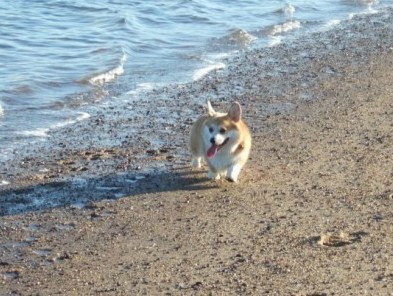 “If there’s a body of water (including large puddle) he wants in!  Here he’s running along Race Point on Cape Cod.  Jack LOVES chasing waves. Being a short stack, he can look across the water and see where they’re coming in best, and race the beach to “catch a wave” Corgi style!” 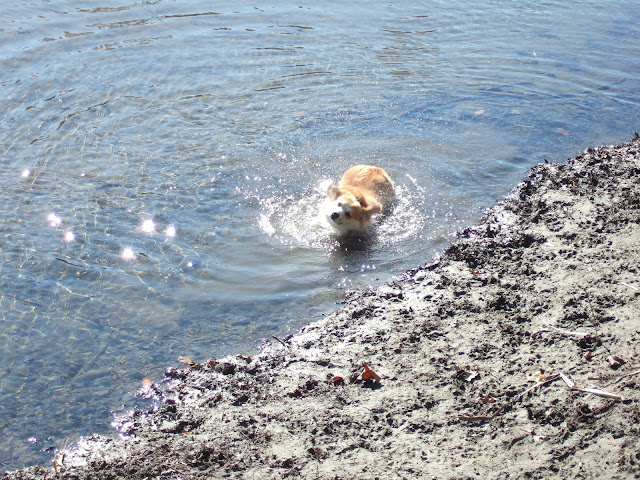 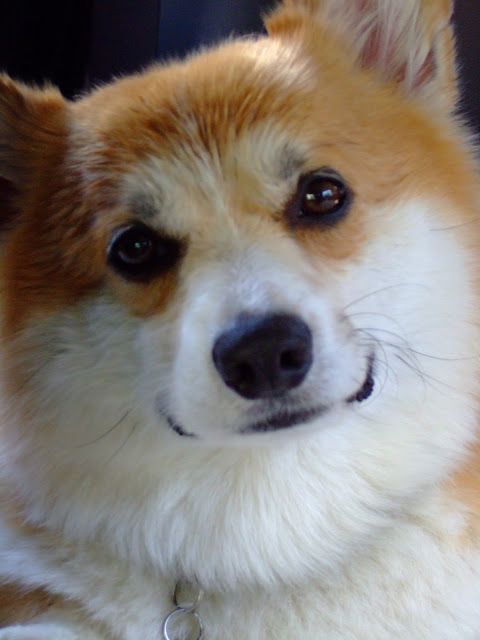 “We once had a jogger stop us on the bike trail. She said she’d been running off the frustration of her workday, and as she was approaching us, she couldn’t stop from grinning when she saw the smile on Jack’s face as he trotted towards her. I think that’s a Corgi gift, making people feel happy just to look at them and watch them play.”
(Ed. note:  works for me!  Everytime).
“Jack had spinal surgery in the second week of January for Cervical Intervertebral Disc Disease.  After his operation, he was released on January 13th to come home to convalesce.” 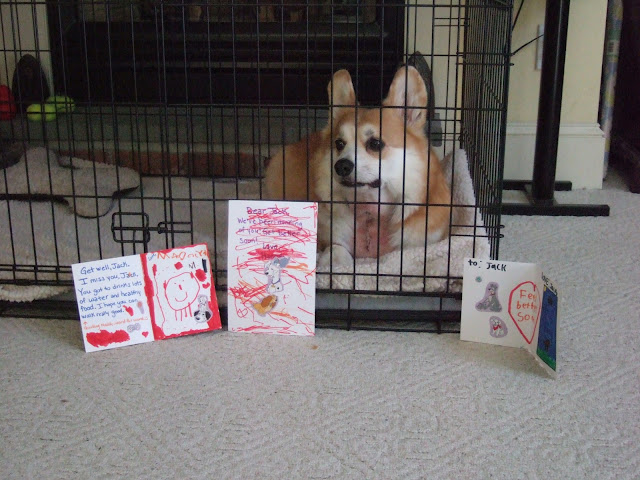 “With get well cards from his two-legged cousins. Madalyn said her prayers for him to get better, and made one of these beautiful cards.” 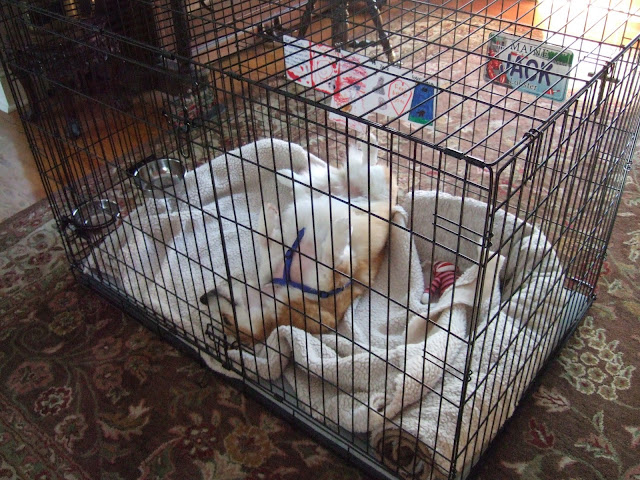 “It was so frightening to hear him scream in pain, and heartwrenching to see his chest shaved for surgery and his legs shaved and hooked up to IV’s when we went to visit him post-op, but they took AMAZING care of him at Tufts University Veterinary Hospital.”

“Jack had to be crated for 23 and 1/2 hours a day for eight weeks.  No stairs, no toys, no running or even trotting.  He could only be ambulatory for 2 minutes at a time with at least 30 minutes in between times, so we’ve had to carry him outside to do his business and then carry him back in.  Jack had his sutures removed on January 25th.” 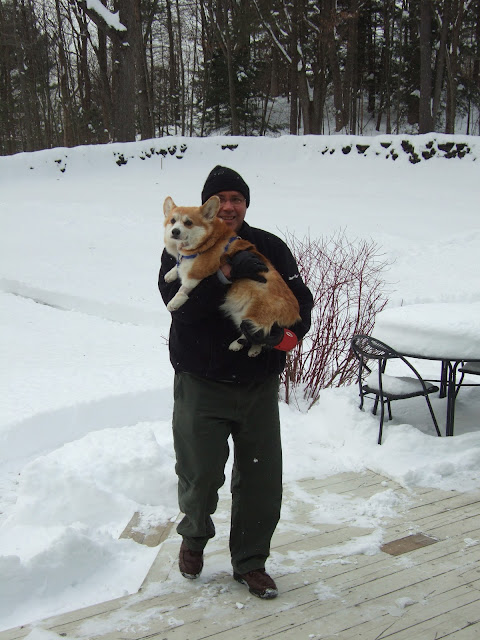 “Jack’s been amazing about being crated. He hadn’t been a crated dog since he was about 10 months old (he’ll be 7 on March third).   We’ve had to squash his inclination to play in the snow and roll around, but it’s great to see the desire. The Daily Corgi and it’s fans have been amazing in their support, prayers, advice … it was such a huge help, especially in those early scary days.”

“We took him for his latest visits to Tufts yesterday, where he had well over an hour with the doctor thoroughly checking him out! They feel he’s walking well with minimal weakness and incoordination in his hind legs which has improved since his last visit. Though he’s still crated, we are now able to add two five-minute “walks” to his day, and in three weeks we can start adding five minutes a week to the walks. His doctor is hoping that eight weeks from today he can be back to fairly normal activity — barring stairs in excess of 1-2 steps, which he will need to avoid for a few weeks more than that. While he warned us that Jack — though not 100% — might be “fully recovered” in terms of his coodination at this point, he said he wouldn’t be surprised if we continued to see some improvement. So, while he may not run 90 mph anymore, it sounds like Jack will still be running around, hopefully for many years to come. :)” 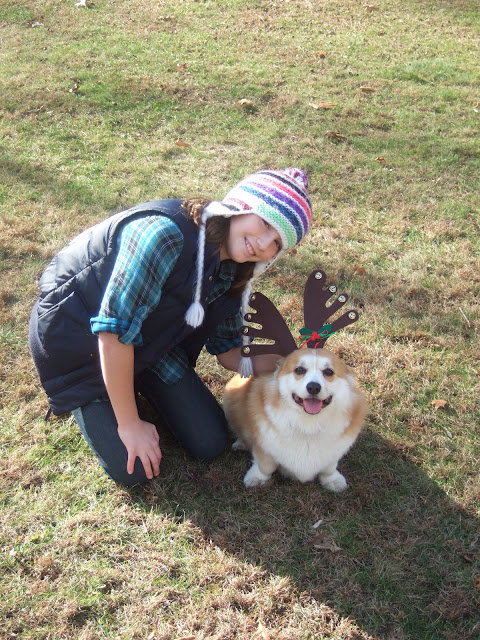 With best friend Jamie, who spoils him rotten!

“Jack can’t wait to get back to defending his yard from the evil machinations of the squirrels that frequent our property.  Silly Corgi that he is, he can be sunning himself and pay no notice to a squirrel ten feet away.”

“Asleep in the back hall, however, at the whisper of “squirrel” he comes flying through the house (you’d better be opening the door as you say the word) to get outside and chase them up the trees!” 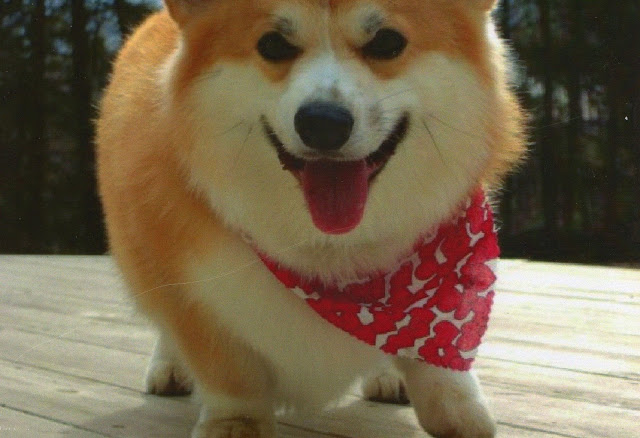 “I know we’re biased, but Jack’s the greatest!”

Ten year old Frankie stakes out his favorite spot on the couch. Flooftastic.   Jasper still looks a lot like a puppy, but he ... END_OF_DOCUMENT_TOKEN_TO_BE_REPLACED