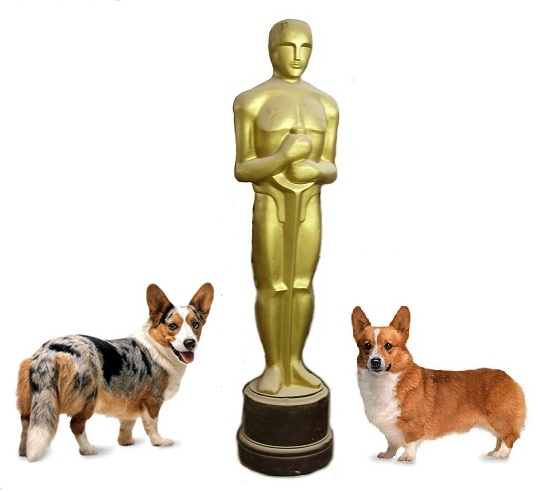 Exclusive to The Daily Corgi by Emily Kiebel.
So, the King’s Speech won best picture because of the auspicious choice to highlight the Corgis and the role they played in defeating Germany during World War II. Some scholars believe the only reason the Allies won the war was because of the Corgis.**
The win was a no-brainer. The Corgis stole the show, and the hearts of movie-goers everywhere.
Here’s how the other nominees could have improved their chances at a win.
“Corgi’s Bone”
A poor Corgi awakes one morning to find his favorite bone has been stolen. The film documents his pursuit of the bone through the haunting landscape of Appalachia in the winter.
“True Corgi”
A wild, wild west Corgi saddles up for adventure in this story of a Corgi-gunslinger with an eye patch.
“127 Hours of Fun with Corgis!”
Self-explanatory
“Inception”
When Corgis dream, do they dream of chasing rabbits? Of eating roast beef? Or is the  Corgi’s dream just a dream within the dream of another Corgi? This one really makes you think “What is reality?”
“The Corgis are All Right”
Corgis have two mommies!
“The Social Corgi”
Obviously. They’re so social they’ll lick your face.
“Black Corgi”
A psychological thriller that paints the portrait of a young ballerina obsessed with perfection, and her subsequent fall into madness. And she owns a Corgi.
Corgi for the win.
“The Corgi Fighter”
A young Corgi protects her home from owl-invasion. The movie documents her relentless pursuit of the fowl creatures by spending an entire night barking at an owl hooting outside the house.
“Corgi Story 3”
A ragtag group of Corgi friends watches their owner grow up and forget all about them. Oh wait, that would never happen. These are CORGIS.
**No actual scholars were consulted, this may or may not be mere speculation.

Ten year old Frankie stakes out his favorite spot on the couch. Flooftastic.   Jasper still looks a lot like a puppy, but he ... END_OF_DOCUMENT_TOKEN_TO_BE_REPLACED