Between Leah H.’s two Pembrokes, Scotty is “definitely the boss – and a moody one at that.  He only comes and says hello to you when he feels like it (probably only 40% of the time), whereas Alice (the Tri) is always waiting at the end of the hall for a pat and a tummy rub when I get home.” 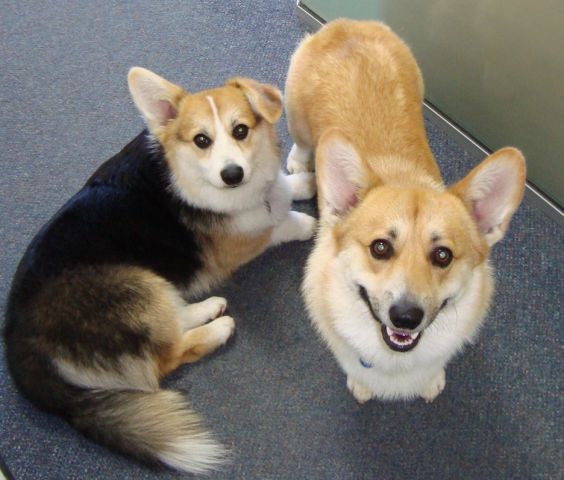 Alice (L) and Scotty (R)
“Scotty and Alice are the best of friends, expect when Alice tries to eat his food.  They sleep together at night in the bathroom and Alice opens the sliding door when Scotty wants to go to the toilet. They’re currently not on good speaking terms, as Alice has become Scotty’s number two girl since he developed a crush on Chase, one of the the next door neighbour’s four Old English Sheepdogs.  They’ll often spend hours on the floor looking into one another’s eyes, which doesn’t bother Alice as she’s asleep on the couch.” 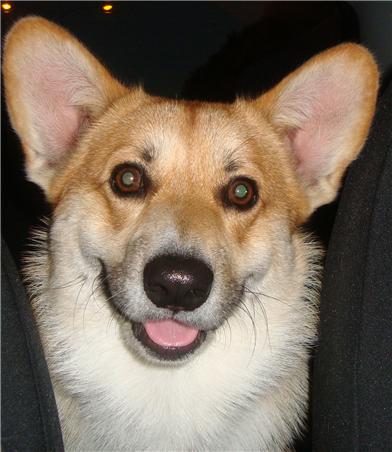 The look of love?
“Scotty is almost three.  We got him just before his first birthday from a breeder who had tried to show him, but Scotty really didn’t like the ring.” 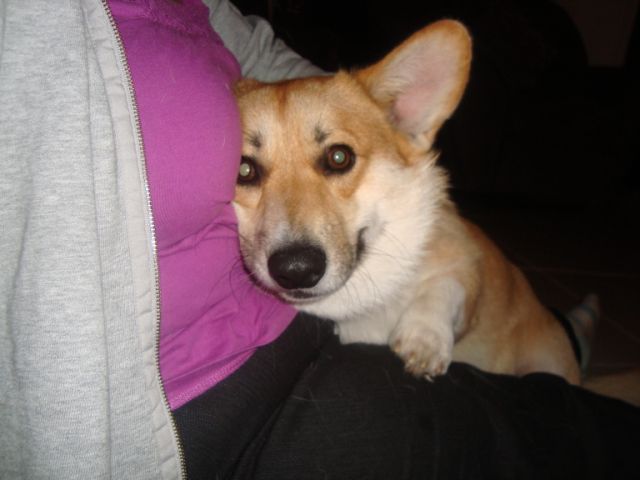 “He was raised outside in a kennel and had never known the inside of a house.  Now he’s an indoor dog and would rather be inside if we’re home.”

“It was quite strange getting a boy dog, because I always had girls growing up.  Now I couldn’t do without him!” 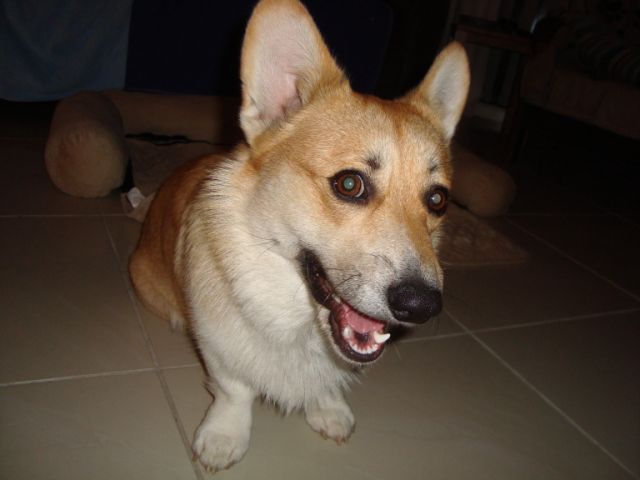 “Scotty has the best smile known to anyone. It doesn’t matter what he does, that smile just makes you forget. At first he was really scared of men, which for my stepdad was a horrible thing, as he is one of those natural dog people to whom dogs naturally gravitate. Scotty still gets scared of loud noises and is wary if he sees you have something in your hand by your side, but he has become such a lovely and great dog.”

“He is the world’s most lovable (I am biased) and loyal dog.  When I’m home by myself, he sits at my feet and guards both the back and front door.” 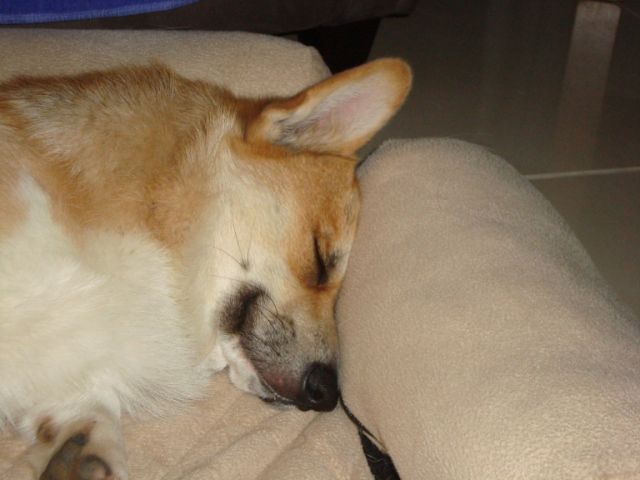 “Intially we got him to keep Nikki our Jack Russell company, but unfortunately we lost her to Cain Toad posioning.  After that Scotty became lonely, as he had always been around other dogs.” 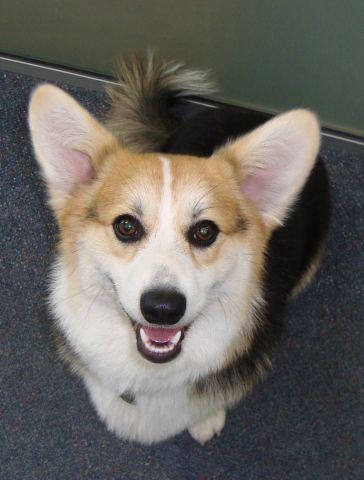 “After losing Nikky we looked around for dogs that needed a good home. While searching a breeder’s site in Australia, I found a six-month-old girl in Tasmania for sale. After long thoughts (about two minutes) we decided to apply for her and we got her.”

“Alice and Scotty hit it off straight away and have been best friends since.” 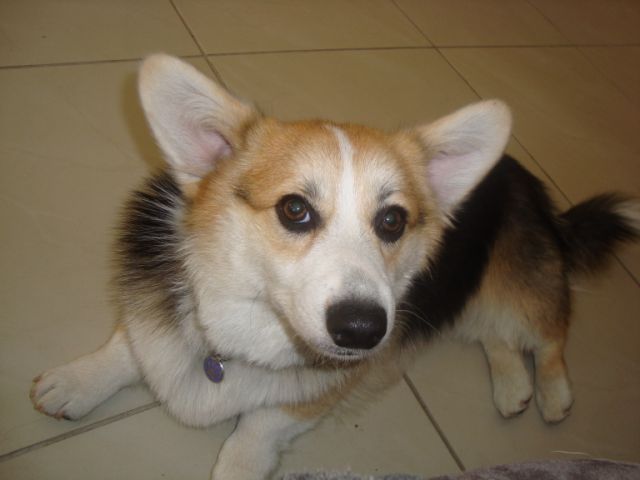 “At two years old, Alice is now a little show off; the minute anyone walks in the house she is on her back with the biggest grin, telling everyone to rub her tummy.” 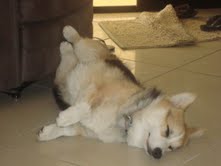 “She’ll talk to anyone and is the most gentle dog, especially with my stepbrother who’s in a wheelchair.” 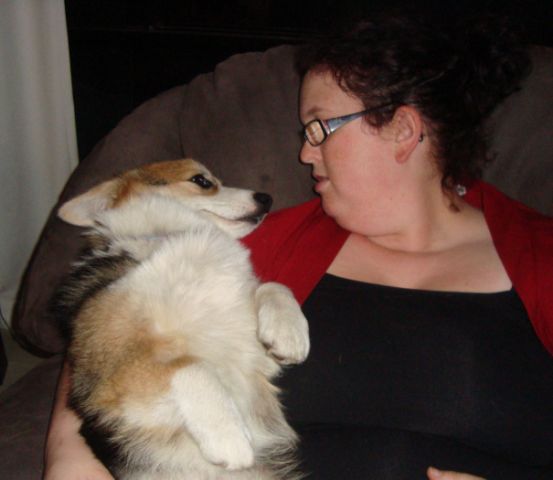 “Scotty and Alice quite often come into the office with me, and they’re starting to know people around work;  they are quite a calming influence around the office. They enjoy riding in the car and know they’re on an adventure when they climb in.”
“They like nothing more then a run up the yard in the mornings and evenings, where Scotty quite often barrels Alice up and tries to have his way with her. Unfortunately for Scotty, he doesn’t quite realize which end is the right end.”
“Our neighbours are the best when it come to our babies. They walk them for us, as we often get home too late, they look after them if we are not home, and if it is storming they take them over so they don’t get scared.” 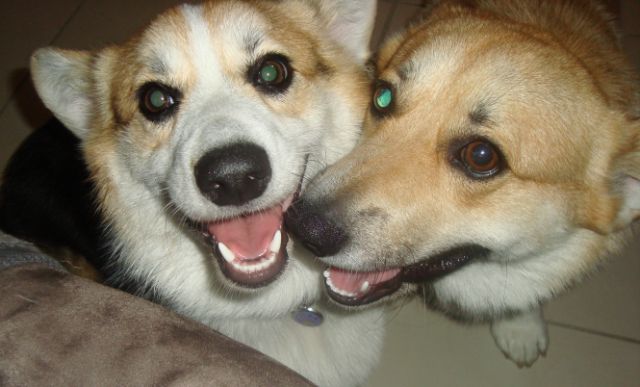 “They only ever get jealous of each other when one is getting attention and the other isn’t — and it’s usually Scotty pushing Alice out of the way.”
“I honestly wouldn’t know life without them.”

Scott and Alice,  you ROCK!

Ten year old Frankie stakes out his favorite spot on the couch. Flooftastic.   Jasper still looks a lot like a puppy, but he ... END_OF_DOCUMENT_TOKEN_TO_BE_REPLACED