“Chunk has been the center of my world (please don’t tell my fiance!) since my sister rescued him over three years ago” writes Corgi Mom Elizabeth. 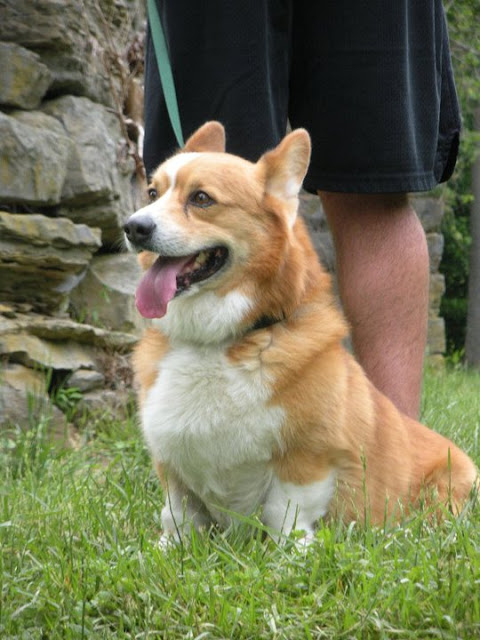 “His name was Sir Tank of Darblin when he was returned to his breeder at five years old.  My sister knows his breeder and surprised me with him, knowing my love of Corgis.  Sadly, he’d been mistreated (the kids hit him on the head with a clarinet!) but you’d never know: he’s so well-trained and really listens. He won us over immediately with his personality and mannerisms.”
“I changed his name to Chunk because the Goonies is one of my favorite movies, and it seemed to fit since he’s a bigger Corgi than most.” 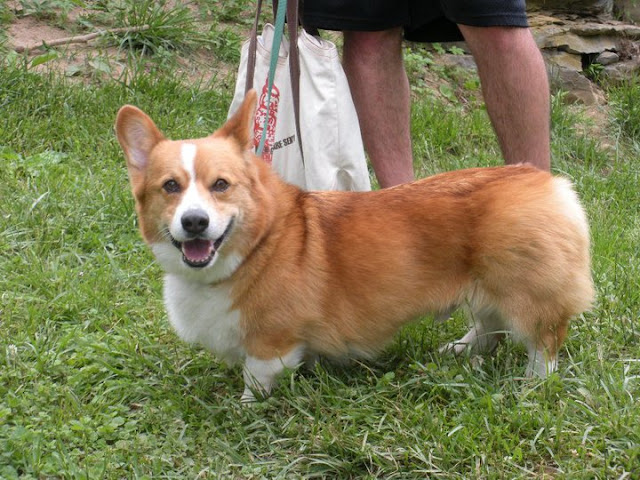 “We’ve been inseparable ever since.”
“Chunk moved from Delaware down to Virginia with me in the Summer of 2008, and loves life in the Shenandoah Valley.  He went through a period of trying to chase and attack cars on our daily walks, but doesn’t mind them as much now. In addition to his walks, Chunk likes car rides, but playing soccer is his absolute favorite activity.” 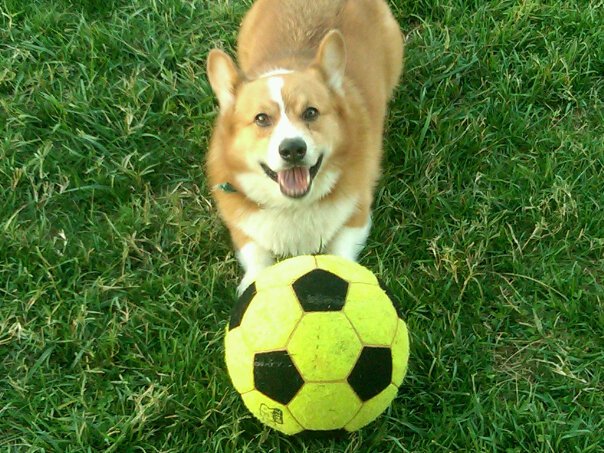 “The mere mention of a soccer ball sends him dancing around, whining and barking!” 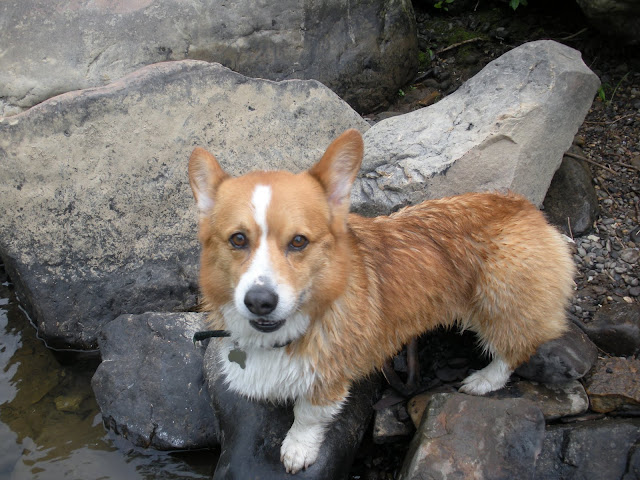 “Swimming is a close second, especially during the hot Virginia summers.”
“Loofa dogs are his stuffed toys of choice;  Chunk does his best to dissect them and remove the squeaker immediately.  (Squeak-ectomy!)  Needless to say, we have a large graveyard full of toy loofas waiting to be sewn and given new life.”
“Like all Corgis, Chunk is very smart and loves to eat. He tries to trick us sometimes with the “I’m starving, he/she forgot to feed me” look, even though he ate thirty minutes ago.   We’re promptly notified when he’s not receiving adequate attention.” 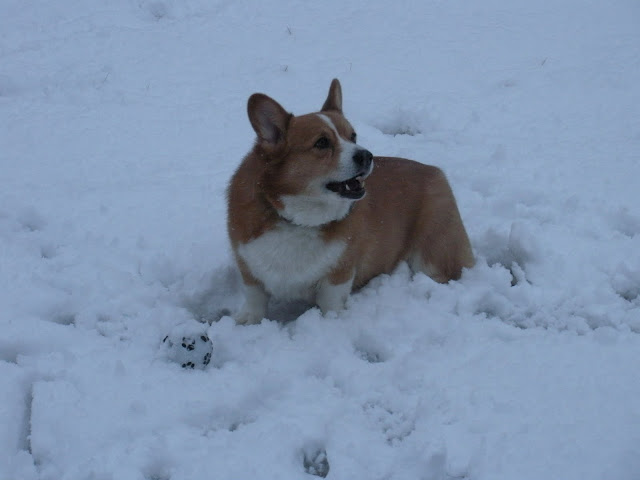 “Chunk is a constant source of entertainment for me and my fiancee.  Certain sounds always set him off.  He could be right near the door or TV when he hears them — or on the other side of the house — and he’ll start up his barking and running.”
The list of irksome-to-Chunk sounds includes, but is not limited to:
insurance commercials (Progressive, State Farm, etc.)
the song “Jump Around’ by House of Pain
Jeopardy Daily Doubles
horses
fans chanting at sporting events on TV
camera flash noises
answering machine beeps on TV
trucks backing up (especially the trash truck at 4:30am)
pop songs, including Jump Around by House of Pain, Toxic by Britney Spears and Firework by Katie Perry
crowds chanting at a sporting event on TV
horse/eagles/other animal noises on TV
fire trucks and ambulance sirens
the sounds of cameras flashing
the Swiffer commercials with the song “What About Love”
the beginning of the Colbert Report (because of the eagle and the chanting that happens every show).
“It seems everyday something new irks him.  I guess we should take the hint and not watch TV!” 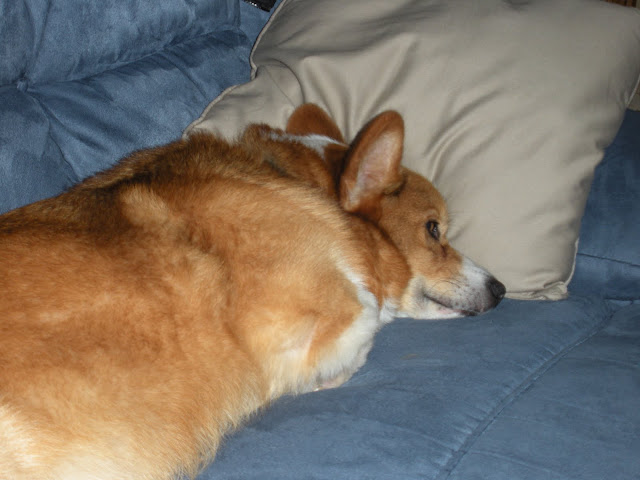 “I bring him to work with me from time to time and he loves the extra attention. I work at a college and students are in and out of my office daily, so when Chunk is there, he knows how to work them — walking right over to them and rolling over so they have to pet his belly. What suckers, he gets them every time!” 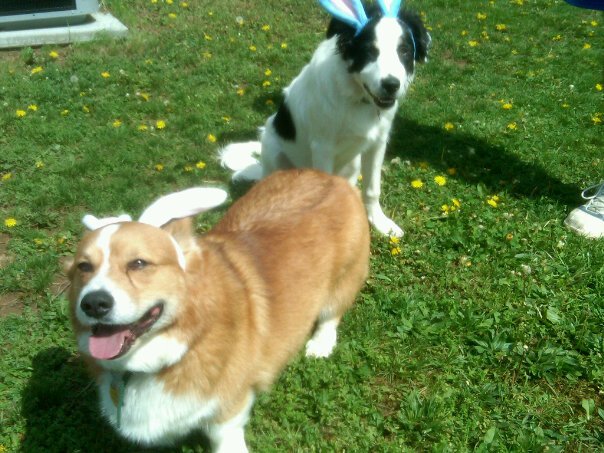 “We recently adopted a shelter puppy so Chunk would have a friend.  Lexi, a Pyrenees/Lab mix, loves him and follows him all day long.”
“It was hard at first for him to share the attention (not to mention the toys!)  He tolerates her pretty well now.  She loves him unconditionally and will lick his face incessantly, despite him showing his teeth and the occasional growl.” 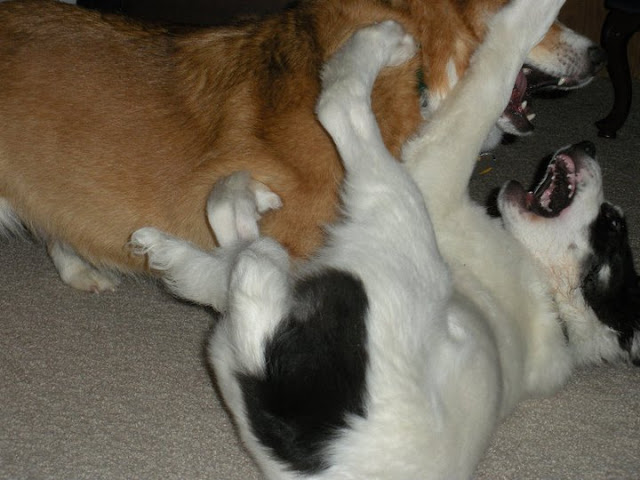 “Chunk and Lexi love to wrestle, run through the house and play tug-of-war with unsuspecting toys. She tries to bite his ears every time she walks by him, (I guess they are just so tempting), and he perpetually has dried spit on his head.  Chunk is “hers” and she can’t be without him.  She cries and carries on if he’s in another room or outside and she can’t get to him.  We’ve caught him him lying by Lexi’s crate when we come home from work, which is good enough for her.”
“Although she outweighs him by 30 pounds (and growing), everyday Chunk makes sure that Lexi knows HE is her boss (and ours too).”

“Chunk’s such a happy guy.  We love him and all his quirks and can’t imagine life without his bossing us around!”
*  *  *  *
Welcome to The Daily Corgi, Chunk!
You are some kind of serious, straight up Corgi POWER!

Ten year old Frankie stakes out his favorite spot on the couch. Flooftastic.   Jasper still looks a lot like a puppy, but he ... END_OF_DOCUMENT_TOKEN_TO_BE_REPLACED