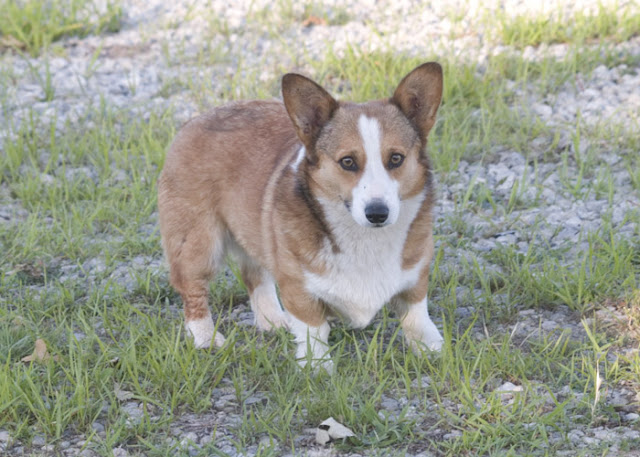 “I explained to her that I was more than two hours away and really couldn’t help with catching the elusive Corgi, but would be more than willing to take the dog into my rescue if she were able to get her hands on her.”
“In the meantime, I contacted the park manager at the lake to see if he could try to catch the dog or even trap it. The park manager was aware of the dog and said he even knew of someone who was feeding it. They didn’t have any live traps, but he said he’d see what he could do. Dead end.”
“In the midst of a heatwave, I was desperate to get this dog. I called the local police department — it was out of their jurisdiction — another dead end. I contacted Mary, a friend who happened to live not far from the lake. She and her son Will, who dubbed the little girl “Trickster”, had spotted her but she would have nothing to do with them. The woman they saw setting out food for the dog told them she came everyday and fed the Corgi, and another person was feeding her at night, but no one could get near her. Mary and Will said they saw the little dog run in to a wooded area where there seemed to be trails. She was fast!, Will told me.” 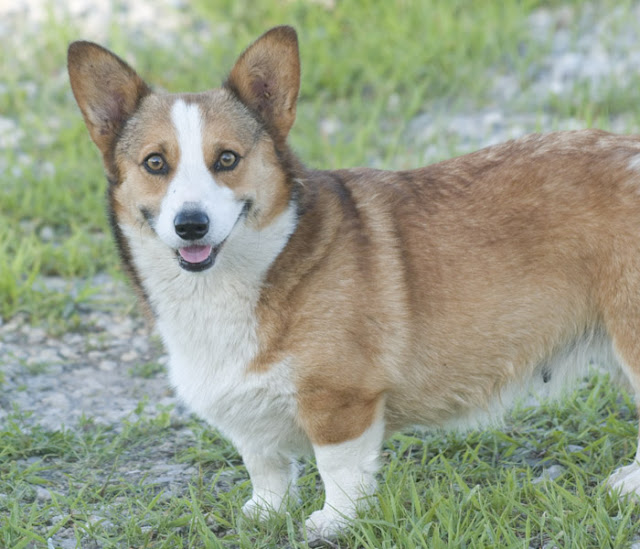 “Tristan, who had initially contacted me, said she’d tried to contact a group in the Kansas City area that supposedly helped catch elusive dogs, but never heard back.  She’d been able to get pictures of the dog, who appeared very healthy, which made me doubt the Corgi was actually a stray.”
“I called the local Sheriff’s Department and spoke to Barney, their wonderful Animal Control Officer. He was aware of the dog, knew she’d been around the lake for months, and had tried numerous times to lure her in, even taking his teenage daughter and his own dogs out to the location in hopes the little dog would seek some companionship. He promised to continue trying.”

“All along, I just couldn’t help but think this dog belonged to someone near the lake. My friend even checked at a couple of houses, but no one seemed to know who owned the Corgi. I wanted to offer a reward for her capture, but Tristan was afraid it wouldn’t lead to good results.”
“A few weeks passed with no more sightings from Tristan, my friend or the Animal Control Officer. While I was still worried about the dog, I kind of put it on the back burner, as I had other Corgis needing help.”
“The week before last, I got an e-mail from Tristan reporting that she hadn’t seen the Corgi the past few weeks, fearing that the dog who had survived heaven-knows-what was gone. However, when she went out last week to the lake area, she saw a man with a black Labrador and another dog that looked familiar … “ 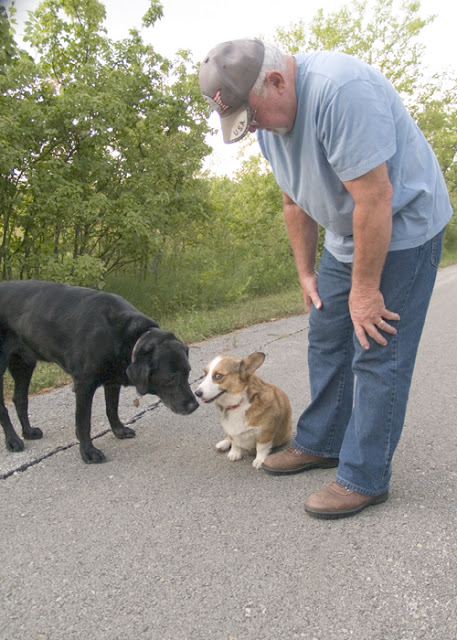 … it was the Corgi!”
“After speaking with the man, this is what she told me: a fellow by the name of Bill had been feeding the little dog for weeks and weeks. Finally, one day a couple of weeks ago, he took some hamburger out to her.  Although she gobbled it up, she wouldn’t come up to him.  Another unsuccessful attempt — or so he thought.  Bill got in his truck and drove away, but this time when he looked in his rear view mirror, she was running after the truck!” 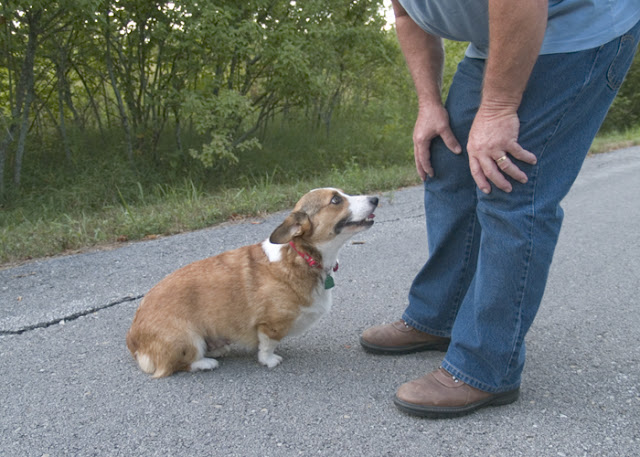 “Bill lives just off the lake property, so he continued to drive and she continued to follow him to his house. According to Tristan, Bill opened the door to his home and that Corgi proceeded to make herself right at home!” 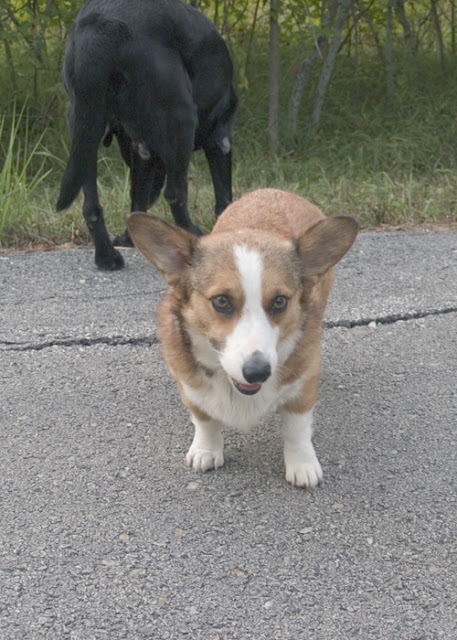 “In Tristan’s words:  He was surprised as anybody … she just made up her mind and went with him. Now Shorty (her new name) won’t let him out of her sight, has been to the vet, and seems very happy. She had the funniest grin on her face and just stared at him the whole time I was talking to him!  Shorty must’ve been auditioning people for all those months she lived down by the boat ramp …
… and she chose him.”
“This little Corgi girl seems to have found her own way home!”
*  *  *  *  *
Welcome to The Daily Corgi, Shorty!
You are one independent-minded little lady!  (Then again, you are a Corgi).

Ten year old Frankie stakes out his favorite spot on the couch. Flooftastic.   Jasper still looks a lot like a puppy, but he ... END_OF_DOCUMENT_TOKEN_TO_BE_REPLACED