His Mom Peggy says Benny’s getting used to the UPS man dropping by with packages just for him, as his prizes arrive one by one.  “He was so excited about those boxes and wanted to see and smell everything.  We’re pretty sure he now thinks all deliveries will be for him.” 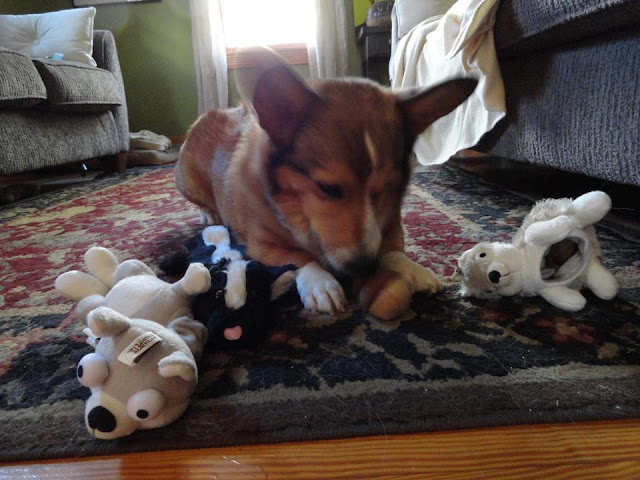 “The first box that came was the toys from PetSmart, so he got to help open that and of course it was for him.  When we first got Benny, he rarely played with toys.  He just didn’t know how to be a dog.”
(Ed. note:  Benny is a puppy mill rescue who just celebrated his “Freedom Day“: one full year since he was busted out of that place!)
“It’s been fun to watch him relax and learn how to play, as he enjoys his toys more and more.  Benny’s never received more than one toy at a time and he was so excited about the three! He kept alternating between them, chewing one and then the others.  I thought later I probably should have given them to him one at a time.”
“NAAAAAAH! It was too much fun, like Christmas for him.”
Keep on playing, beautiful Benny!

Ten year old Frankie stakes out his favorite spot on the couch. Flooftastic.   Jasper still looks a lot like a puppy, but he ... END_OF_DOCUMENT_TOKEN_TO_BE_REPLACED