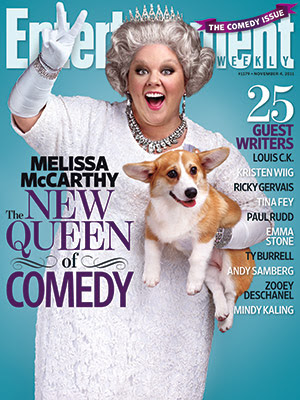 Helllooooo world!
Only Corgi charisma could compete with a cheeky charmer like comedienne Melissa McCarthy, who’s no slouch in the Cute Division.
(Hey Melissa, you rock too!) 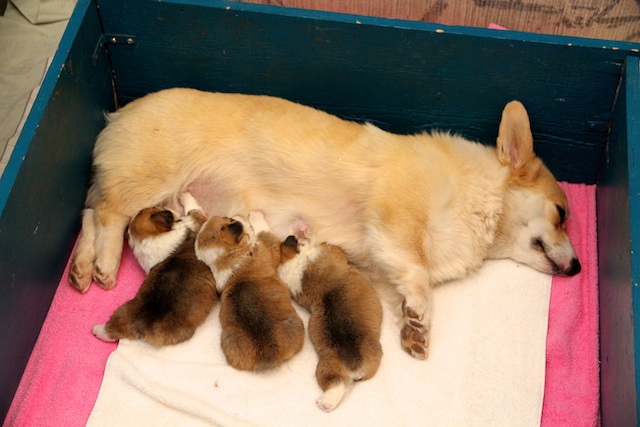 From the day of their birth, Chloe B. and her two female litter mates were destined for big things.  (The proudly pooped out Mom is the lovely Dolly). 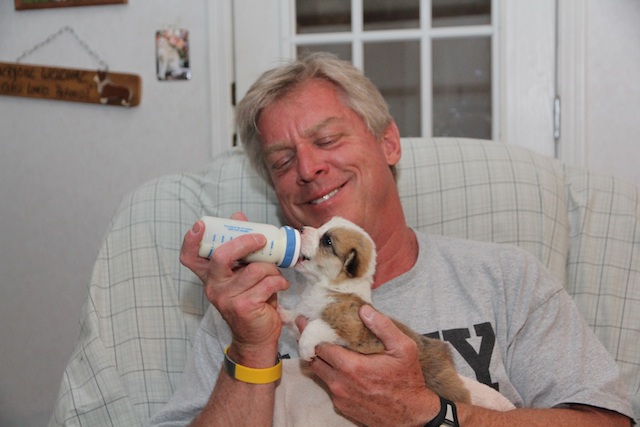 Wee Chloe and delighted Dad Mike B.
“Their bloodlines include a number of AKC Champions and Grand Champions. In Chloe’s early AKC show ring efforts she’s won Best of Breed twice and placed third both times she’s shown in the Herding Group.” 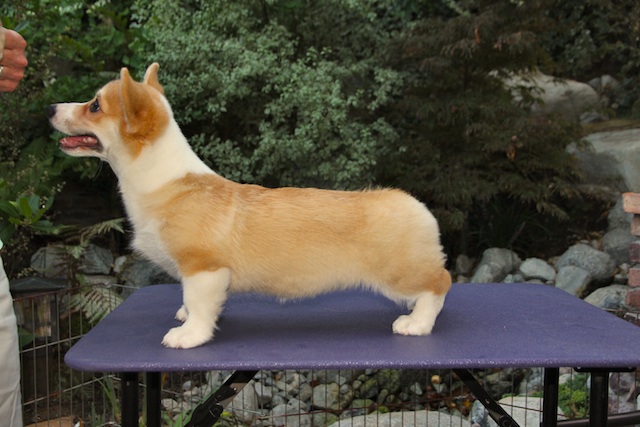 When do the noms show up?﻿ 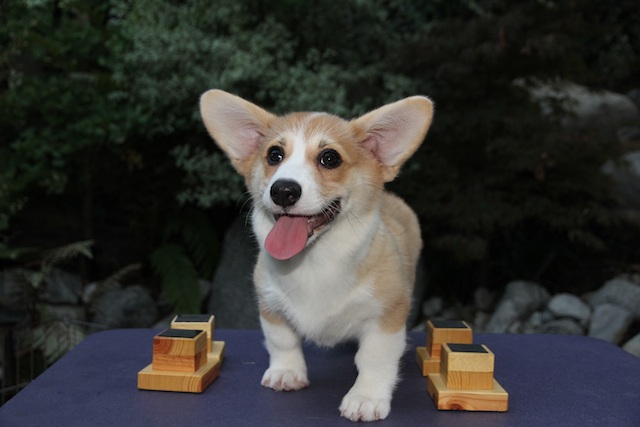 “Chloe is a “natural” in the show ring, with lots of “attitude” (a good thing!)” 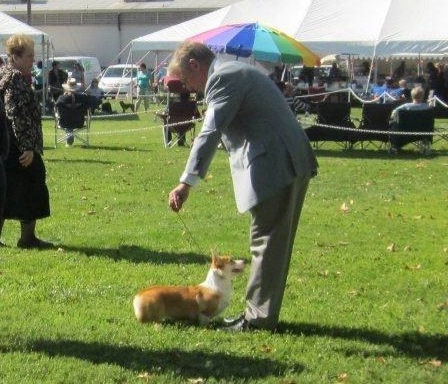 “She’s perky, attentive and has fun.”
With litter mate Addie at a recent vet visit.
“Chloe LOVES to play with her sister Addie.  Both of them live with us.”
Chloe & Addie: Playing 01 from Mike Burk on Vimeo.
Although Addie outweighs her by four pounds, Chloe is the “alpha puppy”. 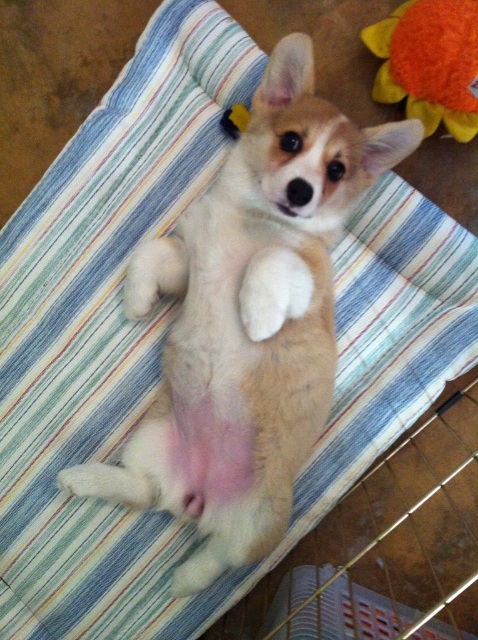 It’s good to be Queen! 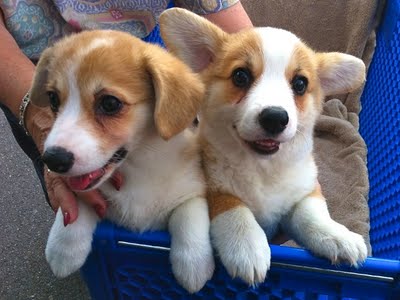 At Petco, where the Corgis go! 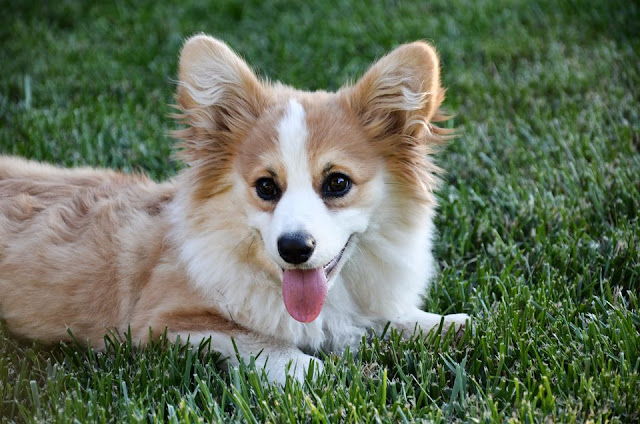 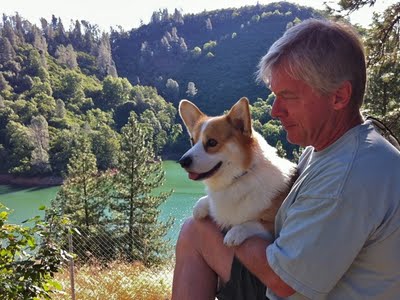 Mike with Chloe’s dad Hank (GCH Pennyshire Solid Alibi), a handsome red-headed tri-color who enjoys getting his ice cream on after wins in the ring.
Her folks Mike and Debbie say Chloe’s like her father Hank, always aware of what’s going on around her, on the lookout for potential playmates.  “She and Hank are best friends who play together all the time. He lets Chloe chase him around the house and in the yard at warp (FRAP) speed.”
“Hank is just over two years old and has every toy he’s ever received, all of them still intact. Chloe, on the other hand, is a one girl squeaker removal squad. We’ve switched to no-squeaker toys now.”
(Master Squeak-ectomist Alert!)
“Chloe knows how to tease her dad and her sister with toys. Just enough to hold their interest, all the while keeping the toys from them.”
Atta girl, Chloe! 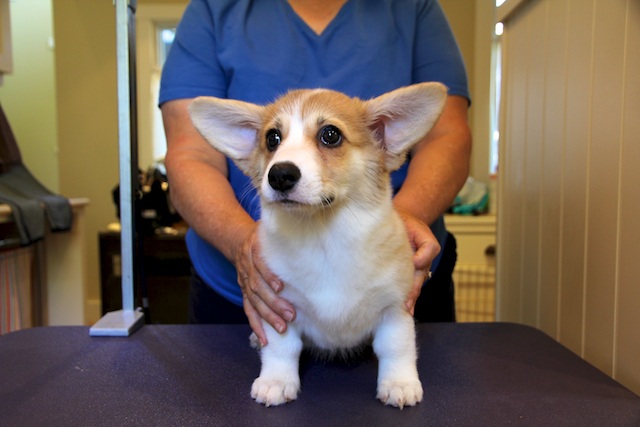 Don’t you know by now that WE are the big dogs?
“As is typical of most Corgis, she’s not afraid of bigger dogs — no matter their size.”
Hank & Dolly Play with Chloe & Addie from Mike Burk on Vimeo.
Chloe and Addie romp with Dolly and Hank. 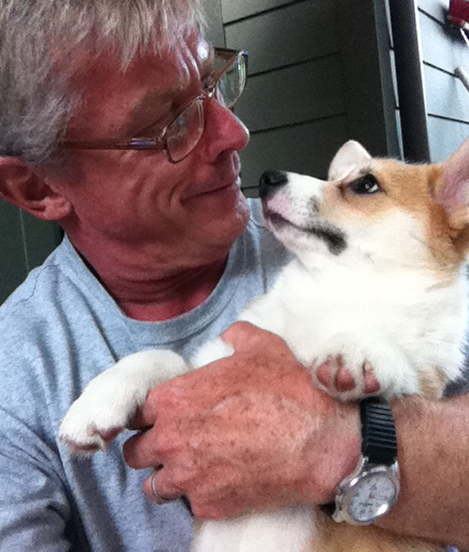 “We’re a block from two schools and a cluster of parks. Chloe makes friends with all the other dogs in the neighborhood and has just discovered wildlife — especially squirrels.”

“She’s the most popular dog on her walks around the grammar and middle schools. Chloe really knows how to “pour it on” for the kids.  “Oh, what an ADORABLE puppy!”
Yep, that sums it up.
*  *  *  *  *
Thanks for giving The Daily Corgi time out of your celebrity schedule, Chloe!  If a pretty gal like you has an “in” with California First Dog Sutter Brown, perhaps you could put a bug in his ear?
Have his people call my people, I’ll bring the biscuits!

Ten year old Frankie stakes out his favorite spot on the couch. Flooftastic.   Jasper still looks a lot like a puppy, but he ... END_OF_DOCUMENT_TOKEN_TO_BE_REPLACED