In 2001, after finishing grad school, Tricia C. adopted Gizmo, a two year-old rescued Pem.  She was living in Alexandria, Virginia working as a foster care social worker, and had always wanted a Corgi after being around them for years at horse shows.
“It was love at first sight for me” writes Tricia. “Gizmo had been given up to rescue for extreme dog aggression and a very poor response to training. He’d attacked the family’s Doberman, tearing her ear and tongue. It took a few years to address the aggression, and as it turns out, Gizmo is a trainable Corgi for a piece of food. I eventually managed to teach him to walk away from dogs he didn’t like rather than attacking them.” 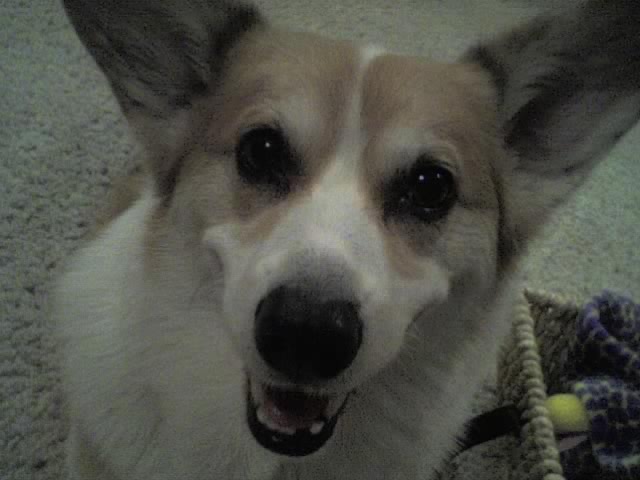 “He now applies that skill to many areas of life.  During a recent visit to a home where two adults and three kids made a wonderful fuss over him, lavishing lots of belly rubs and praise, when Gizmo had enough he simply got up and walked out the door.  Hilarious!”
“He went everywhere with me.  We moved to Austin for another round of grad school, where Gizmo supervised my many hours of study and dissertation work.  We lived together for a long time before I met Jay, my husband.  Gizmo took to him quickly, but carefully maneuvered between us on the couch when Jay visited.  He really liked Jay, but taking care of Mom was still priority number one.” 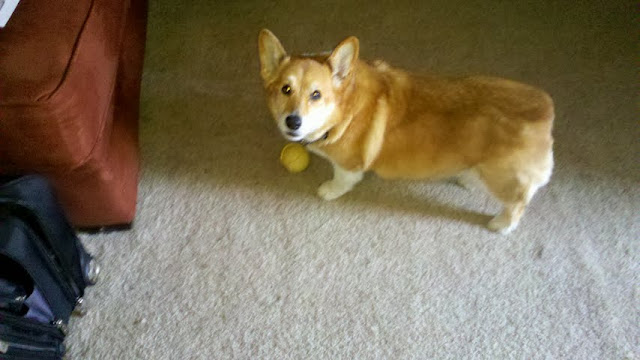 “Once he’d been won over by Gizmo, Jay began talking to talk about wanting his own Corgi.”
“We found Millie, an eight year-old Pem, through North Texas Corgi Rescue.  Despite the report we got about her vision, behavior and allergy problems — along with biting issues — we decided to meet her.” 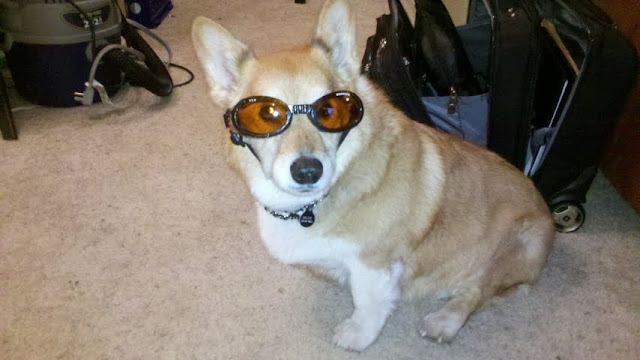 “This time it was love at first sight for Jay!”
“Since her husband’s passing a year earlier, Millie’s owner had grown tired of dealing with the dog’s problems.  Millie — who was her husband’s dog — had been on steroids for years and was 45 pounds when we found her.  The rescue group saved her and we were on board!  Today she’s a healthy 29 pounder.”
“On our second visit with Millie, she came home and moved in with Jay.  On the first day home, she went after me when I thought I saw a thorn stuck on her foot, and a few days later she drew blood from Jay during towel drying after a much needed bath.”
“We began trying to problem-solve for all of Millie’s issues and find a way to win her over.  Jay started bonding with her over cookies and teaching her how to play with toys — she had no idea what a toy was!  From the start, Millie was terrible about going to the bathroom, holding it in for hours and sometimes days.  After getting her checked by our regular vet, we found a chiropractic and acupuncture vet.  Following her first chiro adjustment, Millie walked out and did all of her business!  Because of her herniated disks, going to the bathroom was painful for her. She now gets regular adjustments and acupuncture, and her behavior is totally changed.  He true, amazing Corgi personality emerged gradually, as she discovered a life  without neck and back pain. Being out of pain is a great thing!”
“Today she and Jay share a very, very special bond.  She’s a true Corgi Daddy’s Girl.” 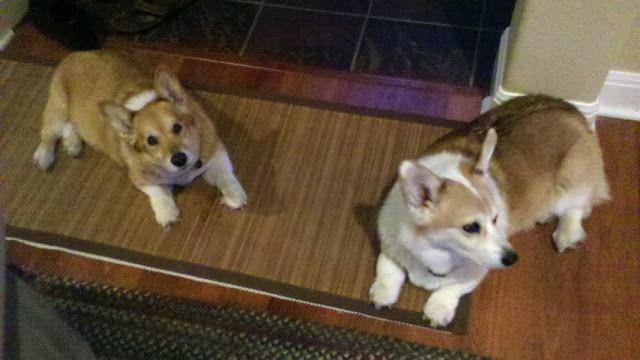 “The next thing we did was tackle Millie’s vision problems. We found the best veterinarian ophthalmologist in Austin, who started her on a regimen of several kinds of eye drops everyday.  We had to develop a system just to keep track of all her eye meds!  Although things improved, over time she was losing some of the vision she had left.  After a couple of years the steroids, pain meds and eye drops weren’t doing the job anymore.  We were referred to a neurologist who told us Millie has some kind of brain disease (maybe tumor or GME).  An MRI was required to make a true diagnosis, but the necessary anesthesia posed a high risk.”
“This Summer, after exhausting all other options we made the decision for Millie to have eye surgery, despite the risk of anesthesia.  We brought in a veterinarian anesthesiologist specialist and Millie did great!  Her procedure went well and she seemed to be healing, but after a week things didn’t seem quite right.  The ophthalmologist found that the incisions around the prosthetics in her eyes weren’t holding, and was very concerned about infection moving into Millie’s brain.”
“Our girl was rushed into emergency surgery a few hours later, and although she did well in surgery, the vet had determined her eyes had to be removed and stitched closed.  We’d worked for over a year to avoid this, and despite doing absolutely everything in our power, we couldn’t save them.”

“Though we were heartbroken, we had no choice but to move forward.”

“Millie is now healing, and although she is sometimes confused about where she is, she’s doing very well.”

“She gets around and is most excited when she gets to go for a ride in the car — one of her absolutely favorite things.” 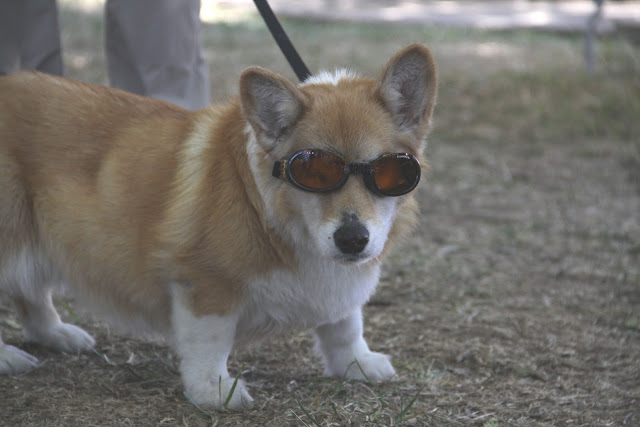 Oh yeah, I make these doggles look good!
Millie was photographed at the recent Corgi Celebration in Buda, Texas.  Her picture is a powerful lesson in appearances deceiving.  Millie is actually quite a lucky dog whose family who claimed her — and her struggles — as their own, in a spirit of radical love and acceptance. 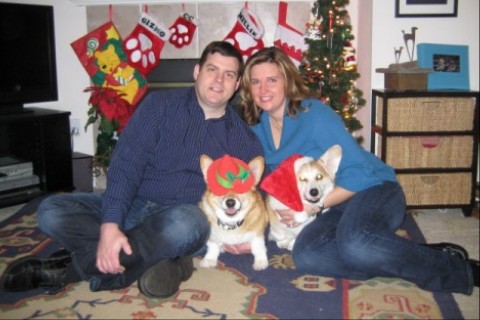 As a wise person once observed, the heart has eyes which the brain knows nothing of.

“In the midst of all this, Jay and I got engaged.  The Corgis helped him ask for my hand.  We were in San Antonio for a conference, and Gizmo ran into the hotel bedroom with a t-shirt that said “Will you …” followed closely by Millie sporting a t-shirt that said “Marry me?”  Jay’s proposal and a spectacular ring completed the deal!”
(From a Corgi gal’s point of view, might I say WAY to GO!) 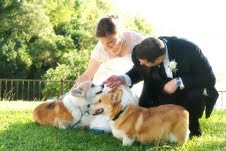 “With this Corgi, I thee wed.”
“Gizmo and Millie were at our wedding reception and remained with us at the hotel that night. Our rescue Corgis are the most incredible blessings in our lives; we feel far more rescued by them than they could possibly feel about us!”
*  *  *  *  *
Welcome to The Daily Corgi, Gizmo and Millie.
Three cheers for rescued Corgis and happy-ever-afters all around!

Ten year old Frankie stakes out his favorite spot on the couch. Flooftastic.   Jasper still looks a lot like a puppy, but he ... END_OF_DOCUMENT_TOKEN_TO_BE_REPLACED