Heather L. writes “Six month-old Mabel came into our lives in January of 1999. She was a gift to my then 10 year-old son from friends because she wasn’t getting along with their older Pembrokes. She was a horse show dog that my son played with every time her owners came to town, and they felt she’d be happier with our family. Mabel got along very well with our tolerant Golden Retriever and quickly charmed her way into our hearts with her full-speed-ahead approach to life.” 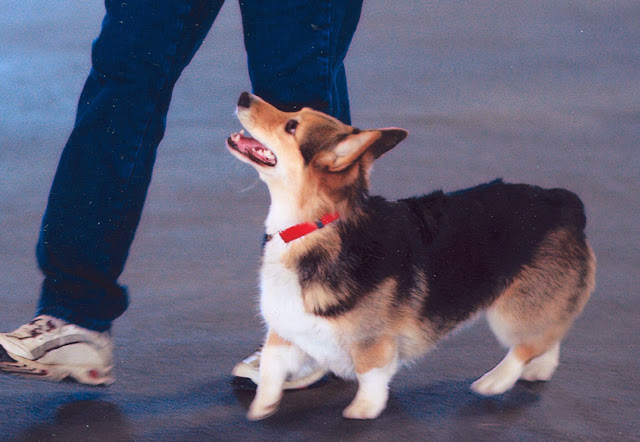 “My son took her to 4-H obedience classes for two Summers. Although Mabel loved working in obedience, the 4-H shows were not my son’s favorite activities, and he readily allowed me to take over her training in January of 2001. We took agility classes and competed a little in Canine Performance Events (CPE). In the Fall, following a minor injury, I had her hips x-rayed and was told she had hip dysplasia and should cut back on her activities, except for walks.”
“Retirement was not what Mabel had in mind, so we continued with some light obedience training on and off for several years. In 2004, we discovered APDT rally, which Mabel enjoyed tremendously. She earned great scores and many titles (in AKC rally, too), including the APDT Rally Champion Extraordinaire in 2007, at the time the highest title offered by APDT.” 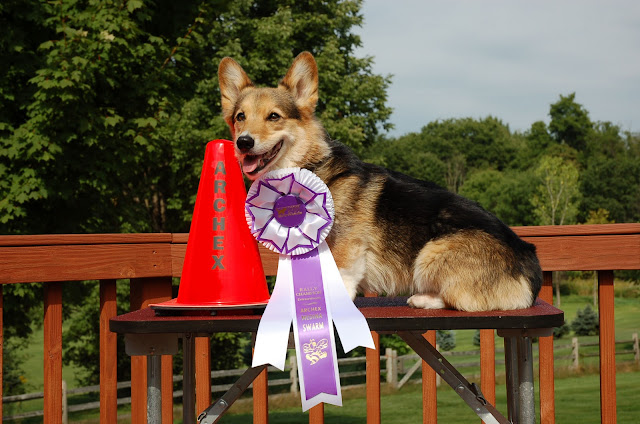 “Along the way, I learned a lot about training. Mabel has always been very wary of other dogs and tended to be reactive. With the help of a wonderful obedience instructor and advice from the many friends I met at the APDT trials, I learned to build both her skills and confidence using positive reinforcement. She is great fun to train, though we can only repeat an exercise a couple of times. Otherwise, she figures she’s done it wrong and offers a new behavior. This has provided much entertainment!”
“In 2001, Parker (another Pem) joined our family, and his quiet, confident demeanor set a good example for Mabel. In 2005, Sonny (yes, another Pem) came along. He was a goofy youngster, would chase Mabel and even pull her ears, and she was surprisingly tolerant of him. We lost our sweet Parker in 2009. Young Dexter (of course, a Pem) flew in from California in June of 2010 and brought us back to the joys of three dogs. Mabel likes her ears rubbed and her neck scratched, but she’s very happy to let the male dogs be the cuddlers while she monitors the house and the neighborhood.” 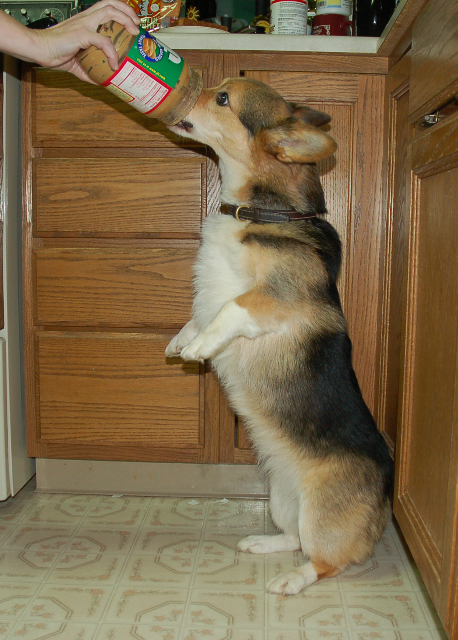 “We tried sheep herding, but my lack of knowledge and confidence made it difficult. While she was laid up with a broken toe, I decided to pursue herding with Parker (who loved herding and was very tolerant of my mistakes) and stick with rally with Mabel. She did earn her Pembroke Herding Certificate at an instinct test several years later.”
“When the obedience and rally venue of C-WAGS started up in 2007, Mabel and I found more skills to learn and she earned more titles there too.”
“In the Spring of 2009, while I was puzzling out some agility maneuvers with my young dog, I began  practicing them with Mabel. She never showed any problems with her hips, which I’d had X-rayed several times over the years, and they showed no changes.  She returned to the agility ring, jumping 4 inches (no full-size contact equipment), and earned a couple of CPE agility titles.”
“She made her AKC agility debut at age 11 at the Pembroke Welsh Corgi Club National Specialty in 2009. She won the 4 inch Novice Jumpers with Weaves Preferred class!” 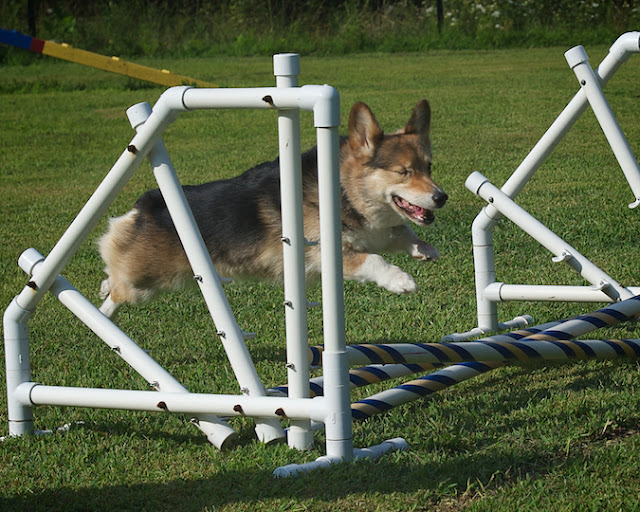 “In December 2009, Mabel developed a tumor in her right eye. The entire eye had to be removed, but she recovered quickly (the morning after the surgery, during her leash walk, she dragged me to the fence line, not to be deterred from her morning patrol. By February, she was back in the agility ring, and finished her AKC Novice Jumpers with Weaves Preferred title.”
“She continued to dabble in CPE agility, C-WAGS rally, and APDT Veterans rally through 2010 (x-rays showed still no changes or additional arthritis in her hips, but surprisingly, she had arthritis in both shoulders and her right elbow and carpal joints). She attended one Teacup Agility trial and thoroughly enjoyed tackling the smaller-sized contact equipment).” 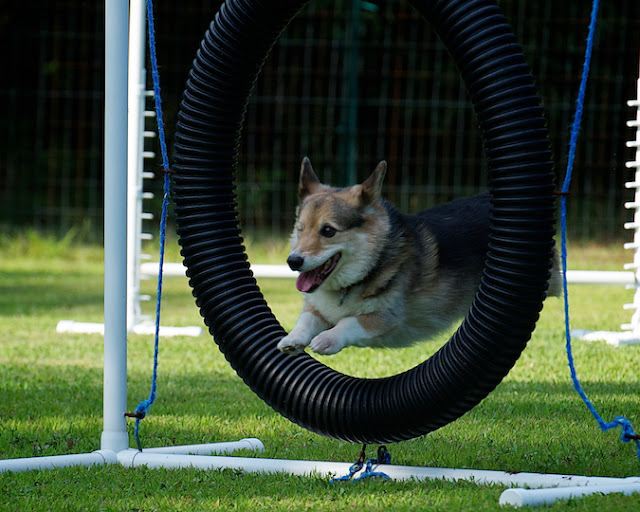 “In mid-January 2011, I noticed her starting to drag a hind toe occasionally and to wobble a bit when she turned. Her Degenerative Myelopathy DNA test showed her to be At Risk, so I had x-rays and an MRI done of her back to rule out other possibilities. All were clear, so we are assuming she has DM. In March she began twice weekly visits for physical therapy and a water treadmill workout.”
“Mabel is now 13 and a half. She currently has very limited use of her hind legs. She drags herself most of the time. She does not like to use her cart unless she has a job of some sort. She loves to walk/run in her walkabout harness. She now wears a floatation jacket in the hydro tank and needs help getting the left hind leg forward each step. She has cataracts developing in her remaining eye, but still seems to see quite well. Her hearing is not very good, but now the thunderstorms don’t bother her very much.”
“In October, she returned to the C-WAGS rally ring in her cart for the Zoom 1 class (no sits) and earned a perfect score and 2nd place.”
“After her eye surgery, a friend referred to Mabel as an Indomitable Spirit. This is her most fitting title. She has let nothing stand in her way — broken toes in 2005 and 2007, hip dysplasia, arthritis, an eye tumor, and the progressive loss of the use of her hind legs. She has been a wonderful training companion, tolerant of my training mistakes (yay — new behavior, more food!), and a joy to take in the ring in all our fun pursuits. She sleeps a lot more now and plays a lot less, but is still the little spitfire I brought home from the horse show 13 years ago.”

Mabel, on top of your string of titles you can now add Daily Corgi Dog of the Day!  Welcome!

Ten year old Frankie stakes out his favorite spot on the couch. Flooftastic.   Jasper still looks a lot like a puppy, but he ... END_OF_DOCUMENT_TOKEN_TO_BE_REPLACED