Note:  If the images in this post do not appear, you can view many of them here.

This is a story about a winning smile, an open heart, and a love that was meant to be.
Sounds like a “romance novel” doesn’t it? Well it is, sort of. After a lifetime of owning Terriers (Terrorists as some call them) — every type from Cairn to Border to Schnauzer to Schnauzer-mix — Deb and Don C. have finally come over to the Corgi Side!
“After losing our last two dogs to cancer — A sweet Border Terrier and an adorable Schnauzer mix (both rescues) — two months apart, we knew we were ready for another breed. It would be too painful and not fair to the dog to compare them to their predecessors. So we started a search on Petfinder.com. Weeks went by, and out of the blue a face appeared that was IMPOSSIBLE to resist!” 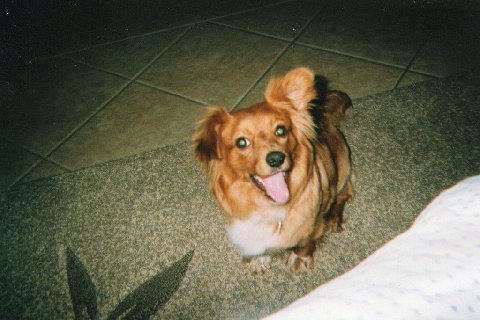 Just look at this SMILE!!
“Miss Dixie was at a high kill shelter about 75 miles away and we had to work fast. Thanks to the support of the local Humane Society and some fancy driving and footwork from our dear friends Melanie and Jenny (we couldn’t have done it without you both), we were able to bring Miss Dixie to her forever home with us. The folks at the Humane Society had informed us that she had a birth defect on her front paw, which was probably the reason she was surrendered. Since we had experience with “physically challenged” rescues before, we were unfazed. Luckily for us, so was Miss Dixie! Though visible in the photo below, she never lets her special front paw interfere with her fun.” 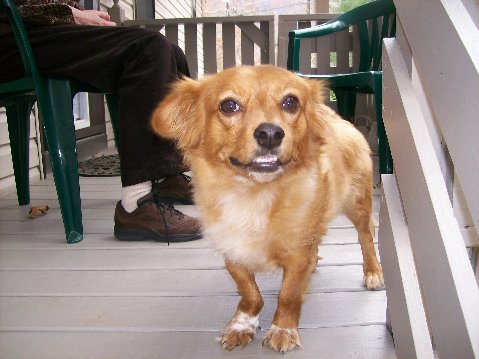 “Miss Dixie was born on February 9, 2009. She is half Pembroke Welsh Corgi and half Ruby Spaniel Mix. As you can see from her early photos, she was very shaggy and “fluffy” when we brought her home. She is mostly ruby colored, but has the trademark white paws and blonde markings on her chest and “undercarriage”. She also has adorable back “drummies”, but her ears lie flat. She may look more like the Ruby Spaniel, but her personality is ALL CORGI!” 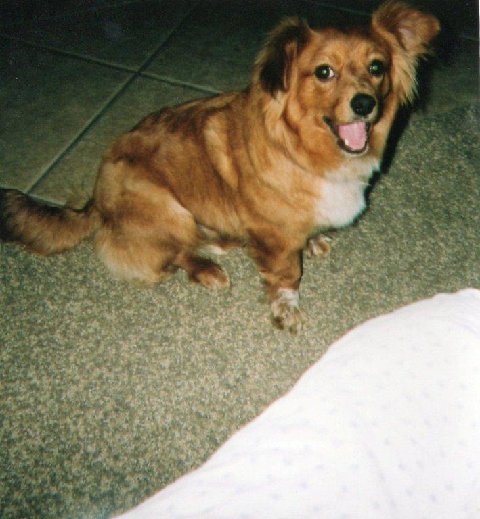 “Shortly after bringing her home, she treated us to a FRAPPING session. We got hysterical watching her dart from place to place, never stopping until she was exhausted and fell into a “Corgi Bliss” pose. She didn’t know how to play with toys, but she is fanatical about her chew sticks.  Dixie started out with 10″ retriever rolls (see photo below) but quickly graduated to the 13″ pressed rawhide bones. She is a real chewing machine, but has never bothered anything but her chew sticks!”
“The photo below shows her after her first Summer haircut. We live in the beautiful north Georgia mountains, but it gets warm in the Summertime, and when she gets her short haircut, she reverts to puppy level energy, so we try to accommodate her.” 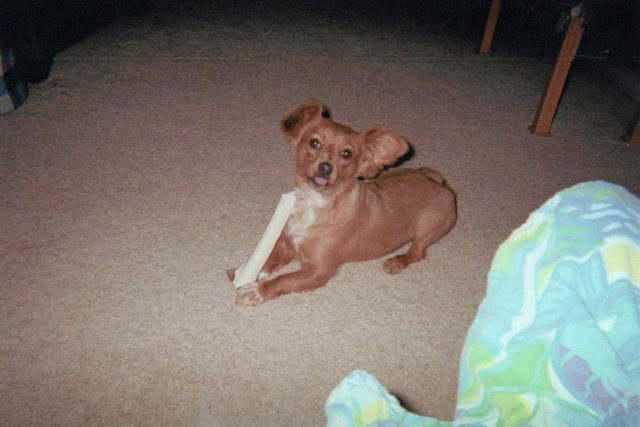 “Miss Dixie has the full complement of mountain denizens to protect us from: squirrels, raccoons, birds of all sorts, deer, occasional bears, and her favorite, CHIPMUNKS! Though her yard is completely fenced and she patrols it numerous times each day, she never shirks her duties to keep the other critters out of her backyard.” 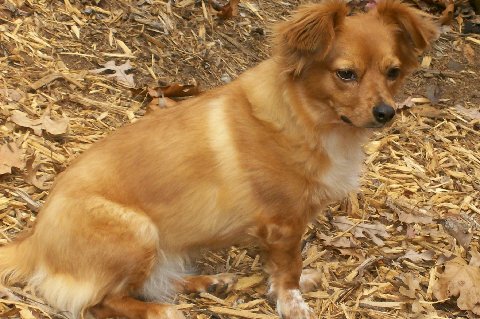 “Here she is concentrating on what she thinks is a chipmunk! She likes Fall, because she can so easily blend in with the falling leaves.”
“Even though she likes Fall, she LOVES Winter! This is where the Corgi in her takes over completely! She prefers snow up to her chin, but as you can see she’ll blaze her own frapping trail in any amount of snowfall and will come in only when we yell “cornbread” (muffins, her favorite treat).” 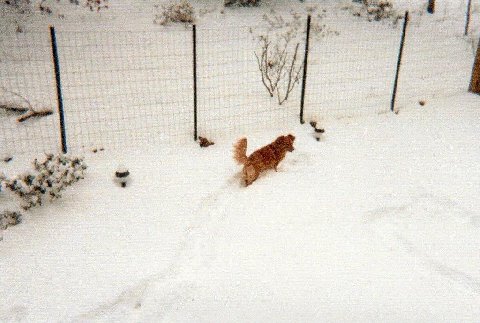 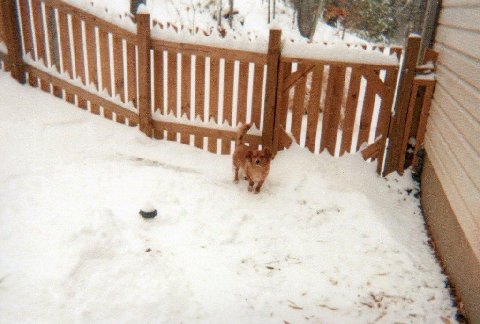 “Sometimes though, even the snow bunny Miss Dixie has to answer the call of nature! Can you see where the yellow went?” 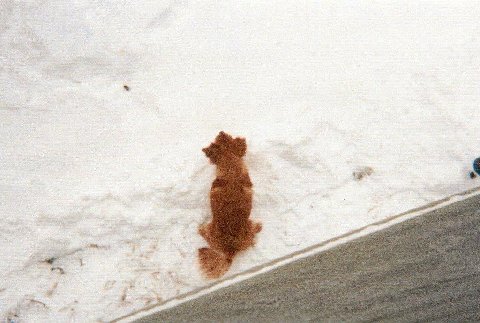 “Because we’re at a high elevation (2500 feet), we have a good amount of snowfall each year, but even Miss Dixie has to come warm up by the fire occasionally. This usually leads to a chew toy session. When she’s finished chewing, she always hides her chew toy under her bed covers before napping. We think she was in a household with other dogs and she wanted to keep her toy away from them. She also has a small scar on her nose where her vet thinks a larger dog bit her — this may explain the toy hiding too, or it may just be protective Corgi behavior.” 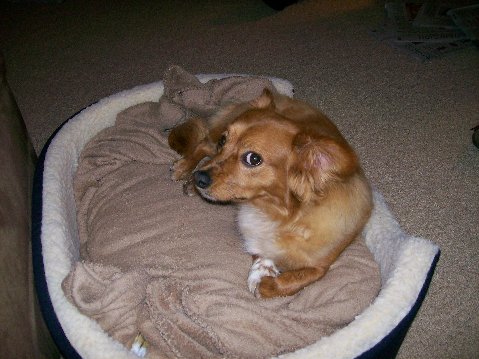 “Miss Dixie is only half Corgi, but her personality is SO Corgi! She’ll stop whatever she is doing to flop over for a tummy rub. She will “herd” her people through the house and watches over them when they are out of her sight.  She sits outside the bathroom door when we are in the shower. Dixie is the MOST patient dog we have ever had; she will sit at her dish forever, waiting for that treat of a small morsel of cornbread (a true Georgia Peach!). She has her little rituals — she must kiss everyone on the nose at the dinner table BEFORE we start eating, and then she retires to her place, behind her “Mom’s” chair.”

“She is ready to go and will FRAP at the drop of a hat — her tail wags endlessly — even when she is dreaming– some dogs “run” in their sleep, Dixie wags her tail in her sleep.”

“We are telling her story to encourage folks who love Corgis to consider Rescues. Dixie was just over a year old when we adopted her and she is a true goodwill ambassador for Corgis. We have become Corgi Crazy like so many folks on the web, and will probably never have any other breed. We love her despite her “handicap”. It’s a good thing she is “handicapped” — if she were any faster, we would never catch her — and she really doesn’t know she has a bad foot.”

“Miss Dixie is the happiest dog we have ever seen and EVERYONE who meets her falls instantly in love.  Who wouldn’t, with a SMILE like this?”

Welcome to The Daily Corgi, Miss Dixie!
You are completely peachy!

Ten year old Frankie stakes out his favorite spot on the couch. Flooftastic.   Jasper still looks a lot like a puppy, but he ... END_OF_DOCUMENT_TOKEN_TO_BE_REPLACED