Alex’s Sweet William (Willy), her last Corgi, passed about three years ago and she wasn’t going to get another dog until her son was off to college, so she was going to give herself three to four years and not have any dog at all.

A year and a half ago, a sad situation came up where a woman in northern California took her own life and left behind her two Corgis.  Alex’s mother, who lives nearby, asked if she wanted to adopt them. ” They were both very special needs with huge health issues” writes Alex. “I wasn’t in a place where I could take two special needs dogs.” 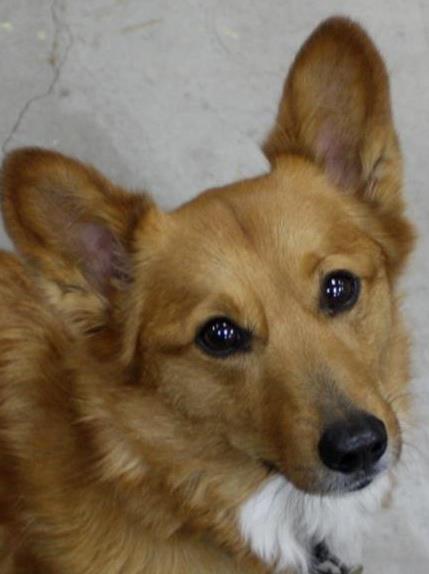 “In considering that, I realized I was open to having another dog if the right one came along. Just by a fluke, I happened upon the website for the Camarillo Animal Shelter, which is a high kill shelter here in Ventura County, and there was this gorgeous Corgi. Apparently he’d been found as a stray down near Los Angeles, and he still had a collar and tags on, but nobody claimed him. Because of the tags, they kept him at the shelter in LA, then moved him to Simi Valley, and then to Camarillo, so by the time I met him, he’d been at a shelter of some kind for a long time. (Nobody ever answered the phone number on the tags, so my guess is that someone might have died).

It was love at first sight, but he wasn’t being released for five days more, so I had to wait. I visited him every day, brought him a Greenie and talked to him. The very first day he stood up on his hind legs to greet me and I was in love. He was very overweight and had lost a lot of fur, but even though I wasn’t allowed to touch him or visit yet because the hold wasn’t up, I told him to “sit” and he did. 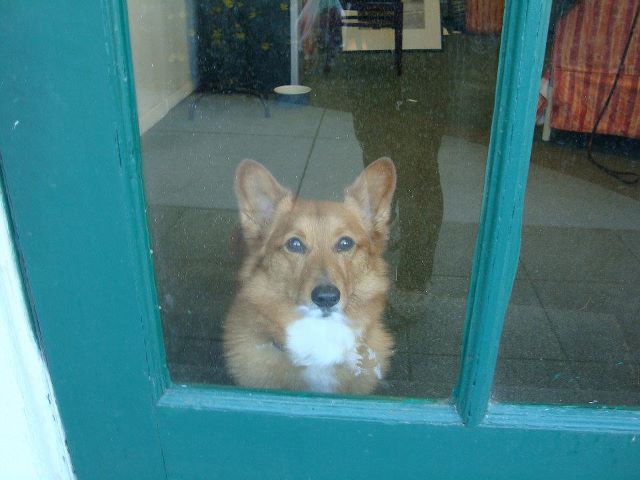 Friday came and I got to the shelter three hours earlier than they opened for adoptions. I was first in line. Actually, I was the ONLY one in line for 2-1/2 hours! 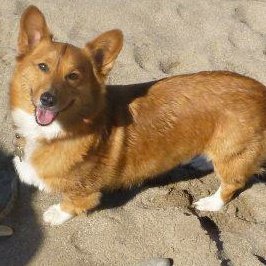 After chatting with the woman behind me, eventually we figured out that she was Jane Zweig of Bark Rescue, where I’d rescued Willy from eight years before that. She agreed to stay and if she won the drawing, she’d give it to me. So now it was just me against the third woman in line.

I said a prayer that I would accept whatever fate had for us, that whatever happened, I would just go with it. The 3rd woman won the drawing, and Jane was 2nd and I was last! Well, all that surrender and acceptance went out the window, and I burst into tears. We were all invited to go back and meet the Corgi in person, so we trudged back there to the grass patch and I got on the ground with him, took photos, basically got started bonding with him. I vacillated between cajoling and crying, until that poor woman finally gave in, saying “I think you really need that dog.”

I said, “You’re right, I really need this dog.” So much for surrender and acceptance!

I brought him home, not knowing a thing about him, but knowing he was meant to be mine, and we’ve hardly spent any time apart ever since. 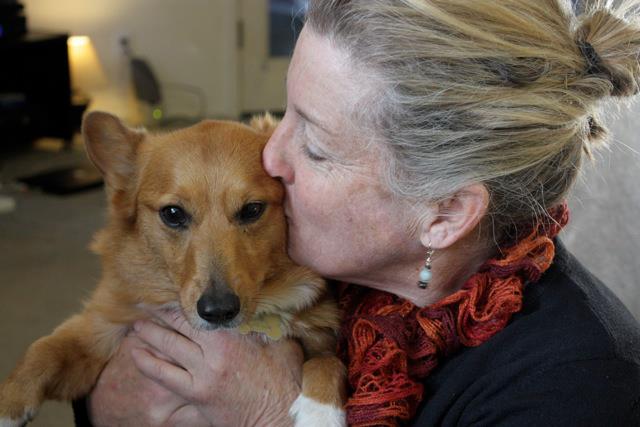 I soon discovered that Otis is one of the fastest dogs I’ve ever known, and can beat almost any large dog running across a field for a squeaky tennis ball.

He also LOVED behavior classes with Shannon Coyner and one lesson with Kimberlee Esler, where he and Stuart (her Corgi) learned to stay in their place on a surf board. He adored learning agility, and we were hoping to get into it next Fall when my son was off to college.

Otis is the smartest dog I’ve ever had, by far. He figured out a good way to wake me up was to pull the pillow out from under my head in the mornings. Otis — aka “Otis Ready, Sitting on the Dog of the Bay”, “Otey Patotey” — what a vision to wake up to! 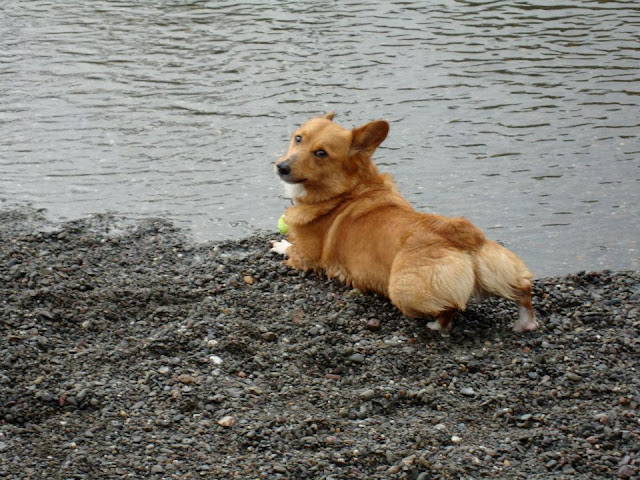 He’s always loved water. I’ve had retrievers that didn’t love water as much as he does. He’ll run to fetch a ball, and then make a point of taking it out into the surf at the beach. Sometimes just to walk in the water, other times to watch the ball be pulled out in the undertow and come back again. (He also helped judge a surf competition last summer).

Otis has the funniest non-whine sound that he makes, it’s more of a low growl-talk that I have never heard any dog do before. When he can’t reach something he’ll do the sound and then go over and point at what he’s trying to get at. I can tell he’s trying to not whine and not bark, but it comes out this really funny, low sound, similar to a goat. Very unusual sound for a dog! 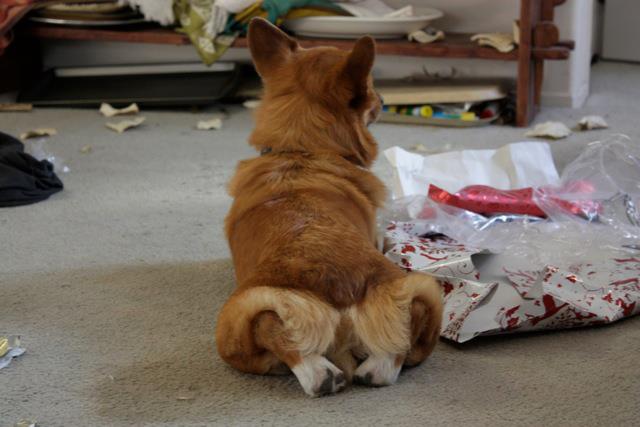 He’s always been a great communicator. He will run at the wall with the leash and chest bump the leash, then sit and look at me. Doesn’t get more obvious than that. One time  when we were at my office, he was letting me know he had to go out. He’s usually very low key, but this day he ran at the door and stood up and scrabbled at the glass panes and looked at me. This was not typical, so of course I got up and opened the door and he ran out and threw up. I guess he didn’t want to throw up inside on the carpet.

Otis comes to work with me every day and sits in my office, and he sleeps with me at night. The days when he stayed home, I felt depressed, his face never failed to cheer me up. 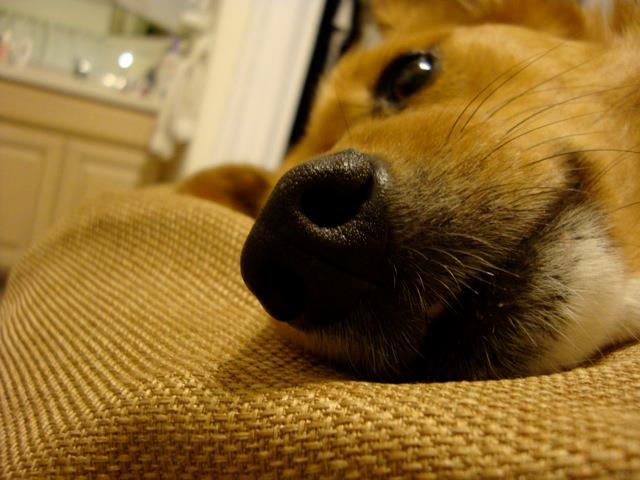 I have said many times, and to many people, that this is my favorite dog that I have ever had and how glad I am that he’s only three or four, because we have another 10+ years together, and had so much we were planning to do.

So the fact that Otis was diagnosed with aggressive lymphoma just a week ago came as such an enormous blow. I’d taken him to the vet for what I thought were fatty cysts under his armpits. I thought nothing of them, believing them to possibly be something that could be unsightly, but not serious. How wrong I was. The type of lymphoma he has is untreatable and, according to the vet, “the bad kind.” He was given anywhere from 4-8 weeks. 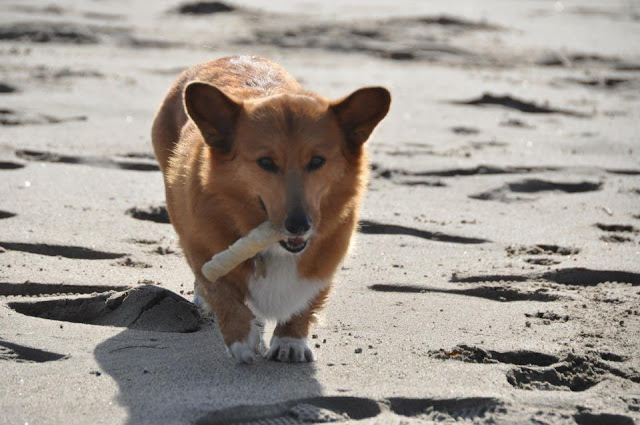 The hole that will be left in my heart and my life will be the most enormous crater. Otis has only been in our lives for a year and a half, but his life has made the biggest impression on ours of almost any animal I’ve ever known, or certainly had the joy of owning.

I can hold it together during the day, but at night, as we watch TV together and I look over and think about sleeping without him, my heart breaks into a million pieces. This will be a very hard transition, but I also know that there are so many Corgis and other dogs, up at the Rainbow Bridge and he will be having so much fun up there, and will live in my heart forever. 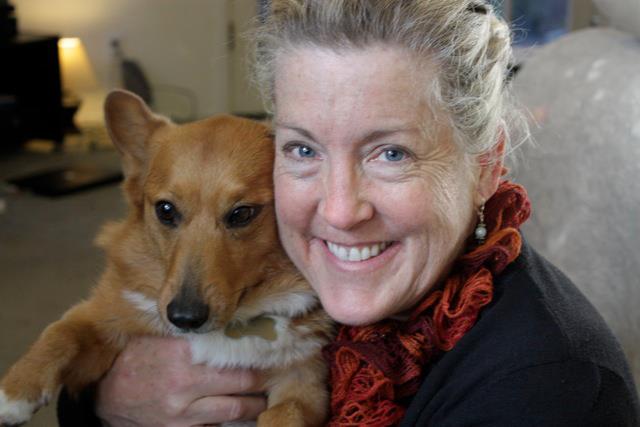 I will always cherish the short time I had the great honor of being his Mom.”

Ten year old Frankie stakes out his favorite spot on the couch. Flooftastic.   Jasper still looks a lot like a puppy, but he ... END_OF_DOCUMENT_TOKEN_TO_BE_REPLACED