Every now and then, because of the blog I’m fortunate enough to be able to share an extra special story of a rescue dog and the family who loves him, no matter what.  This is one of those stories. 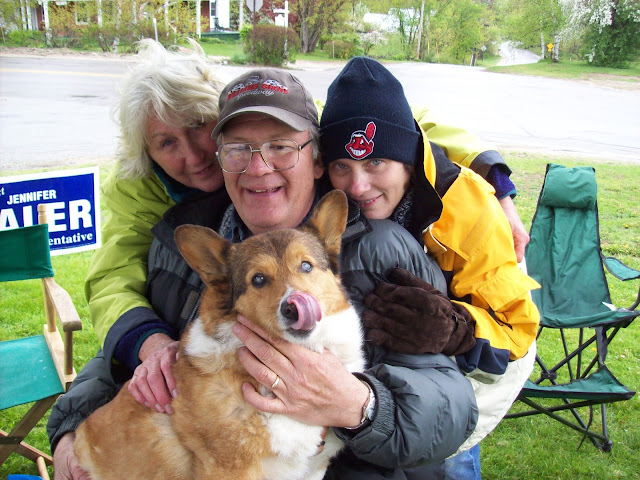 When Peter and Lorraine V. met Benny ten years ago, it was love at first sight.  Although he was just a little over two years old at the time, not much was known about his first few years and it didn’t appear he’d had much attention.
“We had always been “cat people” says Lorraine, “but several years ago, perhaps because we were empty nesters, we began thinking about getting a dog. Our cousins from Ohio have had Corgis and on a visit with us here in New Hampshire we got to talking about dogs in general and Corgis in particular. They returned to Ohio and picked up their Corgi from the kennel, which was run by a woman who also runs a Corgi rescue. They met Benny, took pictures and emailed them to us.” 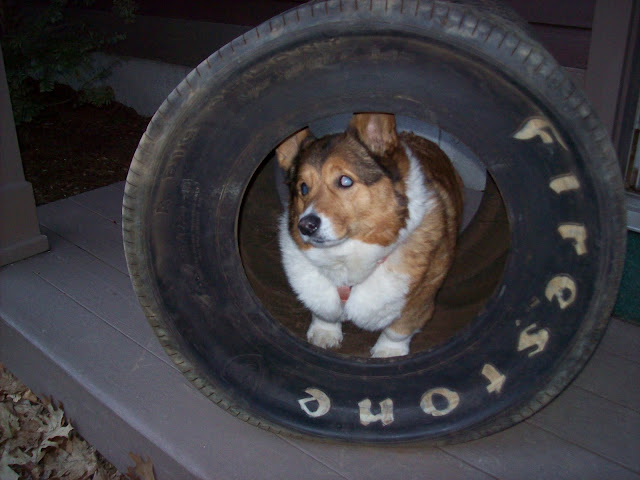 “People ask why we went all the way from New Hampshire to Ohio to get a dog. We had been planning a trip to visit our daughter and her family in Michigan, so it wasn’t that far out of the way. Benny loved the ride home. On a stop at a dog walk area on the thru-way he made it clear to other dogs that we were his people by peeing on Peter’s shoe. We were learning the ways of dogs.” 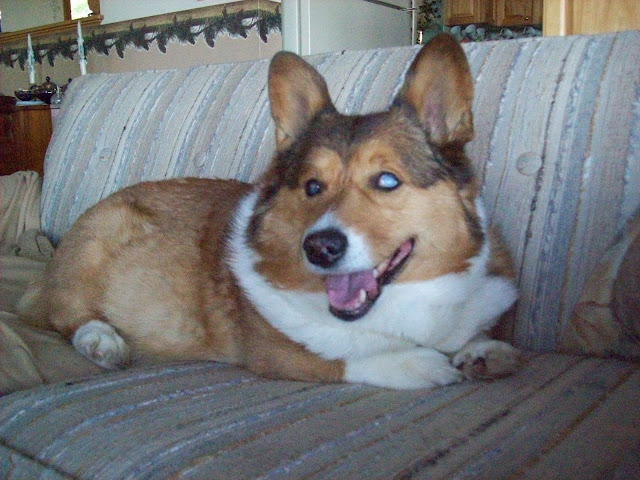 “When we arrived here he wouldn’t let us out of his sight. As soon as I went from one room to the next he would follow.  Peter runs a part-time business from our home restoring antique motorcycles and race cars, but the noise of the engines and workshop machinery didn’t bother Benny a bit. He’s grown to love being wherever Peter is, and especially enjoys it when people come to visit. He only barks when he’s not getting as much attention as he thinks he deserves. No one comes into the shop without rubbin’ the dog!”
“It soon became apparent that he really didn’t know how to play. A bouncing tennis ball at first confused him. We finally discovered that he liked to chase a basketball. Actually, “like” is not the word … it’s his passion. We would throw the ball and he would herd it back to us until we were all exhausted. The game became known as “Benny-ball”. “Ball”, “ride” and “treat” became his three favorite words.” 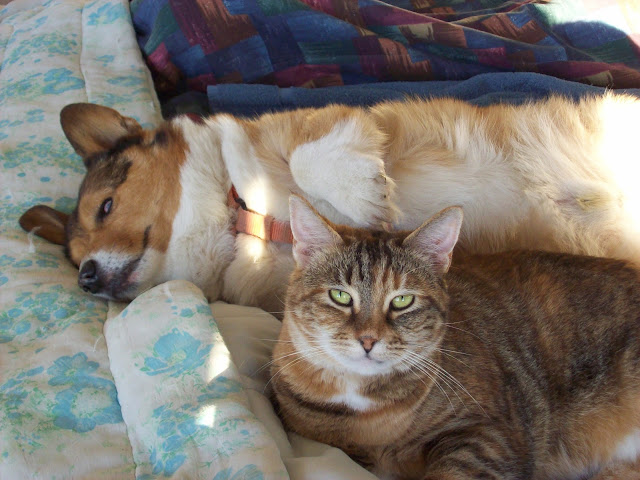 “Life was pretty good for all three of us until one day in the Summer of 2006. As I was getting ready for work, my heart sank as we heard Benny fall down the stairs … the same stairs he had run up and down hundreds of times. We took him to our vet that morning and he sent us to a Veterinary Ophthalmologist. He was a kind and experienced man who told us that Benny had progressive retinal atrophy (PRA). There was little that could be done. We were devastated. It was so sad to see Benny rub his eyes in confusion.” 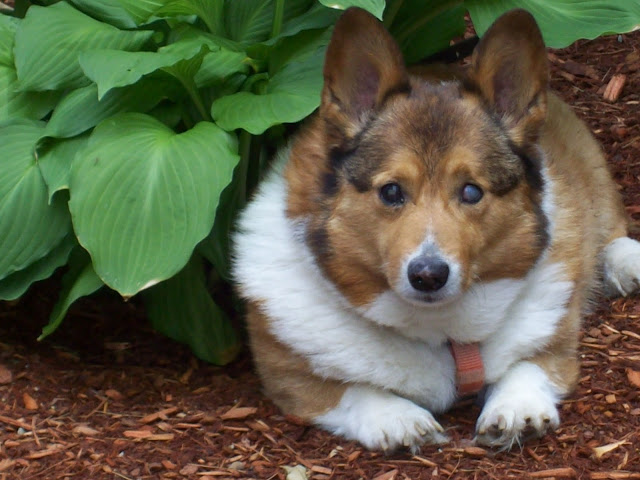 “However, he was healthy otherwise and in no time he seemed to adapt. We became his “seeing eye people”. He has found his way around the house and the “bumps” along the way don’t seem to bother him. He still loves to go for rides and he has even learned to play “Benny-ball” again. We use a long leash and he can find the ball by sound and smell and return it to us almost as well as before.” 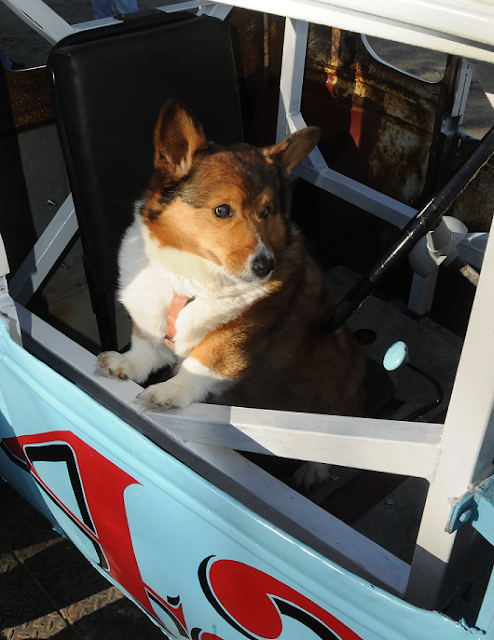 “We live in a small town and almost everyone knows Benny, the rescue dog who woofed his way into our hearts a decade ago.  He’s twelve now, slowing down a bit and spends time in own house with a small fence around it in Pete’s workshop.  We know someday he’ll be gone from us, and even though there is no replacing him, we will never be without a Corgi in our lives.” 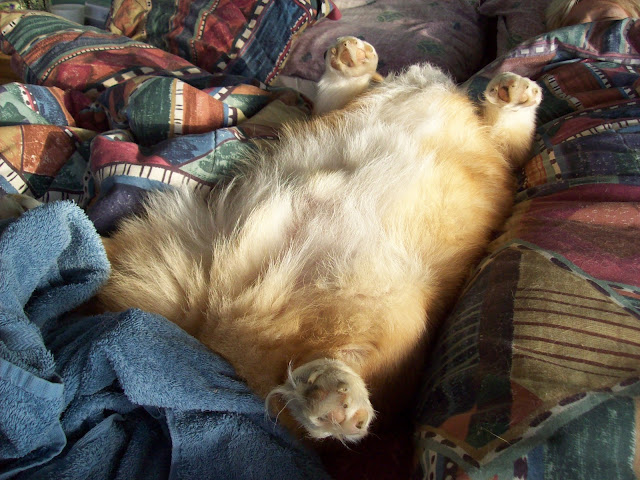 “Benny The Wonder Dog has enriched our lives far more than we could have ever imagined!”

Ten year old Frankie stakes out his favorite spot on the couch. Flooftastic.   Jasper still looks a lot like a puppy, but he ... END_OF_DOCUMENT_TOKEN_TO_BE_REPLACED