image: Lisa Lucania
Last September, Shannon O. established the Corgi Rescues of America facebook group as a way for people in a variety of facebook Corgi groups to centralize their networking and coordination of rescue efforts. Her vision was a single place on facebook where people could post Corgis in need of rescue, re-homing or transportation. 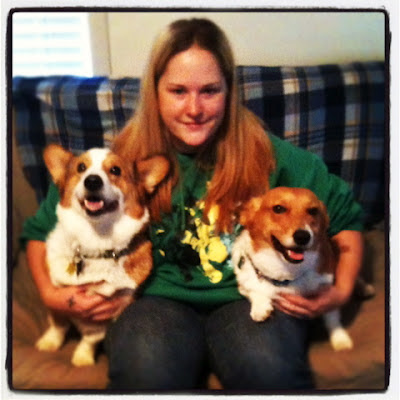 Shannon with her rescued boys Hiro and Jake!
Since then, the Corgi Rescues of America group has grown to include 850+ people and resulted in more than a few happy endings.
“I had no idea this would turn out the way it has” muses Shannon. “We started out with members very close to the on-line Corgi community but grew so fast; within a month we had 200 members, and in under a year we’ve reached nearly 900! New Corgis are posted to the page daily, and we act as quickly as we can to get them out of shelters or saved from craigslist postings and placed into rescues, foster homes or safe, forever homes.”
“I don’t know how many Corgis have been saved from euthanasia by our members or how many have found loving families after being posted in our group, but on average three to five are saved every week nationwide. People often ask me if there are really that many Corgis out there in need of rescuing, and my response is always “You have no idea!”
“The page could not have been so successful without the help of the moderators, Kayla C., Anitra F., Amy C. and Amy B. Special thanks goes out to Paige from CorgiPals, who has helped so many of the Corgis from the page get the medical treatment they need. All of our members are very special people with huge hearts full of love for this breed, people who want the best for these dogs and believe they deserve nothing less for the rest of their lives. The Corgi Rescues of America (CRofA) page could not be successful without them; they have my wholehearted thanks for everything they do to get these Corgis out of bad situations and into great new lives!”
Tavia Meares, President and Founder of Middle Tennessee Corgi Rescue, writes: “Since CRofA began, Middle Tennessee Corgi Rescue (MTCR) has gone from rescuing one or two dogs a month, completely on our own, to close to 70 dogs in 2011-2012. We are more effective in saving Corgis because the group facilitates sharing of Corgis in need, allowing us access to a greater number of people and resources for funding, transport and foster.”

Tavia, husband Anthony and five of their seven Corgis!
“I have taken dogs from eastern North Carolina to southern California and New Mexico. MTCR rescued a Corgi in Texas about to be euthanized due to an injury, transported him to Tennessee, where he’s now healed and living in a happy home. None of this would be possible without CRofA; without them, many more Corgis would meet a different fate in shelters. This group has not only helped people find Corgis, but helped Corgis find a way out of awful situations and get to where they’re going. “
Following are a few of Corgi Rescue of America’s many success stories — enjoy!
*  *  *  *  *  *
Nate (Nation):  As told by Rebecca G. 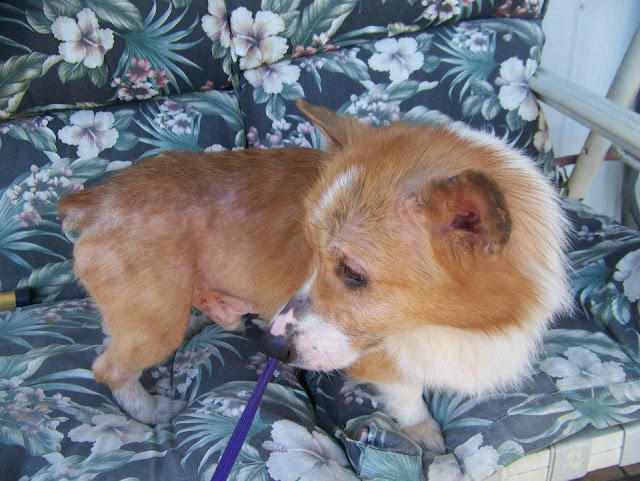 “The first time I saw a photo of Nate, he was still in a Georgia shelter and he looked so bad. Much of his fur was gone he was very thin and sick.  I fell in love with him right away.”
“Nate is a real sweetheart. After Mark S. pulled him from the shelter and got him vetted, Nate came to my Kentucky home as a foster. It was around this same time that little Otis (Alex M.’s beloved Corgi) passed away. I was thinking even then that Nate would be so good for Alex but I didn’t say anything, as it was just too soon for her.” 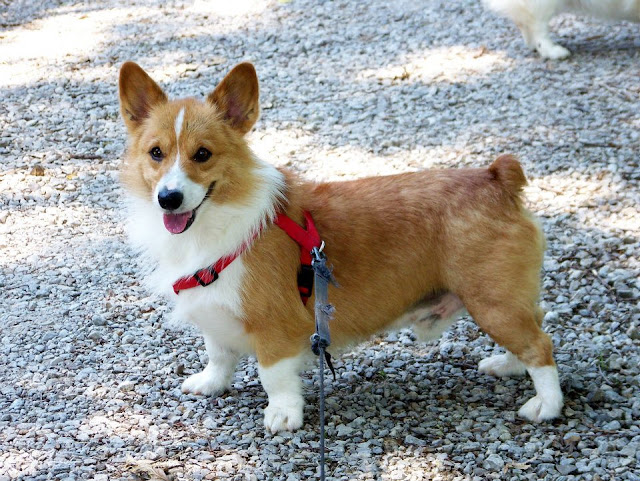 “Meanwhile, Nate was doing well: eating like a pig, growing his fur back and getting along great with my other Corgis. Then one day he got to play with Zoey; they became best buddies in no time. When I finally asked Alex if she’d like to adopt Nate, she happily said yes! Because she was thinking about getting two, I asked her if Zoey could come with Nate she said agreed. I’m so happy they’ll stay together, but they sure do get wild sometimes. Nate and Zoey won’t take Otis’s place, but Alex will love them for who they are. It’s going to be hard for me to let Nate go, but this is what you expect when you do rescue work. I’m so happy for these Corgis, knowing what an amazing life they’ll have with Alex!”
*  *  *  *  *  *
Precious:  As told by Cindi G. 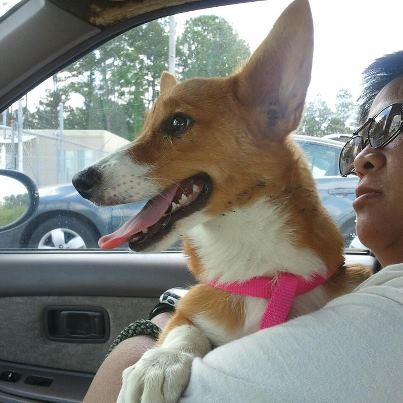 “My partner Patti received a text from a client about a Corgi in a high-kill shelter about an hour’s drive from us. I left a message right away about the dog on the Friends of the Jackson County Animal Shelter facebook page, and within minutes I heard back from the director Yvonne, who was thrilled with our interest. The young female Corgi was in really good shape, considering she was whelped in January by an Oklahoma puppy mill breeder.”
“While I was on the phone with Yvonne, Patti posted the Corgi’s picture and info on the CRofA page. Within minutes, I was chatting on-line with a half-dozen folks from CRofA, and within the hour, Tina W. of Indiana stepped up to say she wanted this Corgi. Patti and I promptly high-tailed it to pick up our new charge, and with the help of CorgiPals’ 501(3)c to reduce the pull fee, all of this happened in a space of only two hours. Yvonne from the Friends group was amazed!”
“We have four CRofA folks lined up to transport Precious for us. Her first stop is Chattanooga, where she’ll be fostered by Wendy J., and in June there is a regional Corgi Picnic where Wendy will deliver Precious to Tina!”
“There really is a Corgi Nation and all are truly dedicated to saving these wonderful dogs. It takes everyone — it takes a village — to save them. We’re so thrilled to be a part of it.”
*  *  *  *  *  *

Tanner (Montana) was adopted by Caryl B. after his post on the CRofA group. 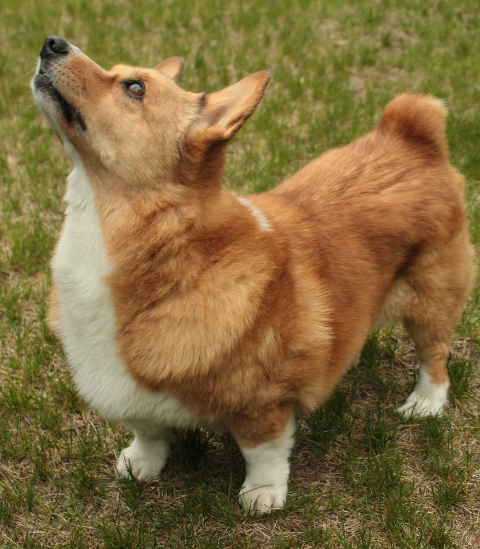 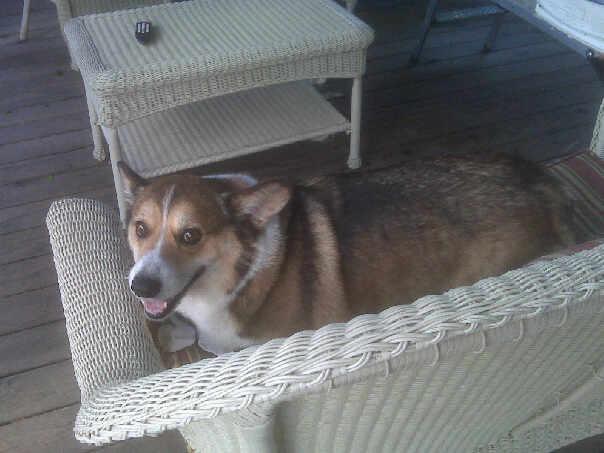 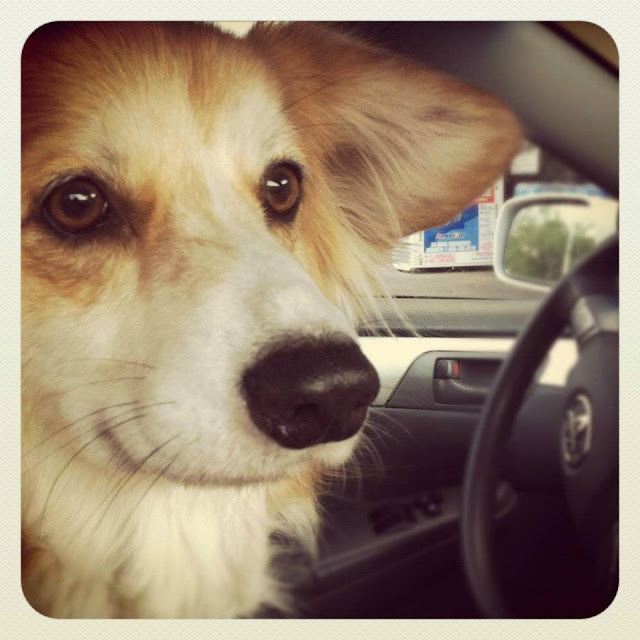 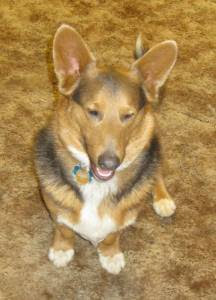 Lego was being re-homed because he liked to kill chickens.  With the help of Lynn N., Patricia B. rescued him and gave him a new home on Mother’s Day! 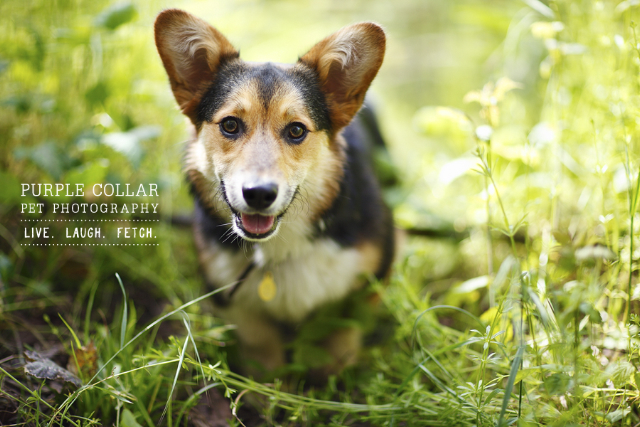 Smilin’ Kirby found a happy home with Melissa L. after she saw his post on the CRofA page!
Image by Anthony Helton of Purple Collar Pet Photography.
*  *  *  *  *  * 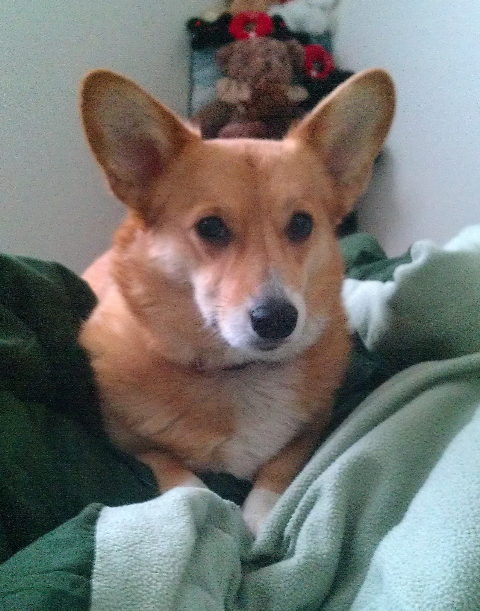 Sasha was facing euthanasia in a high-kill shelter in rural Alabama when she was posted to the CRofA page. Wendy J. of Chattanooga, Tennesse swooped in to pull her and credits Sasha’s second chance to the CRofA page!
*  *  *  *  *  *
Chuck:  As told by Anitra F. 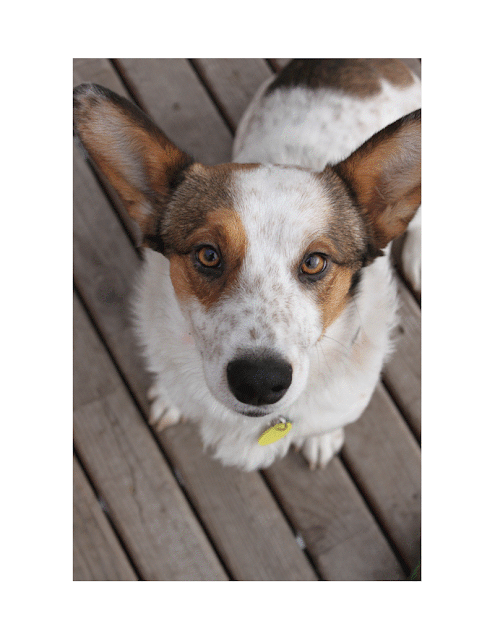 “I first saw Chuck posted on Corgi Rescues of America in October of 2011. The post was from Whitney H., who would end up being not only a Corgi rescue advocate and valued volunteer for Secondhand Hounds — the rescue I work for in Minnesota — but someone I now consider a friend. Whitney will help any dog in need, not just the short ones we all know and love!” 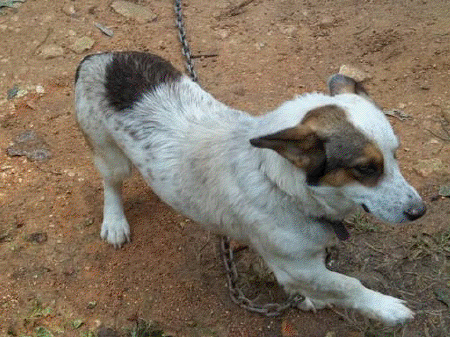 “Whitney found Chuck’s picture (above) and “for free” listing on ebay classifieds and posted it to the CRofA page. When I contacted her about Chuck, Whitney got in touch with the “seller” and made arrangements to meet the dog. Upon arrival she found three dogs there who needed out: Chuck; a terrier mix eventually referred to as Monk; and an older Border Collie mix. She couldn’t leave them in the conditions she found them, and went home with all three!” 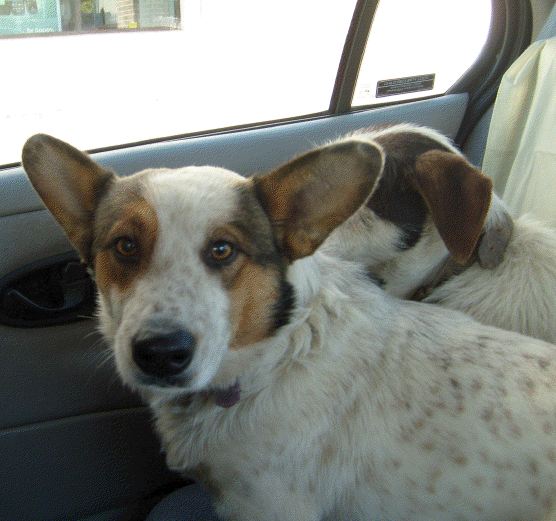 “When I had agreed to take Chuck into our program, I had no intention of fostering him. My Corgi Baxter Valentine had been diagnosed with prostate cancer just two months earlier. He was undergoing chemo and radiation therapy, and as a result had a very low white blood cell count. Doctor’s orders — no shelter dog germs for him. His body wouldn’t be able to fight off even the simplest case of kennel cough. It wasn’t worth the risk.” 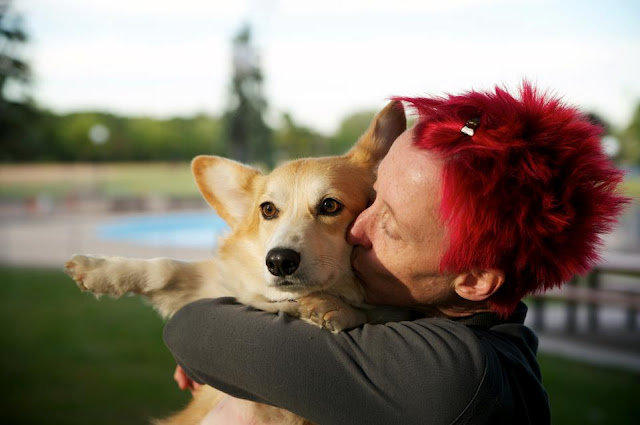 Anitra and Baxter: Sarah Beth Photography
“As fate would have it, my dear Baxter passed away on November 19th, 2011, at just 4 and-a-half years old. Thus was born the notion of Baxter’s Rescue Brigade. Baxter wasn’t a rescue dog, but he lived the life every dog deserves to live, and he would have a big grin on his face if he only knew.”
“On November 30th, 2011, we brought back 51 dogs from Missouri and Kansas to Minnesota. Chuck was one of them, and since I could now foster again, I figured he would be the one! Little did I know that when I walked through the doors of Joplin Humane Society and he was the first dog I saw that it would be love at first sight. Chuck was mine : )” 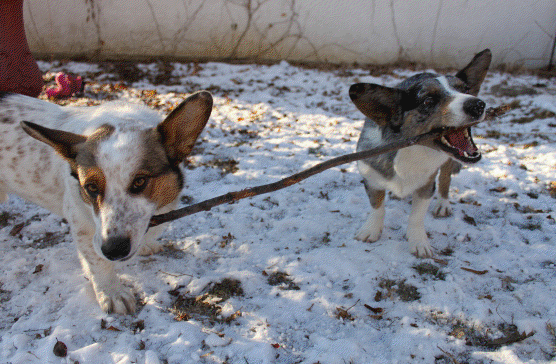 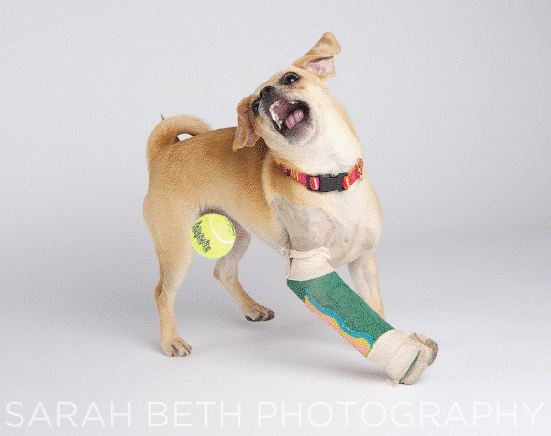 “I started fostering River almost three months ago. She’s been healing from surgery for the broken leg she had when she was left at the shelter. Whitney didn’t tell me ’til months after she rescued Chuck that he had come from a Chihuahua puppy mill. He has an affinity for his little River, so we just had to let her stay.”

“This story would not be complete without also thanking Pamela J.K., who acted as a temporary foster for Chuck during his tenure with the Joplin Humane Society, and Sarah P., my two-legged co-pilot for the very first Baxter’s Rescue Brigade.”

*  *  *  *  *  *
THUMBS UP for founder SHANNON O., everybody involved in CRofA efforts, and all the DOGS who demonstrate so much inspiring COURAGE and LOVE in the face of cruelty and neglect.
Keep the faith and Corgi On!
Laurie

Ten year old Frankie stakes out his favorite spot on the couch. Flooftastic.   Jasper still looks a lot like a puppy, but he ... END_OF_DOCUMENT_TOKEN_TO_BE_REPLACED