Downtown Portland went to the dogs on May 12th for the Doggie Dash to raise funds for the Oregon Humane Society. Cars were banished as dogs and their people took to the streets, including the members of Team Low Rider.
Daily Corgi reader Jennifer R., who’s done the Dash for the past two years, had the bright idea of forming a Corgi Team for her third year. “With my three, I almost form a team myself” she laughs. “I posted the event on our meetup page and we had a grand turnout for Team Low Rider. At least 13 of our members and their respective 20+ Corgis all registered and walked the Doggie Dash this year, many with other friends, families or co-workers. We ran into many other Corgi owners who hadn’t seen our event posting and were “Dashing” too.” (Ed. note:  the Portland, Oregon area seems to be a hot spot for Corgi Culture.  Must put a visit on my bucket list!) 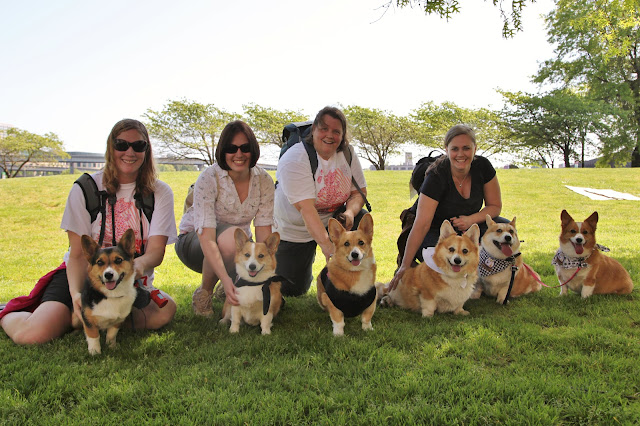 “Our core group of four owners and six Corgis walked strong as a team. We all met through the Portland Corgi Meetup Group and have become friends through the meetups.” The Portland Corgi Low Riders (Corgis first of course) are pictured above, from left: Wallace, Booker, Minnie, Bear, Rambo and Lit’l Sassy. Their handlers — aka human pets, aka Food and Love Providers — left to right are Jacci, Kelsey, Belinda and Jennifer.”
“Collectively we raised $460 for the Oregon Humane Society to help animals in need. The Doggie Dash is one of Portland’s favorite and biggest fundraisers for pets, open to everyone with or without their dog. Doggie Dash runners and walkers depart in several “waves” from the starting line on Naito Parkway. They have two different route options a 2 1/2 mile around the water and a shorter one mile loop around the park. There was live music, food, contests for canines and people, vendor booths and doggie demonstrations throughout the day.” 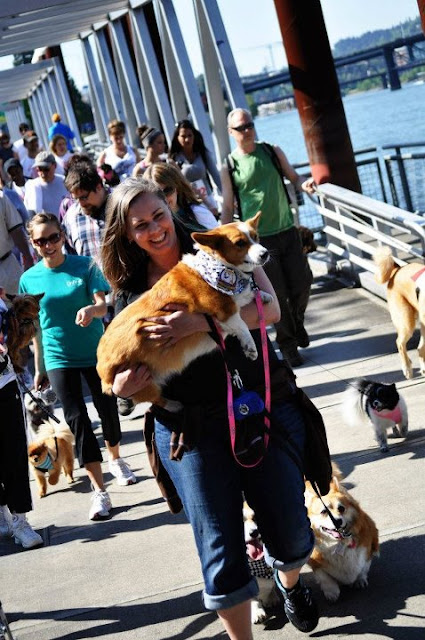 “This photo captures the moment when Lit’l Miss Sassy refused to walk her fancy pants on metal.  Because the route included a floating bridge, it was “pick me up or a no go” for her. With Team Corgi there is NO CORGI left behind, so up she went!” There are lots of photos at the Portland Corgi Meetup Group’s fun Doggie Dash facebook album, and plenty more at the Oregon Humane Society’s site. 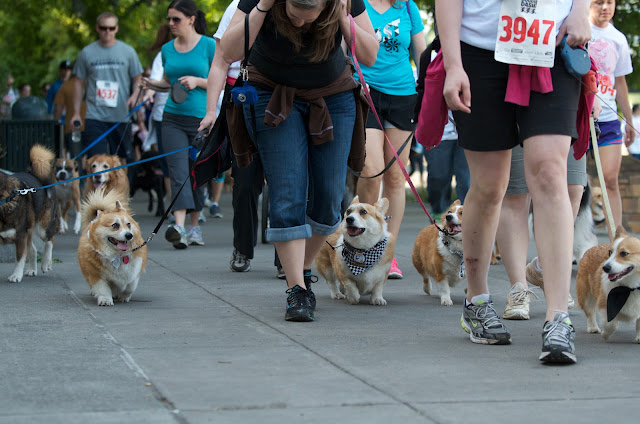 The Oregon Humane Society and was established in 1868, and is one of the oldest animal welfare organizations in the country. Because they are completely donor funded, they do many fundraising events every year, and the Doggie Dash is one of the largest.
According to their web site, “the OHS adopted 11,521 animals in 2011, setting new records for the percentage of animals saved and the number of cats adopted. OHS’s adoption rate is consistently 3-4 times above the national average. Pets stay available for adoption as long as necessary (sometimes six months or more), and animals are never euthanized for space reasons.”
Sounds like a pretty special place to me! Way to go, Portland Corgi Meetup Group pets and their people!  Doing good while having fun — does it get any better than that?!

Ten year old Frankie stakes out his favorite spot on the couch. Flooftastic.   Jasper still looks a lot like a puppy, but he ... END_OF_DOCUMENT_TOKEN_TO_BE_REPLACED