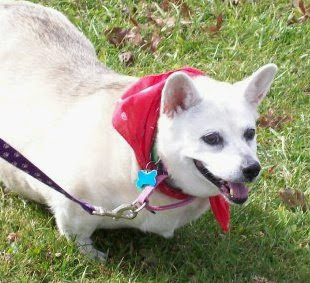 She couldn’t have known, on a mid-August evening in 2002, that her world was about to change. When she stepped out on her front porch close to midnight — for no particular reason — she saw something moving around at the end
of her driveway, sniffing at trash thrown from a passing car. Tina could tell it was a dog and called to it, expecting it to run but secretly hoping the little stranger would come to her instead. “When she came running right up to me” recounts Tina, “I
couldn’t believe it. It was like God had sent me my Corgi straight from
Heaven.”
Although at the time she owned a Pomeranian and a Border Collie, Tina wanted a Corgi and had for a while. She bugged her husband, who kept putting her off
because of the county’s two dogs per household rule. “I think he finally got tired of me asking when he said “Maybe for your birthday” says Tina. “That sort of shut me
up; even though I didn’t REALLY believe him. It gave me a date to shoot
for.”
As it turned out, Tina didn’t have to wait ’til her August 27th birthday. Smokey showed up on their anniversary date of August 16th. 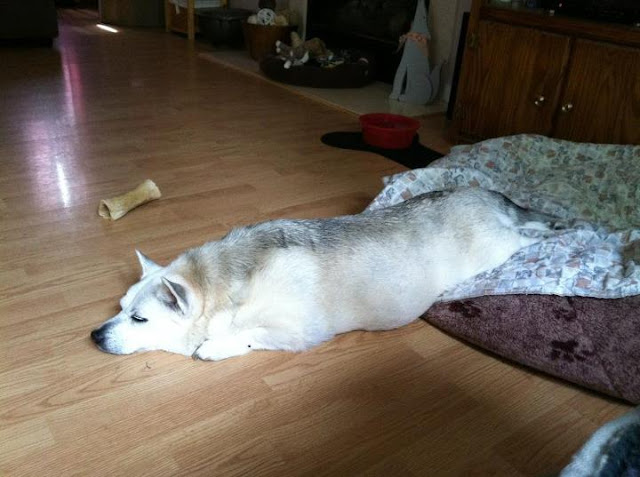 “The stray was so skinny, I could count every rib. Filthy but so
sweet. I brought her in the house and she got along with the other two
dogs. First of I all I had to feed the poor girl,
and boy did she eat. Then a bath; she was so dirty I didn’t even know
she was white! She definitely made herself at home, even sleeping on the
bed with us. The next morning I noticed that she was actively nursing
because her teats were full, so I set off trying to find where she lived
or at least hopefully her babies, even though I had a really bad feeling
about it. I knew she had starved for a while because everything I fed
her went right through her. We walked all over the neighborhood
and asked everyone if they knew her or had ever seen her, but no one had. I made flyers and posted them and kept her while waiting, but no one
ever called. All the while I was falling in love with her. I named her
“Smoke” after my favorite NASCAR driver Tony Stewart because that is his
nickname and she just kind of appeared like smoke.”
“She and I
developed such a bond so fast. It was like I needed her as much as she
needed me. I was at one of the lowest — perhaps the lowest ever — points of
my life, I had no job, I was depressed and had just come through treatment for that, and I was dealing the the fact
that I was never going to be able to have children. Really just an all
around bad time, but I had my dogs and my husband.” 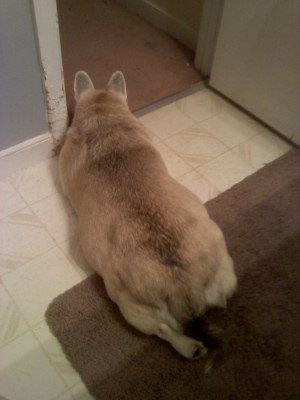 “My whole attitude changed. I loved my other dogs so much, but
Smoke was different. She was special, with these big, black eyes
that could look into my soul. She knew when I was feeling really down
and would just be there, just to lay with me. Funny too. She was
definitely part Basset Hound and had the funniest bark ever, and the
goofiest feet. My Moke was soooo long we nicknamed her “long dog”. I
remember the first time we took her to our vet he said “Well aren’t
you an interesting looking girl.” To me, she was the most beautiful
thing I had ever seen.”
“About six months after she found us, I had Smokey
on the leash in our front yard when a car pulled into our driveway. The strangers inside asked if we had found her. My heart sank. In that moment, I thought I would die. My husband told them that she showed up
six months earlier and we had put up fliers and done a search. Turns out they lived ONE street over!
I’d walked the whole neighborhood and no one had ever
seen this dog. Her former owners said they didn’t want her back and were happy
she had a home. I know in my heart they had dropped her off, and
God only knows what they did with those poor puppies.” 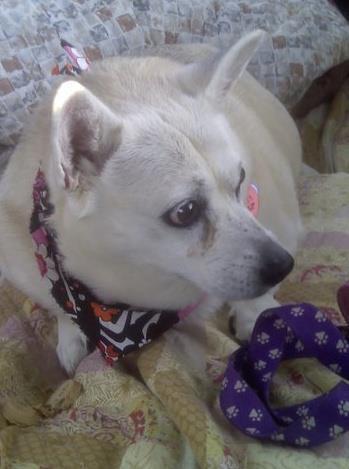 “Smoke was such a caretaker. In 2004 I had
to have a hysterectomy and was home sick from work for six weeks in a lot of pain. She was the velcro dog who never left my side. She would get on
the sofa and sleep between my legs. I’m
convinced she was like my guardian angel. My girl just always knew when I
needed her and she was there.”
“She began traveling with us, going along to Kentucky, North Carolina, Maryland. Her favorite was our annual trip to
the mountains for the Fall Martinsville NASCAR race.  We called it her
“wine tasting” trip. She really did love to go places with us, except to
the vet. Smokey knew when we were taking her too. She could tell just
by the turns the car made. Way too smart.”
“My love for her just grew by leaps and bounds when our Pomeranian Sable got sick. One evening Sable had a seizure and because it
was a holiday weekend we had to take her to the ER vet. I found out
she was in renal failure and really didn’t have very long. I was
devastated. I’d had Sable since way before I had even met my husband. That
night I made her up a bed next to mine so I could keep an eye on
her. When we were getting ready to turn the lights off, I noticed Smoke
was real restless on the bed so I helped her off thinking maybe she was
thirsty. When she got down, she went over and laid down next to
Sable and kept an eye on her all night. She slept next to her
every night like that until she died. That was the first night in three years she didn’t
sleep on the bed with us, and she didn’t sleep with us again
for three more months because she had to make sure Sable was OK.” 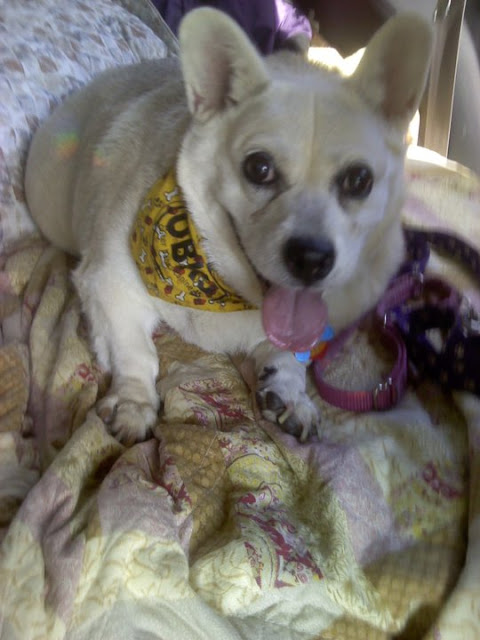 “That’s the
type of girl she was. That’s why I loved her so much. She did the same
with me when I was sick or sad, the same with my husband when he was
incapacitated with his hips. Moke Moke was a caretaker. When I say she was
sent to me from Heaven, I truly mean it.”
“A few years ago, the vet told me he was 99%
sure Smokey had Cushing’s Disease. She was old, I knew that, I just didn’t know how old. She wasn’t
acting sick, so we made the decision not to treat because as a nurse I
knew the treatment had it’s own risks and taking away the extra
steroids could cause her to be in pain. The doctor fully supported our
decision but I remained obsessed with everything about her. I cried
just thinking about losing her. Over the next couple of years I could
see her start to slowly decline, but when it came to food she was like a
pup! She would run between my husband and I begging — definitely hopped
up on the steroids!” 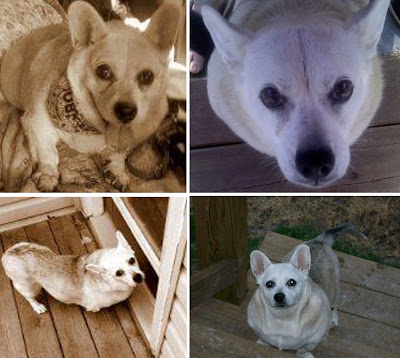 “When she stopped eating,
I knew. I am so thankful I didn’t have to make the decision to put
her down. Just like she always did, Smokey took care of me and made sure
I was OK. She waited until I fell asleep from exhaustion the night she
died and then slipped away. I honestly don’t think the Cushing’s
had anything to do with her passing, though in the back of my mind I feel sort
of guilty about not treating her.”
“That face of hers is burned into my memory. Those eyes
could look into my soul. I have never felt a love like that or a bond
so strong. I would give anything to hold her again.”

Ten year old Frankie stakes out his favorite spot on the couch. Flooftastic.   Jasper still looks a lot like a puppy, but he ... END_OF_DOCUMENT_TOKEN_TO_BE_REPLACED