My name is Caryl and I am honored that Daily Corgi founder Laurie asked me to write about a very special event that occurred on the Summer Solstice, June 20, 2012.

Many of us in the Corgi Nation followed Amy D.’s beloved Llyr’s journey with DM (DegenerativeMyelopathy) on Facebook. After a long battle, Llyr finally told Amy it was time to leave her. As her heart was breaking, Amy shared with us that Llyr would go to the Bridge on June 21, 2012 to join her beloved Gwennan Girl.

Our hearts broke with along Amy’s. 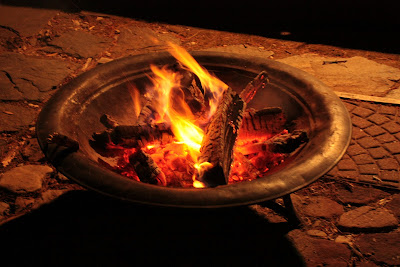 I needed a way to do something in response to this loss. Anything. And so it began: Llyr’s Fire, a remembrance and celebration of love. I have a fire every year on the Summer Solstice. But this year it would be different. I would dedicate my fire to Llyr on his last night with Amy.

On
Monday, June 18, 2012 I created a Facebook event called Llyr’s Fire and
invited everyone I could think of who might want to come. In turn,
they, invited others. The page became a place to post the names of any
beloved ones, four or two footed, that had passed. It was a place to
grieve, to remember, to celebrate. I thought I would get a few names. In
the two days the page was up I received over 400 names. Corgis, other
dogs, kitties, horses, people — so many names shared. I was honored to
be invited into so many people’s grief.

I would speak the name of each beloved one who went before, speak the name of the requestor, burn a sage leaf for each name, and ask them to welcome Llyr when he arrived. My husband would be there with my three Corgis, Hunter, Pippin, and Tanner to listen. For if one speaks a name and one is there to hear, we remember. 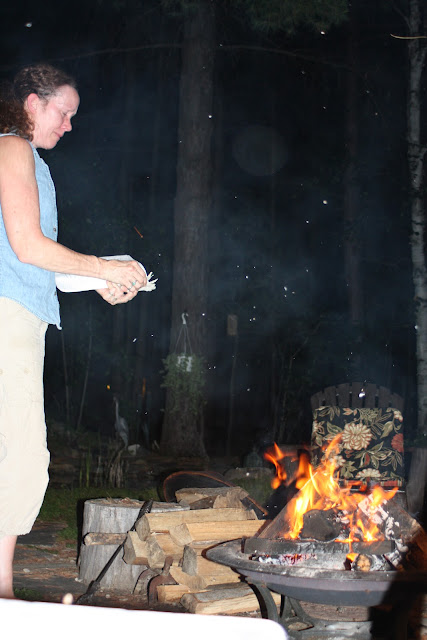 At 10:00pm EDT the fire was burning and I began to read. It was a beautiful starry summer night. Through tears I spoke each name. My husband and our Corgis listened. The heavens listened. All across the country and around the world people read names with me. Fires and candles were lit. For a brief time, we came together and became something larger; all because of a very special Corgi and his devoted mum. 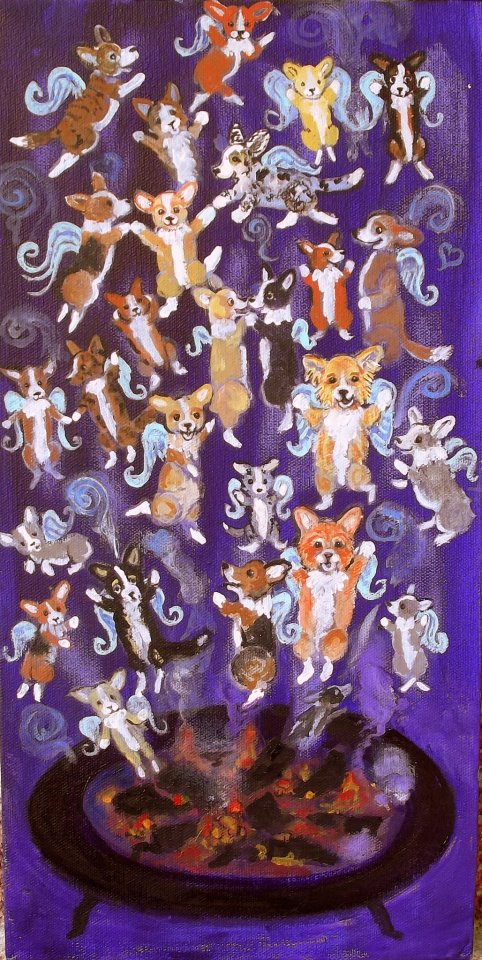 Llyr’s Fire, by Vanessa Keys
Because I wanted to somehow capture that night, I asked Vanessa Keys, a folk artist I knew via Facebook, to create a painting for me. What she painted — Llyr’s Fire — captured the collective spirit of that night.
I have donated a print of Llyr’s Fire to the current CorgiPals fundraising auction. Vanessa Keys will personalize this print of Llyr’s Fire for the high bidder by painting
in a furbaby. You can bid on the print by going to the CorgiPals
Facebook page auction photo album. CorgiPals founder Paige Davis does amazing work helping Corgis in need. Hers is a remarkable mission I would do anything to support. Please consider bidding on the print or one of the many other items available in this auction. Join with us in celebrating the memory of the departed beloved and the lives of those still with us, in need of our care.

Llyr’s Fire will be an annual event here. We’ve lost so many, we will lose many more. I continue to receive names and keep a list. Next year the Summer Solstice is 21 June 2013.

Once more I will speak the names and together, we will remember …

Ten year old Frankie stakes out his favorite spot on the couch. Flooftastic.   Jasper still looks a lot like a puppy, but he ... END_OF_DOCUMENT_TOKEN_TO_BE_REPLACED