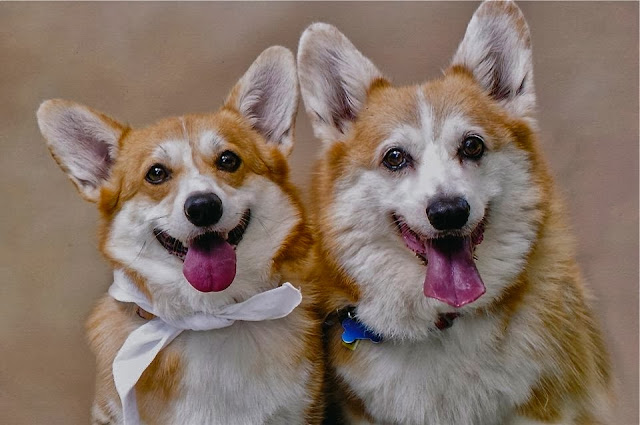 This is the story of Griffin and Pebbles Pembroke and the huge role that dogs, especially Corgis, have played in their hu-mom Cathy’s life.

When Cathy was 12, her family already had a Japanese Chin named PinPin (at that time they were called Japanese Spaniels), but her Dad Doug had decided one day that they were going to get a Corgi. “The next weekend” Cathy recalls, “we visited the breeder and found ourselves with eight puppies crawling all over us. From that day on, I was entranced by Corgis. A few weeks later we went and picked up Abbey, our own puppy. Her name was actually Abergavenny, after the town in Wales where my own Mom was born.” 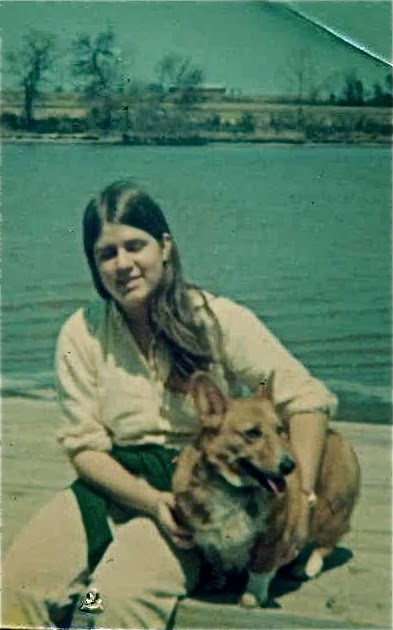 As a teenager with Abbey. 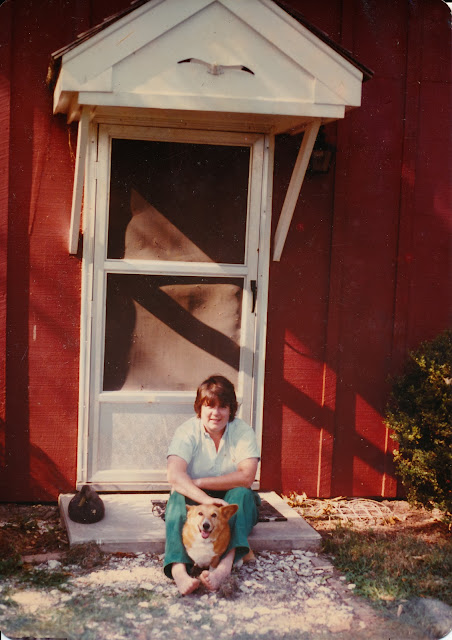 Abbey with Cathy the day before she left for Africa.

A few years later, driven by wanderlust and a humanitarian spirit after graduating from college, Cathy joined the Peace Corps and went to West Africa for two years as teacher/trainer. Sadly, Abbey died right before Cathy’s return to the US in 1985. But another Corgi was about to enter her life. “I had just come home from Africa and it was plain wrong for the house to have NO pets. About two weeks after my return home, my Mom and I went to pick up Dad at his office. He was on a phone call, so while we waited, we picked up different sections of the newspaper. In my section, there was a photo of a Corgi who was found wandering on the road. I silently showed my Mom the photo. My Dad put his caller on hold and told us ‘You may go LOOK at the dog, but you may NOT bring him home.’ So we went to see this Corgi and realized we couldn’t go home without him. We called my Dad, who relented, saying ‘Oh, just bring the damn dog home.’” 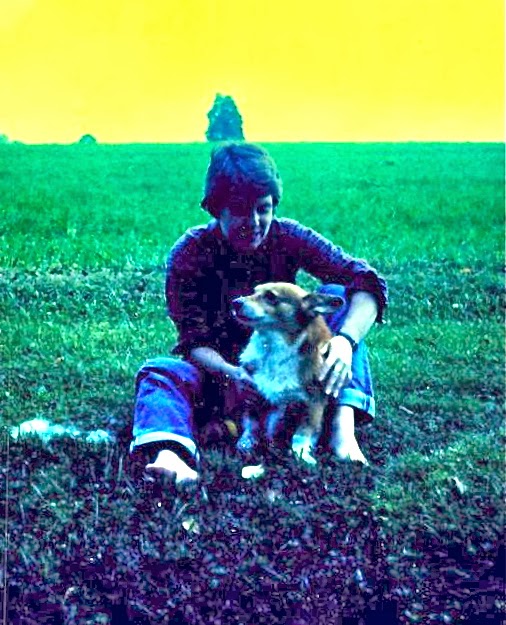 “We named him Corky. He and I became best buddies in those first weeks when I was home from Africa and trying to figure out what to do with my life. He was about nine or ten then, and he probably had DM (degenerative myelopathy) because he was losing the use of his hind legs. His earlier life caught up with him and he just didn’t have the will to survive. He died about a year after we found him, but he knew lots of love in that year.”

Fast forward a few years. Teacher Cathy has fallen in love with Steve the scientist. They share a love of nature, especially birdwatching, and married in August of 2001. At the time of their marriage they had Osa, Steve’s German Shepherd Dog.

Osa passed on 9/11 at the age of 15. Bereft at the loss of Osa, and knowing they wanted children at some point, Cathy says  “We thought getting two puppies at the same time would be a test of whether we could handle the care of baby creatures, before we had a baby human.” Steve and Cathy each chose a breed; he a Belgian Malinois, who joined them in October of 2001, and she a Pembroke Welsh Corgi. (Of course). 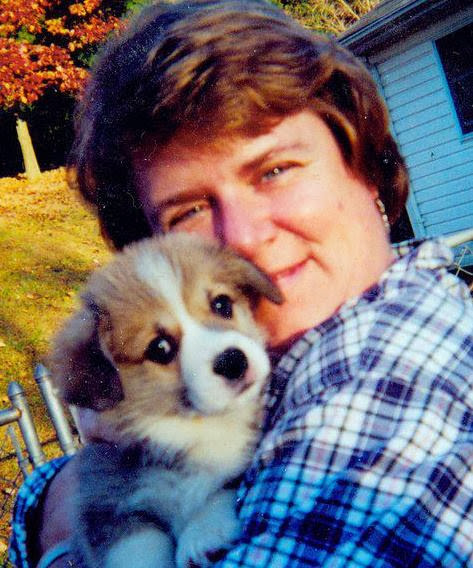 Zoe the Malinois met Griffin the Pembroke two months later. Griffin’s litter was born three days after 9/11/01 and were all given patriotic names. His official name is Abbelbo’s Sweet Freedom’s Song, from a verse of “My Country Tis of Thee.” 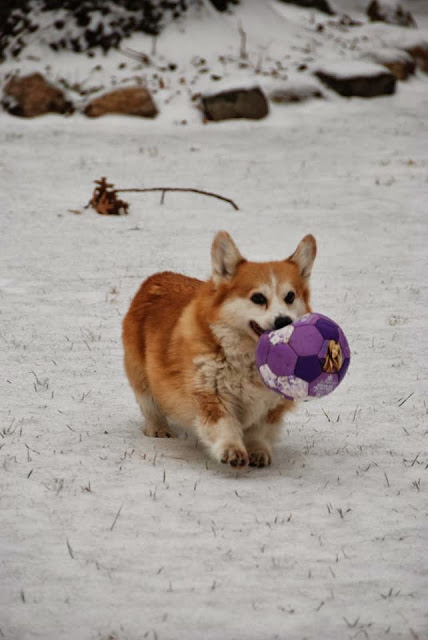 The two young dogs got along famously, and Griffin became hu-mom Cathy’s shadow. She was teaching children with dyslexia to read at at the Jemicy School, and Griffin came to work with her every day, where he would interrupt soccer practice and shove the ball with his shoulder or nose. 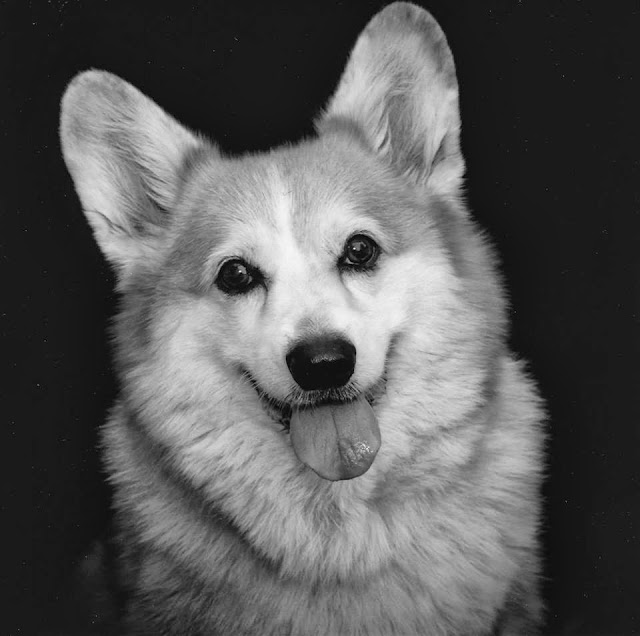 As Griffin grew up, he developed the thickest non-fluffy coat imaginable. “He’s about three tufts of fur short of being a fluffy'” laughs Cathy. “His dignified bearing, combined with his teddy bear appearance, makes him irresistible. Griffin doesn’t like to be held, but loves being petted and stroked. If you stop, he makes polite but insistent complaining noises.”

Soon after getting the puppies, Cathy and Steve initiated the process of adopting a baby from Russia. Beautiful baby girl Elena joined them in 2003, and they were so enchanted with Elena they adopted a second adorable Russian daughter, Nina, in 2005. 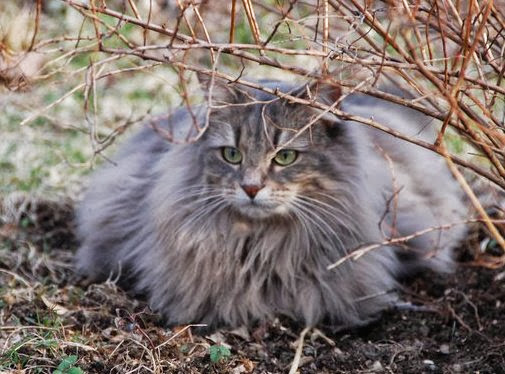 Meanwhile, Cathy knew she wanted a cat to complete the household. When a friend alerted her to a lovely longhaired cat named “Tula” needing adoption, she jumped into action. It was meant to be; both Elena and Nina are from Tula, Russia! 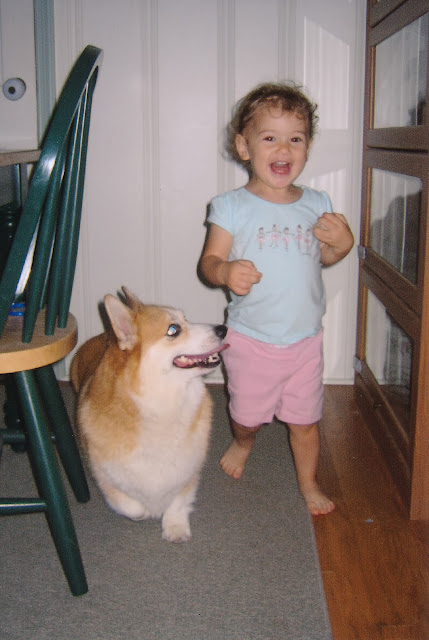 The girls spent their early childhoods with Tula, Griffin the little dog, and Zoe the big dog. Griffin was particularly happy when the family went on an extended visit to Alaska and took him and Zoe with them. The cooler weather was much more to his liking than the summers in Maryland! 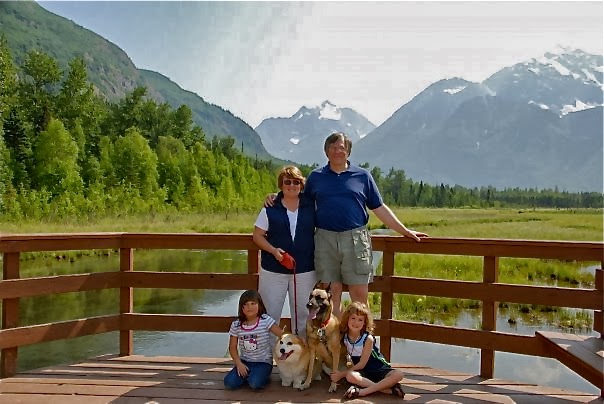 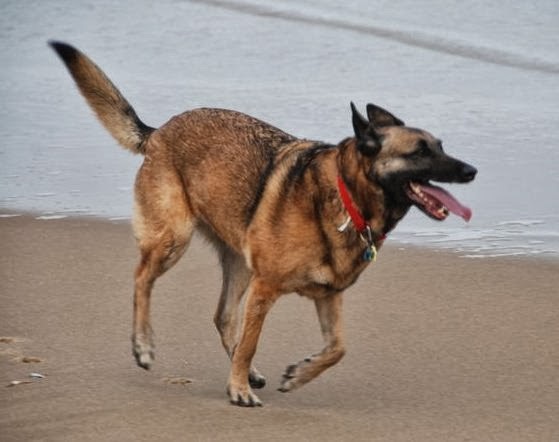 Zoe about a month before her passing.

The family lost their beloved Zoe to cancer in April of 2011, a few months shy of her 10th birthday. Cathy wanted another dog, this time around a second Corgi. Steve agreed. With two young children, they felt a puppy would be too much to handle, and their search for a young adult Corgi ended with Foxtale’s Irish Rose, born on St. Patrick’s Day of 2010.

She was to be a show dog but never lost her adolescent look, so at the age of 18 months, Irish Rose — otherwise known as Pebbles — joined the family. 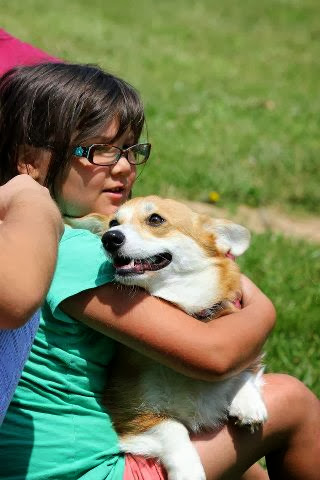 Pebbles loves to be held and cuddled, but also enjoys vigorous play sessions with male Corgis. She and Griffin have a cordial relationship. “Even though he’s twelve years old now” Cathy reports, “about every six days, he’ll walk up to Pebbles with his chest held high, and she turns tail — Corgi pun intended — and runs outside. Then she’ll run around the maple tree out back, giving Griffin a chest bump on each circuit. I counted 17 times around the tree the other day.” 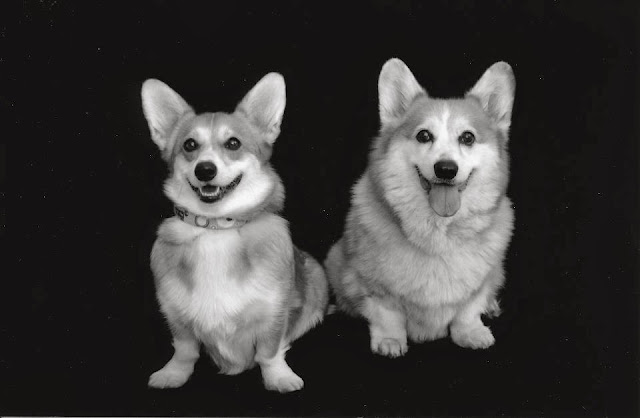 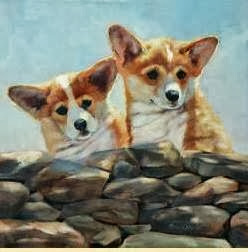 On Pebbles’ second birthday, March 17, 2012, Cathy and family hosted a party of neighbors as well as Facebook friends with Corgis. It was a rousing success, with all 13 Corgis getting along beautifully. 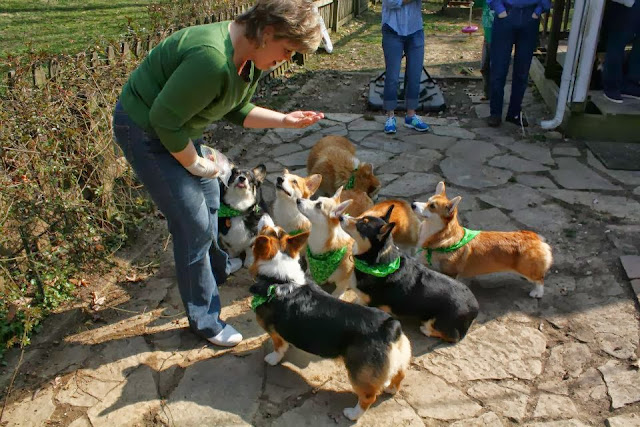 Thus began the tradition of periodic regional Corgi meet-ups, with much frapping and the now-cherished ritual dispensing of the treats. 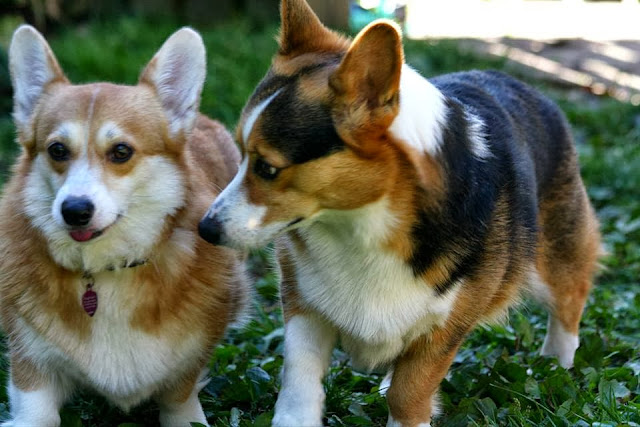 At that gathering, Pebbles met her true love. She took one look at Denise R.’s handsome tri-color Percy and leapt over another Corgi to get to him. They chased each other and wrestled joyously. 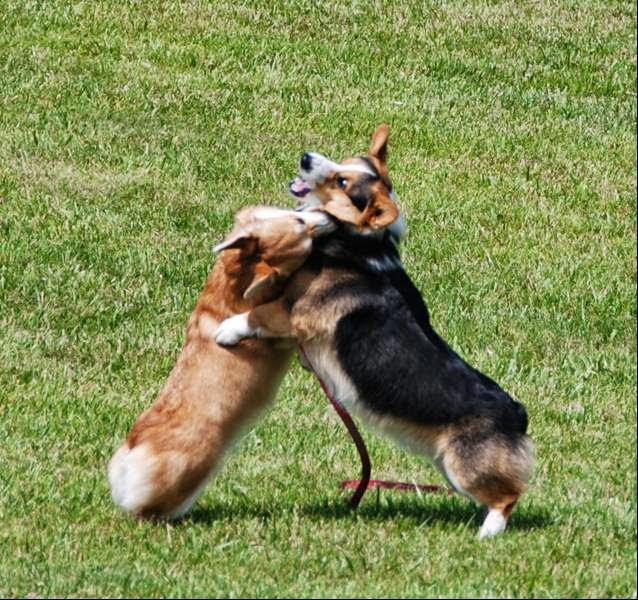 Last November, Cathy and friend Susan M. and their four Corgis piled into a minivan for an epic 2000-plus mile round trip to the Florida Corgi Picnic. 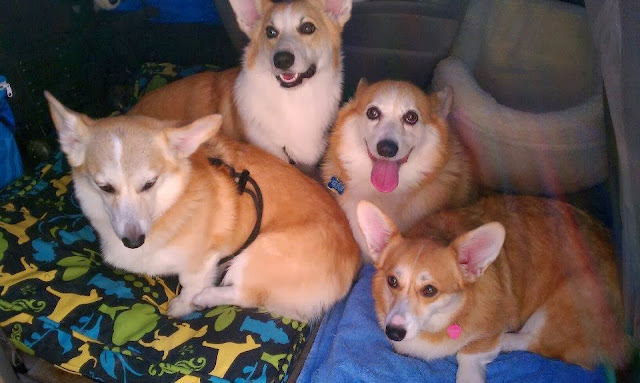 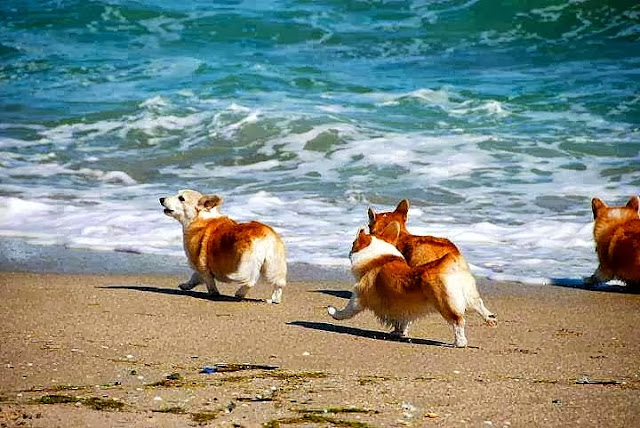 A rollicking beach romp the morning after the Picnic was a trip highlight!

Late last year, hu-dad Steve longed to have another large herding dog. Research led the family to a former Corgi breeder, now breeding a working line of German Shepherds. When they added puppy Willow to their number, she and Pebbles became instant playmates. Willow’s adorable lop ear soon righted itself and she has grown into a beautiful adolescent. 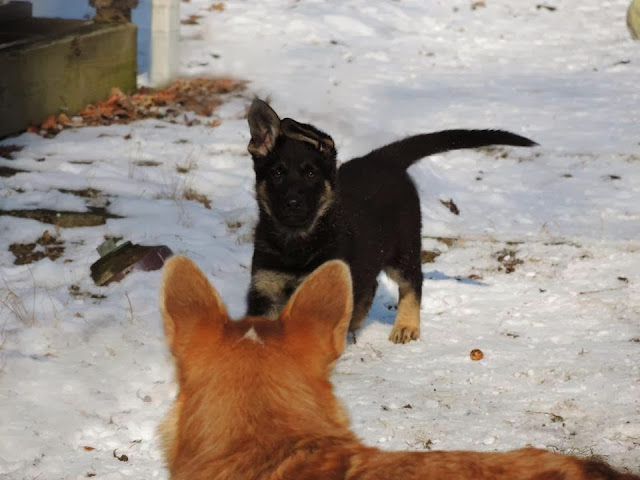 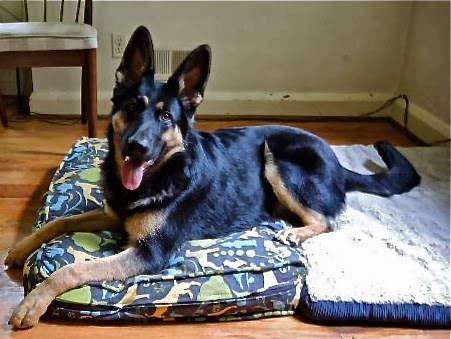 Lovely Willow
Several times a year the family goes on birding expeditions to Bombay Hook National Wildlife Refuge in Delaware, and the well-behaved dogs come, too. 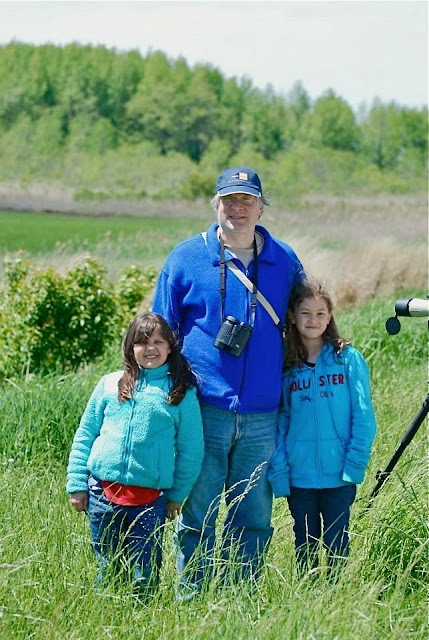 Steve and the girls at Bombay Hook. 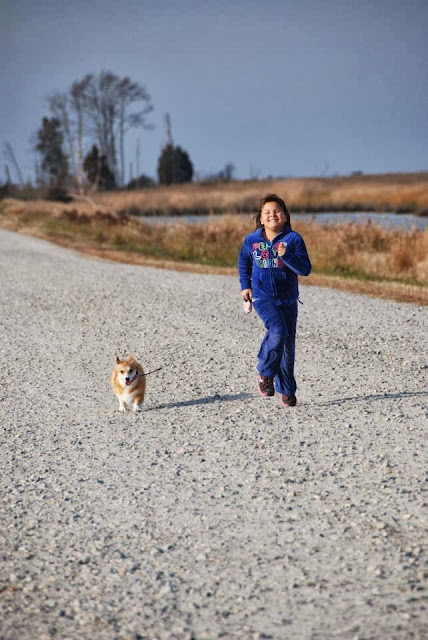 Pebbles and Nina at Bombay Hook. 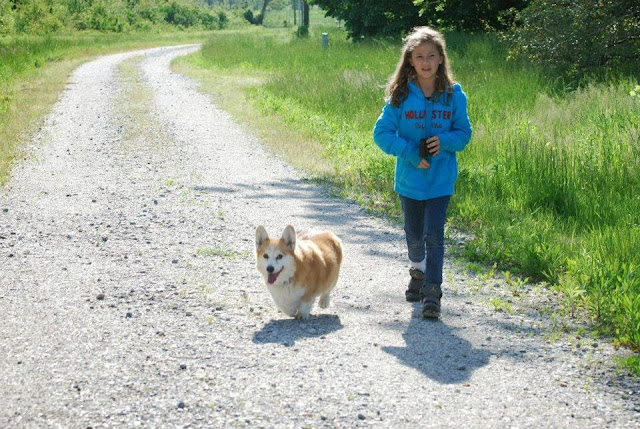 Griffin and Elena at Bombay Hook. 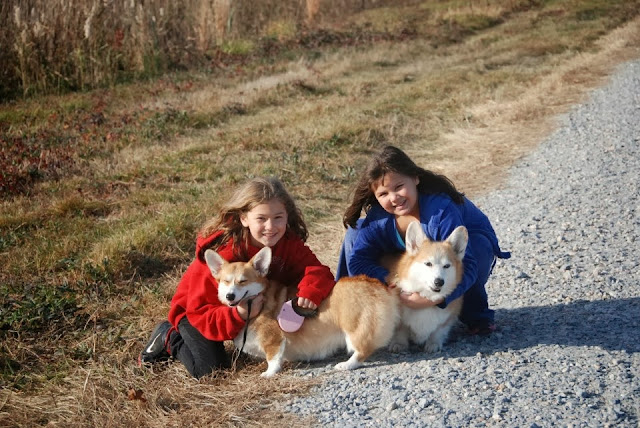 The girls and the Corgis at Bombay Hook.

Griffin turned twelve recently. In spite of the challenges of arthritis, kidney disease, and dental surgery, he remains a cheerful, loving boy and the apple of his hu-mom’s eye. He is the elder statesman of his active family, and he and the plucky Pebbles still turn heads wherever they go. 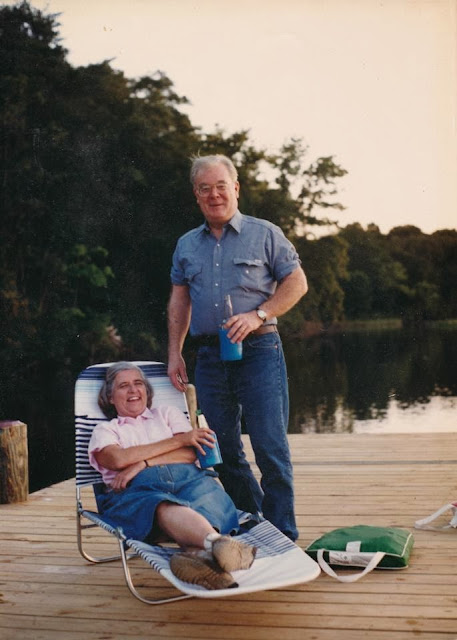 This post is affectionately dedicated to Cathy’s Mom, Jean MacFarlane, who is recovering from abdominal surgery, and to the memory of Cathy’s Dad, Doug MacFarlane, who died twenty-two years ago on this day, October 21, 1991. Without him, Cathy might never have fallen in love with Corgis.

Hearty thanks to guest author Susan Mooring for a terrific post on a special family!

Ten year old Frankie stakes out his favorite spot on the couch. Flooftastic.   Jasper still looks a lot like a puppy, but he ... END_OF_DOCUMENT_TOKEN_TO_BE_REPLACED