Check out Megan’s pre-competition and mid-competition posts for bio info and more information on this talented, fun-loving bunch of Corgis and their people. 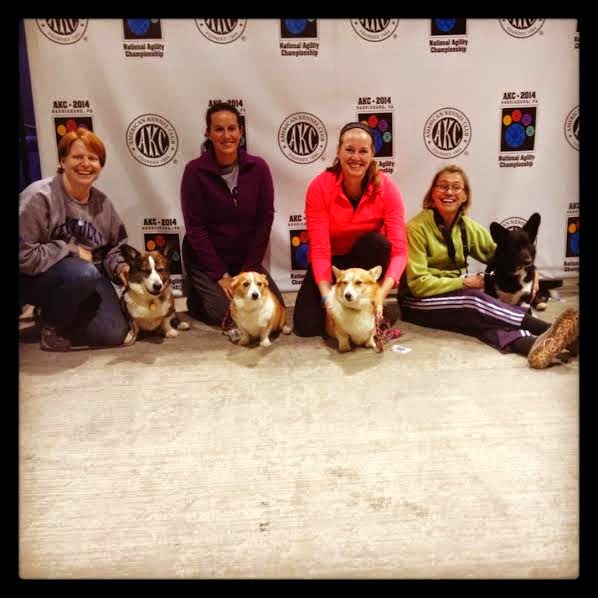 Round 3 of the competition dawned rainy and gross in Harrisburg. We had high hopes for #TeamDailyCorgi to finish strong in the Hybrid in the morning, with trips to the Challengers and Finals Rounds on the line. 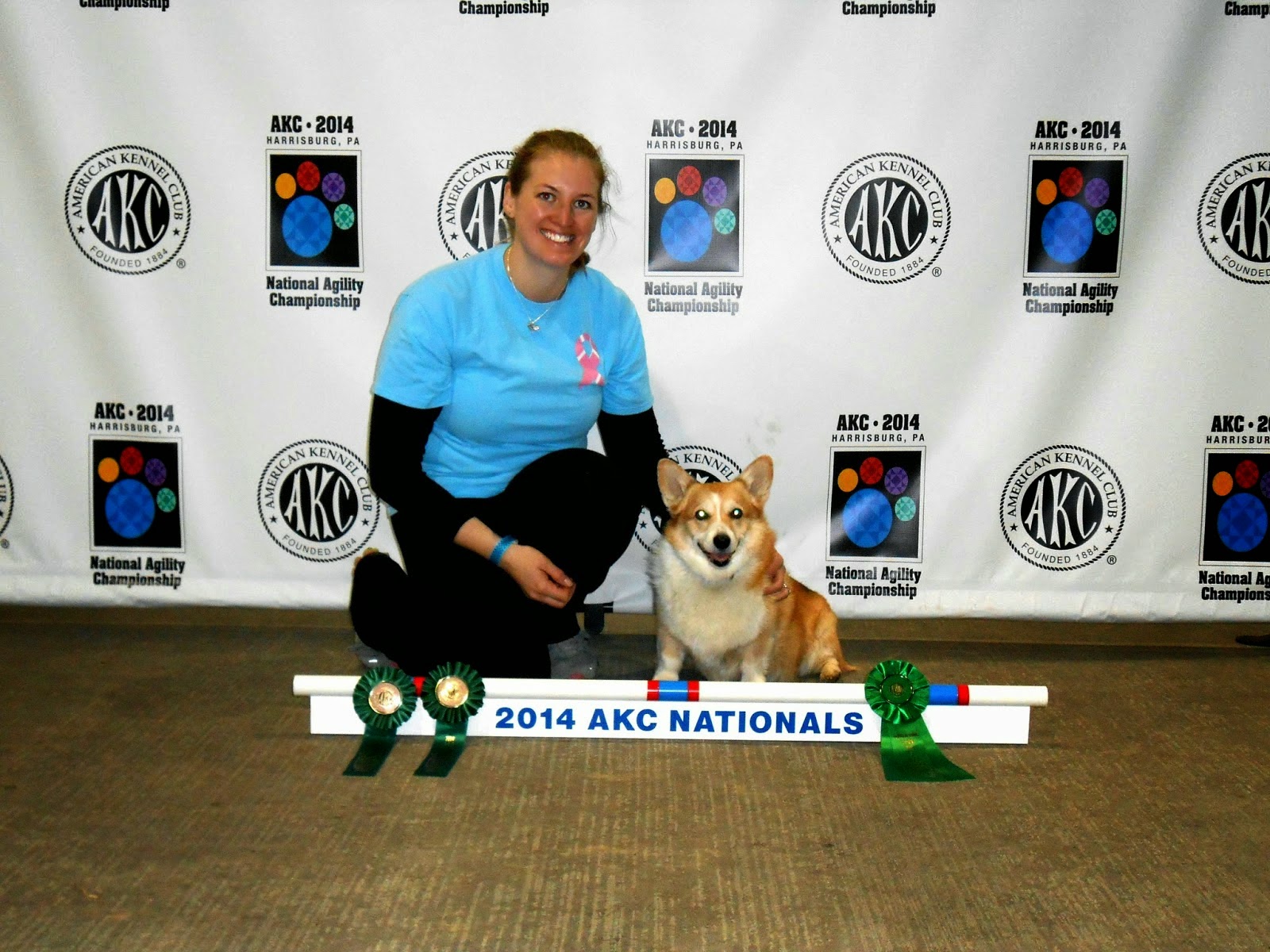 Megan and Dally with their “Clean Run” green ribbons.

Unfortunately, Dally and I came up short. Just like the past few years, we couldn’t capitalize in Hybrid. Instead, something caught her eye and spooked her, causing her to refuse the weaves and then want to end the run early. Our Nationals experience was over.

Videos of our best runs are posted on my blog Agility On Stumps.

We stayed to watch the other two #TeamDailyCorgi members in the 4-inch division. Maddie had a smoking run; Becky was pushing her to earn a placement, and she did exactly that! A clean, fast run earned her second place and a trip to the Challengers Round. Merinda and Porter had one weave pole problem, but her placement from Standard and fast times got her a spot in Challengers, too.

Jimmy and Taryn battled in the 12-inch division, hoping for a clean round, but a knocked bar going over the double jump ended their first Nationals run. Writes Taryn: “While Jimmy and I didn’t have success earning any of the coveted “Clean Run” green ribbons, our real victory was in simply stepping to the line together so soon after my knee injury. We still enjoyed the thrill of competition and the excitement of such a big event. It was incredibly fun meeting my on-line Corgi friends and cheering each other on. What can be better than a long weekend playing with my dog and hanging with like minded friends?”

The Hybrid run was Jimmy’s best of the week:

Check out Taryn’s spirited summing up of her memorable visit to Nationals with Jimmy, at her blog A Tail of Two Cardis.

Challengers came and so did the nerves. “I was holding my breath for both Porter and Maddie’s runs”, continues Megan. “I knew whoever won the round would do great in the Finals. Porter took the lead and there was just one more run, from Maddie. Porter and Maddie compete against each other a lot at local trials, so it was nothing new.”

Unfortunately for Becky, Maddie took a turn just a little too wide, which meant a less than a second difference between her and Porter. In spite of this, Becky was very pleased with Maddie’s performance. “My goal going into NAC was to come home with “a few” clean runs” she recalls. “Much to my surprise we can home with 4 clean runs, a first place in T2B, 5th place in JWW, an unfortunate dropped bar in Standard, a second place in Hybrid, and a spot in the Challengers Round! Maddie ran clean and as fast as she could in the difficult Challengers round, but was beat by fellow Corgi Porter for a spot in finals.”

“The 2014 AKC National Agility Championship far exceeded my expectations in every way. This was our first time competing at the NAC, and I honestly had no idea what to expect. Competing at this level in agility is very exciting. The rush and intensity of the competition is addicting. I can’t wait to be there again. Every handler, volunteer, judge, field rep, and vendor were supportive and enthusiastic about the competition. The camaraderie between competitors, specifically the other Corgi handlers/owners, was amazing. I came home with many new agility friends. I am prouder than ever proud to be part of this sport. 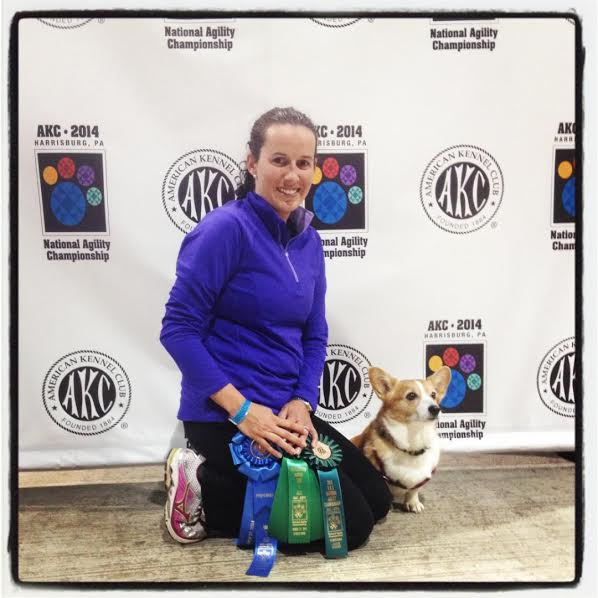 All in all, Maddie ran great the entire week. I learned a lot and have many new skills to work on. I was pleased with my handling and her performance, and have never been more proud of my little rescue Corgi. Thanks Maddie!”

Meanwhile, fierce competitors Roger and Keebler laid it out on the line. After knocking a bar on Saturday, he knew they needed a placement to get into the Challengers Round. With a flash of her signature tail, Keebler finished 4th. Her Hybrid run was awesome. So fast! Roger was in good form, but unfortunately Keebler was way too hyped to hit her down contact on the dogwalk. 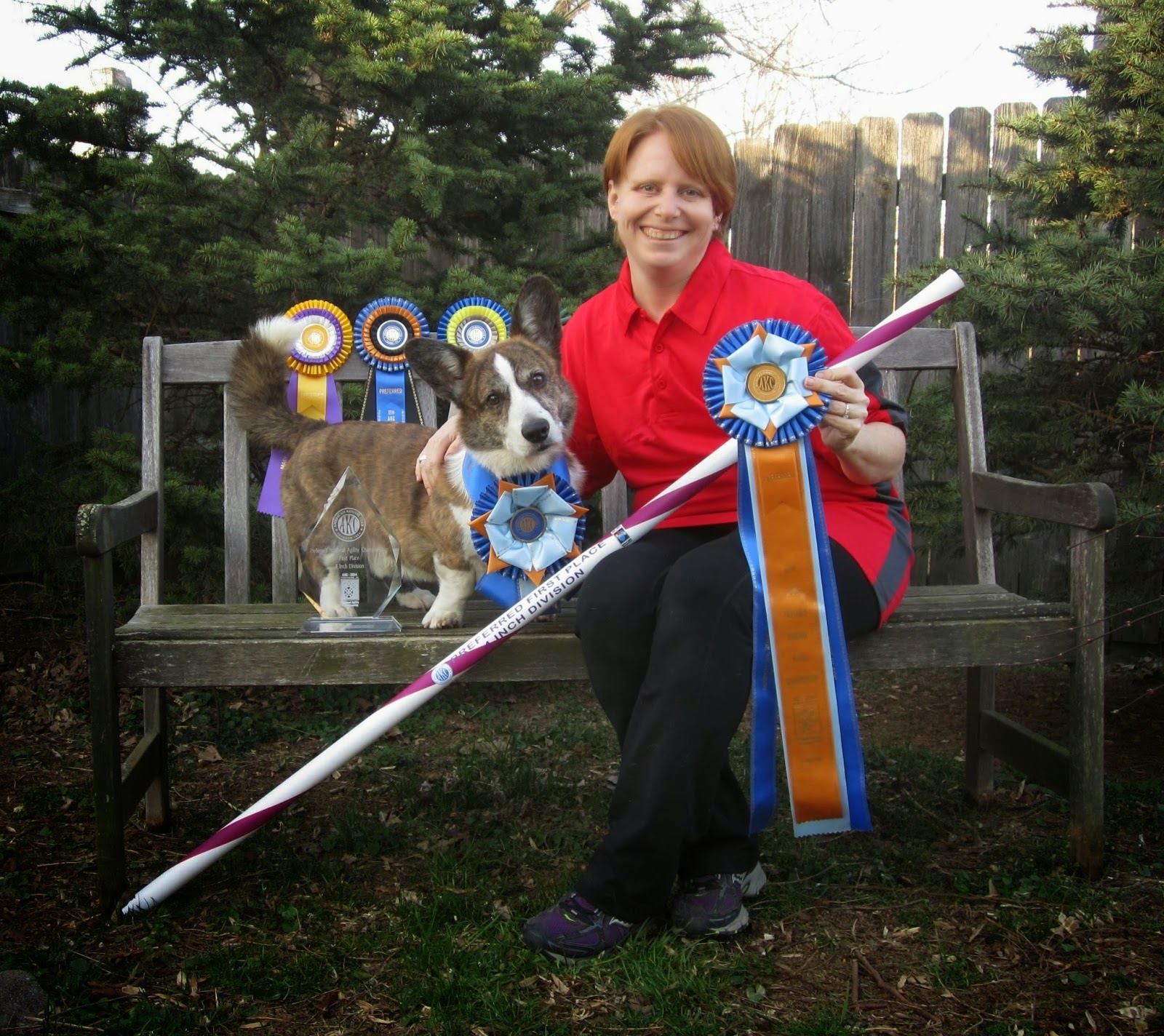 Merinda and Porter: We are the CHAMPIONS!

And finally, Porter. If you haven’t heard the news yet, Merinda and her Cardigan Welsh Corgi Porter aced the Finals course and came out on top, emerging as National Champions in the 4-inch division!  Porter will have his own post on The Daily Corgi soon. He’s earned the big ribbon and the bragging rights, too.

Bottom line? Corgis totally rocked this year’s Nationals! So proud of all the low-rider teams!

Ten year old Frankie stakes out his favorite spot on the couch. Flooftastic.   Jasper still looks a lot like a puppy, but he ... END_OF_DOCUMENT_TOKEN_TO_BE_REPLACED