Proud Mom to Caeden, Peggy S. tells his story in her own words.

“Caeden came to us on January 17, 2010. My husband Peter and I drove up to Coxsackie, New York to meet Kathy Moore (from Corgi Rescue of Eastern New York) and Caeden’s foster mother, Barbara. 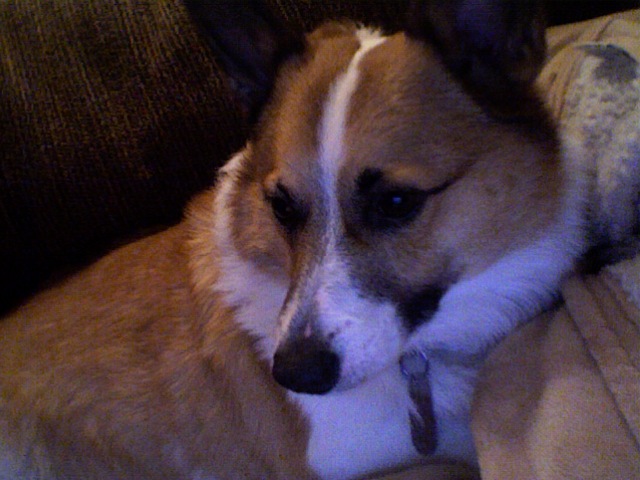 The minute we saw him we fell in love and he was ours. I had been waiting five years to get a Corgi, and when we got Caeden I realized that I had been waiting for him. He is the smartest and most loyal dog I’ve ever had — and I’ve had three wonderful dogs before I got him.

Caeden lives with us in an old Victorian rectory in a small village in Orange County, New York. I am the Rector of the church, although for Caeden, I’m just his Mom. He is a real “people person” and loves to come to Coffee Hour after the 10:00 service on Sundays. For him it’s more like “crumb hour” as he scours the floor for any leftovers he can find.

The children in the parish love him and he loves to see them. He comes with me to Bible Study on Wednesday mornings and loves to snuggle up on the comfy chairs beside someone or crunch on a chewy rawhide bone in the middle of everything. He is crate trained, and on Sunday mornings when I put on my clerical collar and get ready to leave for church, he goes right in his crate, even though Peter is still home and planning to walk him before he comes over to church. 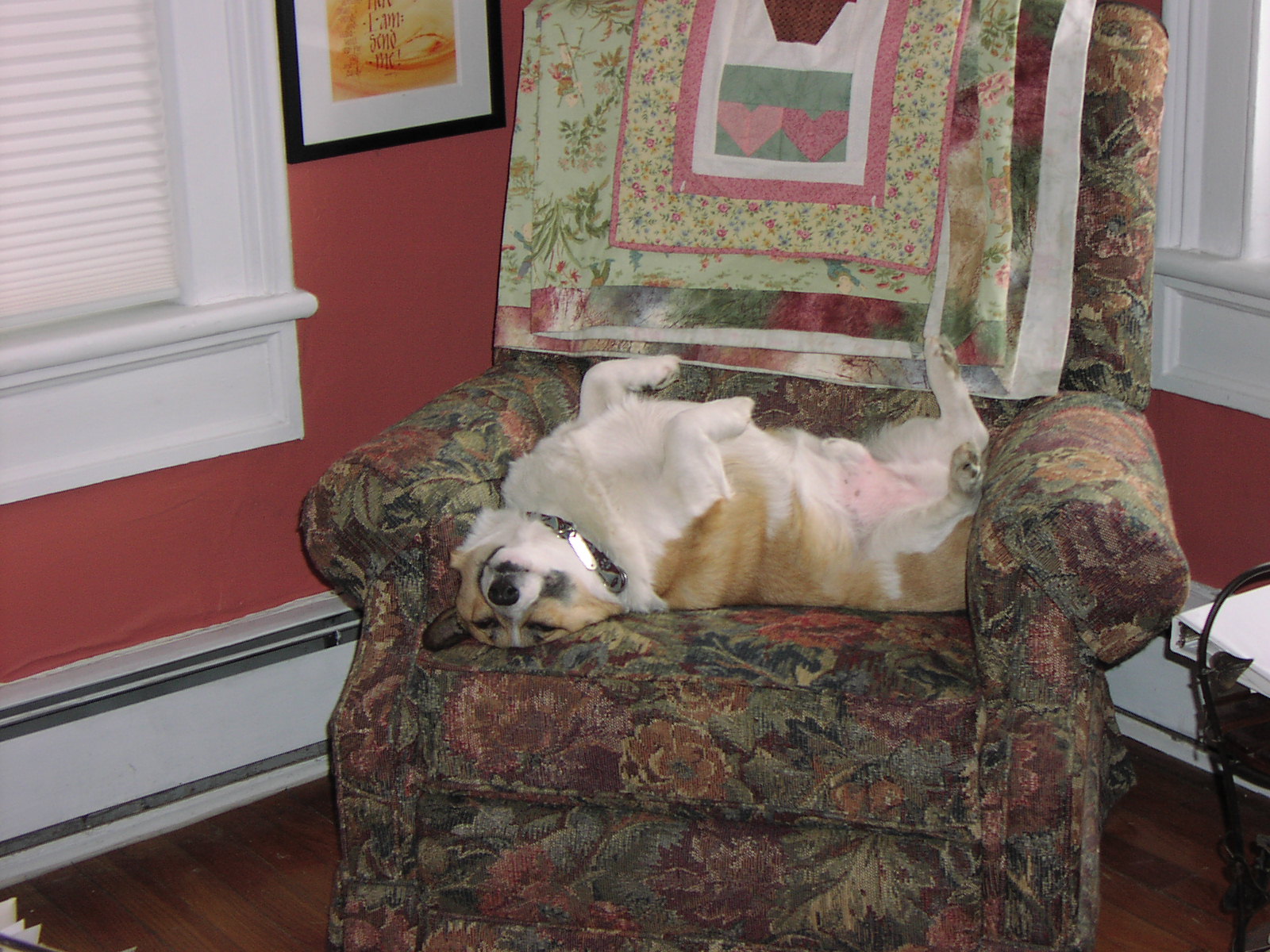 When parishioners or others come to see me, Caeden gets right up on the couch with them and helps them talk about things and feel comfortable by encouraging them to pet him endlessly. At the first sign of sadness or distress he encourages them to give him a belly rub and all their troubles will melt away. Amazingly, it works! When I’m working on a sermon he is with me in the office, usually sacked out on his back in what used to be “my” chair. 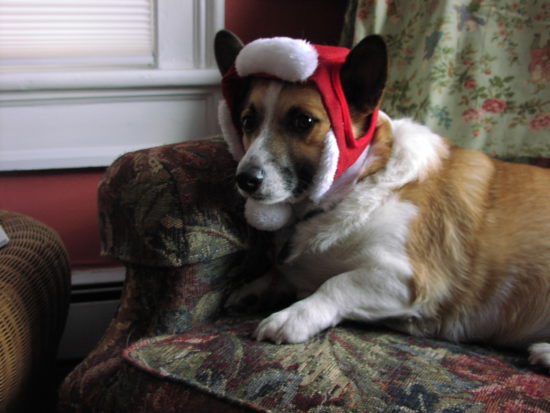 Our church has a before-and-after-school child care program where Caeden is welcome and doted on by the children. Because we live right next door to the church in the middle of the municipal square, Caeden is certain that he is appointed to protect and defend all the property within his sight. He is willing to assist (and visit) the police whenever he can and always greets them like he’s one of the boys.

His favorite place to visit is the library, where he can meet all kinds of new people and help me pick out books. He has been invited to come and help with some of the children’s programs (having kids read to him) and we will start setting aside time to do that in May. 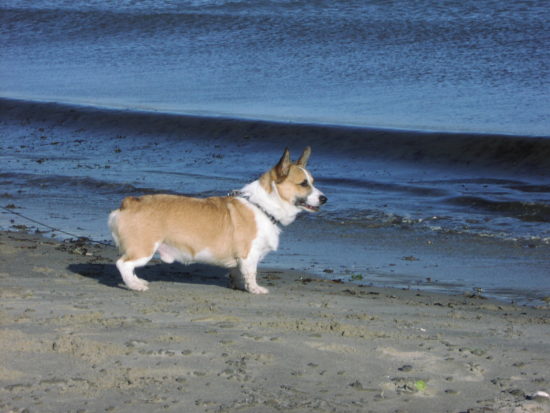 To my surprise, Caeden loves to swim. Anywhere there is more than an inch of water, he’s game! Unless it’s the bathtub, and then he will do anything not to have a bath. Last spring, we took a trip to Noank, Connecticut for a week of R and R, and he was as happy as a … well, a clam … which he managed to dig up now and then. He loves to run on the sand and bark at the waves. 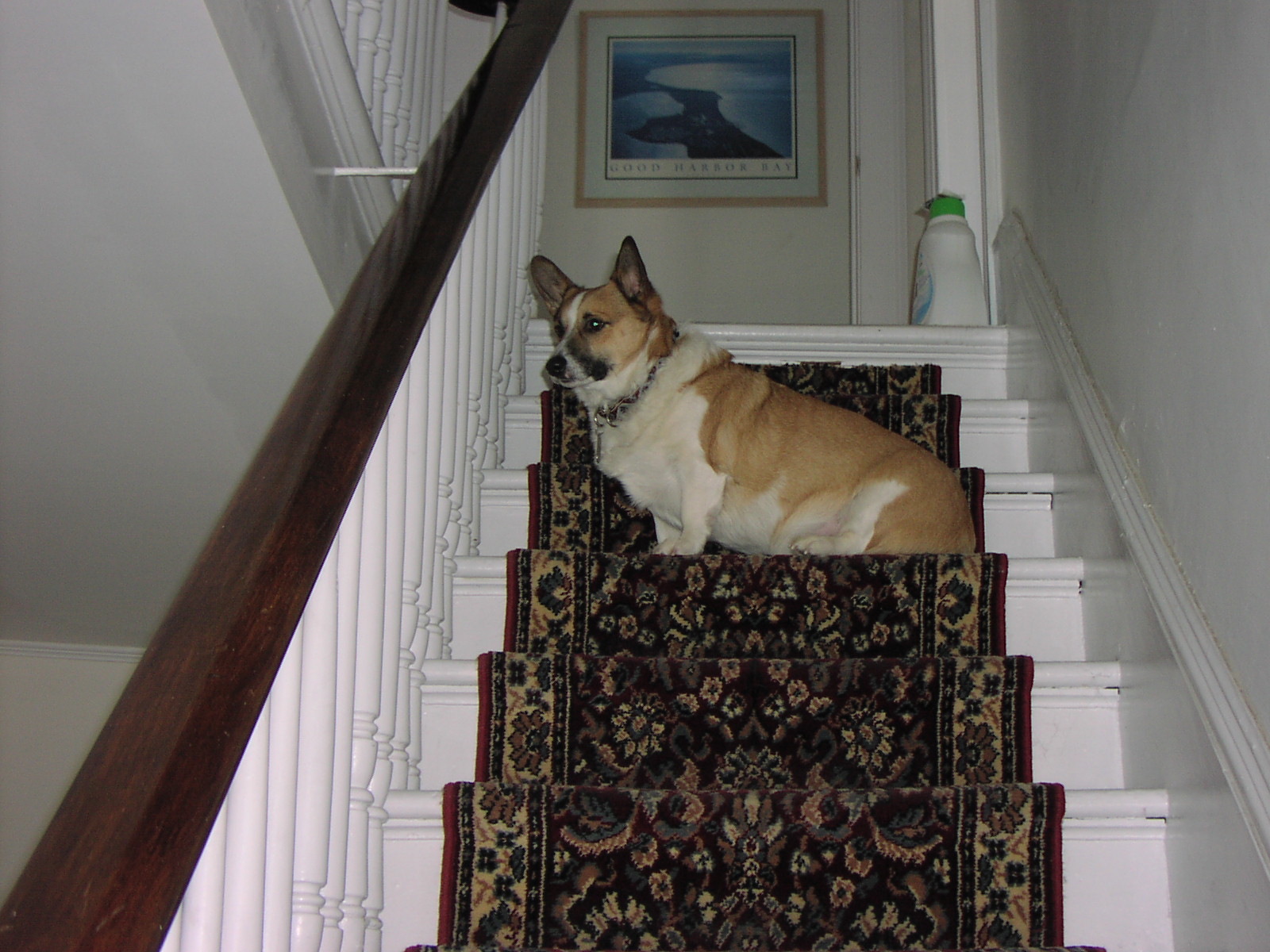 We have so much fun with him; he is a wonderful ambassador in the community (many people say hello to him and never even notice that there is a human being at the other end of the leash). I couldn’t ask for a better companion. Everywhere we go, people respond to his sweetness and his spirit. 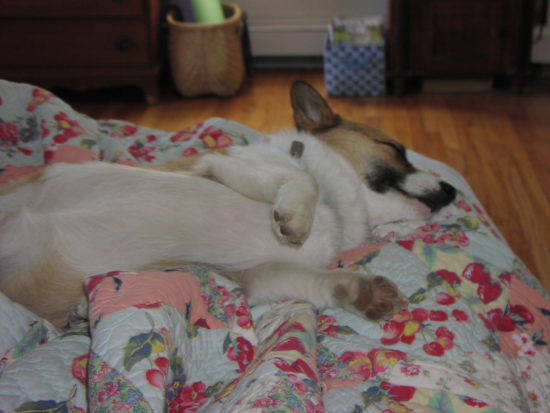 Caeden is a Welsh name that means “spirited warrior” but in some other language it might mean “couch potato” because once the sun goes down he loves to climb up on the couch and keep us company, whether we’re reading, watching TV or just having a conversation.”

Caeden, you rock the Corgi socks! So says I, and I am the boss around here. 🙂

Ten year old Frankie stakes out his favorite spot on the couch. Flooftastic.   Jasper still looks a lot like a puppy, but he ... END_OF_DOCUMENT_TOKEN_TO_BE_REPLACED