Irrepressible Ein is named after a cartoon genius Corgi who was bred in a lab. Although he appears to be a Corgi, there is obviously the heart and soul of a very bright, slightly rascal-ish person behind those eyes. 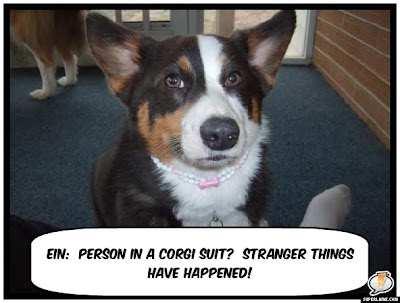 He does have classic Corgi-ish traits, however. According to his Mom Nicole ” Ein is a pig. Some of his favorite words are eat, dinner, treat, biscuit, breakfast, etc. Just about the only thing he WON’T eat is tomatoes. When he was younger, my husband once said ‘I bet if we let him, he’d eat until he made himself sick, and then eat some more.”
He was right.
“When Ein was about three, we had a kitten in the house – a stray we found and were searching for a home for. Apparently, I left the bag of kitten food within Ein’s reach. We came home one day to find the nearly-new bag of food was 1/3 empty and there were several piles of doggy vomit on the floor.”
Hmmmm, guess who? 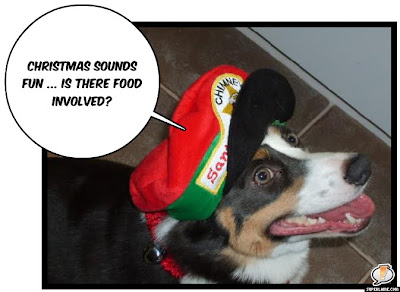 Two of Ein’s favorite words are “ride” and “park”. Whether it’s a one mile jaunt to the supermarket or a 23-hour trip to visit the relatives, he loves being included. Ein knows it’s a special treat to go on vacation without his canine brother and sister, because before vacation he’s on his best behavior. Ein is comfortable in new places and enjoys exploring them, the kind of Corgi who “walks around like he owns the place” even if it’s his first time there.
Sound familiar?
He absolutely hates to be left at home when his people go out. When told to get behind the baby gate, his expression communicates both disdain and disbelief: “You’re kidding, right? You mean the OTHER dogs have to stay here. Right?” 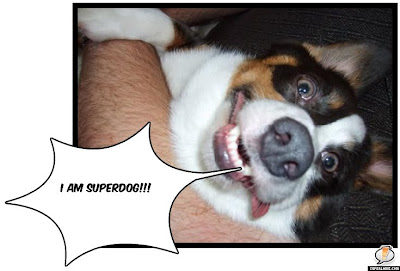 This four year-old Cardi has a strong herding instinct. Mom thinks he’d make a good herding dog if he were more disciplined. His favorite toys are things he can herd – remote control cars, the laser pointer, the cat toys that have a mouse or ball inside a track (all subject to destruction once caught).
At the dog park, he doesn’t play with the other dogs, he herds them. His favorite activity at home is barking at his Lab-mix brother Tucker until he runs, and then chasing him. Says Nicole: “We herd backwards – the ‘sheep’ (Tucker) decides where to go and the herding dogs (Ein and our Rough Collie, Colleen) follow. If one of the herding dogs starts to get too far away, I call Tucker over to me. The herders will follow him.” 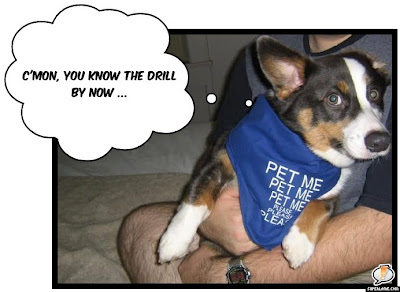 Ein is very clear about his likes and dislikes. He jumps in the bathtub to let the ‘rents know he’s out of water. He’s opinionated (don’t touch him when he’s sleeping or else he’ll huff under his breath and fuss), outgoing, and “just full of life.”
“I just can’t picture my life without a short-legged, fuzzy ‘human’ in it”, Nicole muses. “Sometimes I wish he was less independent and more cuddly like the Collies are – but his independence is what gives him is confidence and adaptability.
It’s what makes him who he is.”
* * * *
Welcome to The Daily Corgi, Ein!
Four paw salute to you, and barrels of biskies.
CORGIS SEMPER FI!

Ten year old Frankie stakes out his favorite spot on the couch. Flooftastic.   Jasper still looks a lot like a puppy, but he ... END_OF_DOCUMENT_TOKEN_TO_BE_REPLACED