Penni A. of Albuquerque, New Mexico writes that Kip, Chase, Holmes and Inca of Elyan Cardigans are very excited to appear on The Daily Corgi “because they are spotlight seekers of the worst sort.”
(Wow, that’s a new one. Very unsual for Corgis ;-). 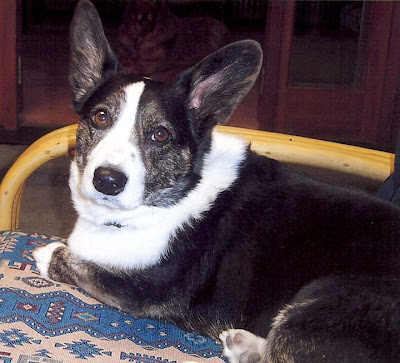 “Kip was my first Cardi. He is one of the happiest, sweetest and most willing dogs I’ve ever known. Kip and I were a Therapy Dogs, Inc. team and he served as a Reading Education Assistance Dog. He was crazy about his second grade students. Kip earned a Tracking Dog title, his Rally Novice Title, and a Companion Dog title. He was the official people greeter at the house and thought herding was huge fun. Kip was always the go-with guy”. 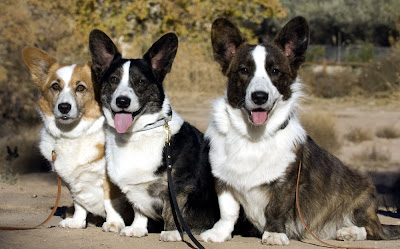 Kip (center) with Inca (L) and Chase (R)
“He is now taking care of long time friends who asked “Why did no one ever tell us about this breed?” “
Hmmm – must have been a Communist plot! 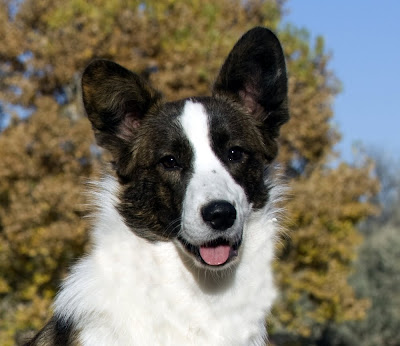 “Chase is THE MAN – just ask him! He is an American and Canadian Champion, has earned his Rally Novice title and passed the American Temperament Test Society temperament test. He is high energy and bossy, but loves to work. We hope he will earn his Companion Dog title in May. He loves agility, sheep, tracking, and greeting my clients. When his two sons were born (Holmes and Watson), he took on the chore of raising them and has been a wonderful Dad. I suspect he just wanted someone to play with him. Chase has a journal on his web site where he talks about his life: http://champion-chase.com.” 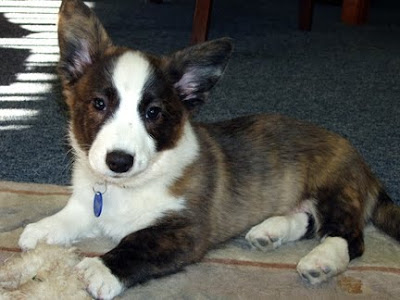 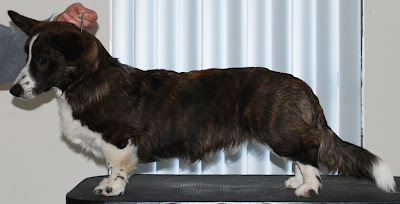 Holmes at six months, March ’10
“Holmes is the brindle baby. He is sweet and funny, a toy-thief with razors for teeth. Holmes adores his Dad and will play with him until he drops, then curl up next to him to sleep. We have high show hopes for little Holmes, but know that whatever he does it will be done with the greatest zest for life, a wagging tail and a happy smile.” 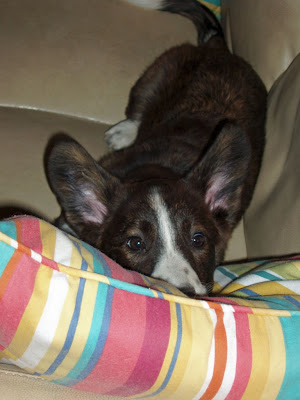 Whatever it was, I didn’t do it! 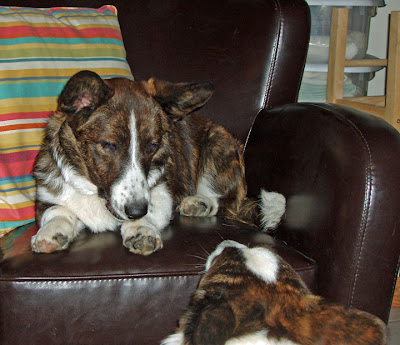 Sorry Dad, I finally figured out how to get up here and now the chair is MINE. 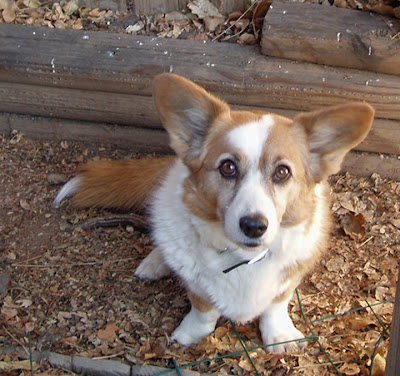 “Inca is the red goddess. She is an AKC Champion and has earned her Rally Novice Title. She is also a Therapy Dogs, Inc. registered therapy dog. Inca loves visits to nursing homes the best. She’s sweet and low key – until she sees sheep – then she comes to life. She also loves agility – probably because she gets lots of treats. Inca is an official furniture dog – we wouldn’t want her precious tummy to touch the floor.” 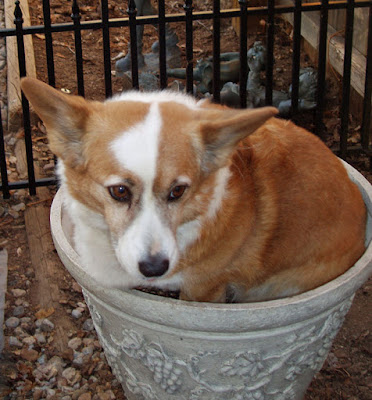 Of course, a goddess must have a throne; Inca has claimed the flower pot as her own.
“I call my Cardis ‘The Complete Corgis’. Pems are best described as the “party dogs” while Cardis are the “designated drivers.” I had a Pem who was sweet and funny, but they just don’t have the same outlook on life and on work. The Cardis are more like my German Shepherds were — more focused, more thoughtful — though still clowns.” 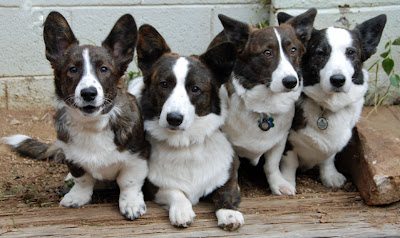 Holmes, Chase, Molly (Chase’s litter sister) and Alice (Chase & Molly’s Mom)
“I find my boys are the more willing workers. The girls love themselves and the boys adore their owners. However, in my experience, if there will be mayhem in the household, it will be two boys being buttheads with each other. I’ve also found the girls are more likely to punish you if they are unhappy (like you brought home a new puppy) — eat a corner of a leather chair, chew off the edge of a rug. The relationship with the boys is so personal, while the girls are more distant. I love training my boys — they never roll their eyes at me. The girls, however, do.”
“I’m a health nut, so have dogs that are physically capable of all types of dog activities — herding to agility to obedience/rally to tracking. The dogs are supposed to be versatile and both Corgi breeds are — I just prefer my Cardis — for looks, temperament, and trainability.”
“I have the “best” gang. They are my companions at home and at the office. Often (if there is no dog at work on a particular day), my clients will come in and ask, “Where’s Chase?” So far I haven’t had to reschedule any appointments because the dogs were not in attendance, but I know the day is coming.”
* * * * *
Here are links to the organizations Penni and her dogs volunteer with:
Therapy Dogs Inc.: http://www.therapydogs.com/
Reading Education Assistance Dogs: http://www.therapyanimals.org/R.E.A.D.html
* * * * *
Thanks for sharing your “gang” with The Daily Corgi, Penni!
They are beautiful and tons of fun.

Ten year old Frankie stakes out his favorite spot on the couch. Flooftastic.   Jasper still looks a lot like a puppy, but he ... END_OF_DOCUMENT_TOKEN_TO_BE_REPLACED