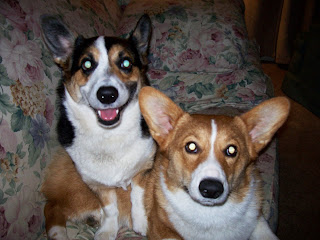 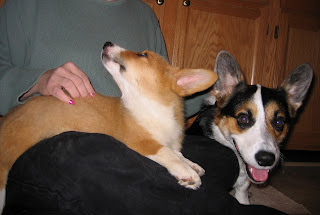 In early days, when Tucker was the new kid on the block — and the back.
Red and white Tucker has a “warm, lovable personality and generally gets on well with other dogs. He’s the non-confrontational one, avoiding dogs or people he doesn’t cotton to. Where his brother Blaze believes all humans are on this earth to pet and adore him, Tucker needs to check a person out before they can pet him. He won’t snap, but he will back away and put out a soft, low growl. Once he knows you’re OK, he’ll approach you — human or canine.” 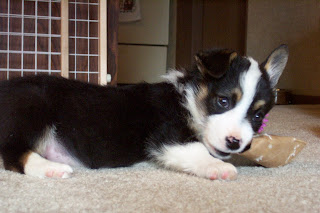 Blazer in pupper days. “I tried to teach the kid everything I know, but he just wouldn’t listen. He’s kind of a Momma’s Boy.”

Blaze is a big-time talker, and like many a Corgi he is incapable of running without barking. “He’ll make the funniest noises when he wants something” writes Paula. “It starts out like a yawn and then turns into a type of talk. He is also what I call a “humph”-er; he’ll lay down with his face between his front paws and go “humph, humph, humph”. When he does this his whole body will shake! When I talk back and ask him what he wants, he ups the exaggeration, even to the point where he’ll be on his side kicking his paws while vocalizing. He usually does this when he wants a treat or a rawhide.” 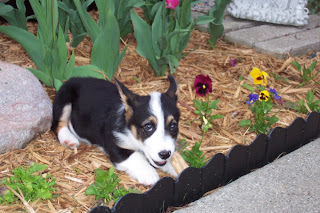 Hmmmm, sounds like somebody knows how to get precisely what they want. How typically Corgi is that, huh?

“What’s it gonna be, Mom? A treat or a trip to the backyard?”
Tri Tucker is a year and a half younger than Blaze, but he is definitely the alpha male. Although Tucker rules the house, he and Tucker get along and play well with one another. “One of their favorite things to do is to race to the back fence. They’ll wait at the back door like two horses at the starting gates. When I open the door I tell them to wait and they watch me like I’m the starting flag in a race. When they get the OK they dash out the door as fast as they can shoulder to shoulder, even bumping one another as if they are trying to mess up the other’s run, barking and making all kinds of racket, competing to be the first at the back fence. Once this is done they go their opposite ways and do their business.” 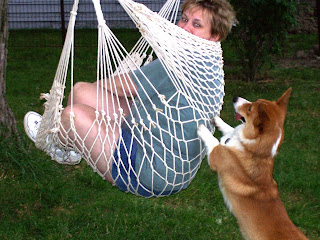 Tucker’s talents include pushing friends and family around in the hammock, short legs be darned.

“Tucker and Blaze love to wrestle with one another. They’ll grab each other by the neck, collar, whatever they can reach, and pull and tug each other across the floor.” 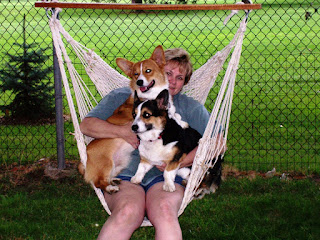 Double lovin’ on special someone Dottie. 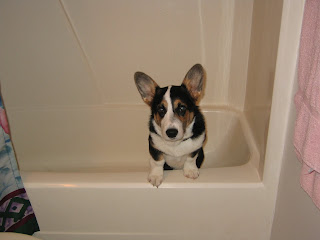 “Blaze is a bathtub baby. “Ever since he was a puppy he’s been one to jump right into the tub and try to get the water to come out of the faucet. He doesn’t like to swim and isn’t crazy about baths, but an empty tub is a fascination for him.” 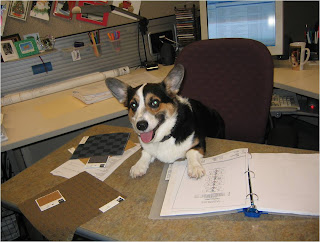 “Just crunching the numbers on the squirrels I’ve crunched”.

In addition to his empty tub enthusiasm, Blaze prides himself on being the local Sheriff of Squirreltown. He tolerates NO squirrel in his yard or the neighbors’ yards to either side of his. Squirrels should not be allowed to exist, that’s all there is to it. 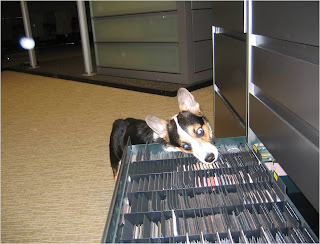 Reviewing the files for accuracy. Somebody’s gotta keep track of my stats!

He’s more than happy to be out there for hours as King of the Yard on Guard, keeping watch for foolish golfers with bad shots (he makes sure they know when their ball has come too close to his fence). He sits — not lays — for hours on sentry against marauding squirrels, birds or errant golf balls. A few unfortunate birds have fallen prey to his quick jaws; Mom has to take them away or he will send them on their way to bird heaven. 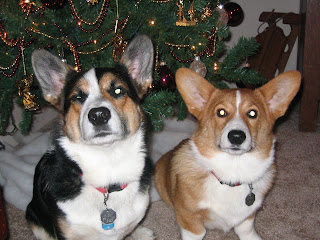 “Hey Tucker, look! This is my best Clint Eastwood face.”

Tucker’s preference is to be with Mom Paula At All Times. All that other stuff his brother takes care of, because Mom is numero uno. 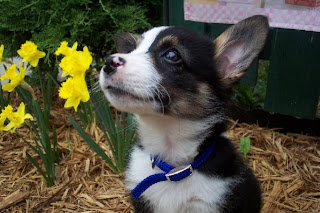 A wee Blaze inspecting the fauna.
For all of his energies, Blaze is a cuddler who loves to be held. “I mean a full body hold where his head is under your chin and his butt is at your knees, his check to yours, lying there as long as you’ll stroke him.”
Hmmmm, that puppy part of him never did grow up, huh?
GOOD for YOU, Paula!!
* * * * *
Welcome to The Daily Corgi, Blaze and Tucker!
You’re a couple of characters we’re all glad to meet, and as of today you’ve got lots of new fans — guaranteed.

Ten year old Frankie stakes out his favorite spot on the couch. Flooftastic.   Jasper still looks a lot like a puppy, but he ... END_OF_DOCUMENT_TOKEN_TO_BE_REPLACED