Kimberly G. wrote The Daily Corgi about her seven year-old Pemmie Spencer, one of the two dogs who make her house a more fun and lively place to be every day of the year. 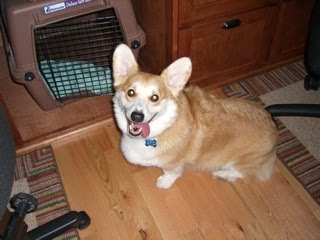 Spencer LOVES his kennel.
“Spencer is the most cuddly Corgi that I have owned and known” writes Kimberly. “He loves all people and will gladly give you a hug if you get down low enough. His favorite thing to do is run over to you when he catches you lying on the floor and lay his chin/head across your neck; this is his hug. He will stay there for a few minutes and then with a quick swipe of the tongue he is off to do something else.”
(Ed. note: I want to experience this! Spencer, come to my house!) 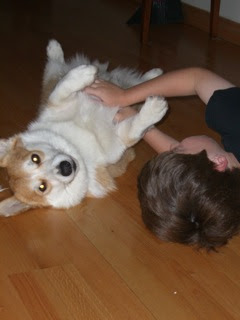 With his pal.
“Spencer and my son are great buddies and spend lots of time playing or just hanging around.” 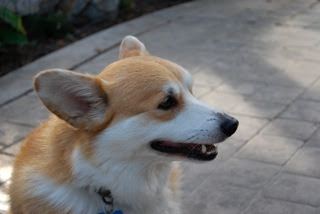 “Spencer is a food hound through and through. I don’t think he has ever chewed a single piece of food or treat. His housemate Wookey, the female English Cocker Spaniel is the exact opposite. She is such a girl and very slowly chews every piece of food even when Spencer is sitting and watching her closely. He, of course, is done with his meal in about two seconds while she takes ten minutes. These two have never fought and Spencer has never tried to steal her food. They are very respectful of each other.”

“They also love to play with each other and can often be found running around the house chasing one another. Actually, Wookey runs and Spencer cuts her off in the corners (she is much faster than he is but of course he is much smarter). She then jumps over him and usually he tries to change direction but ends up in a “roll” until he can right himself (wonder how he blew his knee out?) They are very entertaining to watch.” 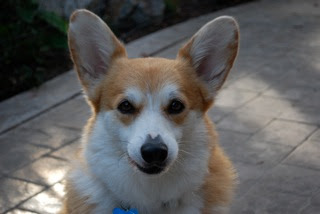 “One of Spencer’s favorite things is long walks on the nearby university campus. He and Wookey could spend hours up there chasing squirrels and bunnies. We have had to cut back on our walks recently because Spencer had to have surgery on his knee. All is well now and he is almost back to normal, thanks to lots of tender loving care and many hours spent in water therapy which did wonders. He actually enjoys the water therapy and gets excited in the car on the way there.”

“One thing Spencer doesn’t like is Chocolate Labs. No idea why, but in his mind they are out to get him. He has never had a run in with any dog but he must have dreamed up that they were evil (too many movies?)”
* * * * *
Spencer, welcome to The Daily Corgi!
You sure are Corgi through and through … hopefully someday you can overcome your fear of Chocolate Labs because really … they are nice dogs!

Ten year old Frankie stakes out his favorite spot on the couch. Flooftastic.   Jasper still looks a lot like a puppy, but he ... END_OF_DOCUMENT_TOKEN_TO_BE_REPLACED