How-dee-do, friends! Toby here, with a brief update on the home front happenings.

Seems many of you have got hold of my family’s p.o. box number (did I release that? Must’ve been in a Kong-induced haze) and sent lots of cards. I mean LOTS. Like more than I can count (or sniff at one time) lots. Snoopervising means keeping up with all of it, and I’ve begun to enjoy delivering my own updates, but this one’s been delayed because of a slight wrinkle in plans.

You human types aren’t nearly as sturdy and built for speed as we Corgis are. (No offense. Just an observation. I observe ’til the cows come home and I’ve got them in the barn, two by two, no loitering. Miscreant cows are dealt with severely). Anyway, the best laid plans of Corgis and men are sometimes thrown a monkey wrench. Hence the delay in my reportage. 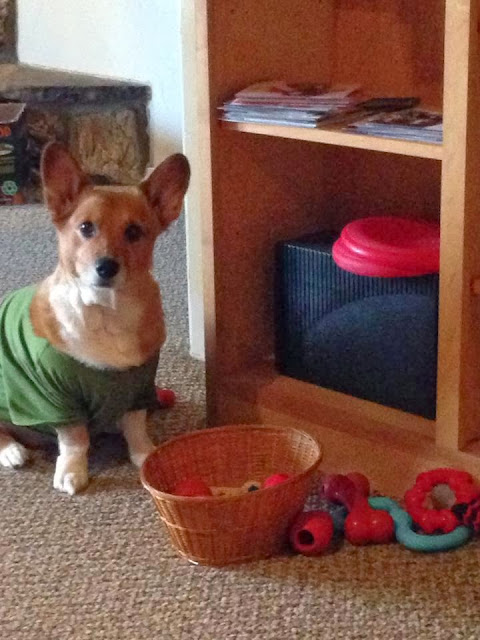 I know you will forgive me, because you have in the past (and LOOK AT THIS FACE). Also, I did not write much from the hospital, but you held no grudge. The tubes and bandages made it nearly impossible, and whatever stuff they were dripping into my veins, well, let me tell you — that stuff must go for big bucks on the black market. Although I made plenty of connections during my hospital stay, I’m far too busy to get into that nonsense. It would be doggerel for me to even go into it!

Tucker was good enough to step in as cub reporter on the Team Toby beat. Credit where credit is due! I might give him a promotion from bat boy. He’s got the right stuff. He beats a hasty retreat in a dangerous situation, but who can blame him? Not every dog has the nerve, the gumption, the moxie, the hard as nails determination I do. It’s all there, hidden beneath the fur cape. My secret is out. The press has been at my door for weeks now. I can’t say I really mind it, but I never asked for the fame. Remember that. I am still Toby. Which means meal times stay the same, no matter what.

So back to the cards. Dozens and dozens of cards, some from far off places. Timbuktu, maybe. Mom and Dad have opened some, but there are more still to be gone through. My help isn’t necessarily needed here, but when did necessity ever stop a guy? Like I say. Snoopervising. It’s in the Corgi handbook. Chapter four, page 92. My paw to doG.

I’ll be back when they’ve finished with the job, with a hard data update. How many cards, from how many countries (Canada, you count too), that sort of thing. I know people like numbers. Seems a waste of time to me. Those numbers on a clock — who needs ’em? My stomach tells me what time it is …

Ten year old Frankie stakes out his favorite spot on the couch. Flooftastic.   Jasper still looks a lot like a puppy, but he ... END_OF_DOCUMENT_TOKEN_TO_BE_REPLACED