You won’t want to miss this story about King Tut, a New Jersey Cardigan who saved his diabetic Mom’s life twice by alerting her to severely low blood sugar episodes. 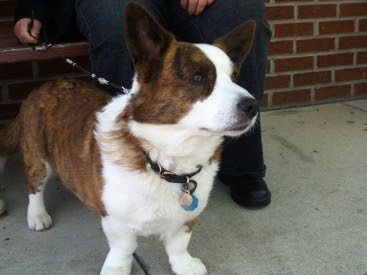 King Tut won an award for his abilities and will be featured on a future Animal Planet TV program.

Thanks to Daily Corgi Reader Emily Rose G. for passing the article on to me!  Emily’s Cardigans Galaxy and Traum, who appeared on the blog as Dogs of the Day back in April, also possess special alert abilities.  “They began alerting me to oncoming migraines a few months ago, which is a huge help.  Because of them, I now take mind-altering medications only as needed, versus every single day.”
“Traum began on his own, and Galaxy began following his lead on the blood sugar levels. Amazing how intuitive these little dogs can be! Galaxy works full-time as a medical alert service dog, and Traum worked as my SD for five years before she went down in the back last year.”
Gotta love those wonderful Corgis!

Ten year old Frankie stakes out his favorite spot on the couch. Flooftastic.   Jasper still looks a lot like a puppy, but he ... END_OF_DOCUMENT_TOKEN_TO_BE_REPLACED