Can you BELIEVE Sammy lingered in Petland for three months ’til his Mom and Dad Brianne and Erik picked him out as a “clearance” puppy? 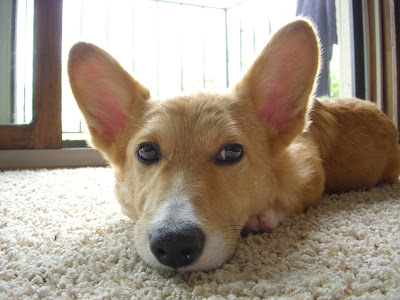 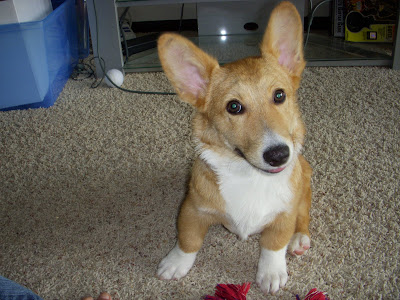 Boy, did I luck out here or what?
“We were moving last summer into an apartment building that allowed dogs up to forty pounds. Erik also loves fish, so the day before our move we went to Petland to get bags to move his fish when we stumbled upon this little Pembroke Welsh Corgi puppy in a window curled up all by himself, sad and lonely.” 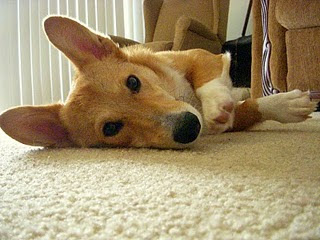 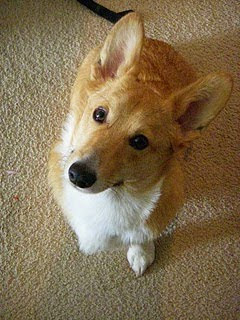 “Erik wanted a Corgi, but I had never seen one and agreed to “Just see him.” When that little guy walked right up to me and gave me a kiss on the nose, I was a goner!” 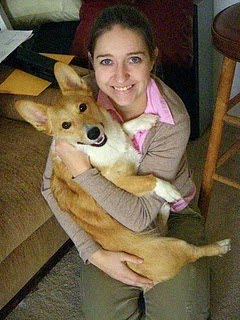 Love at first sight.
“Erik and I worked it out with Petland that we wanted this four month-old puppy, but we were moving the next day and couldn’t take him home right away. So he had to stay at the pet store one more night. The next day we were back and brought him to our new place. It was exciting to see him discover the world for the first time!  He hadn’t been in grass or fresh air since arriving at Petland three months earlier.  He didn’t know what to look at or smell or touch or listen to first. That is when he aquired his nickname, our little “ADD clearance puppy”! Now when he goes into his zone in a place with lots of new stuff and smells, we call it his ADD mode! ”
“His full name is Samerson Wegener. Samerson was a name of a puppy in a dream I had before getting Sammy, and Wegener is after Alfred Wegener, the founder of plate tectonics (I am a geology major).” 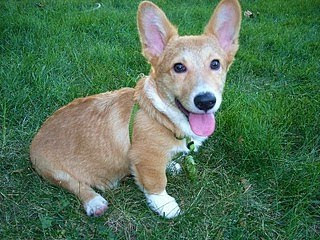 YAY!
“The Monday after getting Sammy we went to pay our pet deposit, and found out we couldn’t have him there. They apparently had a policy in the addendums that no dog under a year could live in the apartments. It was either the apartment or Sammy. We turned in our thirty day notice that day. We had to pay a month and half of rent to break our lease, had to find a new, pet-friendly place with a low deposit and pet deposit. We weren’t sure what we were going to do, but never thought twice about it. Plus, all our stuff was in boxes already!” 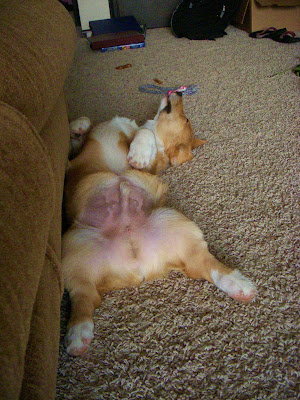 “I’ll supervise, you guys move.”
“For the first couple weeks, everything was new and he got tired out so easily. We brought him home at ten pounds.  Five days into our relationship he was taken to his first checkup at the vet. He was already twelve pounds!  Two weeks later when he was taken for his neuter he was eighteen pounds!

At the first vet visit we learned he had hip dysplasia and loose joints already, probably from being stuck in the crate at Petland. They were impressed with all the muscle he had gained when we brought him back two weeks later. Originally he was small for his age, but getting big fast. Our vet had no idea how big he would end up — anywhere from 25 to 35 pounds! We immediately put him on the best food and got him joint health bones, doing anything we could to make his later life easy, as expensive as it may be.” 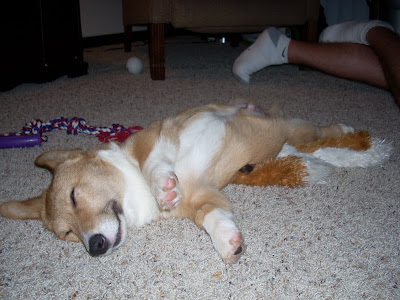 Exhausted from all that supervising! 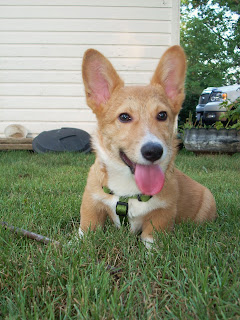 The party starts right here, people!
“At the six month anniversary of bringing him home, Sammy got doggie ice cream and Erik and I got our own ice cream. Over these six months we have seen all his crazy personalities. Mostly I can see how not only is he my world, but I am lucky enough to be his world. Everytime I come home he is so happy to see me. He jumps up for me to pick him up and hold him. If it isn’t long enough, he will just jump right back up. When I am sick, he curls up with me. When we sleep, he sleeps on the pillow above me, and curls his head around mine. I have seen his protectiveness grow — it’s amazing to see how fierce such a little dog can be! It took him two weeks, but I was there to see him learn the stairs (our first apartment was on the third floor). I have seen him love the snow and chase snowballs outside. He adores kids and is super gentle with my little cousins and our friends’ kids.” 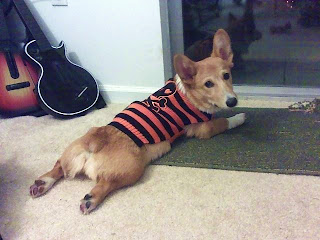 I may look tough, but I’m really very tender.
“Sometimes Sammy was our “special” dog who learned the seven different words for food (breakfast, dinner, meal, food, d-i-n-n-e-r, snack, kibble) but couldn’t figure out his name! He even knows cheese and bacon now, perhaps his favorite foods. He also knows “ice cube” and will run to the refrigerator and wait for one. For a while he would respond to “Better” but not “Sammy”, but we have worked with him and he can now sit, stay, come (kinda), and dance! Sammy and I often dance as I get ready in the morning to the music. He is our silly puppy who loves to pull out each toy out of his toy box and leave them for me to pick up, not actually play with them. Sammyloves his rawhide bones. He can take down one meant for Labs in just 2 hours! We have gone doggie trick-or-treating. He’s in doggie day care where his report card always says “Not shy at all!” 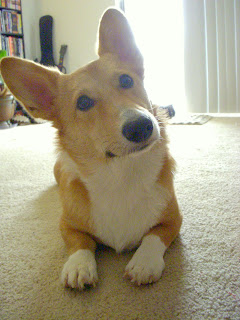 Allow me to introduce myself …
“Sammy has managed to get everyone’s love and affection. My grandma is eighty-nine years old and will ask me how he is doing and when I will bring him over again. She has bought a book on Corgis because of Sammy. She even has me put him on her lap! Erik’s parents have a Shar-Pei that was abused as a puppy and doesn’t like outside animals or people, and is more tempermental in her older age, but our Sammy has brought out the puppy in her! She runs past everyone just to sniff him. She comes up to our bed as soon as the sun comes up to ask him to play! During Christmas she got in the closet and brought out her tug of war rope she hasn’t played with for over three years!”
“Our neighbors have a Bichon Frise mix who’s afraid of dogs bigger than her and used to hide from Sammy behind her parents’ legs. Now they play together in the snow! We get stopped everywhere we go for people to pet a Corgi. My Mom’s office even asked me to bring him to their Halloween party!” 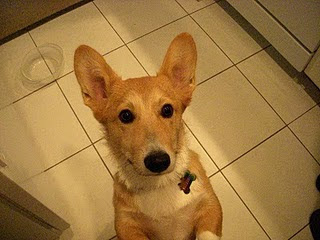 I’m not begging, I’m simply instructing them in sign language.
“Day to day, Sammy enjoys tearing apart toys methodically, relaxing on his back, watching all of our neighbors through the sliding glass window, begging for food and just being the king of his domain, with as many walks as possible. Sammy hates the rain, so our walks are very weather dependent. It all culminates when we get to go get the mail. He runs up and down the hallway as fast as he can! Then up and down the stairs, just to show them who’s the dog! Lots of smiles and kisses!”
“As a first time Corgi owner, I’m unsure how much of Sammy’s personality is Corgi inspired and how much is just him being amazing. I tend to lean towards him being special, but that’s probably because I am biased. I am just beyond words happy to have him. I love everything about Sammy,  from nearly ripping my arm off to get to the rabbits and squirrels (the “anti-Sammys”), to Sammy staring at speakers on the TV when a dog barks, to cornering him trying to brush his teeth!” 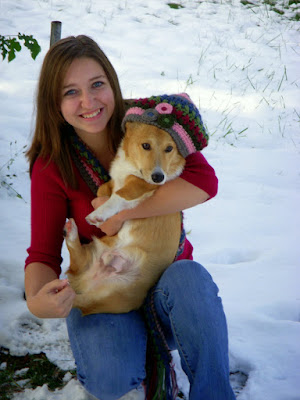 “Sammy is just the sweetest and cutest dog I have ever known or could imagine.”
Brianne, Erik and Sammy live in Omaha, Nebraska and Bri blogs about Sammy at
http://sammyadventures.blogspot.com.
*  *  *  *  *
Welcome to The Daily Corgi, Sammy!
I think you’ve just made about a thousand new fans!

Ten year old Frankie stakes out his favorite spot on the couch. Flooftastic.   Jasper still looks a lot like a puppy, but he ... END_OF_DOCUMENT_TOKEN_TO_BE_REPLACED