Sherri H. of Massachusetts shares this photo of the human/canine “pack” who marched in the town of Natick’s Independence Day parade, with the aim of spreading the word about Metro West Medical Center’s Pet Therapy Program. 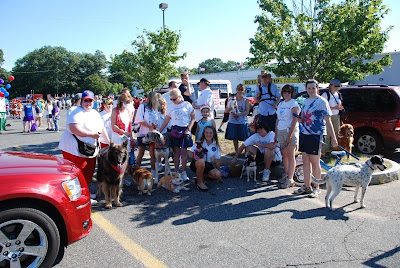 “We were lucky enough to be kind of at the head of the route, so we ended at just about 11 a.m.  It was hotter than you-know-what, but the dogs and people all did well.”
“Believe it or not, the dogs worked the crowds on the street and visited with everyone they could.  There were a lot of cheers and claps — it was great!  We went through a lot of water and ice for us and the dogs, but everyone did just fine.”
Sherri’s Pembroke Katie Bear, a therapy dog herself, marched right alongside everyone else;  she’s lying down just to the left of center in the photo.  Her friend Edward Bear is there as well, showing off his handsome pantaloonies.
Katie Bear made the local newscast when reporters visited the parade!  Watch for her quick cameo at 0.00:40:
http://topics.myfoxboston.com/m/32412262/pols-on-parade.htm
It’s a bar-O-o-O-o-tiful thing you guys did!
Way to go!

Ten year old Frankie stakes out his favorite spot on the couch. Flooftastic.   Jasper still looks a lot like a puppy, but he ... END_OF_DOCUMENT_TOKEN_TO_BE_REPLACED