Of Cameo and Pippin, Barbara M. tells The Daily Corgi “everyone’s lives will be enhanced by the sight of these splendid Corgis.”
I can’t say I disagree!
“Pretty Cameo has been with us for over two years.  This ladylike Pem, with dainty face and feet, is a former “professional mommy” at a puppy mill who was rescued by North Coast Corgi Rescue.” 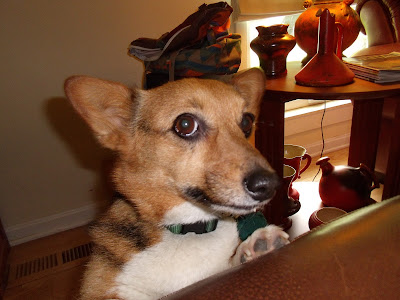 “She weighed 14 pounds when she came to live with us, with a terrible coat falling out in handfuls. She now weighs 17 pounds and sports a beautiful glossy coat.  Cameo loves being petted and held.”
Cameo’s dogster profile:  http://www.dogster.com/dogs/955560 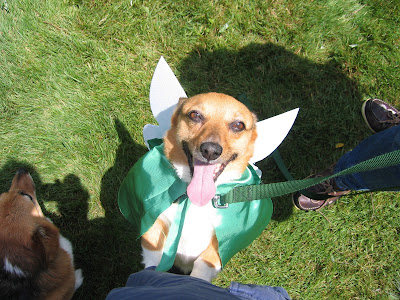 Cameo in her “social butterfly” costume.
“Her beautiful brother Pippin is a former stray who was on his own for a long time, and was picked up by an Ohio dog catcher.  His age is unknown but he’s perhaps 9 or 10, though that’s a WAG.” 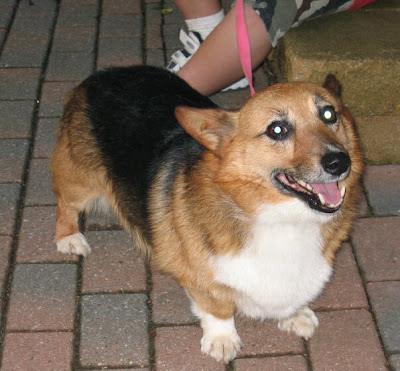 On the day he was adopted as “Shorty”.﻿
“Pippin had a head wound and a UTI and lived in foster care until we adopted him four years ago. Because he fended for himself for so long, probably catching rabbits and squirrels, food is very important to Pippin, who came to us as “Shorty”. Almost everyone comments on his serene, soulful nature. Like his sister, he too is a small Corgi, weighing 24 pounds. Pippin is a prince among Corgis, as good as he is beautiful.”
Pippin’s dogster profile:  http://www.dogster.com/dogs/342671 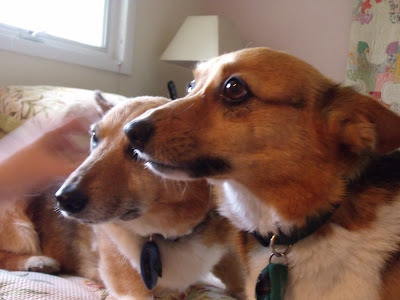 “Neither of the Corgis understands the concept of playing with toys: balls, squeakies, etc. They show mild interest at the squeak noise, but no interest in the toys themselves. Going for walks, being petted, and — in Pippin’s case, eating — are the most important things in the world.” 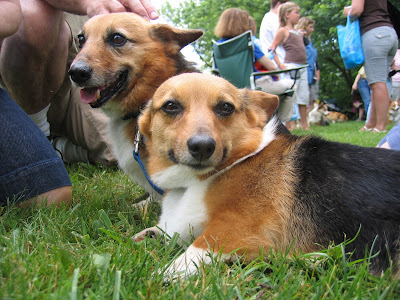 At the 2008 Corgi Fair in Ohio.
“They are allowed to bark only when the mailman is on the premises, and indeed that is the only time they do bark. When I see him coming, I open the door and take the mail directly from him, and they do not bark then. He has told me how hyper they get when I’m not home. He really likes them — when they’ve been out on their leashes he comes over to pet them and visit. But his arrival is the highlight of their day.”
*  *  *  *  *
Welcome to The Daily Corgi, kiddos!
You’re splendid Corgis indeed.

Ten year old Frankie stakes out his favorite spot on the couch. Flooftastic.   Jasper still looks a lot like a puppy, but he ... END_OF_DOCUMENT_TOKEN_TO_BE_REPLACED