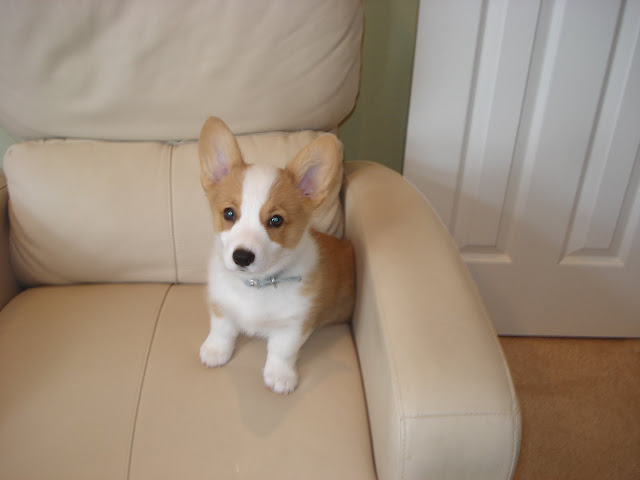 “As you pull up to the farm, a horse grazes nearby” rhapsodizes Amy. “A half-dozen Corgis run up to you, but not until you pass the post that says “Corgi Crossing”. The dogs KNOW where they are allowed to go and won’t set foot beyond it.” 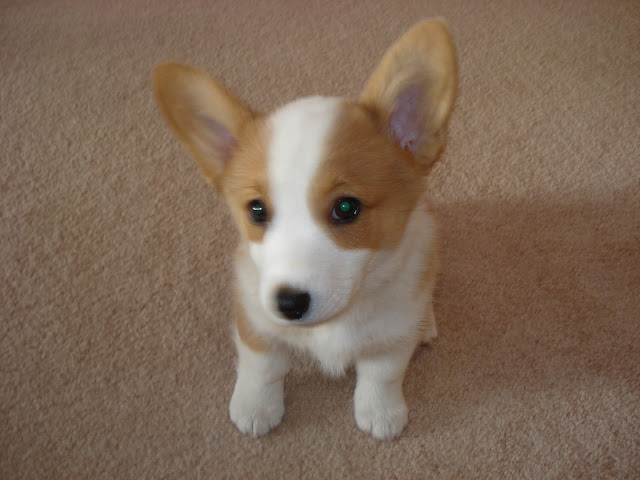 “As you continue on the path, more gorgeous Corgis come to greet you. Further up, a dozen or so Corgis are waiting to jump up on you.”
“From the adoptable puppies, we initially picked out a tri who was ready to go home around Thanksgiving. We petted him on my lap, but when we heard a tiny grrrrr, we realized he wasn’t taking to us very well.” 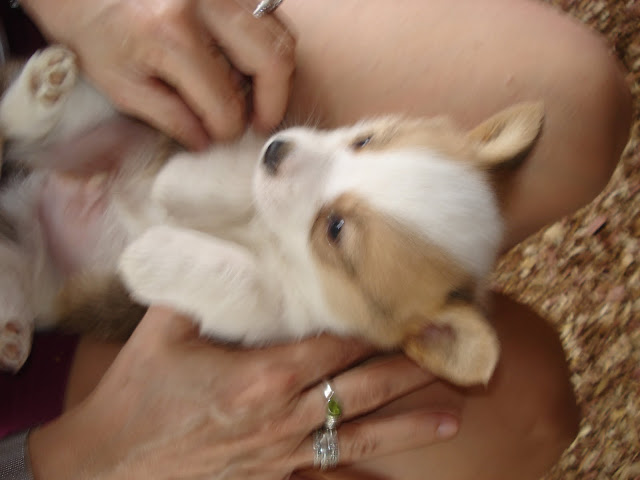 “My husband suggested we have a look at a younger group of pups who’d be ready to go two weeks after Thanksgiving.  I’d set my heart on a Corgi, and was determined that the puppy WAS coming home for Thanksgiving.” 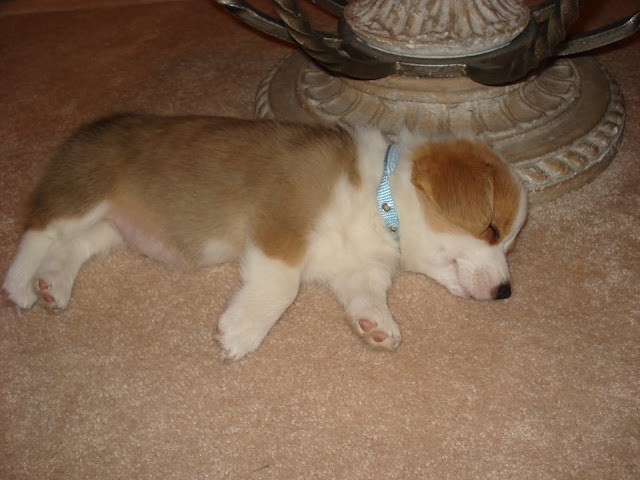 “In the end, we waited the extra two weeks for this gentleman with the gorgeous markings, took him home and named him Mitchell.” 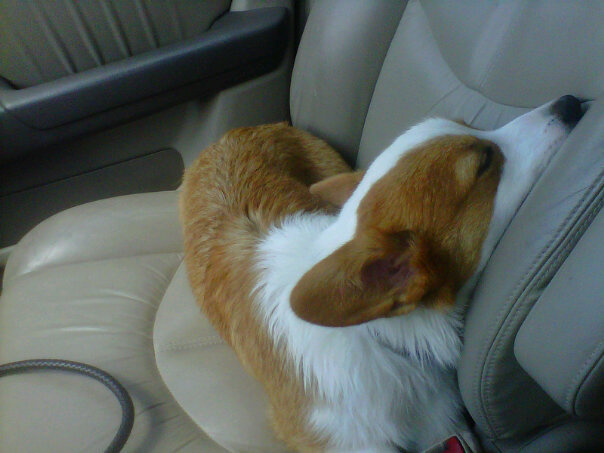 “He is very funny and VERY Corgi. He likes to speak (a lot), loves children and is extremely smart.” 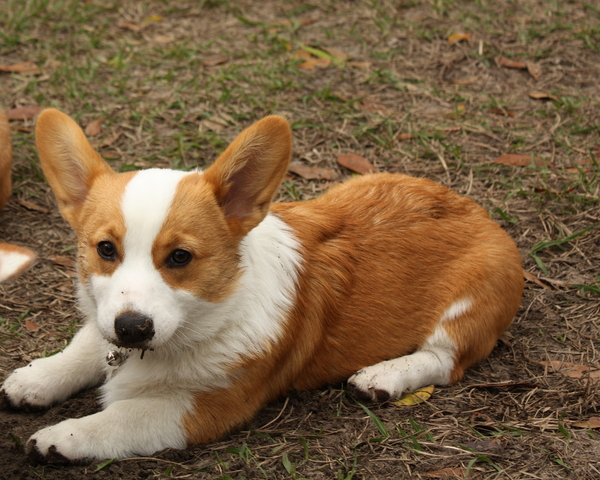 “He can “dance” (up on his hind legs, spins around), roll over, play dead when you say bang! and is learning to shake (harder). Mostly he is a ‘play boy’. LOVES to play. Best game ever? Soccer! This dog needs to join a professional dog soccer team. He could even play on a human team!  Mitchell is the best goalie ever.” 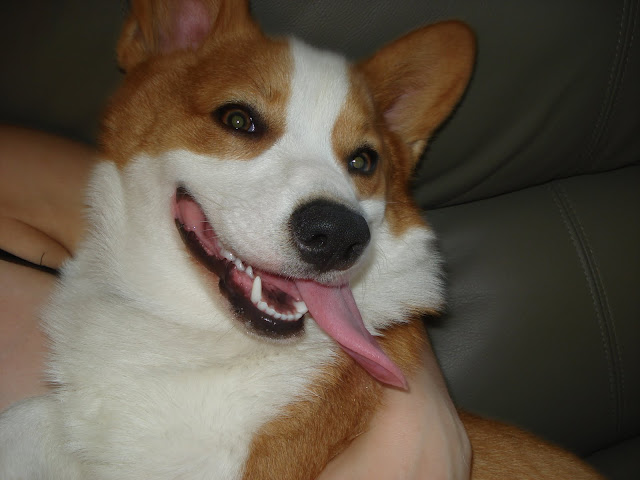 “Every day at 5:00 we have to play “bally” in our front yard.  He NEVER leaves the yard, knows not to go in the street, and will play until his tongue hangs to the grass.” 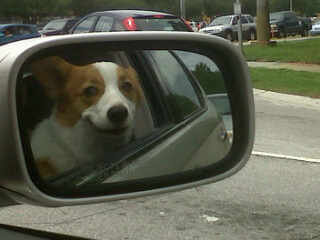 “Mitchell enjoys Corgi meet-ups. He doesn’t like laying around the house, and must be doing something constructive at all times … 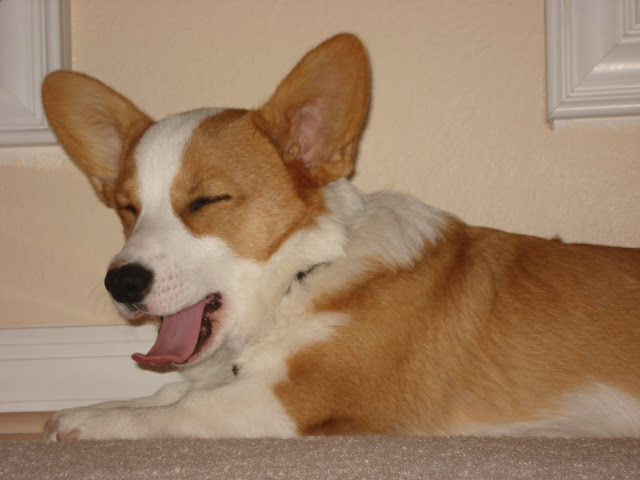 … which can occasionally tire even a Corgi out.” 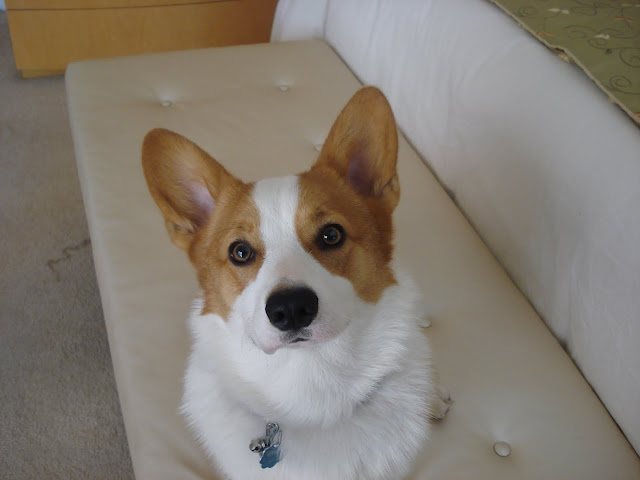 “While he’s a nice guy and a goof, Mitchell isn’t as loving as we’d like. Since he’s not yet two years old, we’re hoping he’ll become more of a lap dog.” 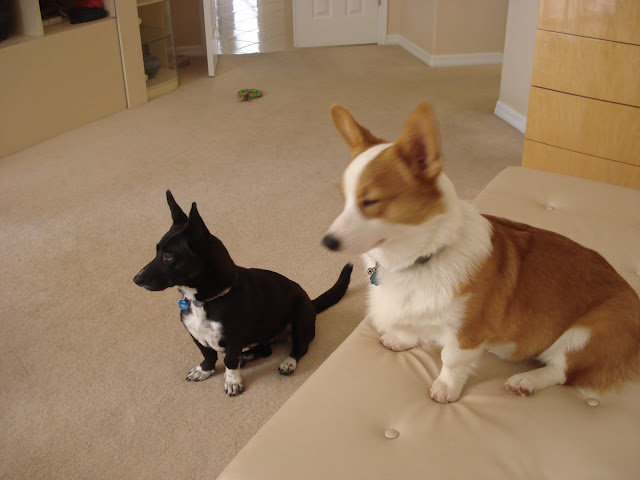 “Maybe being around sweet sister Joni, he’ll pattern himself after her.” 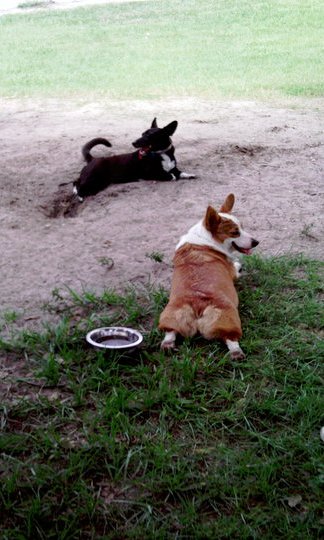 “The two of them crack us up rolling around playing. They are wonderful dogs.” 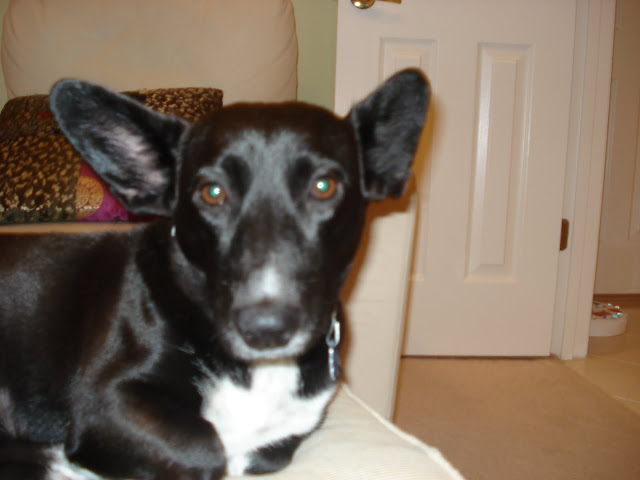 “Joni is about three years old. She was taken to the Miami/Dade shelter by Basset Hound Rescue, and Sunshine Corgi Rescue pulled her out.” 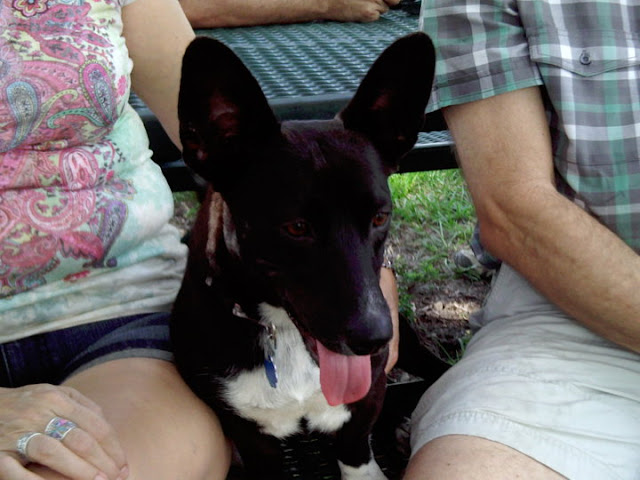 “Somewhere along the way, she got heartworms. The Sunshine Corgi Rescue foster Mom did a GREAT job seeing her through that, and Joni had to spend five weeks mostly in her crate. When we found her, Joni (then named Oni) was one week post-recuperation, and our vet said to take it easy for another two weeks.” 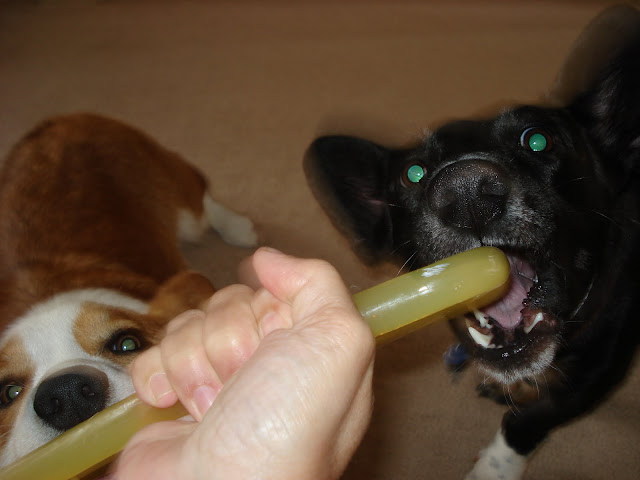 “When Joni began playing with our eleven month-old Mitchell right away, we knew we’d found our forever dog.” 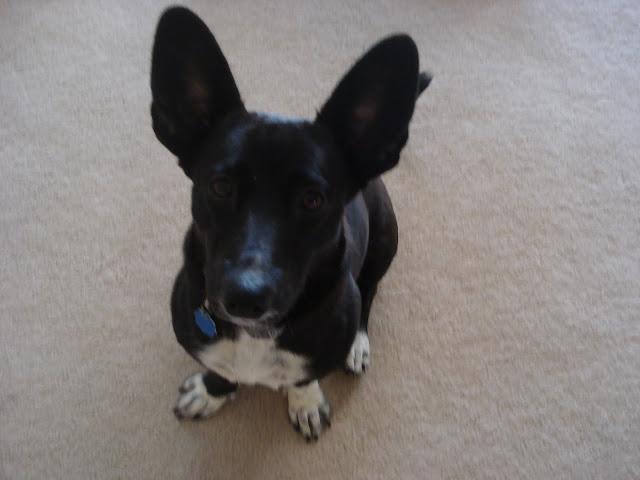 “When she first came home, Joni scarfed her food down in twenty seconds, but after a month she began taking her time, even leaving a few kibbles in her bowl. I guess she realized she could count on it.” 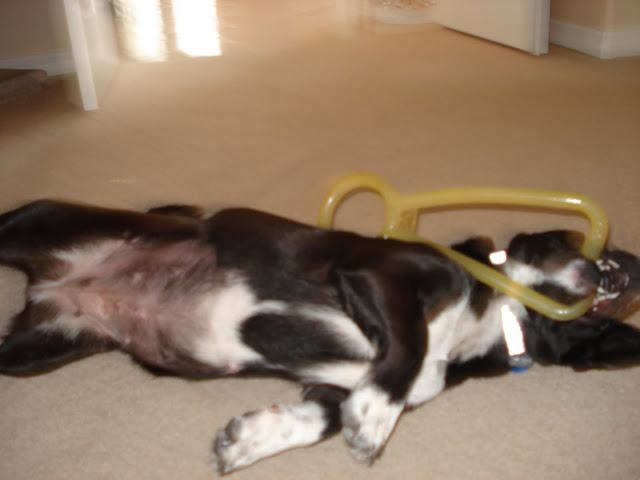 “Joni is SOOOOO amazing. She has a great personality, she speaks (Aoooooo!) when she’s happy, and shows how appreciative she is of her new home.” 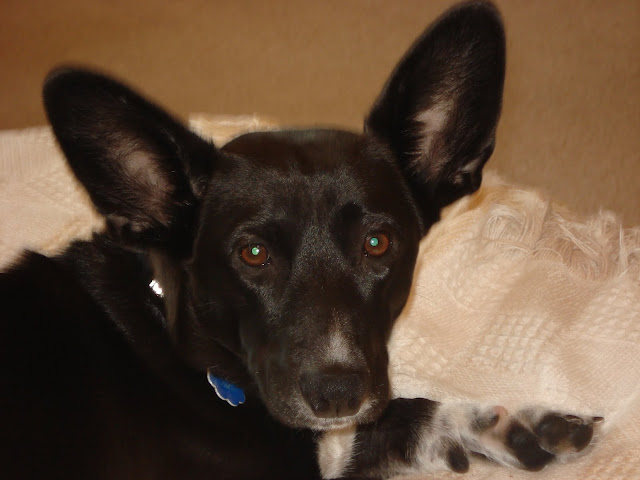 “Funny things about Joni:  She neighs like a horse when she’s happy.  She throws her toys straight up in the air and chases after them, and she tumbles around with Mitchell like she’s a puppy.” 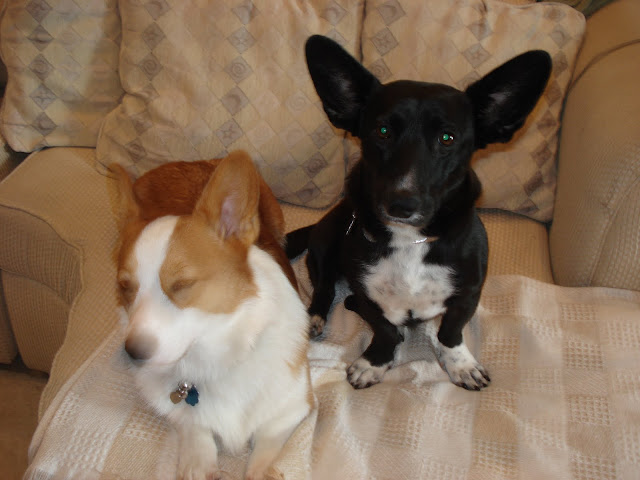 “Clever Mitchell knows how to use Joni to get exactly what he wants without having to do the work himself.” 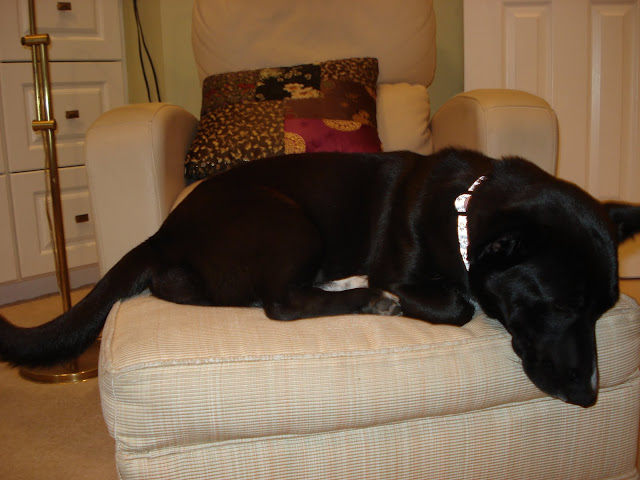 “Joni is sweetness personified. I don’t know what happened to her during the first few years of her life, but I am just glad that we finally found each other.”
*  *  *  *  *
Welcome to The Daily Corgi, Joni and Mitchell!
You’re a paw-some twosome!

Ten year old Frankie stakes out his favorite spot on the couch. Flooftastic.   Jasper still looks a lot like a puppy, but he ... END_OF_DOCUMENT_TOKEN_TO_BE_REPLACED