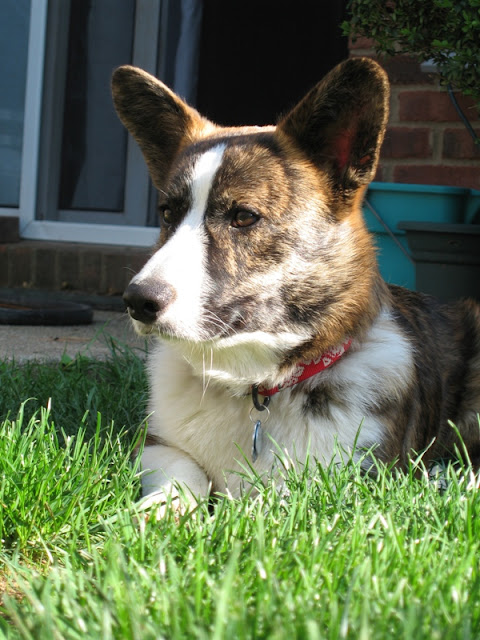 Mom Merinda T. had owned two Pems prior to switching to the “tailed” side. 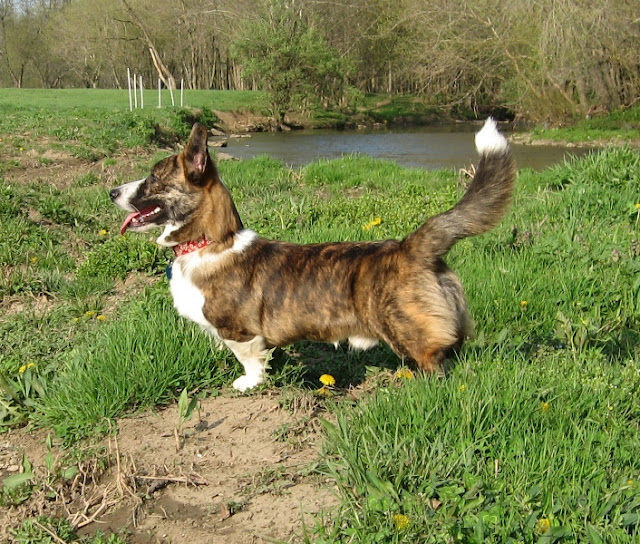 “I loved the Pembrokes but wanted to try a new breed, and couldn’t stray from the Corgi family!” 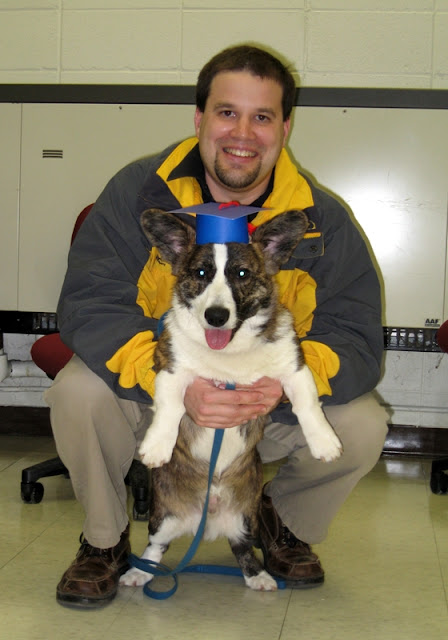 “Once he’d graduated from puppy obedience, Porter made his way through the next level class … 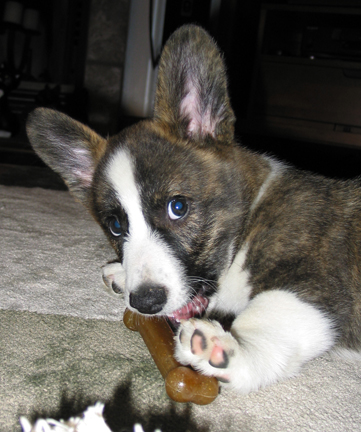 … then promptly flunked Level 2.  He just enjoyed sniffing the butts of the dogs heeling in front of him too much!” 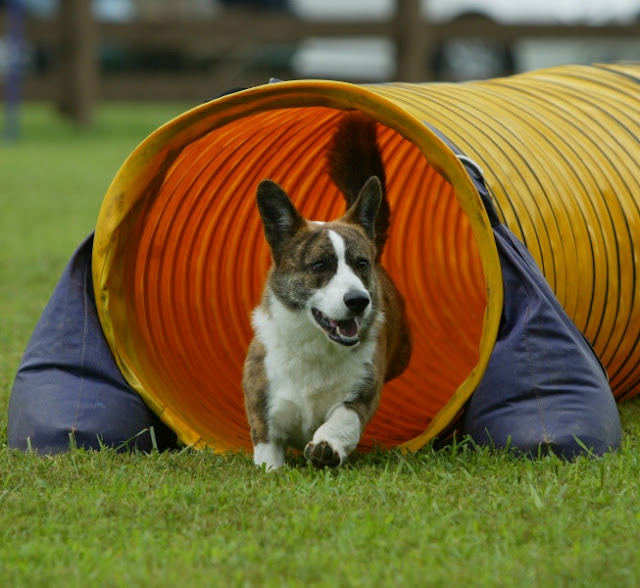 “So we moved on to agility classes!” 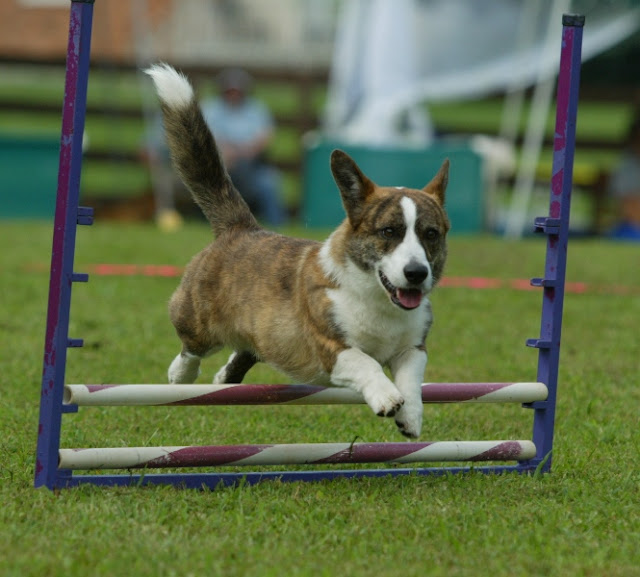 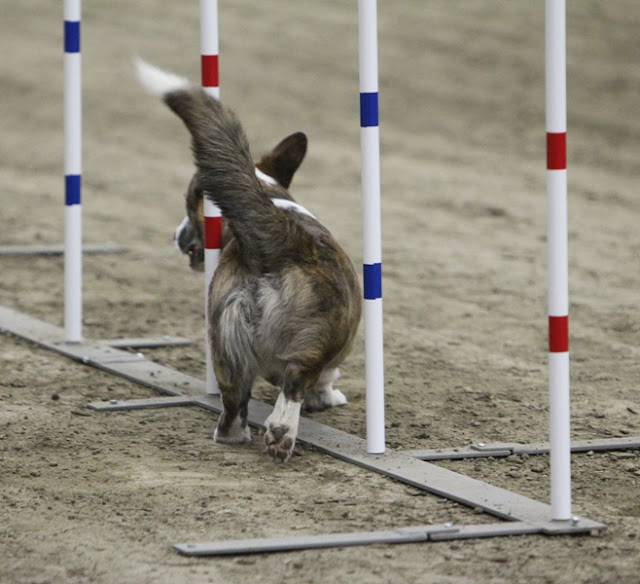 … not just the weave poles.”
He has his own youtube agility channel: http://www.youtube.com/merinda76
“In early January 2009, I was diagnosed with breast cancer. Porter was my constant companion through my chemo treatments, surgeries, and radiation. We continued to train and trial in agility, scheduling everything around my treatments.” 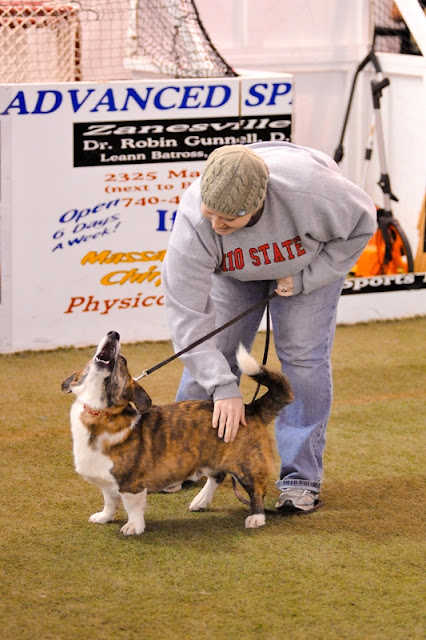 “I had a wonderful group of agility friends who offered to run Porter in trials, but I just couldn’t sit on the sidelines and watch. I wanted every title earned by Porter to be earned by both of us.” 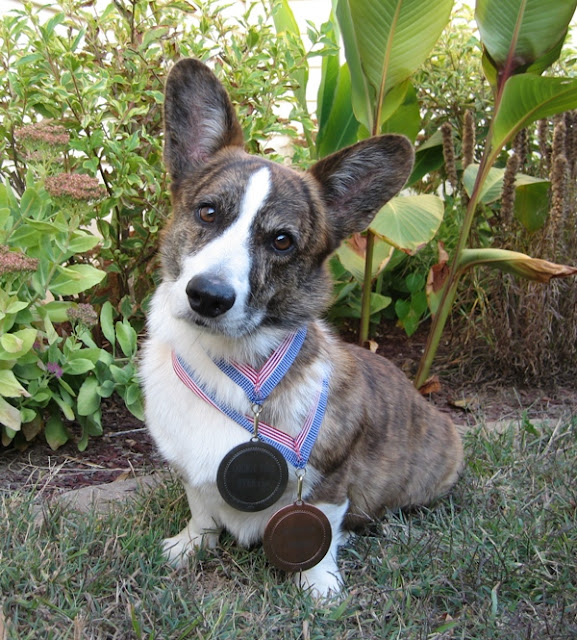 “We earned 15 titles that year, more than we’ve earned in any other year!  We even competed at the NADAC (North American Dog Agility Council) Championships!” 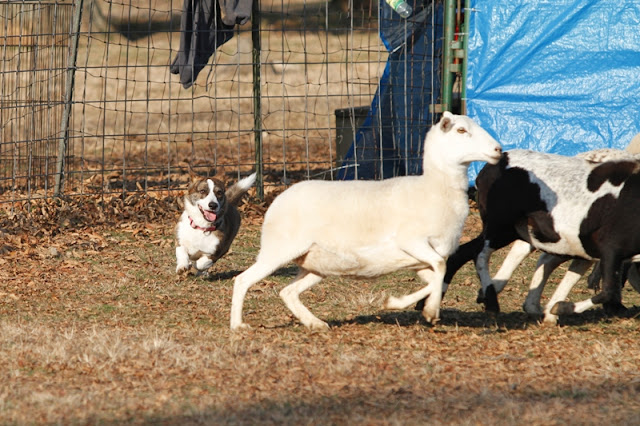 “We also competed in our first herding trials.” 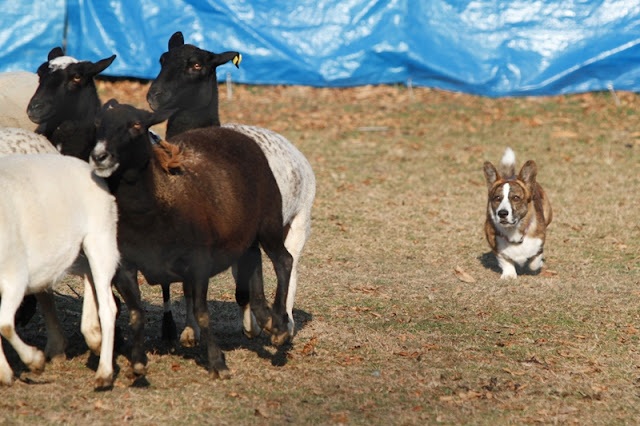 “Porter loves his sheep!”
“While he’s naturally gifted in this area, I struggle. A lot. It is by far the hardest thing I’ve ever attempted. Yes, even harder than all those chemo treatments!” 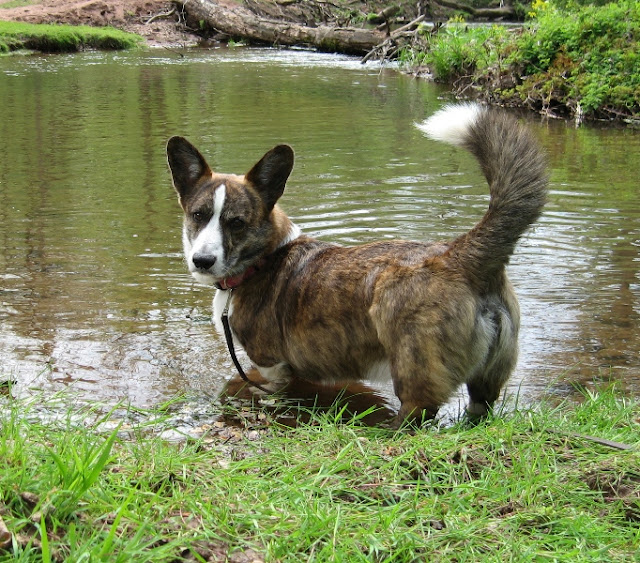 “Last year Porter made a brief foray into rally. He found it incredibly boring, but we earned our novice rally title, which also declares him a Versatile Cardigan by the Cardigan Welsh Corgi Club of America!” 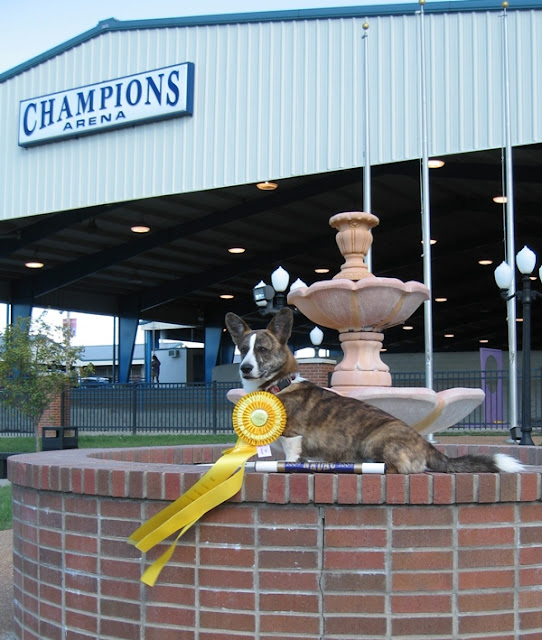 “As you read this, we will be competing at the Cardigan Welsh Corgi National Specialty in Houston. Porter will be herding sheep, running agility, and will make his debut in obedience!” 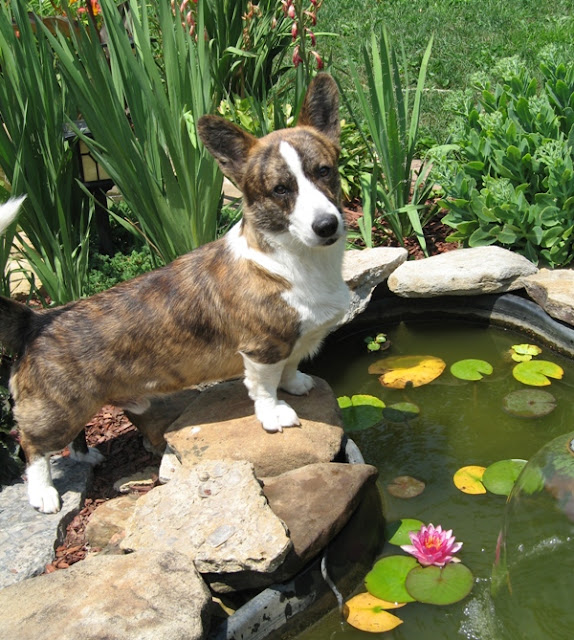 “He loves our goldfish ponds and will sit for hours watching the fish, occasionally biting the water to try and catch one.” 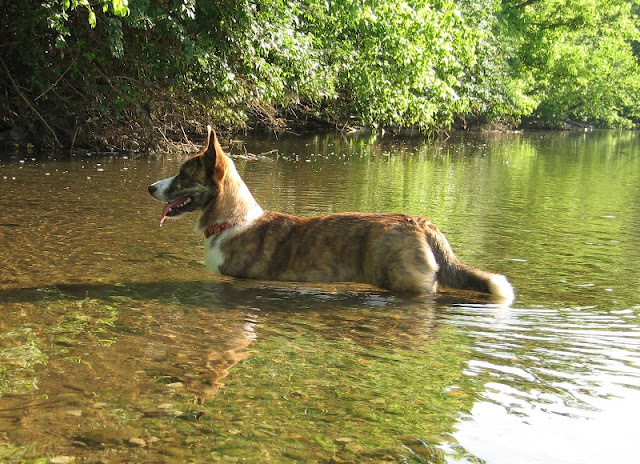 “He also loves to wade in the creek, chasing and pouncing on all the small minnows.” 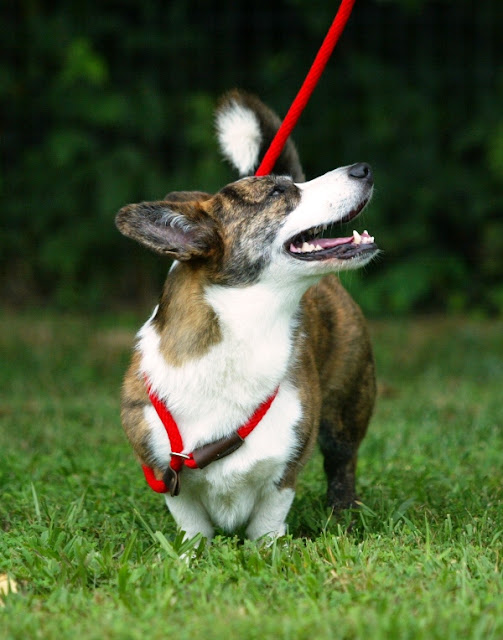 “We walk two miles every evening. He enjoys checking the local pee-mail and chasing various rodents.  Porter’s favorite foods are pizza crusts and broccoli bones (the large stem of the broccoli bunches).”
“Porter is the former “Cookie-Toss” gold medal winner at the Canine Olympics in our area. He caught (and ate!) over 20 cookies in 30 seconds, beating even the Labradors!” 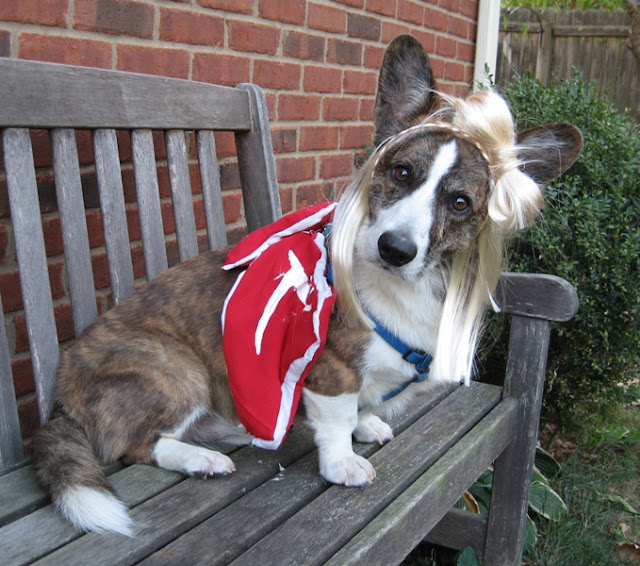 “He also won the bronze medal in the costume contest: he was Corgi Gaga.” 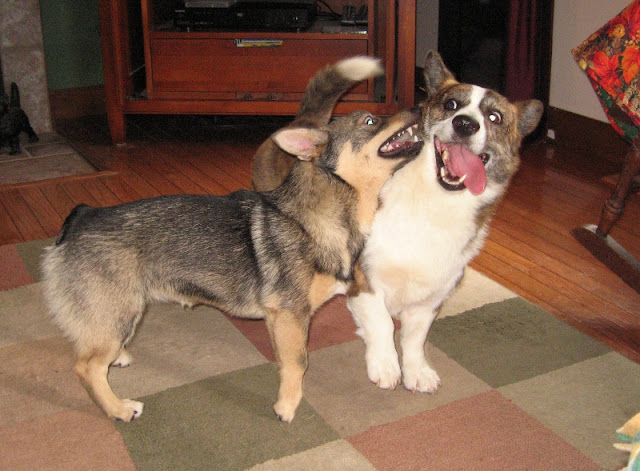 “His best friends are Dally the Pembroke and Mesa the Swedish Vallhund. Mesa is the only puppy he has ever liked, and is still one of the few dogs he will play with.” 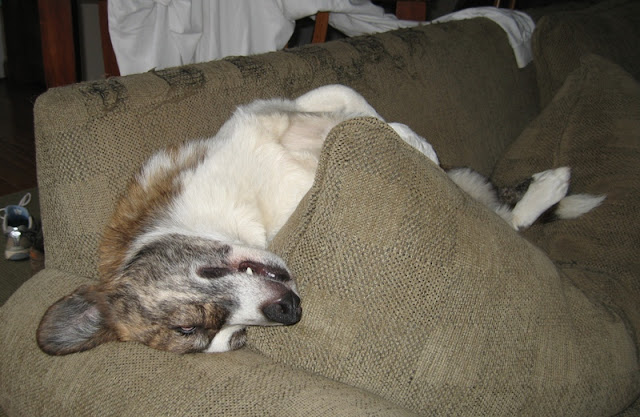 “Porter goes to “work” once a week (actually doggie daycare, but he takes on the role of boss of the other dogs). This may be the only thing that actually tires him out; he passes out on the couch for the next 24 hours!” 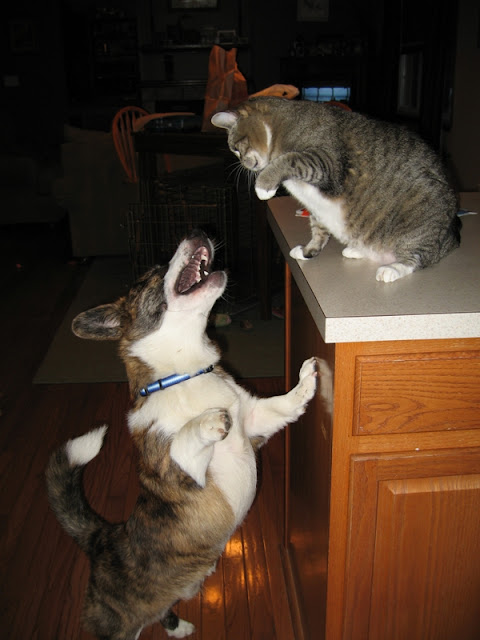 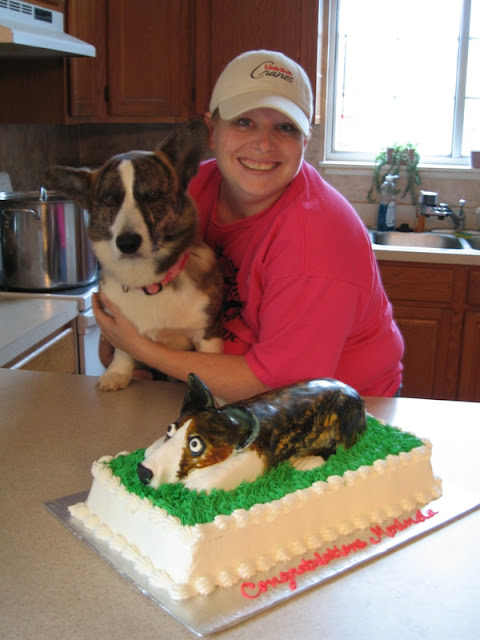 Together we are a team!

Porter and Merinda for the win!

Ten year old Frankie stakes out his favorite spot on the couch. Flooftastic.   Jasper still looks a lot like a puppy, but he ... END_OF_DOCUMENT_TOKEN_TO_BE_REPLACED