Three very special Pembroke Welsh Corgis have brightened the lives of Jane and Don R.  This is their story.
“You hear so much about puppy mills and the sickly puppies they often produce. But how often do you hear about the adults left behind for years, generating those puppies? 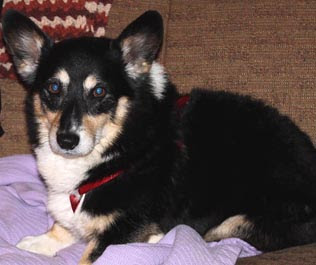 Even as an animal activist, I didn’t think much about them … until I saw Arlo. He was called Joe then; I suppose he was only a number before the rescue named him. He came from a puppy mill in Iowa that was voluntarily reducing its numbers. I found him online in Ohio and brought him to Pennsylvania last Fall. 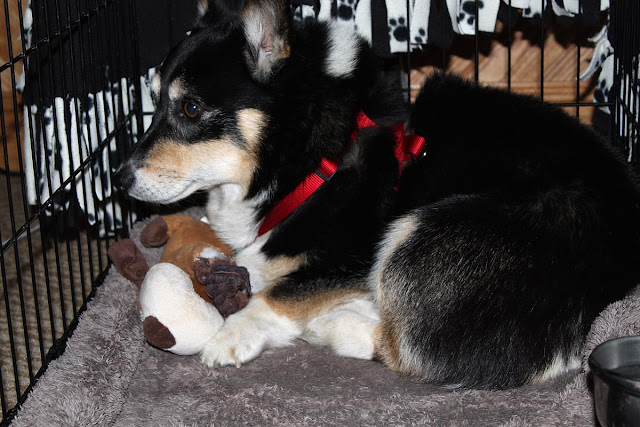 Their best guess was that he was six years and a few months old. He was on the thin side, his coat was dull, and he had very bad teeth, but was already neutered and seemed to be healthy otherwise.
I had actually gone to the Corgi rescue to see his buddy, Julie. But Julie was still extremely shy, and he seemed to be a bit more ready to “get a life.” Just as important, he also looked nothing like Zip, our red and white Corgi who’d gone to the Bridge almost three months before.
So Joe came to live with me, my husband, and Violet, our then-13-year-old Corgi/Beagle mix. His new life as Arlo, a house dog, began. 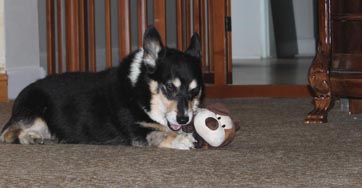 Everyone remarks on Arlo’s beauty; this black-headed tri-color was the perfect choice for creating cute puppies.  He loves mirrors. We don’t know whether he thinks it’s another dog, or that he thinks he’s handsome! We think he is, too.
Arlo doesn’t have a mean bone in his body. You can do anything with him, but you have to catch him first. He likes neck rubs, but as soon as you stop rubbing, he’s gone. 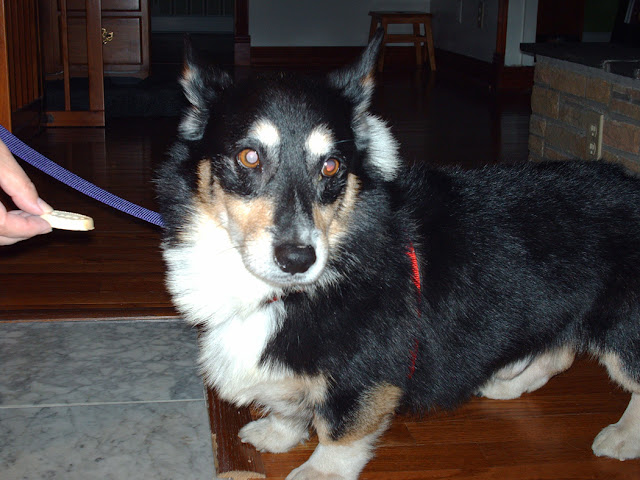 It took weeks for him to give us any eye contact. I’ve had dogs all my life, yet I sorely underestimated the time it would take to … what? … make him a real dog? At first, when we walked him, he moved straight ahead, looking neither right nor left, not stopping to sniff, plowing through puddles as though he had no other choice.
He’s much more interested in his surroundings now, but we’ve yet to see his Corgi butt-wiggle. He feels very safe in his cage, and we are working on him to feel comfortable with us. He still runs away most of the time when we reach out to pet him, but now he doesn’t run as fast or as far. Once in a great while, he will suddenly romp for a few steps, then stop as if he’s afraid of getting in trouble. 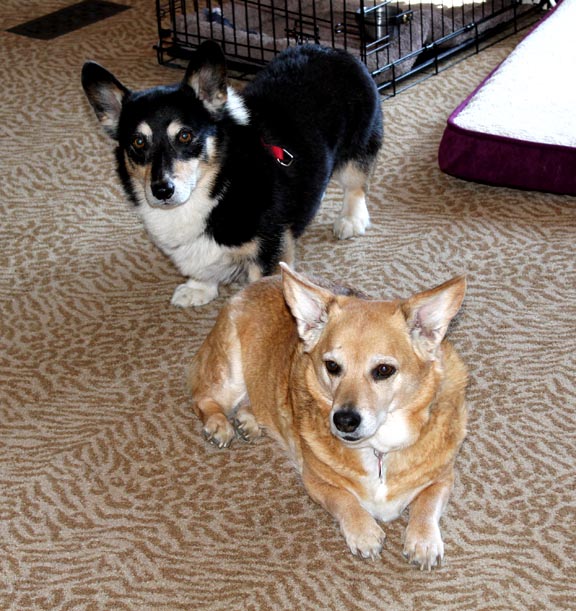 A few lessons with a trainer, with more to come, have helped him settle in a bit, but he is still a skittish, insecure, sad piece of now-beautiful fur. Still, we have hope that he will someday trust us, and realize he is in his forever home where no one will ever hurt him. 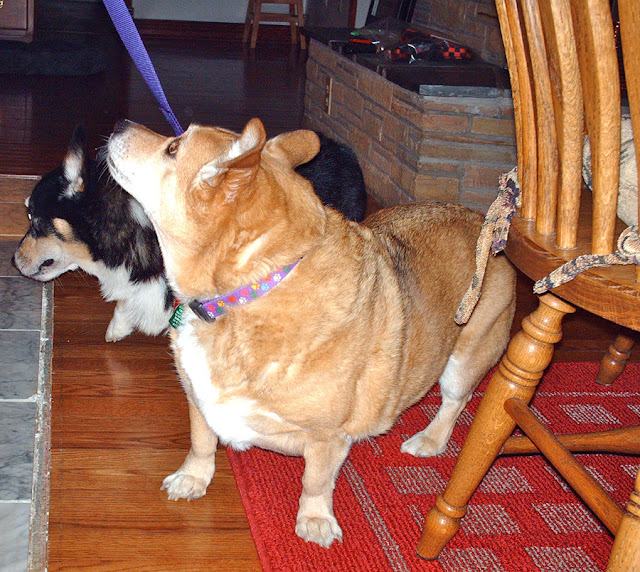 Violet came to us as an eight week-old when I went with a friend to “look at” some free Corgi/Beagle pups advertised in our small-town Ohio newspaper. Mom was a purebred red and white, but Dad was the Beagle down the road. Most of the litter had been born on Christmas Eve. 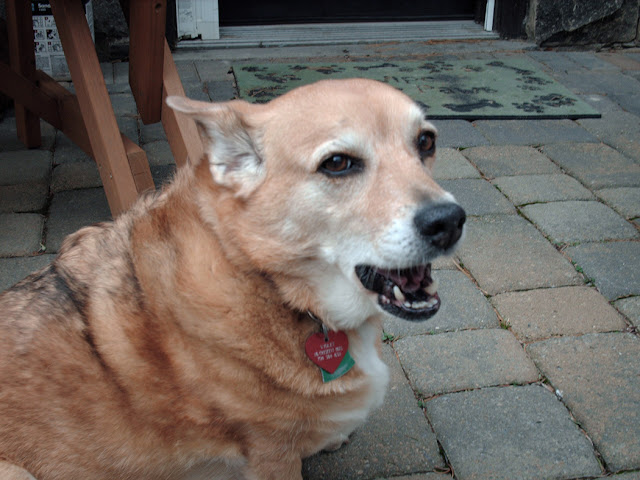 Some of the pups looked just like Beagles; a few looked like their mom. All had their tails docked, which looked very odd on the Beagle types. But MY pup stood out from the rest. Her zest for life was apparent when she burst away from the group, zooming once around the big house on the country road “just because.” I watched with alarm and amazement, but she soon returned, still at top speed. She looked the most like her mom, her huge brown eyes were gorgeous, and now she was mine.
Who cared what my husband said? 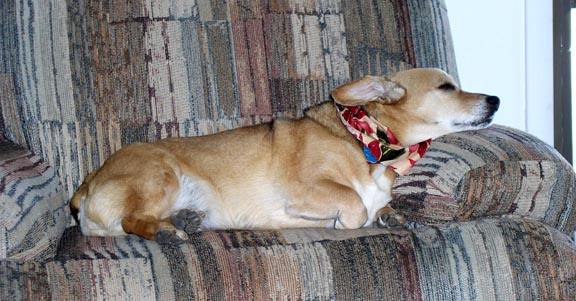 It was rough going at first, but soon, my very-surprised-and-irritated husband was head over heels in love with her — after swearing he wasn’t going to pet “it.” Almost immediately, she became his dog. (Tara, our 16-year-old Beagle mix, never did warm up to her.) 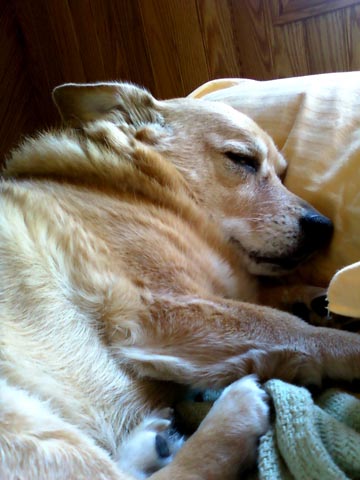 Violet is now queen of the household and loudly orders us around, when she isn’t giving silent, intense, meaningful looks that communicate just as well exactly what she wants. Now 14, she’s not crazy about Arlo, but she accepts him.
She is very smart and knows sit, lie down, dance, “Bang!” (drop dead), roll over, and “Wounded Lassie.” 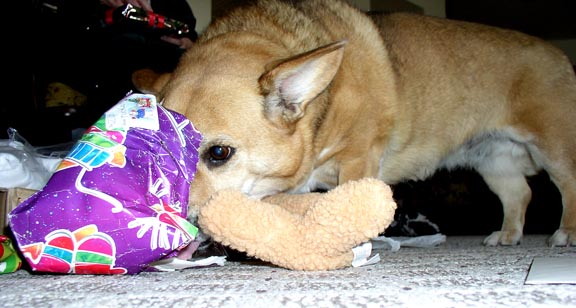 When she was two we found out Violet had hip dysplasia. Cha-ching. When she was four, she blew out her rear knee. Cha-ching again. A few years later, the other rear knee went out. Fortunately, we can afford this Six Million Dollar Dog. 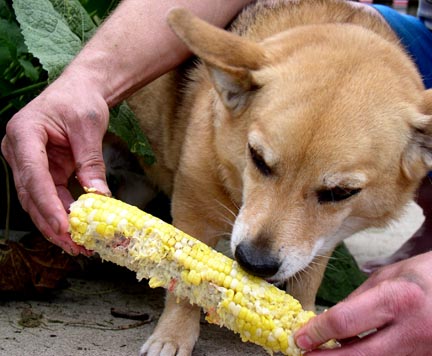 She is full of energy and character, and of course is worth many times her weight in gold. My husband and I are putty in her paws. Zip. What a boy — our first Corgi. He came to us from a horse boarding farm in Kentucky, where he competed for attention not only with the horses, but with two other dogs and three children under age three. He was lost in the shuffle, and I couldn’t resist.
Here was the Corgi I’d aways wanted: red and white, just like the Queen’s! At almost three years old, he was just a few months younger than Violet. I had to have him. For over a month, I talked to my husband. Finally, Zip came to Ohio to live with us. 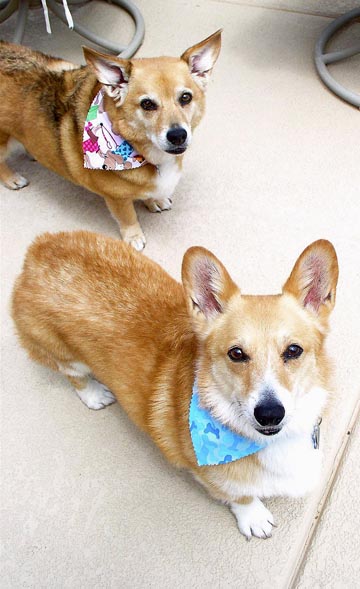 Our sweet boy was very, very quiet, and exquisitely well-behaved. He didn’t bark for the first week, but he made up for it later.  Early on, he heeled so close to my ankles that he’d trip me, and there was never a doubt in his mind that “come” meant “come” — right now. We’d never had a dog so well-mannered! 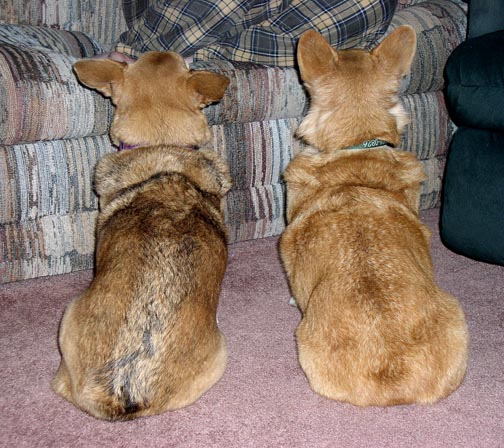 Violet soon taught him he didn’t have to be quite so obedient in this household, but Zip was a follower. He wanted to be with us, and with her. If she barked and ran, he joined in, long before he knew what he was barking and running about. 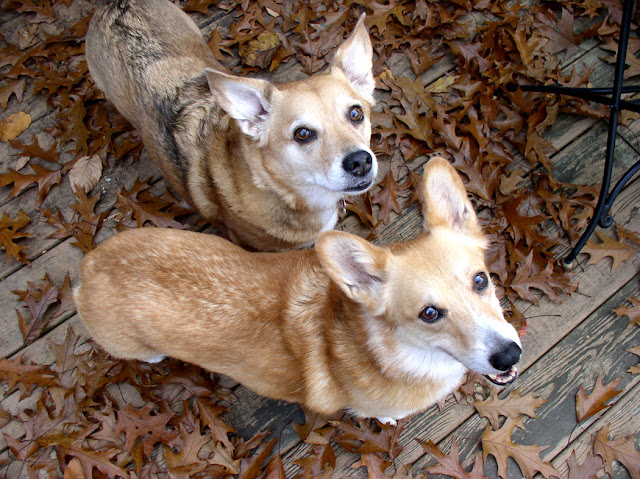 Our favorite memory of Zip took place at a large park. He and Violet had immediately become playmates, so one day, we took them to the park and let them run. Violet followed my husband, and Zip followed me as we headed in opposite directions. Several times, the dogs traded places as he called one and I called the other. However, the final time they decided to play “chicken.” Don and I watched in amazement as they closed in on one another, neither veering from the path. Suddenly, we heard a loud “clunk!” Violet yelped as they collided head-on, and immediately dropped to the ground; Zip staggered a bit, but stayed upright. They were both fine, but it was time to go home! 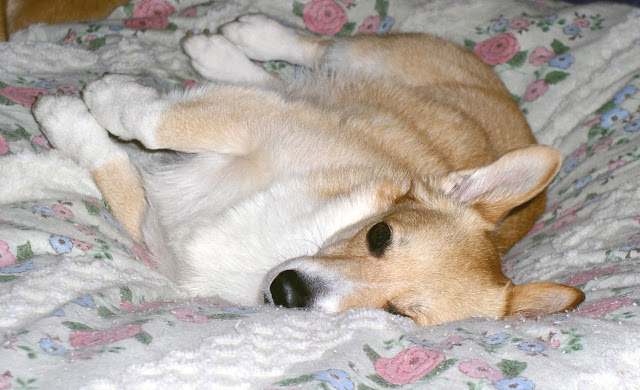 Even though they weighed almost the same, Zip outmuscled Violet by far, and could pin her with one paw. But he only did that once, and probably by accident. He let her win every other wrestling match, and they raced through the house, round and round, having a ball and making us laugh. 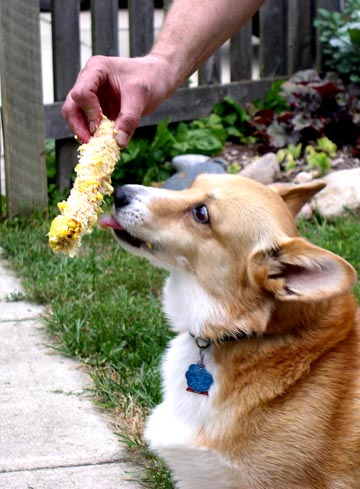 In later years, they slowed down and Zip wanted to play less frequently, but he remained ever-curious and made sure to keep up with every movement in the household. While Violet would snooze, Zip would follow my every move, and investigate every sound. He was so much company … 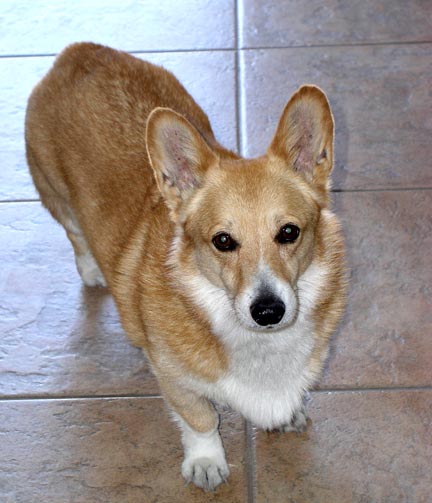 It was so hard to let him go last August first, but we had to.  Although our Mama’s Boy had cancer and kidney failure, he was full of life and inquisitiveness almost to the end.  Zip journeyed from Kansas to Kentucky, to Ohio, to Michigan, to Nevada, to Pennsylvania, and finally, to the Bridge.
He was our sweet boy to the last.”

Welcome to The Daily Corgi, Arlo, Violet and Zip!

Ten year old Frankie stakes out his favorite spot on the couch. Flooftastic.   Jasper still looks a lot like a puppy, but he ... END_OF_DOCUMENT_TOKEN_TO_BE_REPLACED