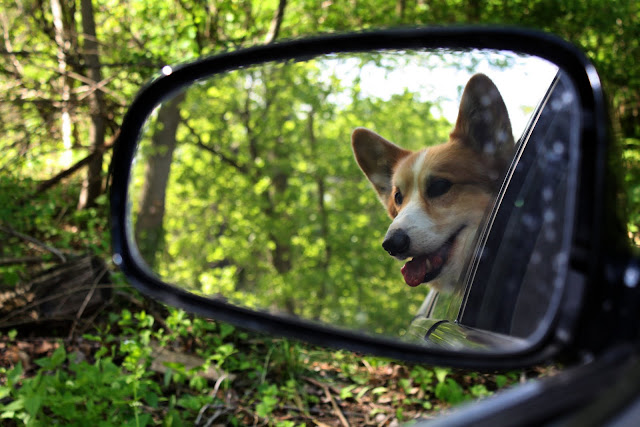 Dad, go back!  We just passed a golden arches! 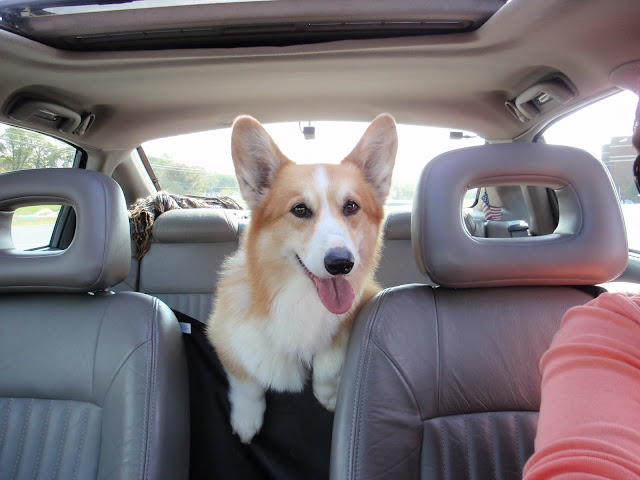 “The best day for him was the first time he visited the drive-thru at McDonald’s.” 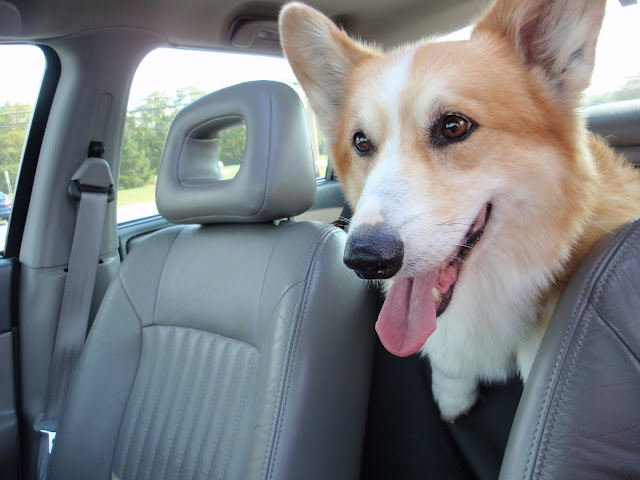 “Leave the ordering to me, Mom.  They know me here.” 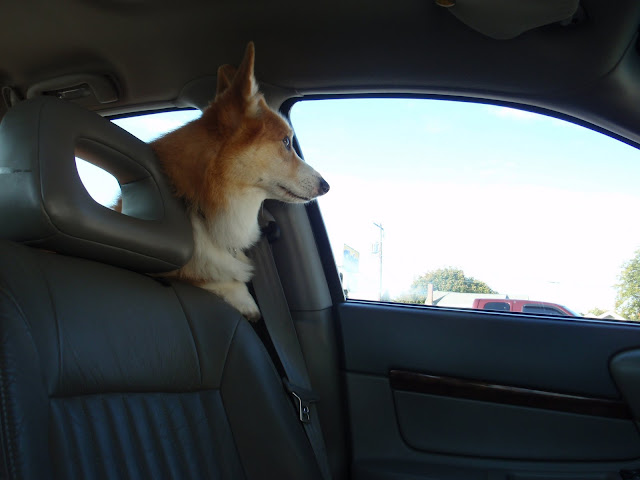 “On car trips he was always alert to the turn signal and would stand so he could see where we were going.  We always joked that Freddie needed to know how to get home if we forgot the way.” 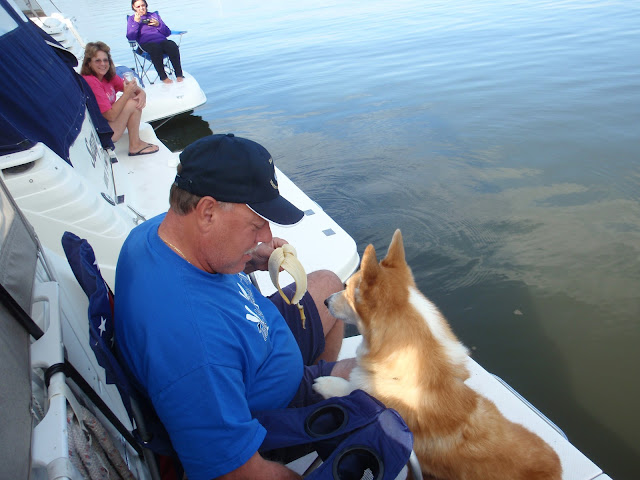 “Freddie enjoyed bananas immensely.  Our boating friend Bill would always have a banana for him in the mornings.” 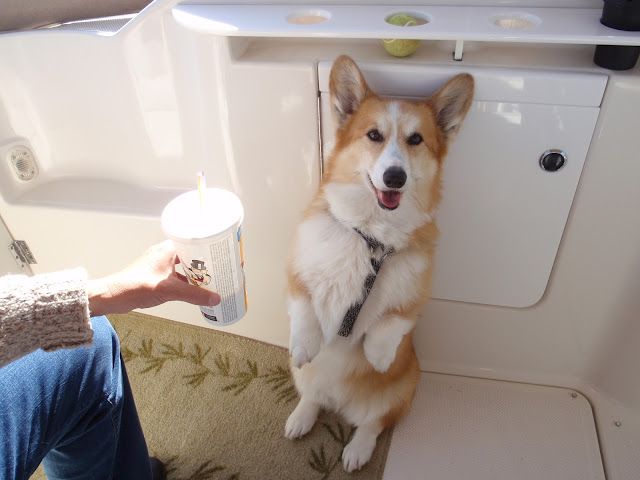 “He’d do anything for a treat.”﻿
“Fred would wait and watch for Bill (known far and wide in Corgi Nation as “Banana Bill”), and quivered from head to toe when he saw Bill coming with the banana.” 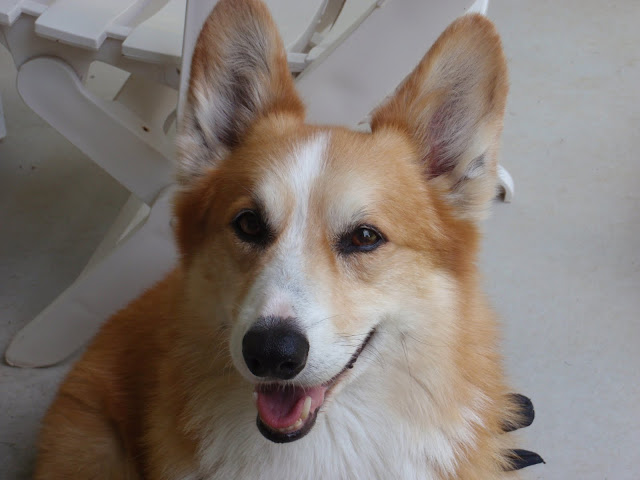 Freddie Bumbles came to live with Liz and Steve M. and their two kids when he was four months-old.

“He had the biggest ears we’d ever seen. On the day we brought him home he sat up in the cage for the entire hour-long trip.” 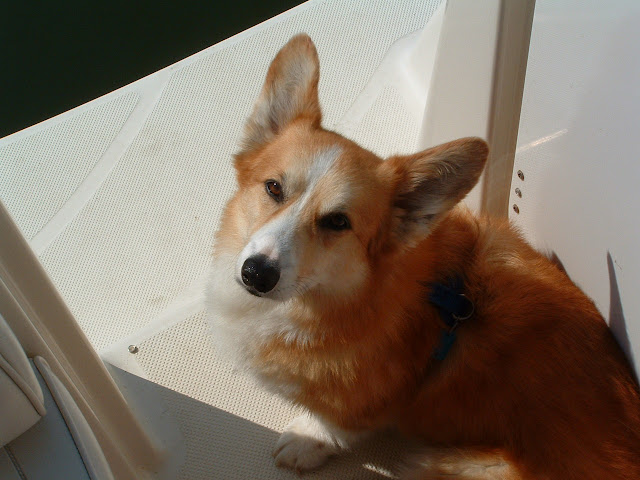 “Fred was our second Corgi.” 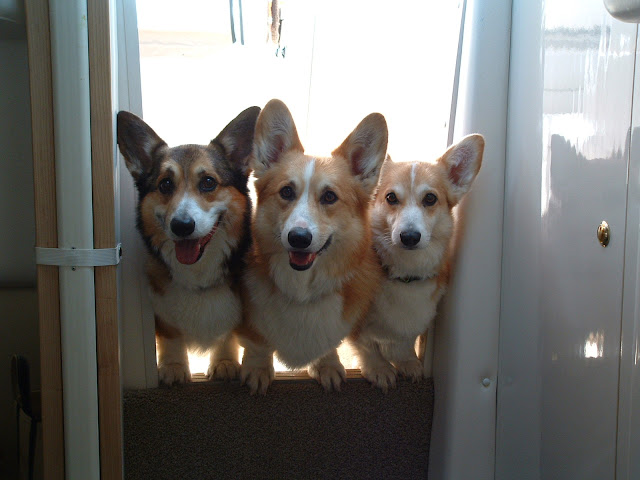 “We got him to keep our JJ company, and added Lily Dawgins a few years later.” 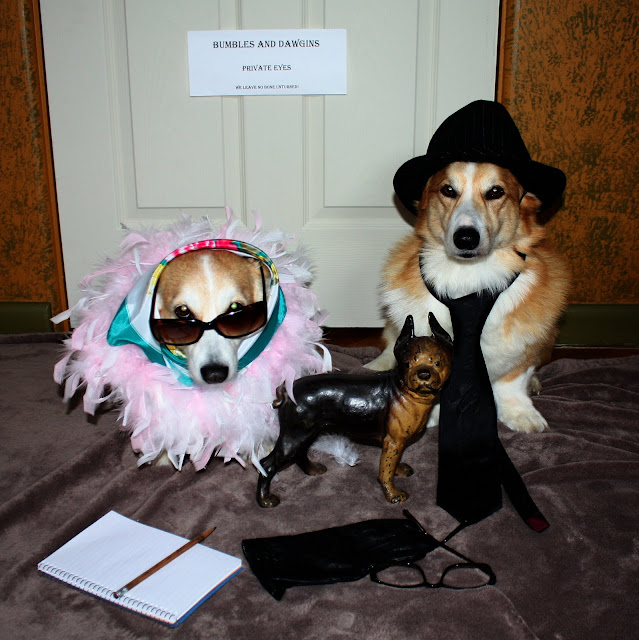 Bumbles and Dawgins, P.I.s for hire. 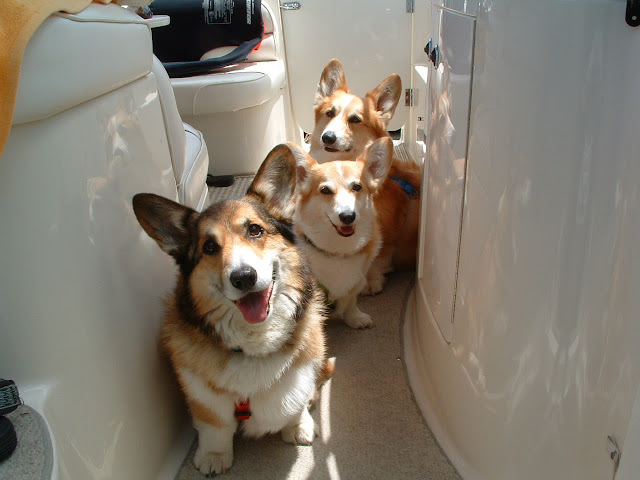 “For the next five years we had three wonderful Corgis who turned heads wherever they went. They all loved to go on walks, car rides, and best of all, boating trips.” 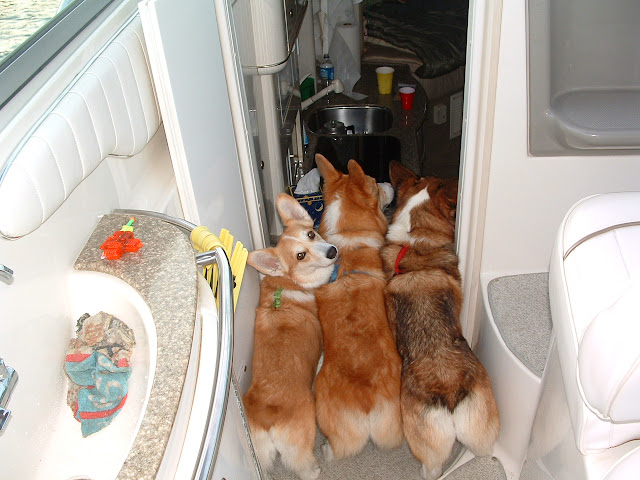 The three Buttsketeers!
“They would curl up at Steve’s feet when he was driving the boat. It was like a living rug.” 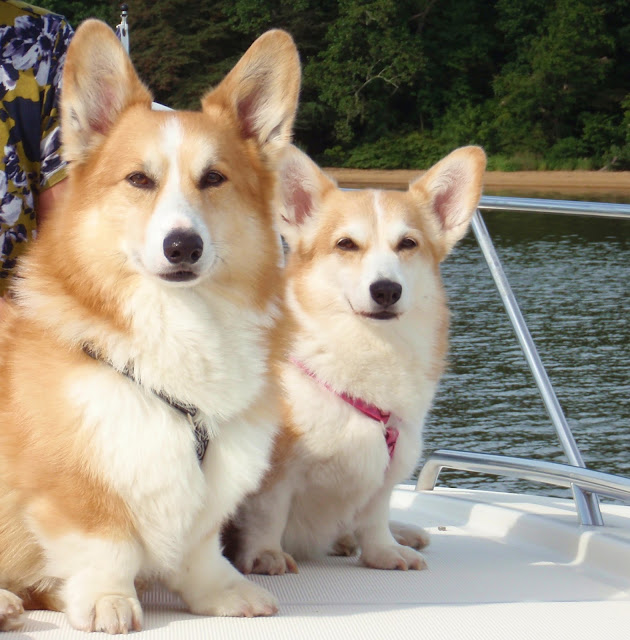 With Lily Dawgins:  Corgis ahoy!
“Fred wasn’t crazy about swimming unless I went under water. Then he felt like he had to find me. He’d also swim if we threw a ball for him to fetch.” 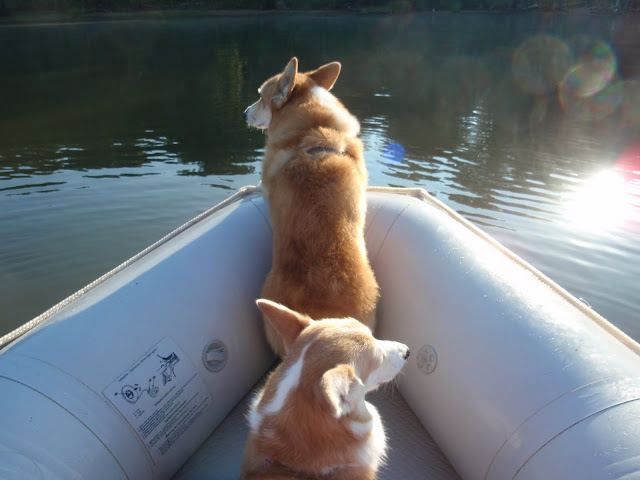 Riding to shore in the dingy. 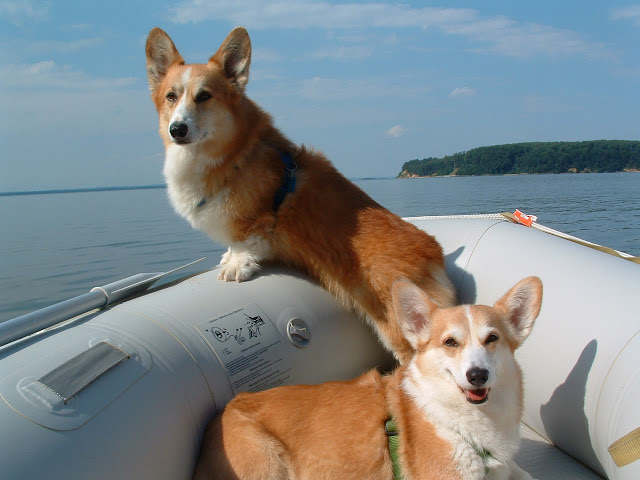 “He always had to be in the front, usually hanging over the edge and nearly falling in.” 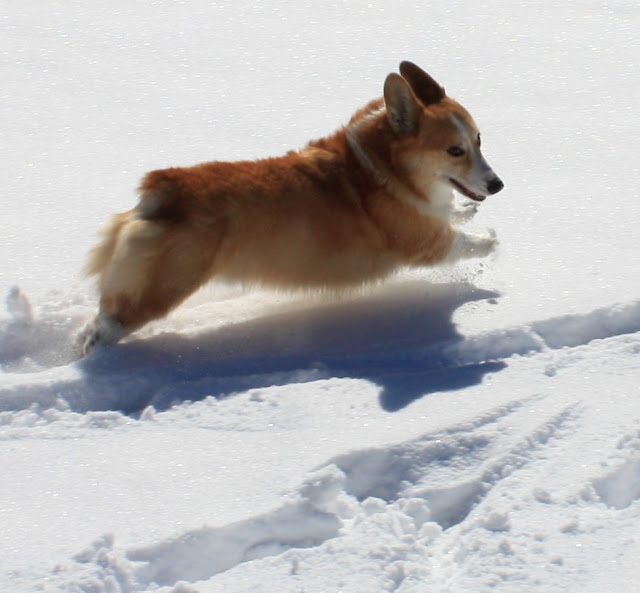 “Freddie Bumbles was the clown and eternal puppy of the three, with a great sense of excitement and adventure.  On walks he always had to be out front leading the way.” 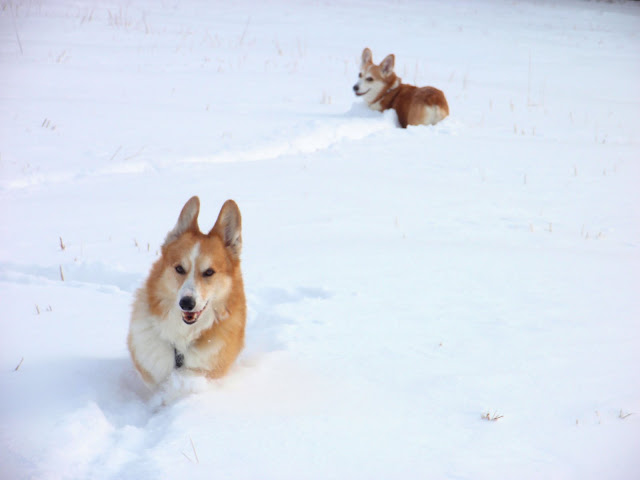 “He was going to lead, even if he didn’t know where we were going.” 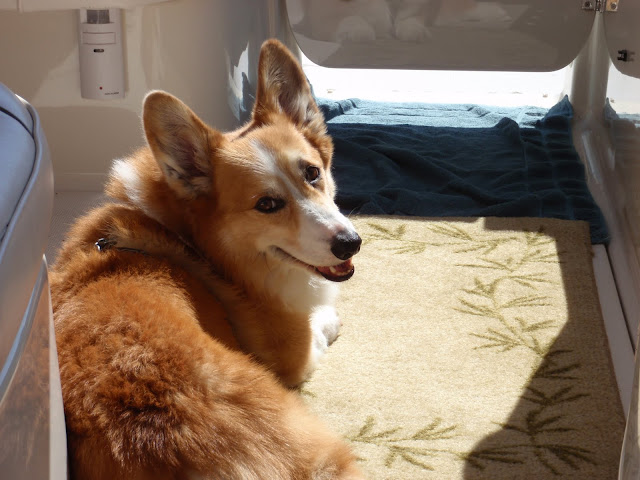 “He had a sweet nature and never met a person he didn’t love immediately.” 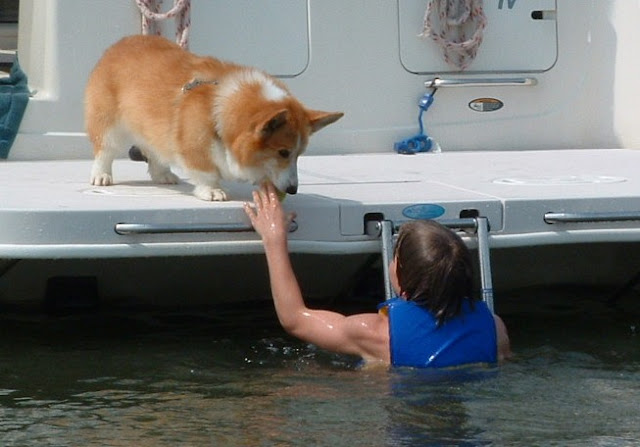 “Boating was great with him because he loved meeting and greeting everyone.” 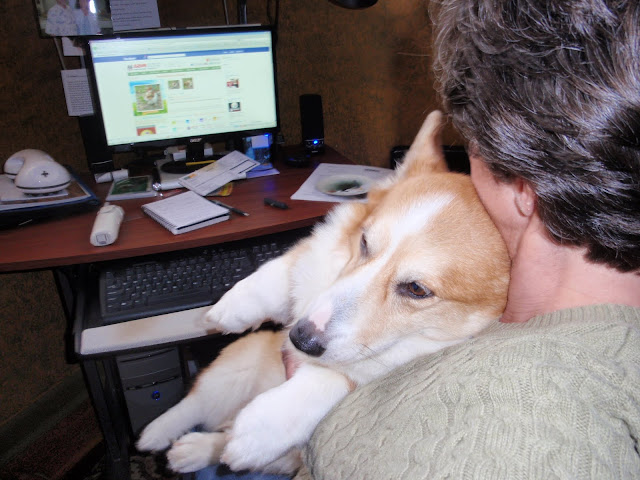 “Fred loved to snuggle. He would become totally floppy and flexible so you could mold him to any shape and he’d be happy.” 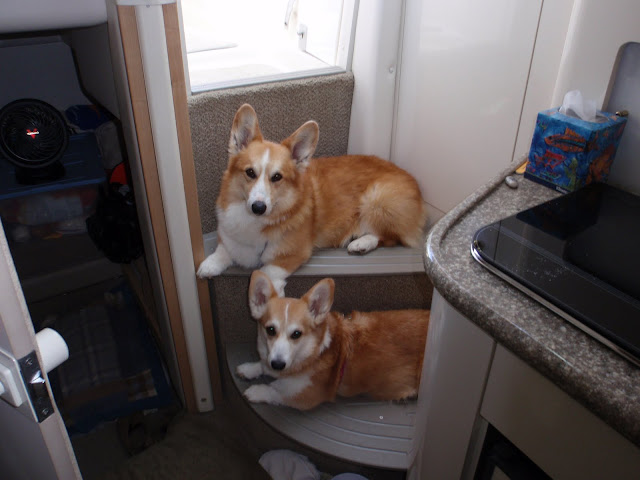 “He liked to lie with his tummy on the cool tiles with his legs stretched out behind him, Corgi style. I always called him Freddy Bearskin Rug when he did that, since he looked like a living teddy bear.” 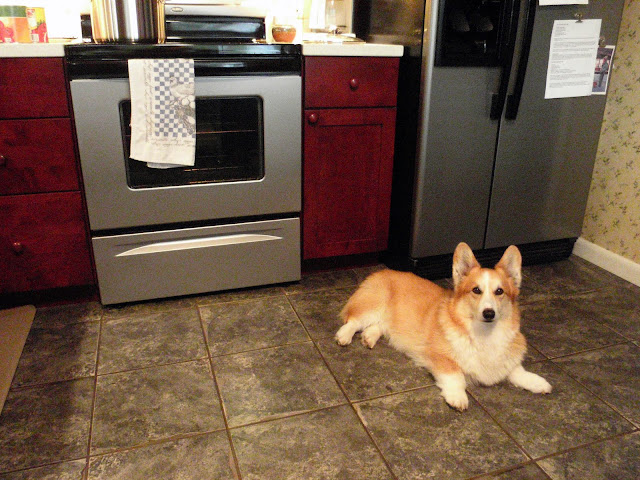 “He loved being with us and “snoopervising” all activities.  His best snoopervising was in the kitchen, where he always made sure any dropped food was disposed of properly.” 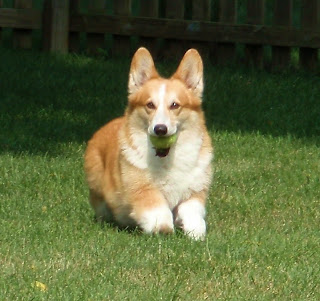 “Our boy loved playing ball. He and JJ would turn it into a full contact sport.”

“Together they would bark wildly at the leaf blower or any other thing with a pull motor. The vacuum cleaner was also subject to attack.” 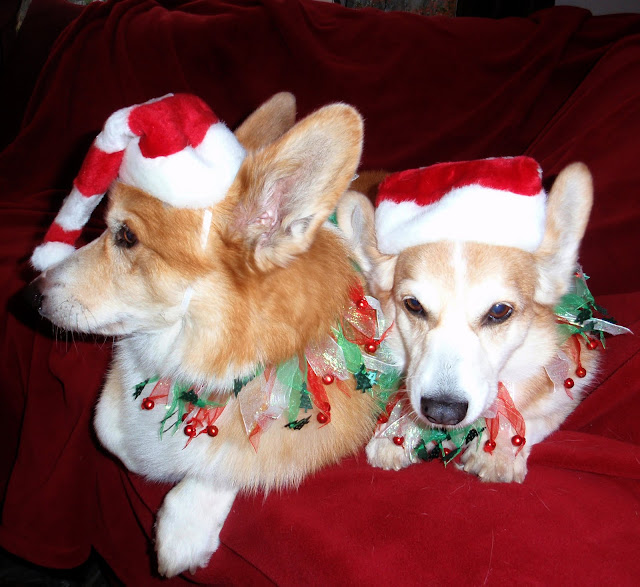 “Freddie patiently tolerated me taking pictures of him in holiday settings.” 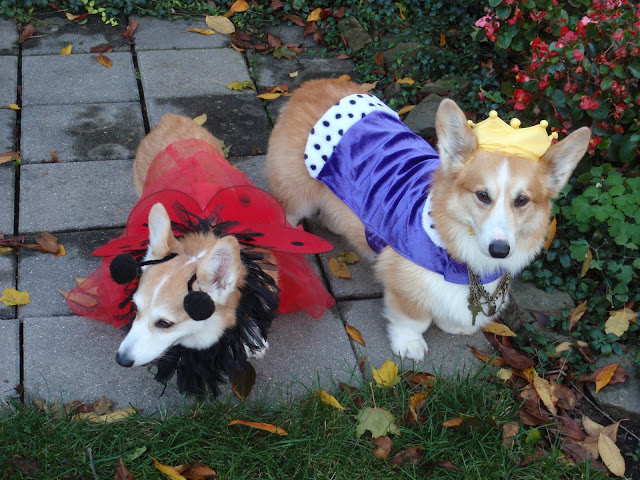 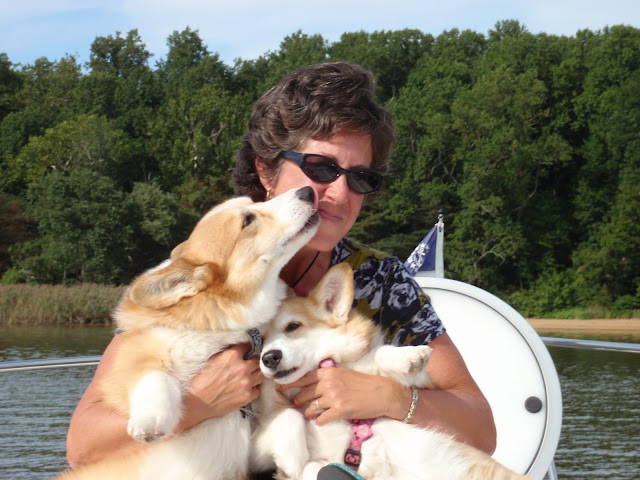 “When he was young I hoped he would remain like the pup he was, and he did. Freddie Bumbles never lost that endearing quality of carefree happiness that puppies have.” 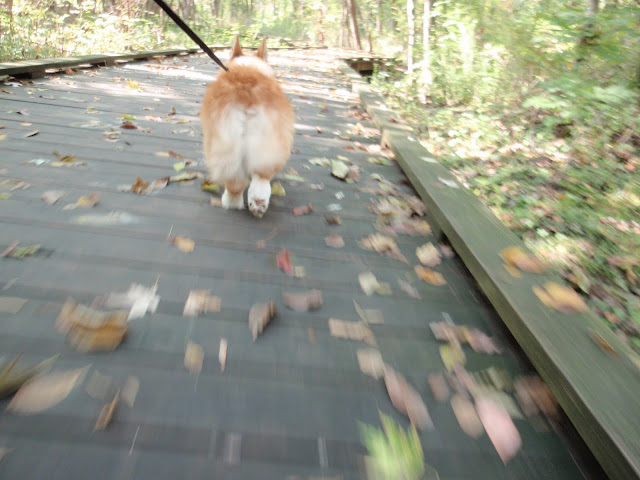 “He was one of a kind and will be missed forever.”

Ten year old Frankie stakes out his favorite spot on the couch. Flooftastic.   Jasper still looks a lot like a puppy, but he ... END_OF_DOCUMENT_TOKEN_TO_BE_REPLACED