In recent days, The Daily Corgi has been following Baxter’s story of kicking cancer in the pants (go Bax, GO!), and the incredible rally of the Corgi community — led by CorgiPals —  to help him and his Mom Anitra Frances. 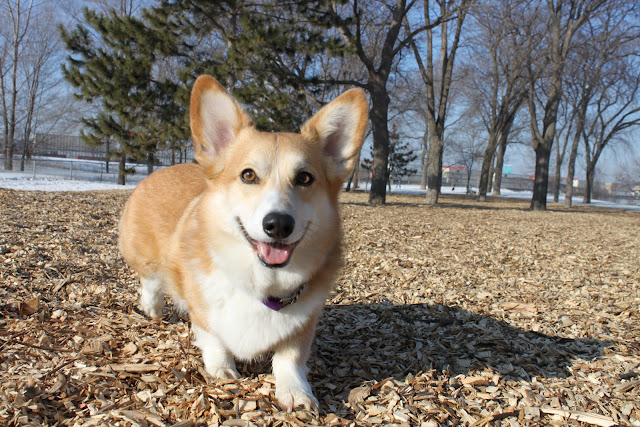 Today on the blog, Anitra tells us all about Baxter, in her own words and pictures.  It’s a bittersweet story, because Baxter is facing an uphill battle with prostate cancer.
In keeping with the indomitable canine spirit of living life in the here and now — or in the case of Corgis, the hope of food within the next two minutes — I hope you’ll join me in following Baxter’s story, and in supporting his folks Anitra and Bryan through whatever lies ahead.
They are giving, generous people who’ve graced the world with their open hearts and doors.
*  *  *  *  *
“It all started about five years ago. I had a dog. Her name is Esther. She is a cowdog who rather preferred her life as an only child, with only a Mom.”
“Then along came this guy Bryan. And he didn’t go away.”
“Bryan had never had a dog before. Despite Esther’s lack of charm and charisma, he decided he’d like a puppy of our own. There’s another Corgi in our neighborhood, by the name of Merle.” 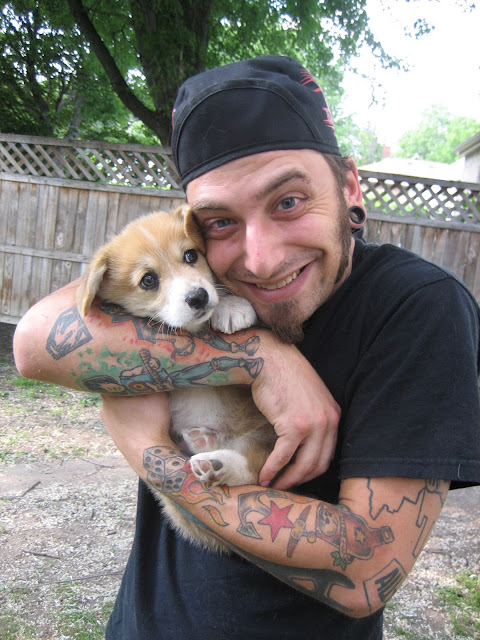 “Merle’s Dad and I got to talking, and before you know it, Baxter came along, Merle’s brother from another mother, and Bryan’s “firstborn”.” 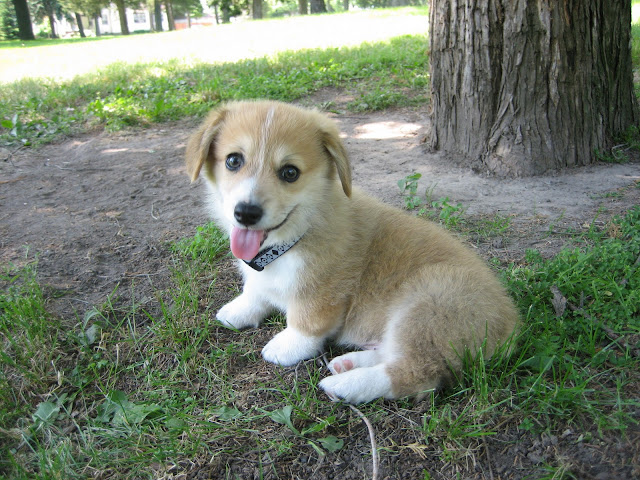 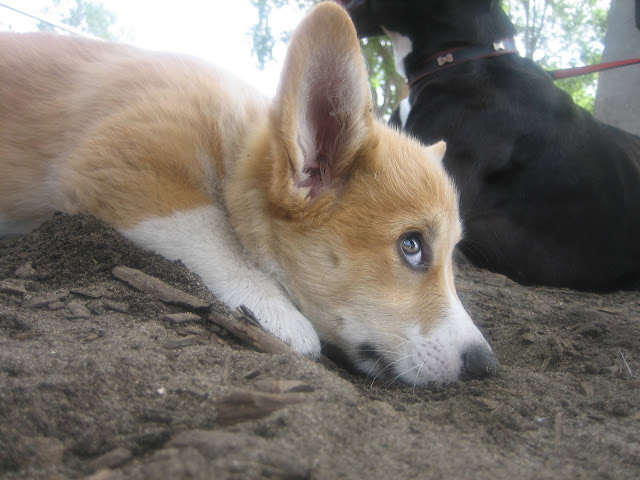 “There really is nothing cuter than a Corgi pup.” 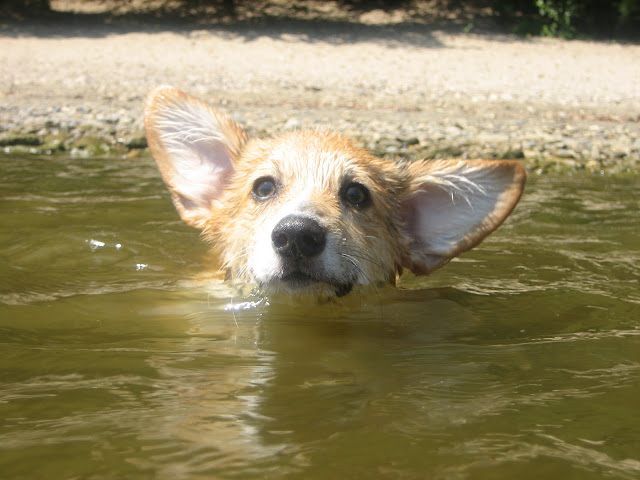 “He even liked his grumpy big sister!”
“Why stop at one? (I think we really did say that). We’d been thinking about getting a tri-color and researching a local breeder. We found a dog we wanted, but he wasn’t ready.  Lo and behold, another one would be ready on Bryan’s birthday!” 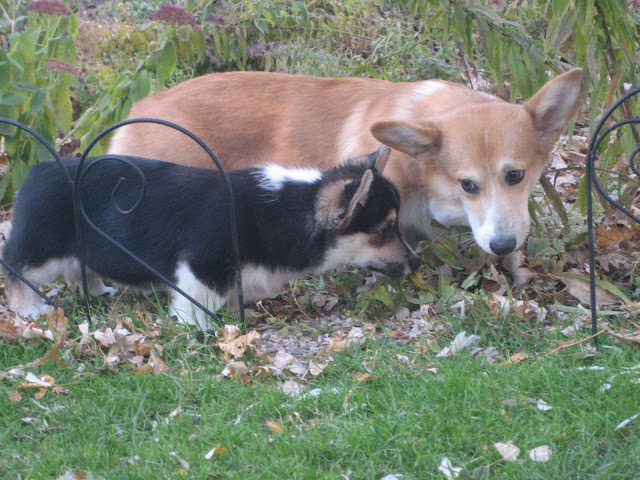 Showing the rookie around.
“It was fate. It was Alvin, destined from the start to be Baxter’s best buddy.”
“About a year later, we got Ingrid, a a blue merle Cardigan … 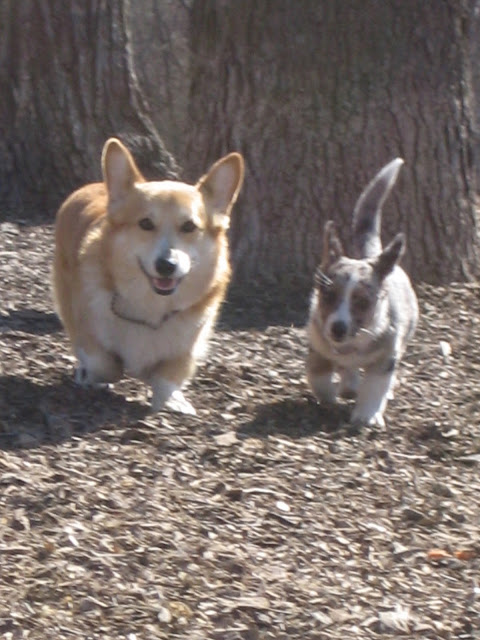 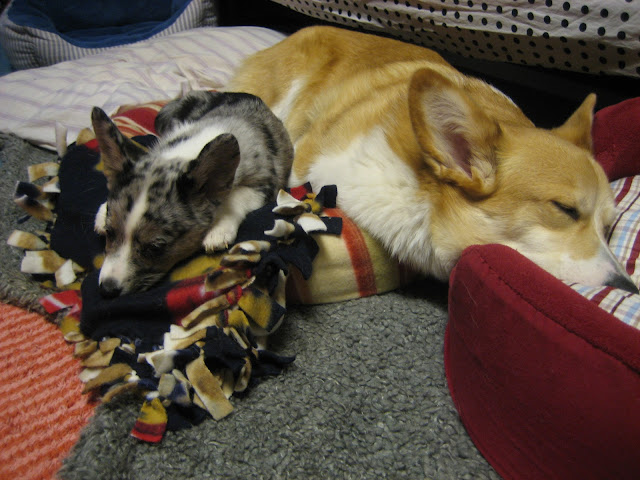 “Yes, Baxter really is this sweet.” 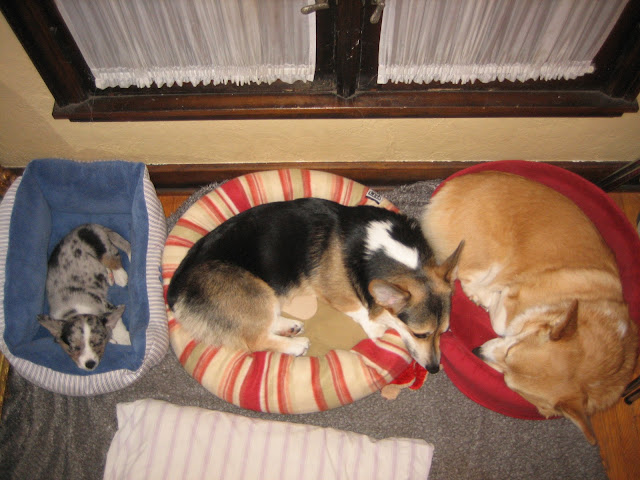 “I’ve been training Ingrid in obedience and agility since she was six months old.”

(Looks as though her brothers have her well trained in the art of napping). 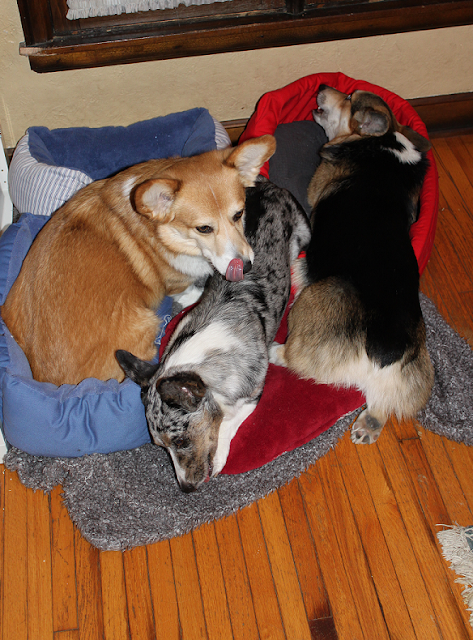 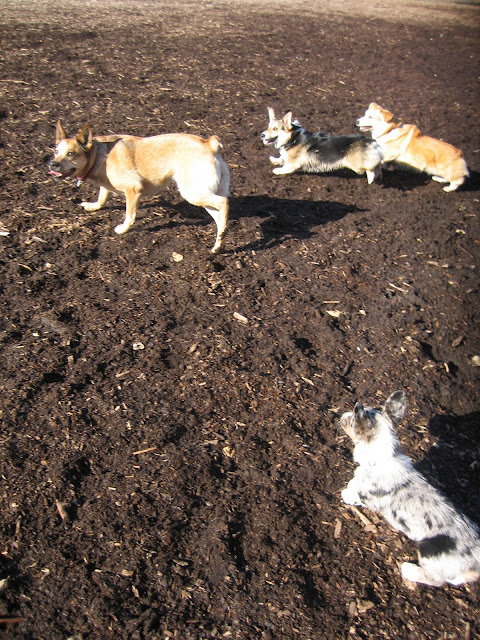 Mixing it up with the (other) big dogs. 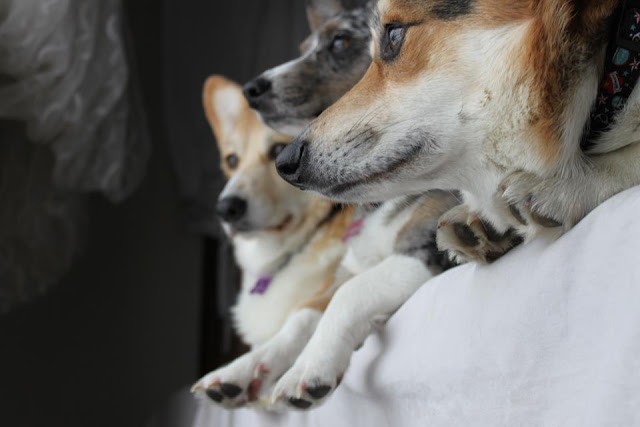 Corgi mind-meld times three!
“In May of 2010, I found myself unemployed. I began filling my days with fostering dogs, and along came Cal.” 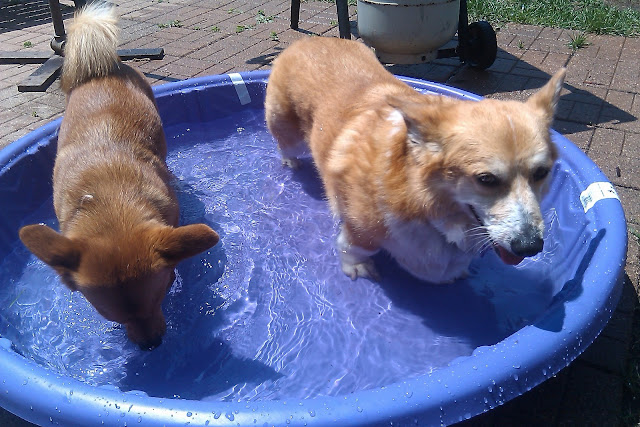 Cal and Baxter:  pool par-tay!
“Cal is our foster failure;  that’s what it’s called when you foster a dog and never let them move out. He’s a Corgi mix and cute as a button.”
“Thus began our adventures in fostering.” 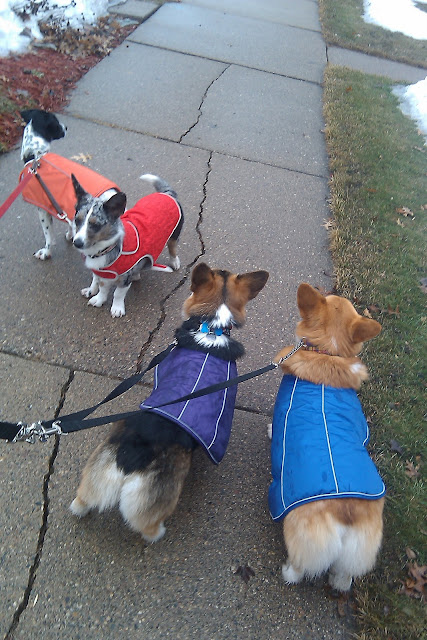 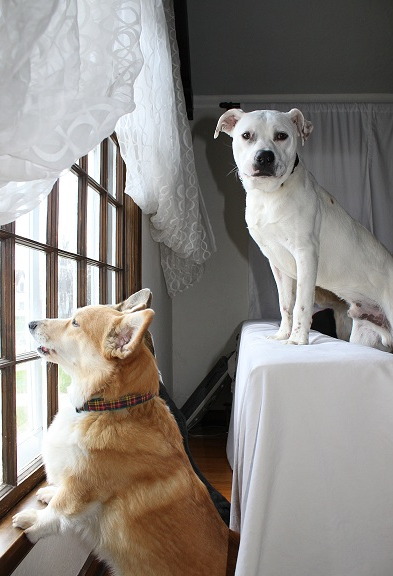 Bax on the lookout with foster brother Bingo. 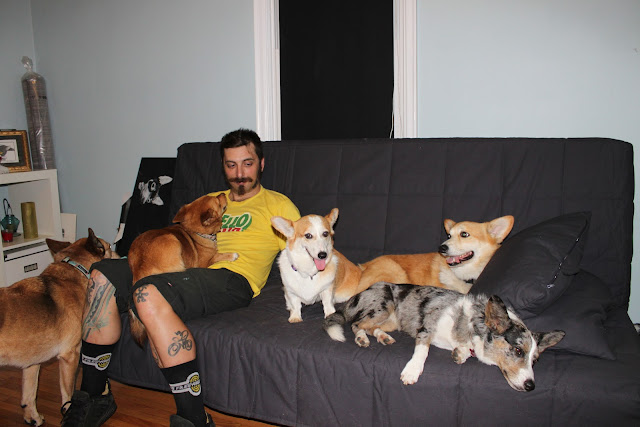 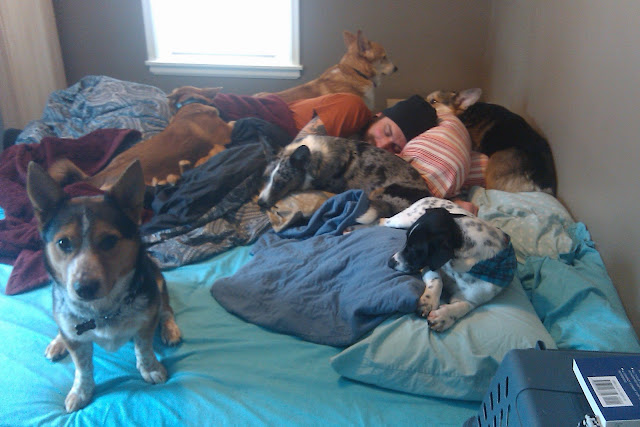 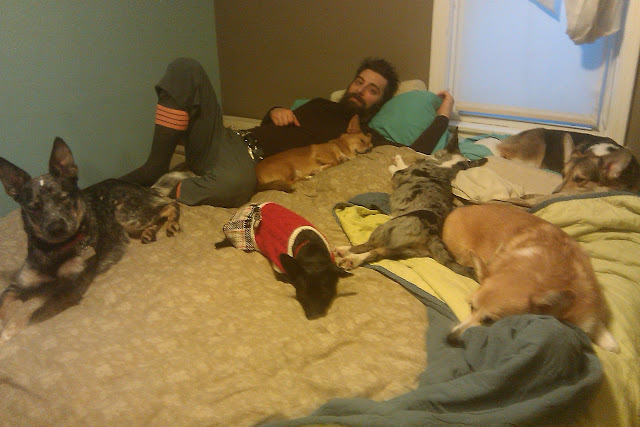 “A typical morning at the house:  Bryan with Cal, Ingrid, Alvin, Baxter, foster sister Emma, foster brother Cody.”
“Here we are, 21 foster dogs later, and despite previous attempts at taking a break, we’re now officially on one. One of our own needs us.”

“I’m tunneling to Petco!”
“Baxter went to the vet on August 17th for his annual pokes and prods. Checked out healthy as can be. About a week later, we noticed he was having problems urinating.”
“Alvin had a urinary tract infection when he was younger, and the symptoms seemed to match. We took Bax into the vet for a few more tests, all of which came back negative for any infection. The vet had given him some antibiotics in the meantime, but there was no change. Bax started exhibiting difficulty in pooping as well. It seemed to hurt him.”
“We got him back into the vet on September first for another exam and some x-rays. Still nothing.” 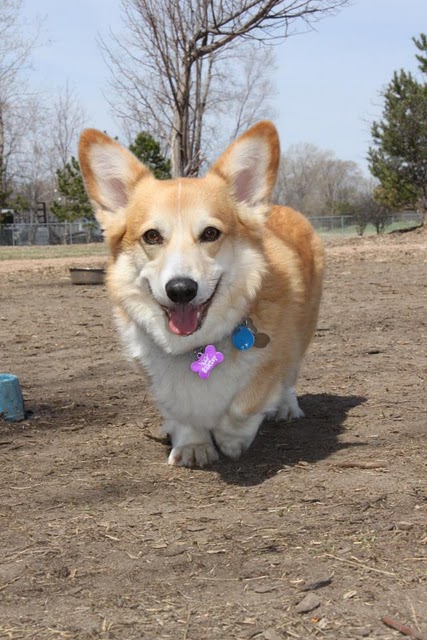 “From there an abdominal untrasound was ordered for September 8th. Everything looked as good as can be, except for his prostate, which seemed slightly enlarged.”
“They did a needle aspirate on his prostate and sent it off for testing. The word cancer was hardly uttered, the ultrasound specialist said his prostate didn’t exhibit the appearance of cancer, and he’s only four and-a-half years old.” 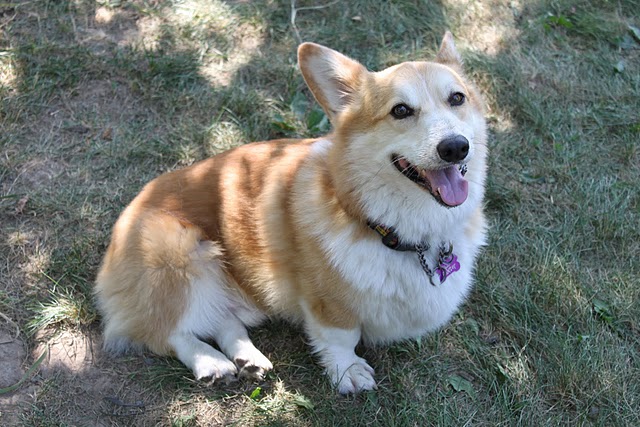 “Two days later, I got the phone call I wouldn’t wish on anybody. Bax’s results were back, and he had prostate cancer. I barely heard the rest of what was said.  I remember  the words “less than a month”, “keep comfortable”, and “euthanize”, before hanging up the phone thinking I had just a few weeks left with my best buddy.” 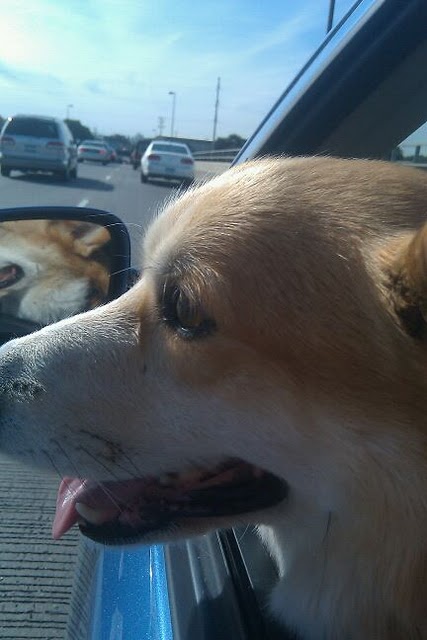 “That was Saturday. Monday rolled around, and with my head a little more clear, I called the vet and spoke with her. The prognosis for prostate cancer is bleak. Without treatment, the average life expectancy by the time symptoms appear is less than a month. Treatment is expensive, and the approach is controlling the illness, not curing it. Through chemotherapy and radiation, we might have up to another year with Baxter.” 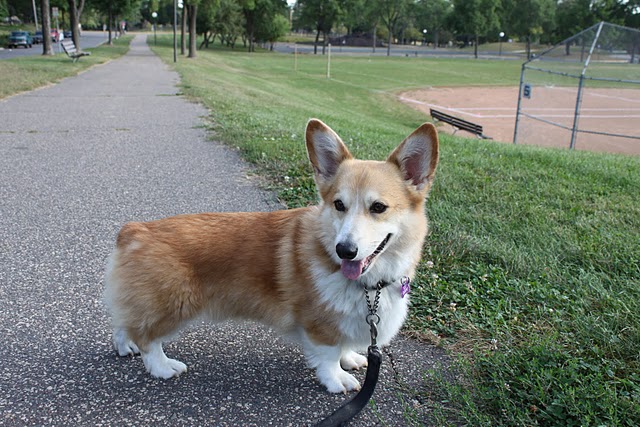 “Bax is our teddy bear Corgi. We call him “unathletic” ; ). Like those t-shirts that say Rather be Fishin’, his would say Rather be Snuggling. At the dog park he could care less about the other dogs.”
“You, though? You he wants to meet!” 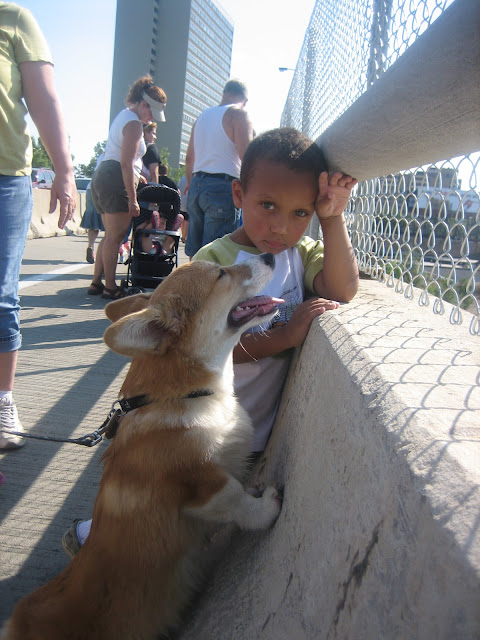 … you he wants to see smiling … 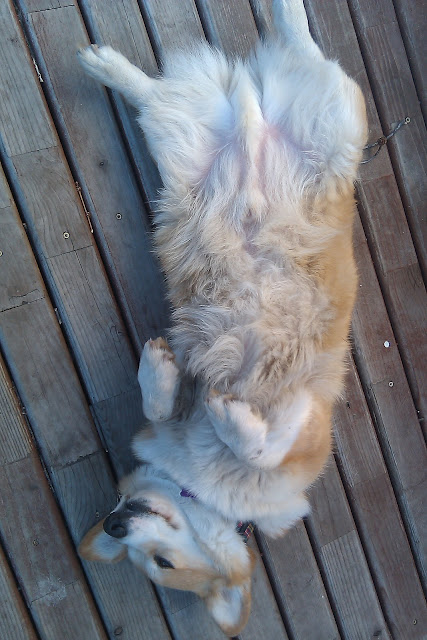 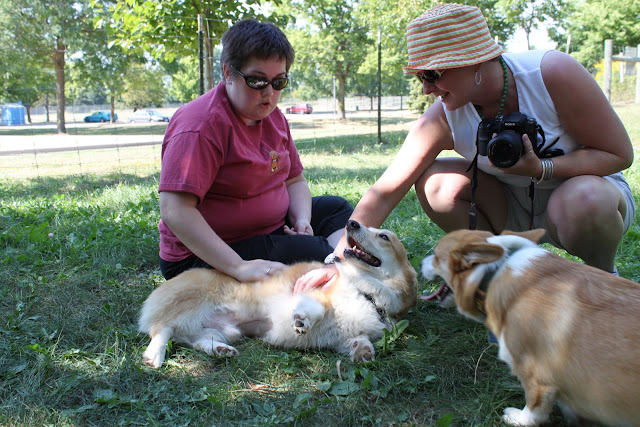 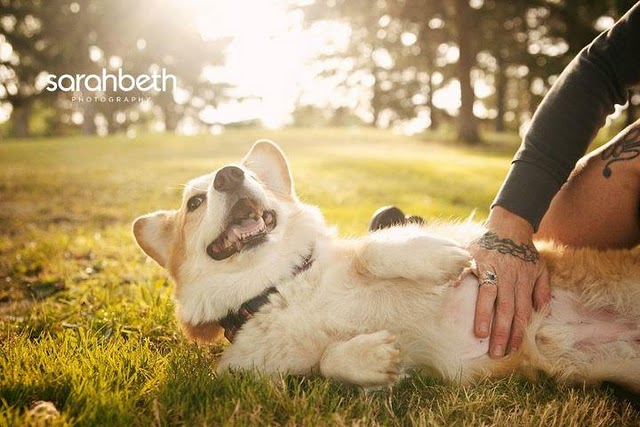 photo by Sarah Beth
“Baxter is simply the most awesome, kind-hearted, sweetest Corgi there is. “
*  *  *  *  *  *
Baxter begins chemotherapy and radiation on Monday, September 26th.  The projected cost of his treatment is estimated at $8,000.  At the time of this post, one third of that has already been raised, but there’s still a ways to go.
If you’d like to help Baxter and his family, there are several ways you can do that!
Make a financial donation:
via Baxter’s ChipIn page
via PayPal directly to Anitra:  anitra.mpls@gmail.com
via check made payable to Anitra Francis
Mail to:
CorgiPals, Inc.
PO Box 21504
St. Paul, MN 55121
Come down for the fun on the afternoon October 8th at Baxter’s Dog Wash/Playdate Benefit in Minneapolis!
Friend Baxter on his facebook page HERE.  Cheer him on, keep up with his adventures, and (BONUS!) get more photos of his barOoOoOoo-tiful face.  Oh, and Baxter would like as many virtuall belly rubs as he can get :-).
Everyone who “friends” Baxter by 12 PM EST on Wednesday, September 28th will be entered in a Daily Corgi giveaway for one of two doggy swag bags.  (Details on swag TBA).
Friends, anything you do to help — ANY amount of giving, prayers, well wishes, virtual belly rubs and expressions of support — truly matters.
Love and Biscuits!
Laurie

Ten year old Frankie stakes out his favorite spot on the couch. Flooftastic.   Jasper still looks a lot like a puppy, but he ... END_OF_DOCUMENT_TOKEN_TO_BE_REPLACED